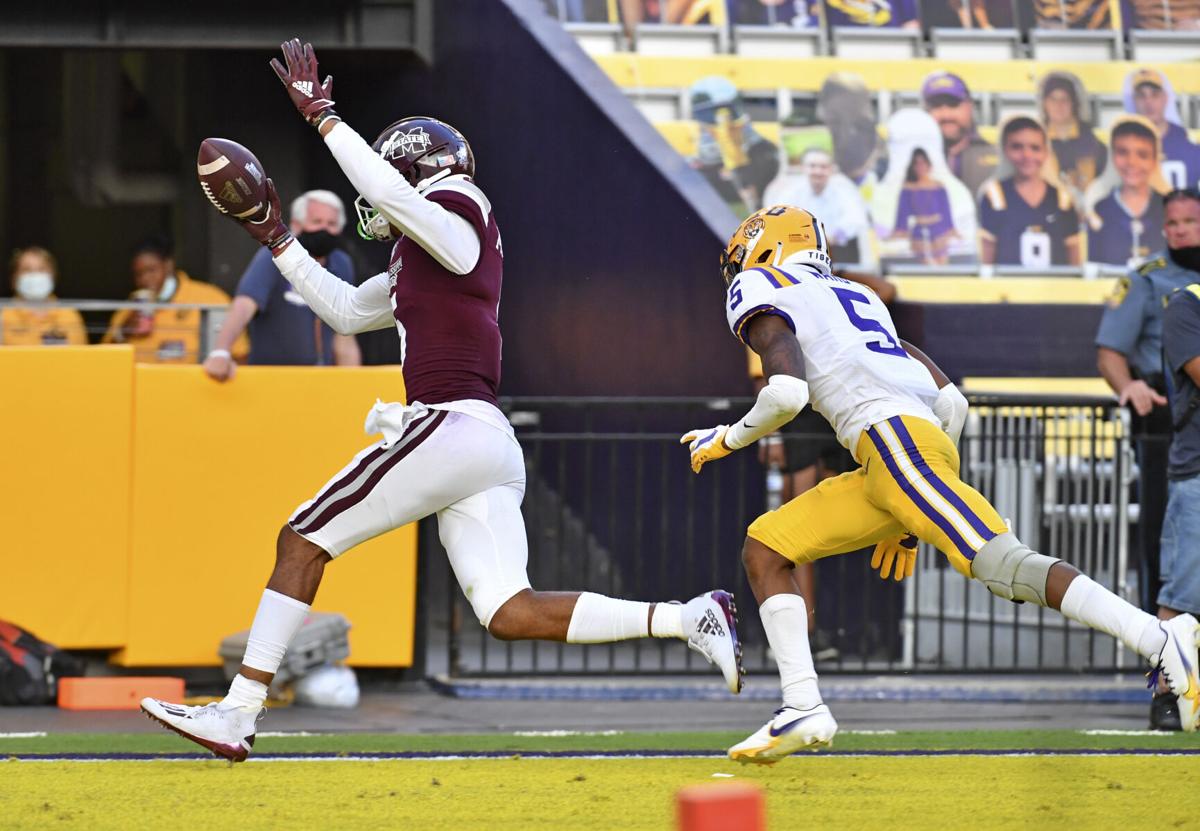 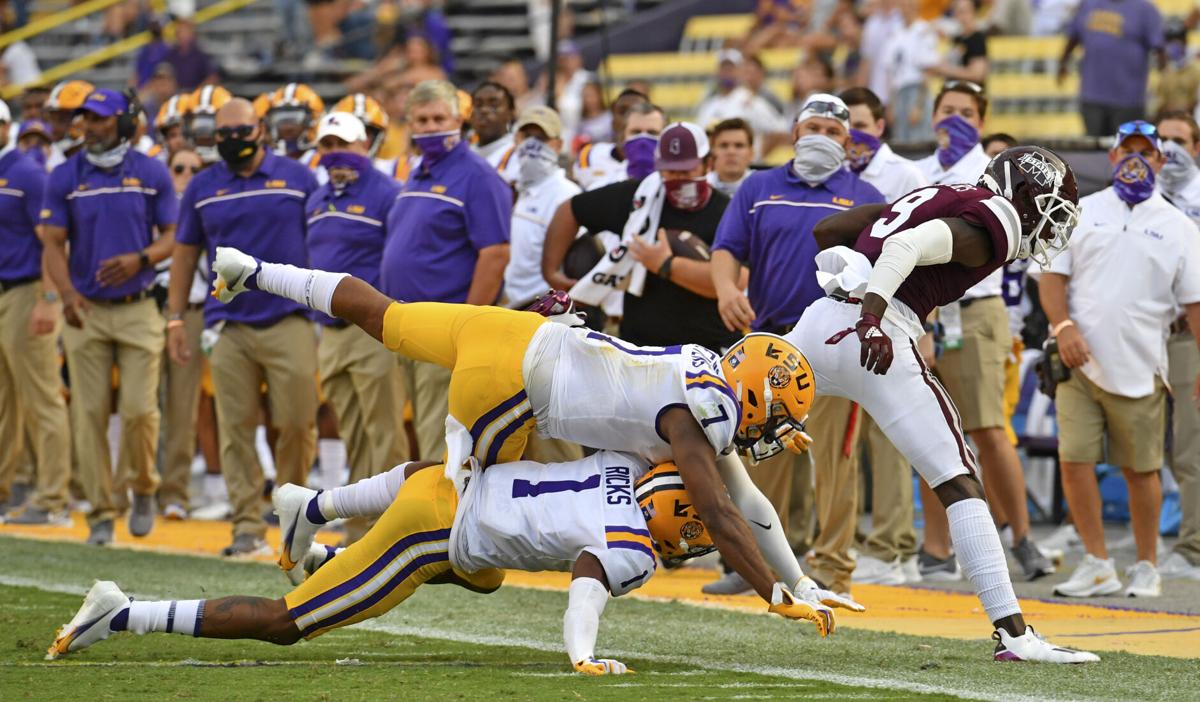 Mississippi State wide receiver Tyrell Shavers (9) is forced out of bounds on the carry by LSU safety JaCoby Stevens (7) and LSU cornerback Eli Ricks (1) in the second half of the Tigers' home opener against Mississippi State during the coronavirus pandemic, Saturday, September 26, 2020, in Baton Rouge, La. Mississippi State won 44-34. 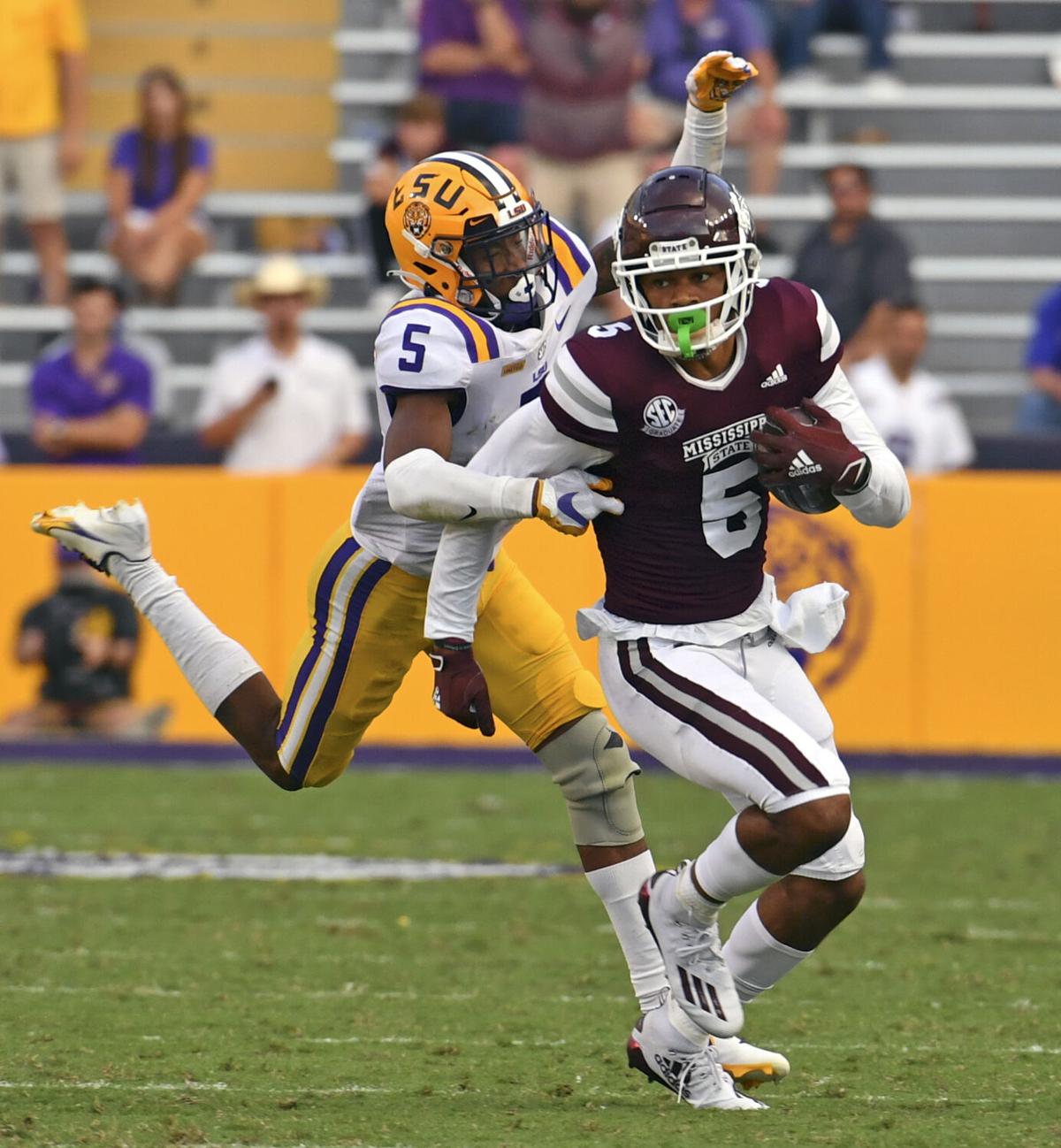 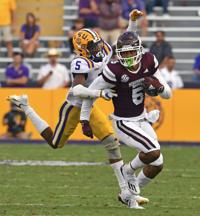 Mississippi State wide receiver Tyrell Shavers (9) is forced out of bounds on the carry by LSU safety JaCoby Stevens (7) and LSU cornerback Eli Ricks (1) in the second half of the Tigers' home opener against Mississippi State during the coronavirus pandemic, Saturday, September 26, 2020, in Baton Rouge, La. Mississippi State won 44-34.

LSU allowed a Southeastern Conference-record 623 yards passing against Mississippi State on Saturday in Tiger Stadium, and while preventing such production requires the entire defense, the Tigers’ secondary struggled in a season-opening 44-34 loss.

“Embarrassing,” senior safety JaCoby Stevens said. “It’s like going into a boxing ring and getting knocked out.”

LSU had to play without sophomore All-American cornerback Derek Stingley Jr., who was hospitalized overnight Friday after becoming "acutely ill," LSU said in a statement released Saturday morning. Stingley, whose condition wasn't related to the coronavirus, was suddenly unavailable.

In a season that took an unprecedented effort to even begin, the LSU Tigers failed to deliver when the crucial moments finally arrived.

The absence of one of the best cornerbacks in college football forced LSU to rely on inexperienced players, and they faltered in man coverage. Coach Ed Orgeron said LSU had “too many missed assignments,” allowing Mississippi State players to run wide open.

“We have no excuses,” Orgeron said.

Without Stingley, the Tigers’ starting cornerbacks — sophomore Cordale Flott, graduate transfer Darren Evans and freshman Eli Ricks — had one combined career start at LSU. Evans, the player with the most experience, transferred from Nicholls State earlier this month.

“When you’re missing one of the best corners in the nation,” Stevens said, “it’s going to hurt.”

Mississippi State beat LSU with crossing routes and deep passes down the sidelines. Coach Mike Leach expected LSU to play loose coverage. When LSU instead crowded near the line of scrimmage, Leach said Mississippi State decided “we ought to go over the top.”

Rabalais: Next man up wasn't there or wasn't ready for LSU, and the Tigers finally blinked

Time and time again this crazy, bizarro world of an offseason, Ed Orgeron growled “Next man up!” and “We don’t blink!” as the questions about …

Costello picked apart the secondary. On a touchdown drive in the second quarter, he completed a 34-yard pass behind Flott. Three plays later, Costello threw a 31-yard touchdown over Evans’ head.

Sophomore Jay Ward later replaced Evans, even though Ward missed two weeks of practice before the game. Ward broke up three passes, but the substitution didn’t change much.

Costello attempted 60 passes, and three Mississippi State players — running back Kylin Hill, wide receiver Osirus Mitchell and wide receiver JaVonta Payton — each finished with over 120 yards receiving. The Tigers allowed 15 passes of at least 20 yards, often running behind receivers as the ball sailed over their heads.

“We try to keep them level-headed,” Stevens said of the young cornerbacks, “but as the game goes on, that rookie tag has to come off.”

Though Ricks caught an interception that helped LSU erase a 10-point deficit early in the fourth quarter, the secondary faltered in a tight game. With the score tied 34-34 and about nine minutes left, Costello threw passes of 18 and 37 yards to reach LSU territory. Mississippi State settled for a field goal.

With tailgating banned on campus and an announced crowd of 21,124, the atmosphere around LSU’s season-opener lacked the energy typical of a game at Tiger Stadium.

After LSU punted on its next drive, Costello threw five passes to reach the edge of the red zone. On third-and-9 after an LSU timeout, Costello threw a 24-yard touchdown to Mitchell into the back right corner of the end zone, sealing the game as Ward trailed in coverage.

In the immediate aftermath, LSU didn’t quite know the causes behind Mississippi State’s success throwing the football. Orgeron said LSU has to identify reasons for missed assignments, and while watching film, it must decide if it can play man coverage. If not, he said a program that prides itself on producing talented defensive backs may shift to zone schemes.

“That’s something we’re going to go look at Monday,” Stevens said. “The best thing we can do right now is not point any fingers.”

Stevens spoke to athletic trainer Jack Marucci in the locker room. Stevens hates to lose. He called himself a sore loser, referencing times he restarted video games as a child. Marucci, a longtime member of the program, told him an early loss can become an opportunity to improve or transform into a slippery slope, derailing a season. Stevens intends to fix the mistakes.

“We pride ourselves on being DBU,” Stevens said, “and DBU wasn’t there today.”