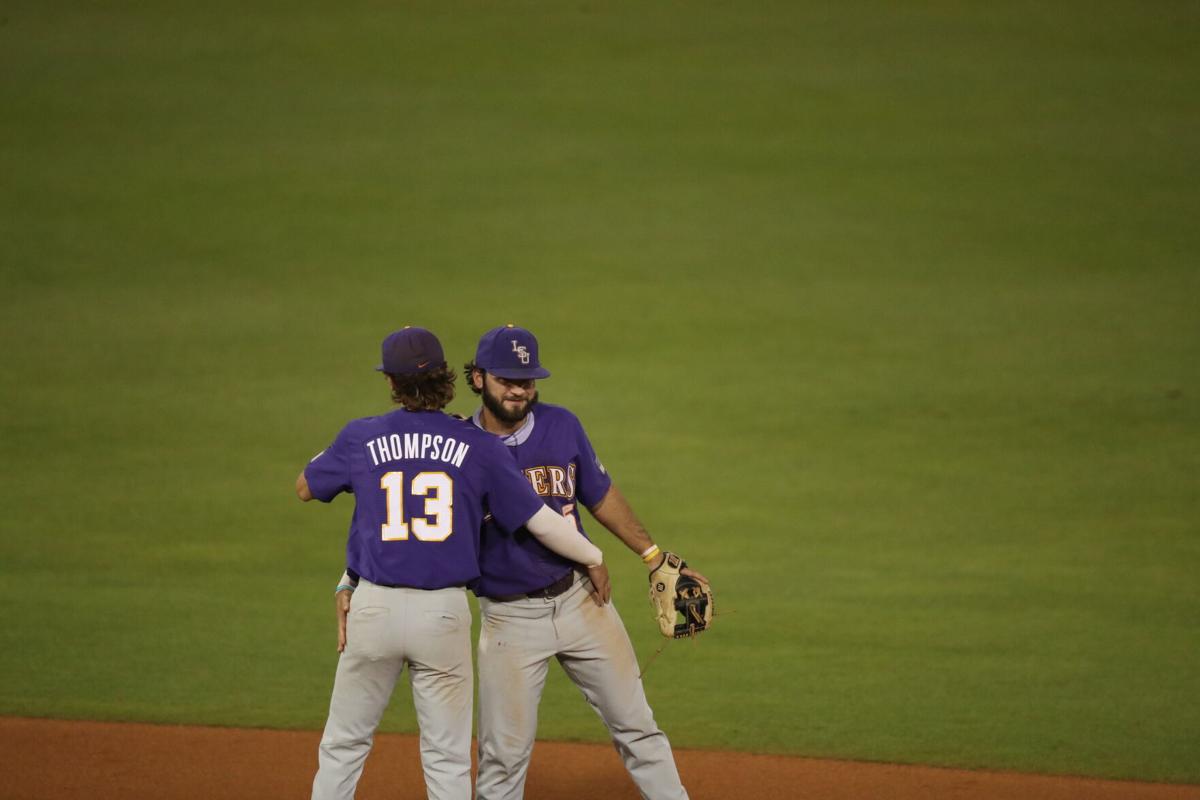 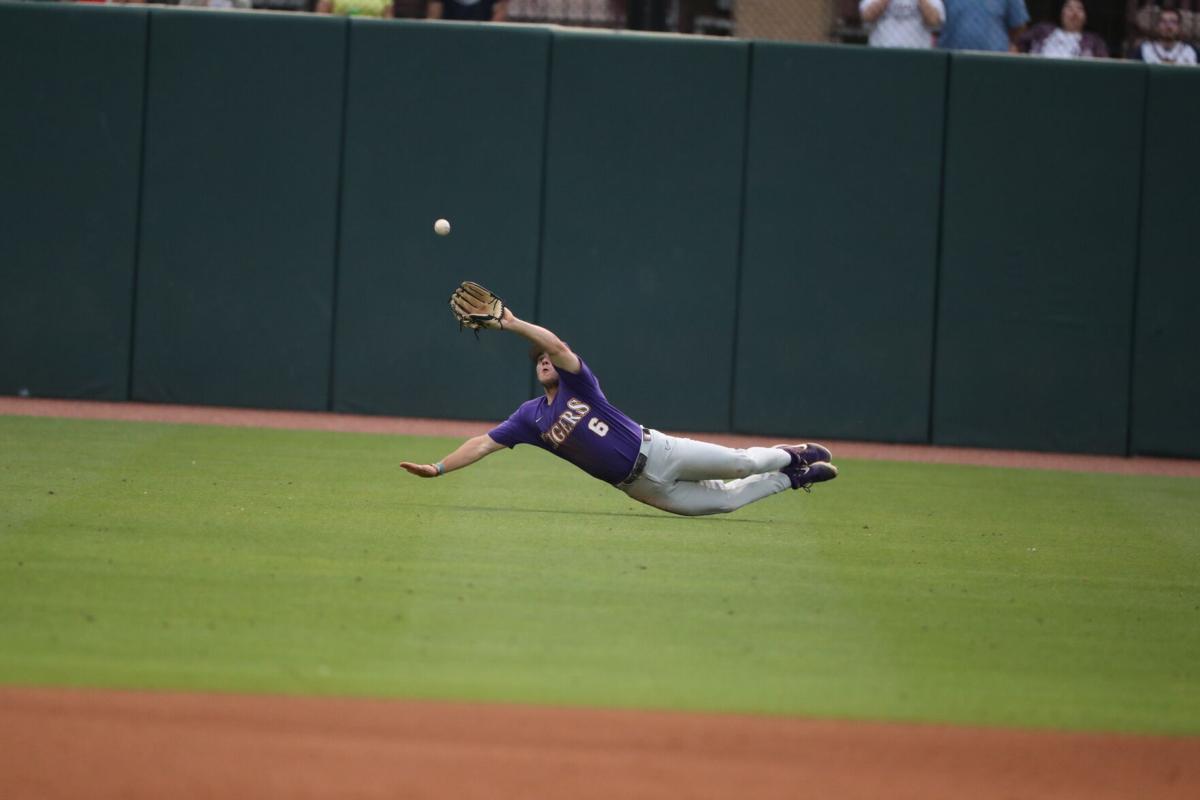 COLLEGE STATION, Texas — For so long Friday night, Zach Arnold waited inside LSU’s dugout, watching as eight innings passed without either team scoring a run. His team’s season hung in the balance. He hoped at some point he would have a chance to influence the outcome. The sophomore finally entered as a pinch hitter in the 13th inning, four-and-a-half hours after the first pitch.

LSU had loaded the bases with two outs. Two innings earlier, it missed an opportunity in the same situation when Mitchell Sanford struck out. So with Sanford’s spot due in the order and LSU facing the same left-handed pitcher as before, coach Paul Mainieri inserted Arnold, a right-handed hitter.

Arnold expected Texas A&M to throw breaking balls, which had been its strategy all night with runners in scoring position. He watched one slider land for a ball. Then he pulled another through the left side of the infield.

Two runs scored as LSU retook the lead, and Arnold pointed at LSU’s dugout once he reached first base. The Tigers leaned over the railing. They yelled and clapped while chants of “L-S-U” rang from the team's fans inside Olsen Field.

Arnold’s hit sparked a six-run outburst as LSU beat Texas A&M 12-6 in the second game of the weekend series, clinching its spot in the Southeastern Conference tournament next week. All six runs scored with two outs.

“That’s what we live for as ball players,” Arnold said. “You’re always dreaming of getting the big hit or being in that big situation and coming through for your team. I was waiting for my opportunity, and once I got it, I was lucky enough to seize it.”

Who's starting, how to watch and what to watch for in LSU's final game of the 2021 regular season.

The win prevented any chance LSU (33-21, 12-17 SEC) would miss the postseason during the final game of the regular season Saturday afternoon. It also ensured LSU held onto its chance of making the NCAA tournament, which the Tigers may be able to do by winning the series.

At the same time, Mainieri captured his 1,500th career win. He became the fifth coach in NCAA Division I baseball history to reach the milestone and win a national championship, joining Augie Garrido, Gene Stephenson, Jim Morris and Mark Marquess.

“I’ve had a lot of milestone wins because I’m old, but I’ve got to be honest with you, this one is pretty special,” Mainieri said. “You know, um…”

Mainieri paused. He rubbed his nose. Tears welled in his eyes.

“I have my son, Nick, here with me, and I thought a lot about my father,” Mainieri said. His father, Demie Mainieri, won 1,012 career games as a junior college coach.

“I can tell you this: I haven’t won any games. It’s the players who have won the games. I’ve been very blessed for 39 years to be surrounded by an awful lot of great kids."

In the fifth inning of LSU's 2-1 loss to Texas A&M, Dugas collided with center fielder Drew Bianco as they chased a ball dropping toward the warning track.

It wasn’t easy for Mainieri to reach the accomplishment or for LSU to extend its season. Texas A&M (29-26, 9-20) scored six runs against starter AJ Labas, who lasted 1 ⅓ innings. Labas has now allowed 25 earned runs over his last four starts. This marked his shortest outing of the season.

But LSU’s bullpen prevented Texas A&M from scoring another run. Senior Aaron George finished the second inning. Freshman Michael Fowler completed two scoreless frames, and when he loaded the bases with one out in the fifth, freshman Ty Floyd retired the next two hitters.

Floyd carried LSU through the eighth inning as he made his second-longest appearance this season. Freshman Garrett Edwards replaced him and delivered two scoreless innings. Then senior Devin Fontenot entered in the 11th.

Fontenot retired nine of the 10 batters he faced. The only one who reached base did so on an intentional walk.

“We really had to come out for our pitchers,” sophomore third baseman Cade Doughty said. “They did a fantastic job keeping it close.”

LSU could miss the SEC tournament. It could also finish 8th. Here's how

The Tigers entered their final series 11-16 in the SEC and need one win to move onto the league tournament.

With LSU trailing 6-2 in the second, the 11 ⅔ scoreless innings gave its offense time. LSU tied the game with two outs in the fifth when Sanford hit an RBI single and Doughty crushed a three-run homer. Then eight innings passed as each bullpen created wasted opportunities with runners in scoring position.

At last, LSU’s rally began in the 13th inning when sophomore catcher Alex Milazzo walked with one out. After Tre’ Morgan singled and Dylan Crews flew out, Texas A&M intentionally walked Gavin Dugas, who homered in the first inning, to load the bases with two outs.

Arnold grabbed a bat and swung a few times in the on-deck circle before he faced Chandler Jozwiak. He had six hits during conference play. Neither team had scored in almost three hours.

Arnold changed that. Then Doughty drilled a two-run double, and freshman pinch-hitter Brody Drost added insurance, giving Fontenot plenty of support as he sealed the win.

LSU had entered the game teetering on the brink of elimination after losing the series opener while Auburn approached a sweep of Missouri. It took 13 innings, but LSU secured its spot in the conference tournament. Now it can aim for the NCAA field in its final game of the regular season.

“We’re going to fight it until the end,” Fontenot said. “We knew what was on the line. We put the cleat on their throat and kept on going.”

In the midst of LSU's 2-1 loss Thursday night, two starters left with injuries that could keep them out the rest of the series.