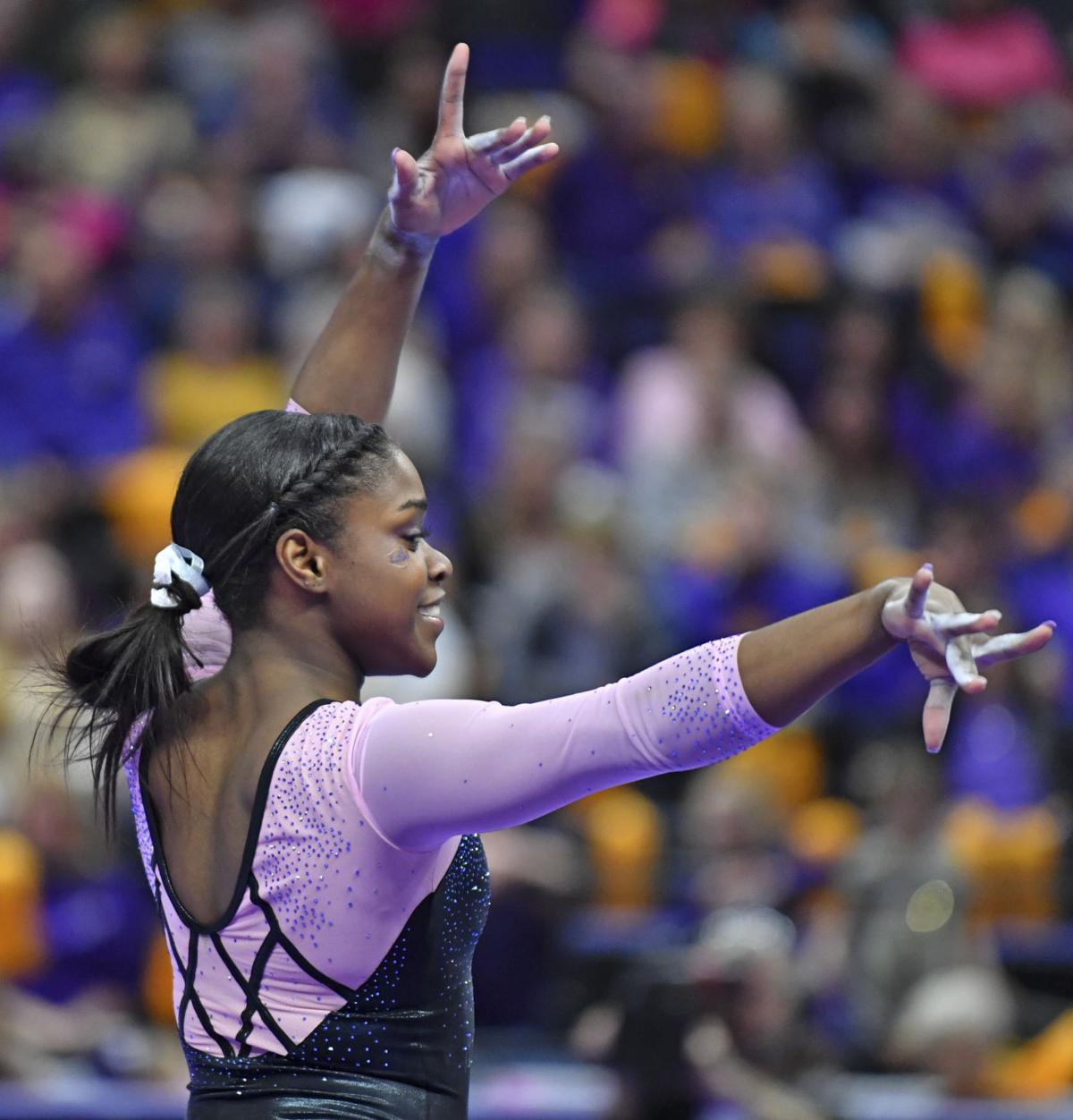 LSU freshman Kiya Johnson performs her floor routine in the Tigers’ meet against Auburn, Friday, January 17, 2020, at the Pete Maravich Assembly Center in Baton Rouge. Johnson scored a 9.975 in the event. 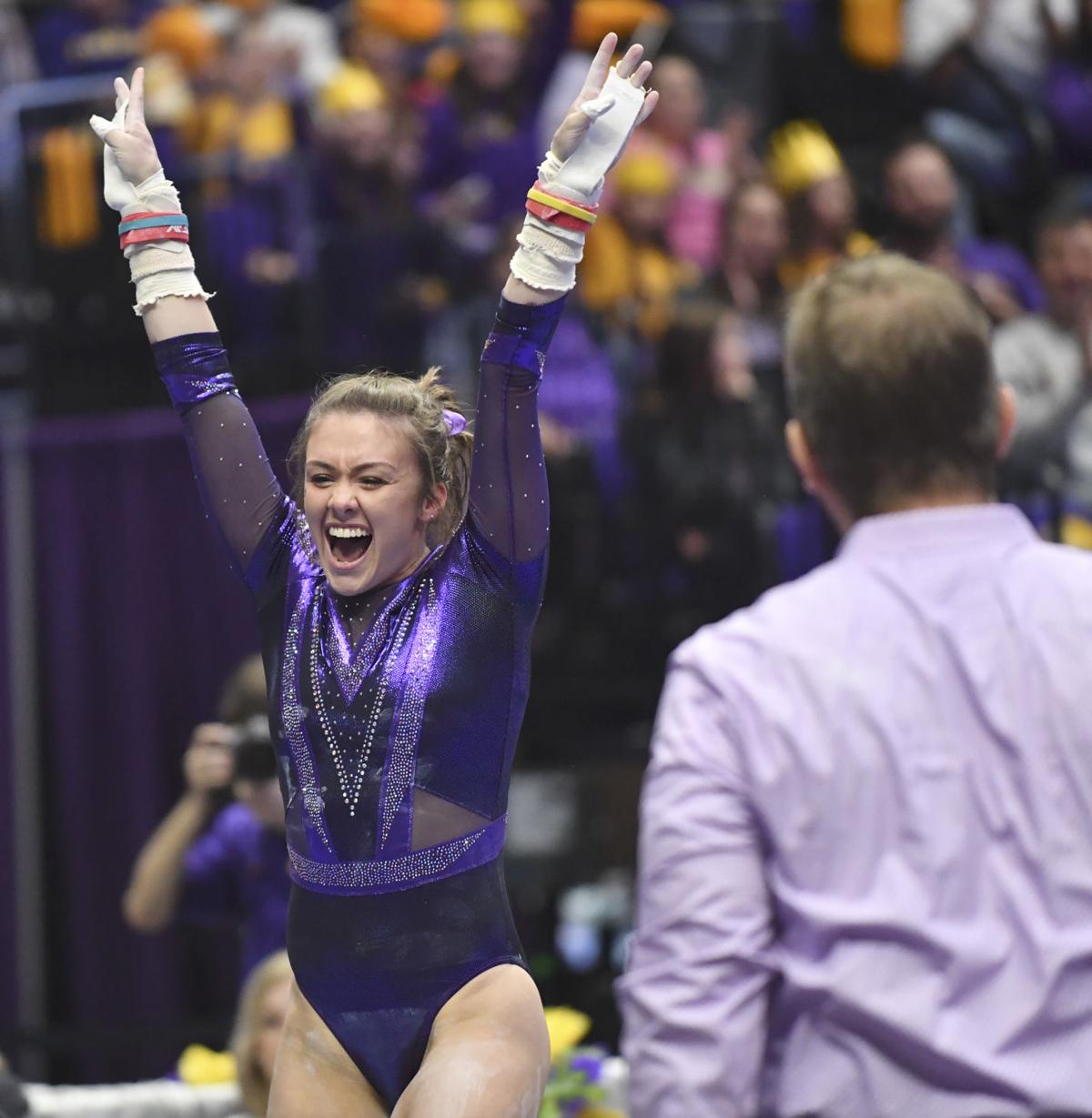 LSU senior Ruby Harrold celebrates after sticking the landing on uneven bars in the Tigers' season opener against Arizona, Friday, January 3, 2020, at LSU's Pete Maravich Assembly Center in Baton Rouge. Harrold scored a 9.875 in the event.

LSU freshman Kiya Johnson performs her floor routine in the Tigers’ meet against Auburn, Friday, January 17, 2020, at the Pete Maravich Assembly Center in Baton Rouge. Johnson scored a 9.975 in the event.

LSU senior Ruby Harrold celebrates after sticking the landing on uneven bars in the Tigers' season opener against Arizona, Friday, January 3, 2020, at LSU's Pete Maravich Assembly Center in Baton Rouge. Harrold scored a 9.875 in the event.

It was a night of great performances, an amazing milestone and a couple of stinging disappointments for the No. 8-ranked LSU gymnastics team Friday at No. 2 Florida.

The Tigers posted their best score of the season by more than a full point with a 197.775 , one of the top-five scores in the nation this season. But Florida was even better, recording the nation’s second-best score of 2020 with a 198.375 to win their Southeastern Conference showdown with the Tigers.

Florida stayed unbeaten and in first place overall in the SEC at 3-0. LSU slipped to 3-1 and 2-1.

A bigger loss for LSU than the final score was a left ankle injury to Sarah Edwards. The Tigers junior, who won vault last Friday at home against Auburn with a 9.95, had to stop midway through her floor routine. She was carried off by a trainer as a packed pro-Florida crowd in Exactech Arena applauded sympathetically.

“It could be any number of things,” LSU co-head coach D-D Breaux said of Edwards’ injury. “We’re hoping it’s just a sprain.”

On balance it was a night filled with great individual performances for the Tigers, led by a 10 on balance beam for freshman Kiya Johnson.

It was the first perfect score for an LSU freshman since Nicki Butler in 2004.

After years of being dominated by veterans like Sarah Finnegan, Lexie Priessman and McKenna Kelley, the LSU gymnastics program is in the throe…

“We knew Kiya was great” when LSU recruited her, Breaux said. “But her competitiveness week in and week out is amazing. She’s a great 1-2 punch with Kennedi (Edney).”

Both teams started strong in the first rotation with season highs: LSU with a 49.425 on bars and Florida with a 49.400 on vault. After four straight 9.85s, Edney and fellow senior Ruby Harrold finished with a 9.90 and 9.975, respectively. The latter marked Harrold’s career high on bars.

Harrold threw another career high on vault, tying for first place in that event with Edney, the two-time NCAA vault champion, at 9.95. Harrold finished the night with a 9.80 on floor.

“She had a fantastic night,” Breaux said of Harrold. “She nailed her vault and her bar routine was fabulous.”

Edwards, who went third in LSU’s floor rotation, was obviously in pain after completing her second pass. She tried to continue but eventually had to take a seat next to the floor mat. Because she completed part of her routine, Edwards got a 2.0.

“It wasn’t a bad landing,” Breaux said. “She showed really good skill. This hits us in the gut because she’s one of our best vaulters.”

After a lengthy delay, junior Reagan Campbell had a couple of wobbles that led to a 9.775 before Edney and Johnson finished with a 9.90 and 9.975, respectively. Johnson, who was a question mark going in on floor with an Achilles’ tendon flare up, equaled her career high on the event she set the previous week at home against Auburn, helping LSU to a 49.250.

Florida was nearly a half-point ahead going into the final routine, a big margin in college gymnastics. But LSU finished strong with a 49.525, led by Johnson’s perfect score. Edney also had a 9.925 and junior Sami Durante a 9.90.

“There were a lot of great things,” Breaux said. “The fight was the most important part. At no point did these kids fold. They continued to push and give 100 percent, and their performances reflected that. It was a great meet.”

The Tigers return home to the Pete Maravich Assembly Center next Friday to host Alabama. First vault is set for 7:15 p.m. on the SEC Network.