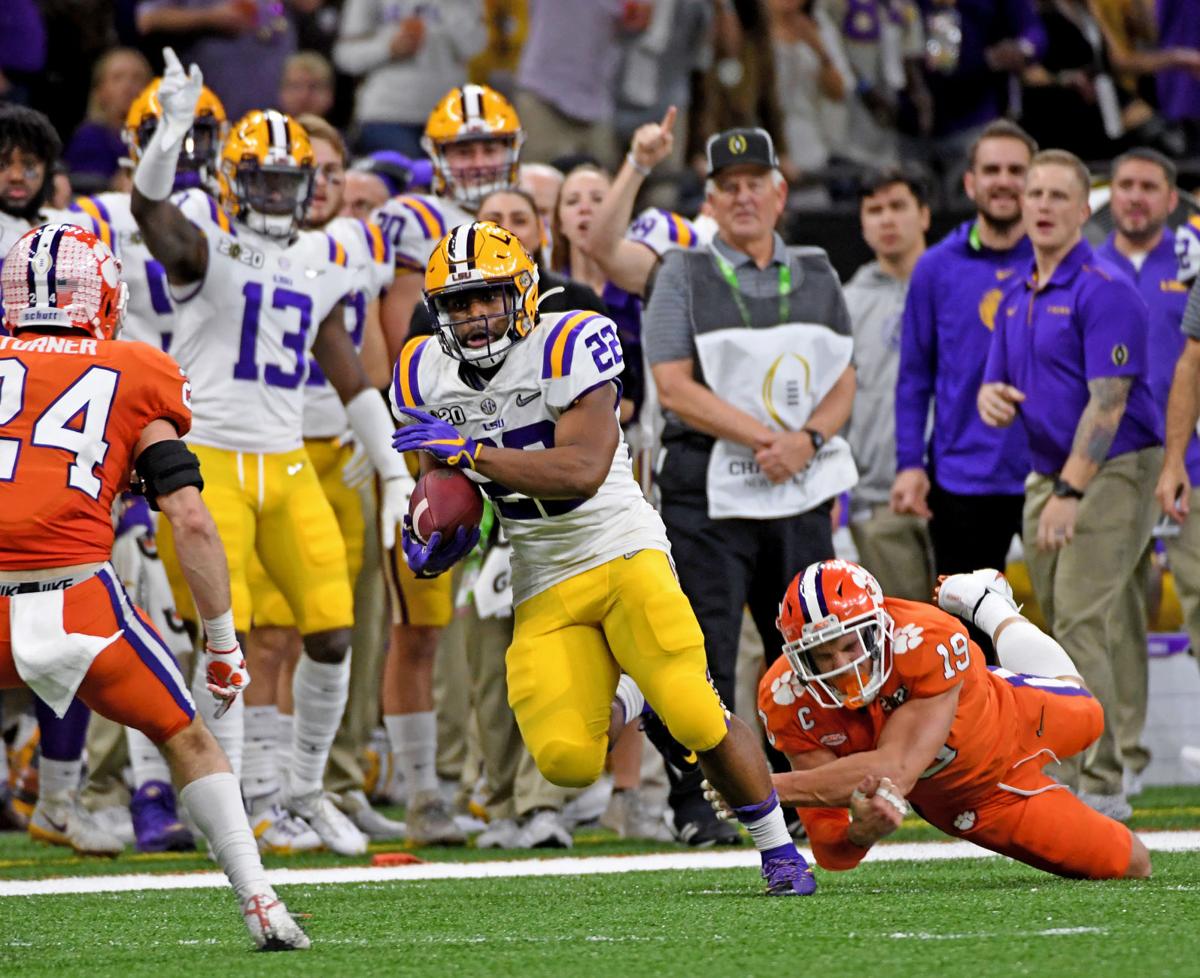 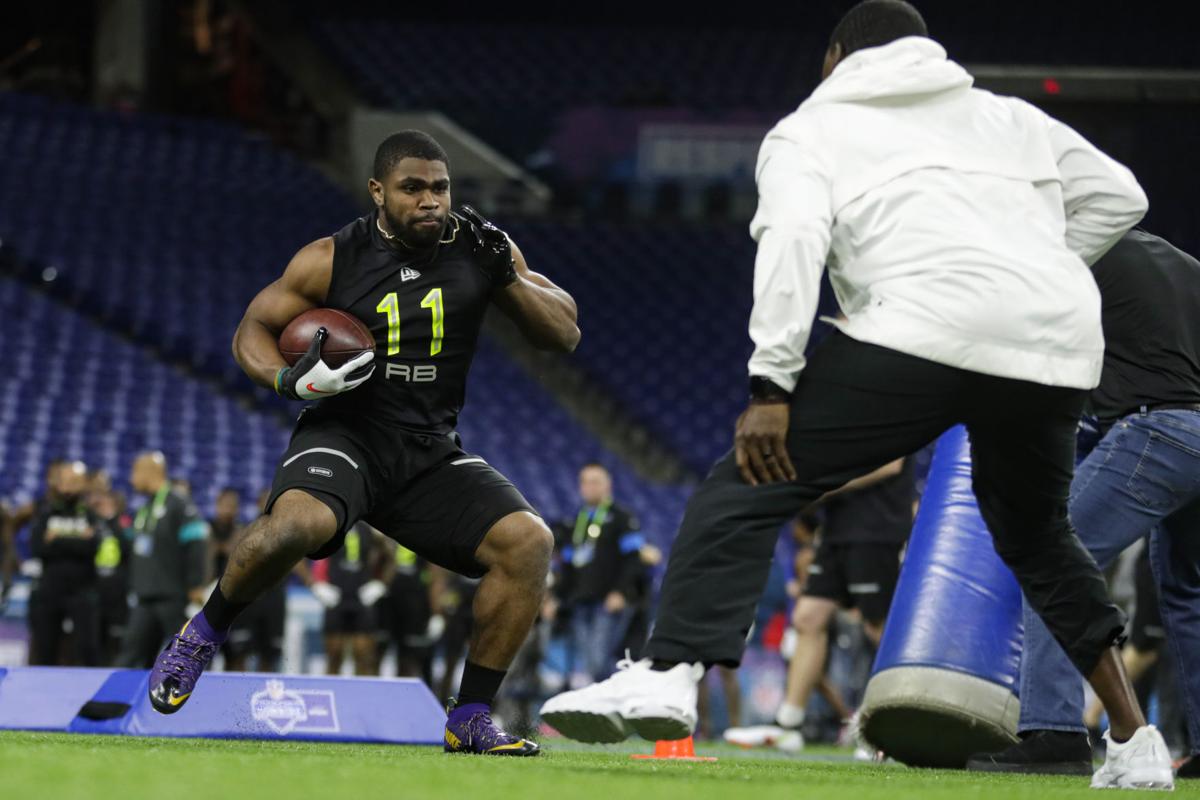 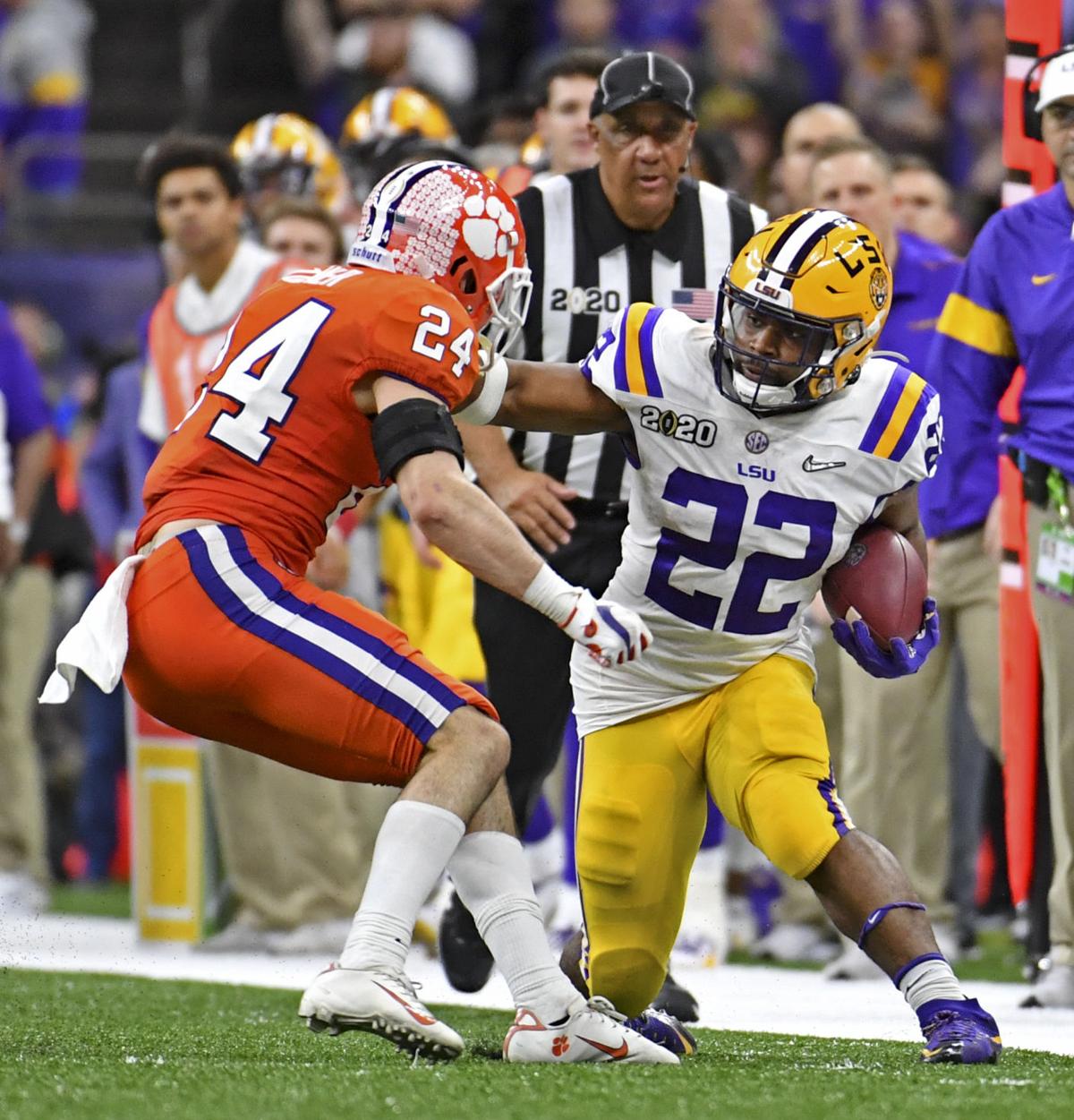 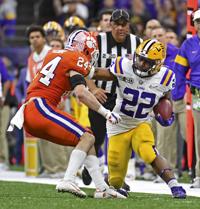 LSU running back Clyde Edwards-Helaire (22) stiff-arms Clemson safety Nolan Turner (24) in the second half against Clemson in the CFP National Championship Game, Monday, January 13, 2020, at the Mercedes-Benz Superdome in New Orleans. 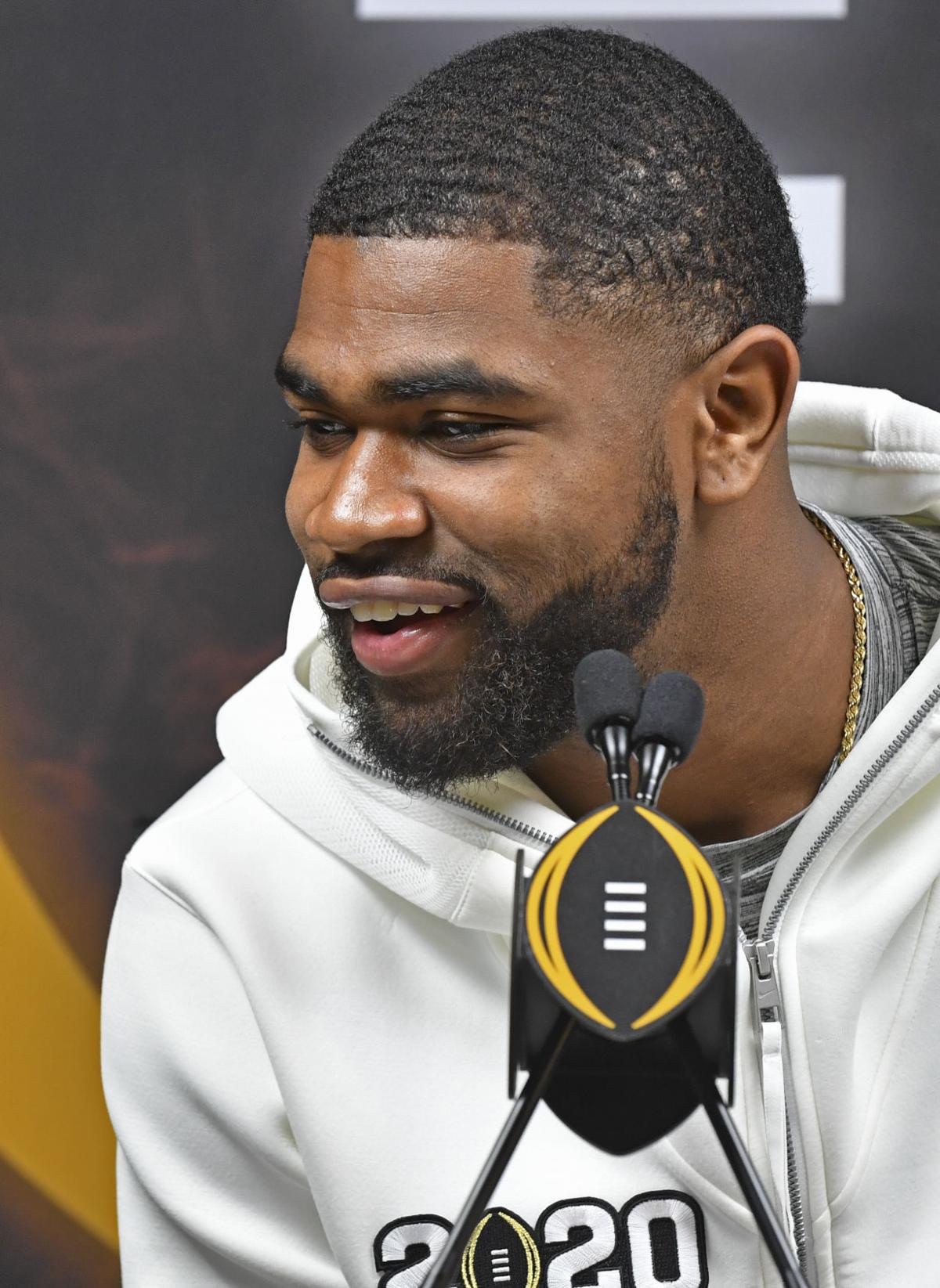 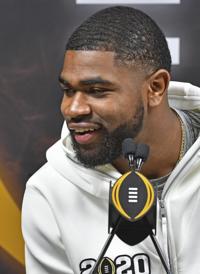 LSU running back Clyde Edwards-Helaire (22) stiff-arms Clemson safety Nolan Turner (24) in the second half against Clemson in the CFP National Championship Game, Monday, January 13, 2020, at the Mercedes-Benz Superdome in New Orleans.

Kansas City Chiefs general manager Brett Veach texted his quarterback, Pat Mahomes, to gauge his thoughts on who the team should select with their first-round pick.

When the time came for the 32nd and final pick of Thursday’s first round of the NFL draft, the reigning Super Bowl champions had their man, scooping up the LSU and Catholic High star ahead of such highly regarded running back prospects like D’Andre Swift of Georgia and Wisconsin’s Jonathan Taylor.

“Once I heard it was the Chiefs,” Edwards-Helaire said, “my heart just dropped.”

LSU bookended the first round of the NFL draft. The first pick was obvious, the final one was not.

Once he heard about what Mahomes said, his heart was full.

“It just made me feel wanted,” Edwards-Helaire said. “I immediately thought of the competition and how intense everything would be. But I’m more than happy. This is a franchise that just won the Super Bowl. It’s time to go in and work immediately. I like working.

“They drafted a great guy.”

This is hardly the end of the Edwards-Helaire football story, but it is an amazing, unlikely exclamation point.

A year ago, Edwards-Helaire was exiting LSU spring practice as the starting tailback. But a lot of wise guys (OK, me) figured he would melt in the summer heat from the onslaught of talented freshman like John Emery and Tyrion Davis-Price. Surely by midseason at worst, Clyde would get relegated to a backup role.

It never happened. To pinch a couple of likes from the English football movie, “The Damned United,” Heisman Trophy-winning quarterback Joe Burrow was the shop window, the razzle and the bloody dazzle.

But Edwards-Helaire was the goods in the back. The do everything tailback who rushed for 1,414 yards (third most in a season in LSU history) and did so much more. Blocking and pass catching, often splitting out to the boundary as the widest receiver in the Tigers’ devastating five-wide sets.

It was that versatility that attracted the Chiefs, and made Edwards-Helaire more glamorous than the razzle (Swift, who went with the second pick of the second round Friday to Detroit) or the dazzle (Taylor, who went 41st Friday to Indianapolis). To say he should click like a well-oiled latch into Kansas City’s imaginative and prolific offense puts the “un” in understatement.

“His interior running ability, his vision and instincts are rare and unique,” Veach said. “The guy kind of has the ability to play the game in slow motion. Lateral agility, vision, the ability to start, stop and redirect his hands out of the backfield. Some guys had one trait, some had another, but we felt like he had them all.

“I told coach (Andy Reid), ‘Wait until you finish up your work on Clyde Edwards-Helaire. He’s going to remind you of (ex-Philadelphia running back) Brian Westbrook.’ Coach called me back and said, ‘He’s better than Brian.’ ”

Edwards-Helaire is used to the comparisons and eclipsing them. Catholic High coach Gabe Fertitta, the Bears’ offensive coordinator with Clyde before he went to LSU in 2017, recalled a comparison between him and former Catholic and LSU running back star Derrius Guice.

“I remember our (CHS) president, Mr. Gene Tullier, stopped me in the hallway 2-3 weeks into spring practice when I first got there,” Fertitta said. “He asked about Derrius and I said, ‘Derrius is unbelievable. He’s going to have a great career in the NFL. But I tell you what, this little sophomore Clyde will play a long time in the NFL.’ ”

Running backs once ruled the first round of NFL drafts. But Edwards-Helaire was the first one taken this year after six wide receivers — including LSU’s Justin Jefferson with the 22nd pick to the Minnesota Vikings — went off the board.

“Running back isn’t as valued as it used to be,” Fertitta said. “People who play that position need to be able to do a lot of different things. He can do everything. We put him in the slot and Derrius in the backfield all the time. And Clyde played some wildcat quarterback for us. Clyde’s game is tailor-made for what the NFL is now, especially the Chiefs and all the creativity they have.”

Represent the Tigers' new NFL teams with these jerseys, hats and more

The LSU Tigers made a splash in the first round of the 2020 NFL Draft, with five former players selected.

Edward-Helaire’s size (he measured at 5-foot-7, 209 pounds at the NFL combine) would seem to have worked against him. But the underdogs try harder, don’t they? He worked his way, literally, into the first round.

“Clyde and I and a lot of offensive guys off the team his senior year talk about L.U.C.K.,” Fertitta said. “That’s Labor Under Correct Knowledge. I text Clyde all the time and say, ‘Good luck,’ and he says, ‘L.U.C.K.’

“The guys who are the luckiest tend to work the hardest.”

“I can’t express how much I really appreciate it,” Edwards-Helaire told the Chiefs’ brass in a video call after his selection Thursday. “You got the hardest worker in the draft.”

“We know that,” Reid replied.

Let there be no doubters anymore. He may not have size, but Edwards-Helaire is a self-made man who has made it big.

As the 2020 NFL Draft continued Friday night, LSU set a new school record for overall draftees — and inched closer to the highest total in mod…