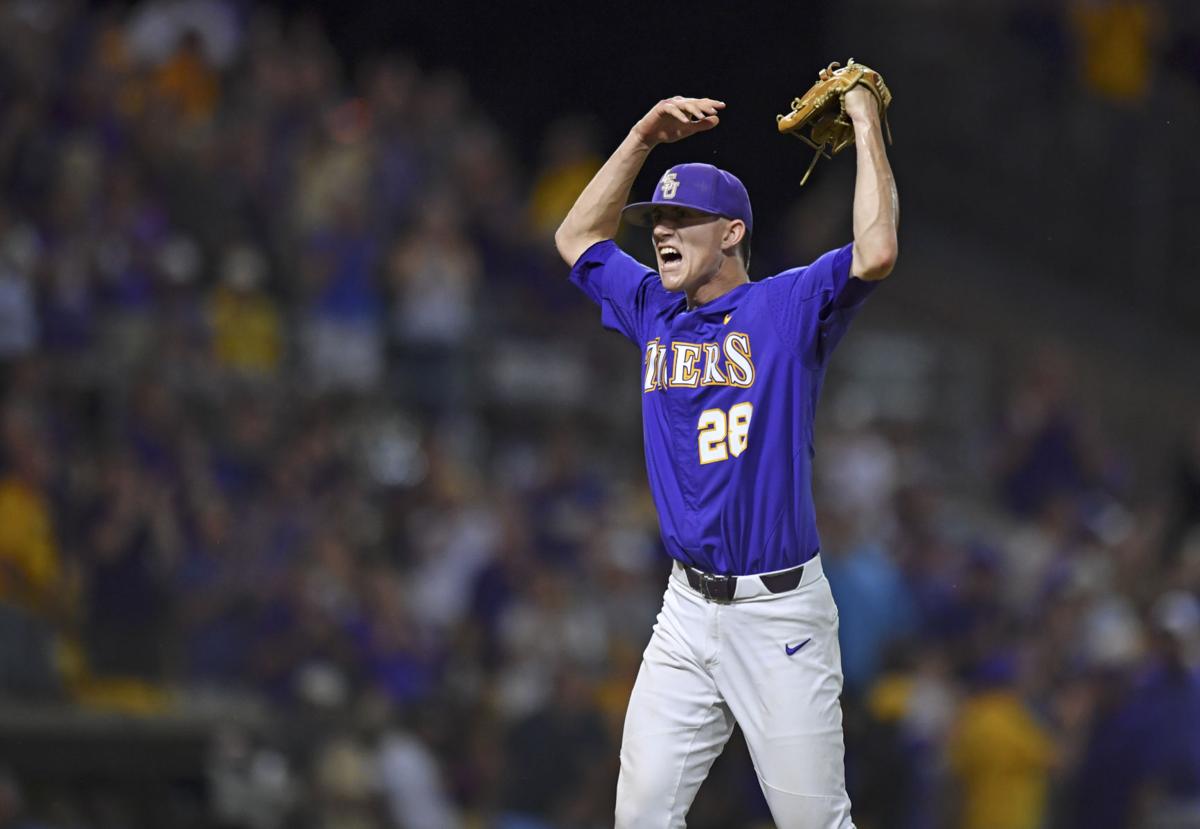 LSU pitcher Devin Fontenot (28) celebrates after getting the last strikeout of the eighth inning in Game 2 of the NCAA Baseball Baton Rouge Super Regional between LSU and Florida State, Sunday, June 9, 2019, at LSU's Alex Box Stadium in Baton Rouge, La. Florida State defeated LSU 5-4 in 12 innings to advance to the College World Series. 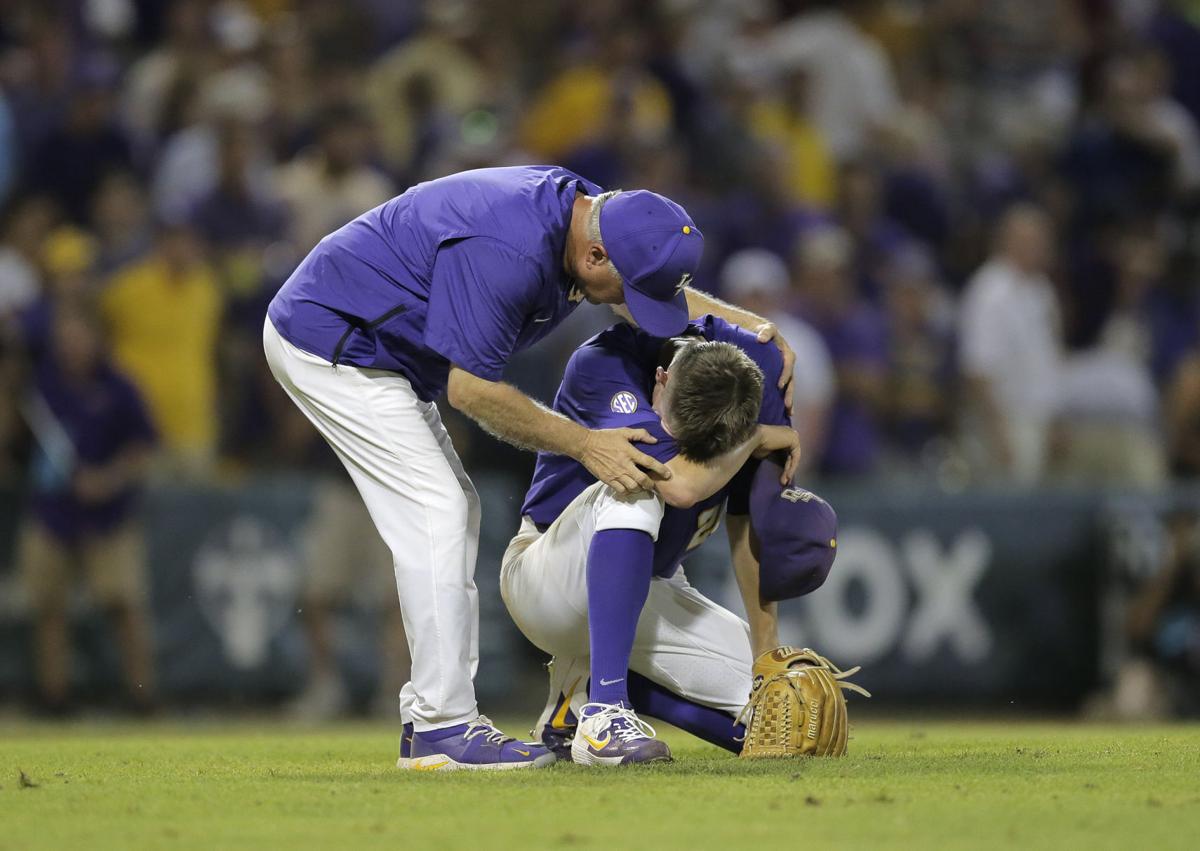 LSU pitcher Devin Fontenot (28) celebrates after getting the last strikeout of the eighth inning in Game 2 of the NCAA Baseball Baton Rouge Super Regional between LSU and Florida State, Sunday, June 9, 2019, at LSU's Alex Box Stadium in Baton Rouge, La. Florida State defeated LSU 5-4 in 12 innings to advance to the College World Series.

There knelt Devin Fontenot, his face shoved into the crook of his arm. Coach Paul Mainieri rushed to the pitcher’s side as Florida State players ran through the infield at Alex Box Stadium, tossing water and hats. Mainieri held Fontenot’s shoulders.

Fontenot had reached career-highs in strikeouts, pitches and innings during Game 2 of the NCAA Super Regional last year, giving LSU a chance to play at least one more time. Then, suddenly, Fontenot allowed the winning run to score in the 12th inning. He sobbed in front of the mound.

When the loss settled, after Florida State coach Mike Martin told Fontenot he pitched like a “warrior” and realization set in that LSU’s season had ended, Fontenot processed the heartbreak. He thought about what he had experienced. Instead of feeling succumbing to emotional pain, he tried holding onto what he accomplished.

Now approaching the season opener on Feb. 14 against Indiana, LSU expects Fontenot to anchor its bullpen. The pitcher who Mainieri once ripped during a pitching change has matured. Fontenot knows how he wants to approach every appearance during his junior season, pulling from what made him successful during the Super Regional loss.

“I think his best days are ahead of him,” Mainieri said. “I think we're going to watch him pitch in the major leagues some day.”

Before his final outing, Fontenot went through an up-and-down sophomore year. Teammates pushed him early in the season. Mainieri challenged him as hard as he had any player during his coaching career.

Fontenot found his role, but he had to regain his competitive edge when he struggled with command and flirted with disaster. Mainieri started him once, trying to remove the pressure of late-inning situations.

Inside the LSU baseball pitching lab reducing player injuries: 'I think we're onto something'

Fontenot ended up leading the team with seven saves, and during the Super Regional, he recorded his greatest performance: 6⅓ innings of relief with 11 strikeouts on 96 pitches. He did not allow a hit until the 12th inning.

Though he allowed the game-winning run that night, Fontenot pitched with energy and passion. He pounded his chest when he walked off the mound. He focused on every throw.

“I know I have the ability to do that,” Fontenot said. “I just got to do it more consistently this year.”

Understanding how to maintain success, Fontenot wants to repeat those qualities. Regardless of the situation, whether he pitches middle relief on a Tuesday night or closes games during Southeastern Conference play, Fontenot plans to approach every outing like it’s “life or death almost.”

LSU has not decided how it will use Fontenot in the bullpen. Mainieri likes the thought of having a power arm such as Fontenot, sophomore Jaden Hill or redshirt sophomore Nick Storz finish games, but if LSU finds depth at closer, it may use Fontenot in a more versatile role. He has improved his secondary pitches, which can help him go through lineups multiple times.

“His slider has really gotten better,” Mainieri said. “I think that allows him to go a little bit longer. If the changeup keeps coming around, then we'll see what the needs are as we go through the season.”

Fontenot does not care what role he fills. He knows how pivotal this year is for his draft stock, so instead of spending the summer at home in Texas, he stayed in Baton Rouge, working out as he took a class. He waited to press play.

“I'll be ready to go again,” Fontenot said. "Right where I left off.”