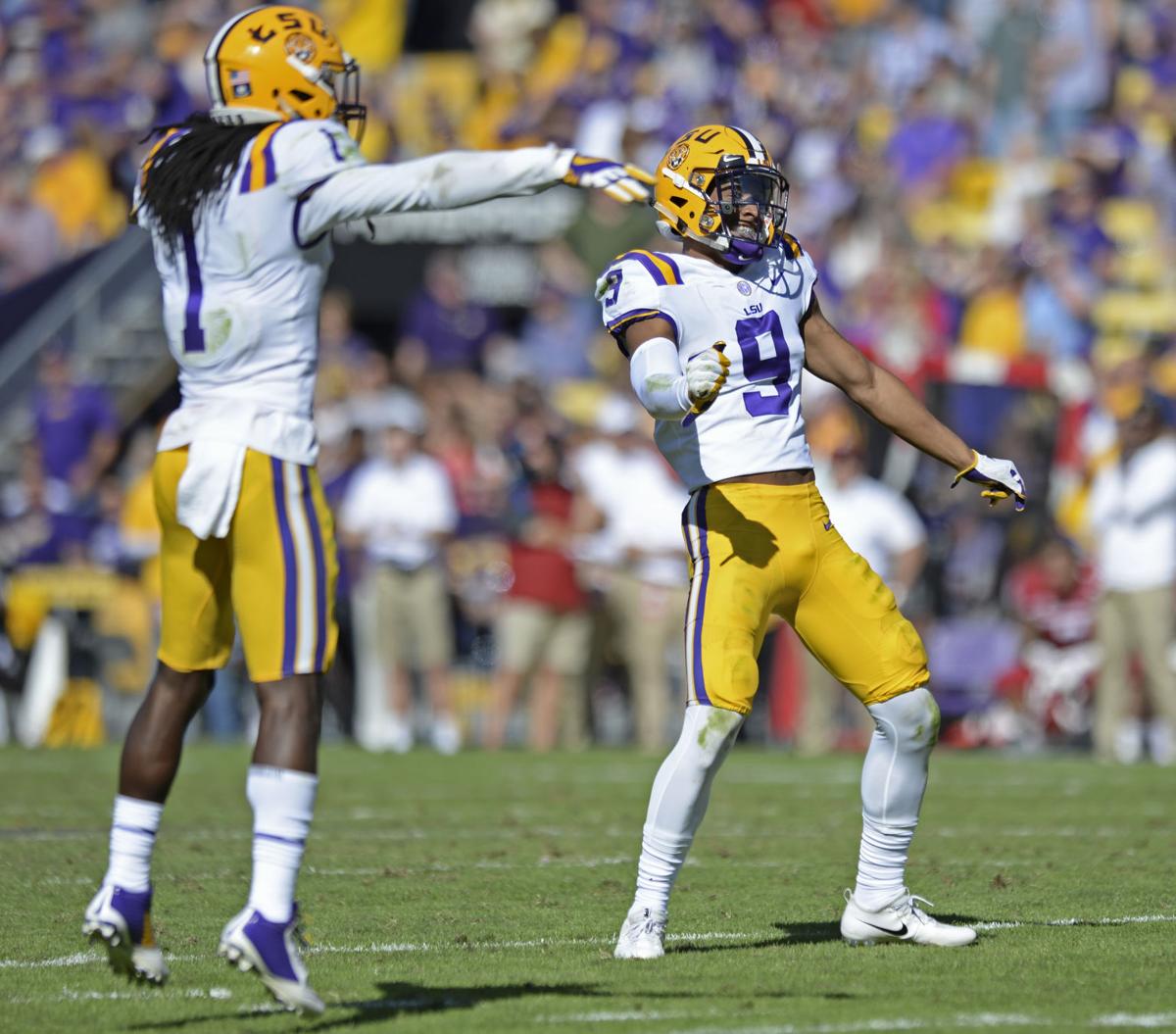 LSU defensive back Donte Jackson (1) and LSU safety Grant Delpit (9) loosen up on the field as they dance to music during a television timeout in the second half of the win over Arkansas. 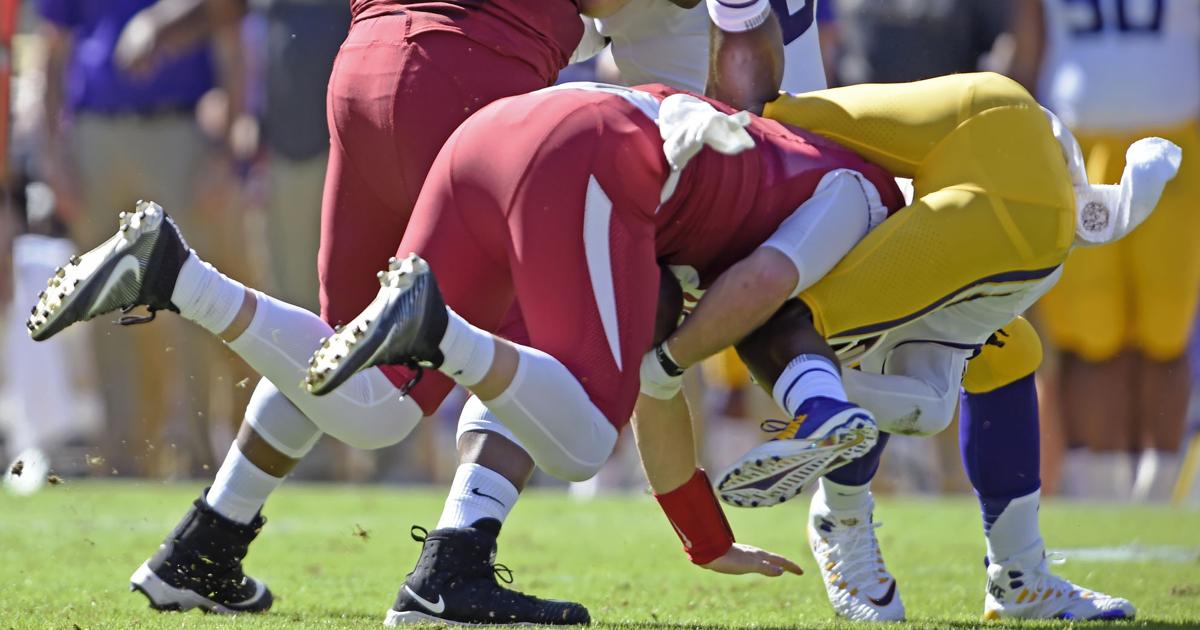 LSU defensive back Donte Jackson (1) and LSU safety Grant Delpit (9) loosen up on the field as they dance to music during a television timeout in the second half of the win over Arkansas.

“ 'Can you get me going? Nobody wants to throw at me,' ” linebacker Devin White said Jackson told Aranda.

So, Aranda designed a corner blitz for Jackson to be called on a third down during the game against Arkansas. The team practiced the stunt all week, knowing the Razorbacks’ attention on edge rusher Arden Key would create a free lane for the junior defensive back.

That thunderous sack in the Tigers’ 33-10 win on Saturday is only one example of Jackson’s changing and expanding role. His new position — he’s playing cornerback, still, but also safety and nickelback — comes amid LSU's growth spurt.

A defense that lost seven starters, including two first-round draft picks, off of last year's team continued to show maturity Saturday after the growing pains of September. After all, the Tigers are starting two new inside linebackers, a new safety, a new cornerback and a couple of defensive linemen who played little or not at all last season.

That’s not mentioning the three true freshmen who, at various points this season, have all started in the same game.

The growth is in the numbers. LSU hasn't allowed an opponent more than 355 yards of offense in the past five games after giving up more than that in each game of a sluggish three-game stretch against Mississippi State, Syracuse and Troy.

LSU players received help in preparing for Saturday’s morning kickoff from players — the ones no longer on the team.

Despite all of those new faces, LSU (7-3, 4-2 Southeastern Conference) heads to reeling Tennessee (4-6, 0-6) this week with one of the best defensive units in the nation.

The Tigers, back in the AP poll at No. 21, are 16th in total defense, ninth in sacks and 21st in scoring, and they’re led by a new standout in Jackson. Sure, White and defensive end Rashard Lawrence are anchors, but Jackson is emerging as the most vocal leader. His play on the field is matching his mouth.

“Donte is a playmaker, a Tyrann Mathieu type,” safety John Battle said. “You can move him all over the field.”

Jackson moved earlier this season from cornerback to nickelback, a position in which he covers the inside receiver or plays a quasi-linebacker role close to the line of scrimmage. Another move came a couple of weeks ago, when he started his first career game — high school or college — at safety.

He played in both spots, nickel and safety, for much of Saturday’s win.

“I’m a Swiss army knife,” Jackson said. “Coach Aranda came at me with it and moved me inside. That’s great. A lot of great corners move inside, but not a lot of guys move to safety. Just taking that on and making sure I learn everything. I’m one of the guys that sits in the meeting room, and I know what the defensive line is doing, I know what the linebackers are doing and I know what every guy in the secondary is doing. That’s just showing versatility.”

It no doubt helps his professional stock. Coach Ed Orgeron expects Jackson to leave early for the NFL draft after this season, the coach revealed last month. Jackson said he has not yet made a decision and won’t until after LSU’s bowl game.

The move helps the defense, too. Jackson finished with seven tackles, two for a loss, that sack and three pass breakups against the Hogs — a banner day for the 5-11, 175-pounder.

While Congress sets its focus on overhauling the nation's tax code, one provision of plans introduced in both the U.S. House and Senate could …

Jackson's move means less playing time for others, such as Battle. He spent several defensive drives on the sideline while Jackson and freshman Grant Delpit were in at safety in LSU’s base defense. Battle entered when the Tigers switched to the five-defensive back nickel set, with Jackson dropping down into that position.

Battle doesn’t mind. He knows just how important Jackson’s play is for the unit.

“(It) just gives him more room to make plays,” Battle said. “Coach Aranda trusts him. He’s our playmaker back there in the secondary. Got to let him go, let him off the leash.”

Jackson and Battle spoke to reporters after the Arkansas game, nearly side by side, just a few feet separating the veteran defensive backs. Jackson learned about Battle’s comments during interviews.

Sheldon Mickles and Mike Gegenheimer contributed to this report.

Despite the loss of two first-round NFL draft picks and as many as seven starters from last year, LSU’s defense is in the top 20 nationally.

The Tigers have not allowed a team to gain more than 355 yards in the past five games, a turnaround from a struggling three-game stretch against MississippiState (465 yards), Syracuse (384) and Troy (363).

There was a time Saturday when it looked more like some sort of Veterans Day parade in Tiger Stadium than a football game.