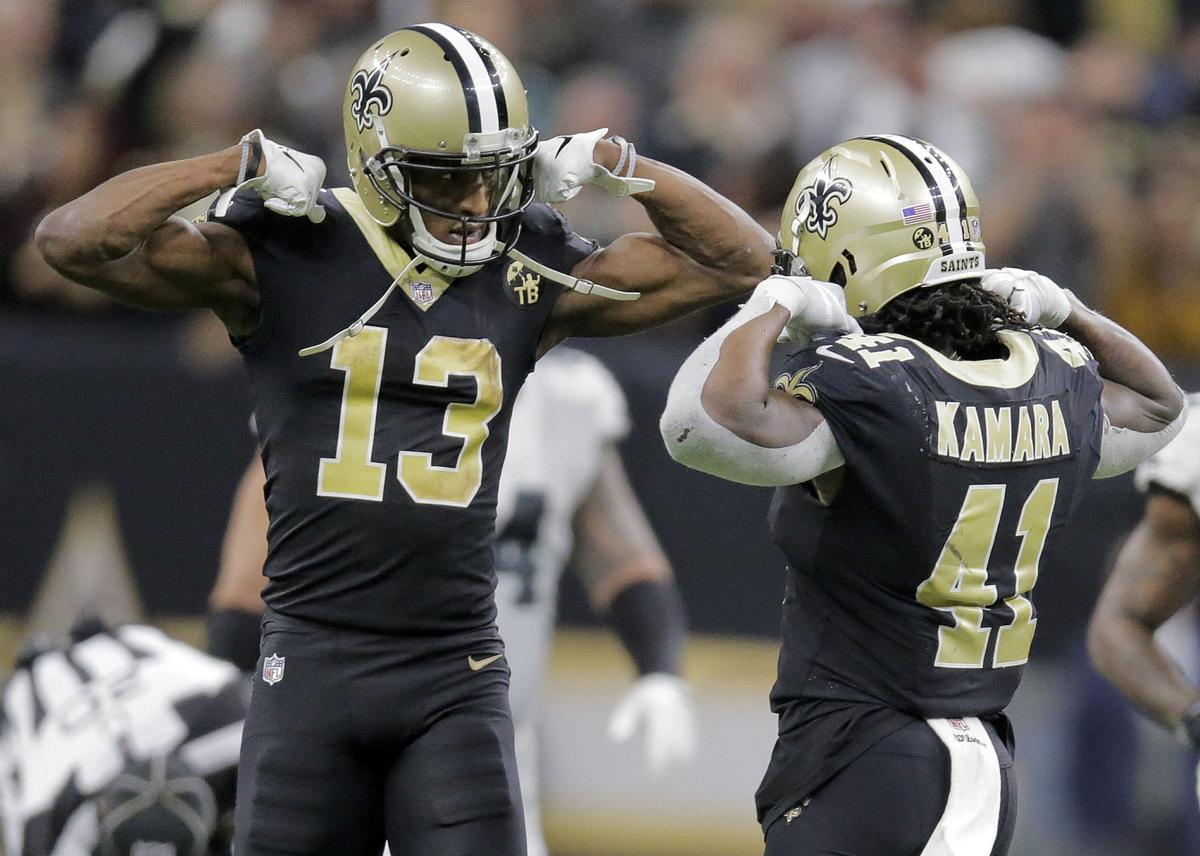 New Orleans Saints wide receiver Michael Thomas (13) congratulates New Orleans Saints running back Alvin Kamara (41) after running for a first down against the Philadelphia Eagles during the game at the Mercedes-Benz Superdome, Sunday, Jan. 13, 2019. 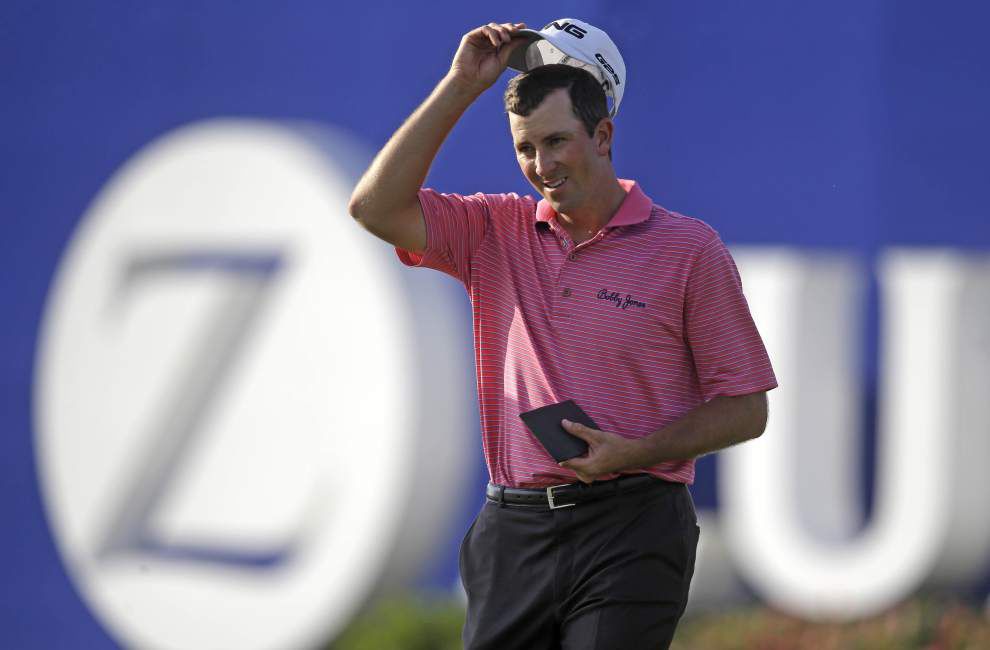 Michael Thompson reacts after missing a shot on the ninth green during the opening round of the Zurich Classic of New Orleans, Thursday, April 24, 2014 at TPC Louisiana in Avondale.

New Orleans Saints wide receiver Michael Thomas (13) congratulates New Orleans Saints running back Alvin Kamara (41) after running for a first down against the Philadelphia Eagles during the game at the Mercedes-Benz Superdome, Sunday, Jan. 13, 2019.

Michael Thompson reacts after missing a shot on the ninth green during the opening round of the Zurich Classic of New Orleans, Thursday, April 24, 2014 at TPC Louisiana in Avondale.

… Not playing is where the Miami Marlins and three other teams caught in their collateral damage found themselves Monday after 12 Marlins players and two coaches tested positive for coronavirus.

Were players flaunting the protective measures set up by baseball when they weren’t at the ballpark? Were those protective measures enough? It hardly seems so when Marlins manager Don Mattingly revealed that the team knew four players tested positive before Miami played Sunday’s road series finale with the Philadelphia Phillies. Now the Phillies, New York Yankees (next to play in Philly) and Baltimore Orioles (who were to open the series Monday at Miami) have had their seasons paused as well.

Professional baseball players and their owners have time and again come off as the most self-centered and selfish of all professional athletes. We had proof of that before they cobbled together this restart with all their financial haggling, and now we probably have more proof with what can be referred to as nothing less than an outbreak. Whatever was the cause of this, the statement of Marlins CEO Derek Jeter that “the health of our players and staff has been and will continue to be our primary focus” rings awfully hollow.

Other leagues have fared better. Soccer leagues in the U.S. and Europe managed to play again without major issues. The NBA and NHL have put their teams inside protective bubbles, and though their regular seasons haven’t restarted the early results look good, Clippers guard Lou Williams’ strip club misadventure (earning him a 10-day quarantine) aside.

But MLB was always going to be different with the insistence of playing relatively normal series home and away. Now it may have all gone off the rails.

If there is any silver lining, a thin one, it is this should serve as a cautionary tale for the NFL and college football. If this happened because Marlins players were behaving off the field like over-privileged pro athletes and weren’t being careful, I don’t have a lot of hope for football unless you can keep everyone in a bubble or under surveillance. They’re going to have to find a way to keep players and coaches from mixing with the public as much as possible.

More than soccer or the NBA, Major League Baseball looked like a trial balloon for pro and college football.

Getting Stevens back for his senior year was like landing a big recruit for coach Ed Orgeron (who turned 59 Monday). Stevens said he’s embraced the responsibility of wearing a mask while around his teammates.

“The thing that’s changed most is remembering to put on the mask in walkthroughs and team stuff,” Stevens said. “That’s the hardest part. Staying at home, not being in public, that’s easy for me. That’s a responsibility I understand.”

LSU play-by-play announcer Chris Blair asked Joseph about 2019 Biletnikoff Award winner Ja’Marr Chase, as the All-American returns as a junior. Joseph said Chase is “always looking to get better” and described some ways he needs to improve.

“When you watch his routes last year, he’d give away this glance or you’d know when he was going to run a ‘go’ route,” Joseph said. “But he’s always going to give the effort.

“Knowing Ja’Marr, he probably forgot he won the Biletnikoff. He wants to be the best receiver in the country, and that drives our group. He’s a great leader for this room.”

The wide receiver room includes nine players, including junior Terrace Marshall and senior Racey McMath. Joseph said he expects the Tigers will suit up six receivers each game, while “the other three need to be ready to go every week.”

“The system we ran last year is the LSU system,” Joseph said. “You have to take your hat off to Coach O for bringing Joe Brady here and Steve Ensminger for the way he ran it. But we’re keeping it. We just need to plug in the pieces.”

Even after 2019, hearing that a wide-open, pass-intensive attack is “the LSU system” still takes getting used to.

The “LSU Sixty” preseason camp shows air each Monday and Thursday through Aug. 20.

… The careers of players like Tiger Woods and Phil Mickelson and Rory McIlroy, filled with private planes and major championships, have skewed the perspective of how meaningful one win can be for most players.

Thompson won the 3M Open on Sunday outside Minneapolis, his second PGA Tour victory and first since the 2013 Honda Classic 2,702 days prior. It wasn’t a major title and it frankly came against the weakest field since the tour resumed play in mid-June, most of the top players saving themselves for this week’s World Golf Championship event in Memphis, Tennessee, and next week’s PGA Championship in San Francisco.

But it’s still a transformative victory for Thompson, who now is in the field in Memphis, for the PGA and September’s U.S. Open, leaping from 151st to 39th in the FedExCup standings. He also gets an invitation to the 2021 Masters (this year’s field is as it would have been in April) and exempt status through the 2022-23 season.

For most pro golfers, who have to earn their spot on tour every year, that’s huge.

“It's job security for two more years,” Thompson said. “I've never been in a better position, I think, than right now.”

Thompson, 35, spent three seasons at Tulane before men’s golf was eliminated after Hurricane Katrina. He finished at Alabama, counting himself as a Crimson Tide fan but a New Orleans Saints fan as well.

Golf fans here should have one more player to root for if they weren’t for Thompson already.

Joe Burrow reportedly agrees on his contract with Cincinnati: See the details here

Joe Burrow has reportedly agreed to a four-year, $36.1 million contract with the Cincinnati Bengals, according to ESPN. The former LSU quarter…