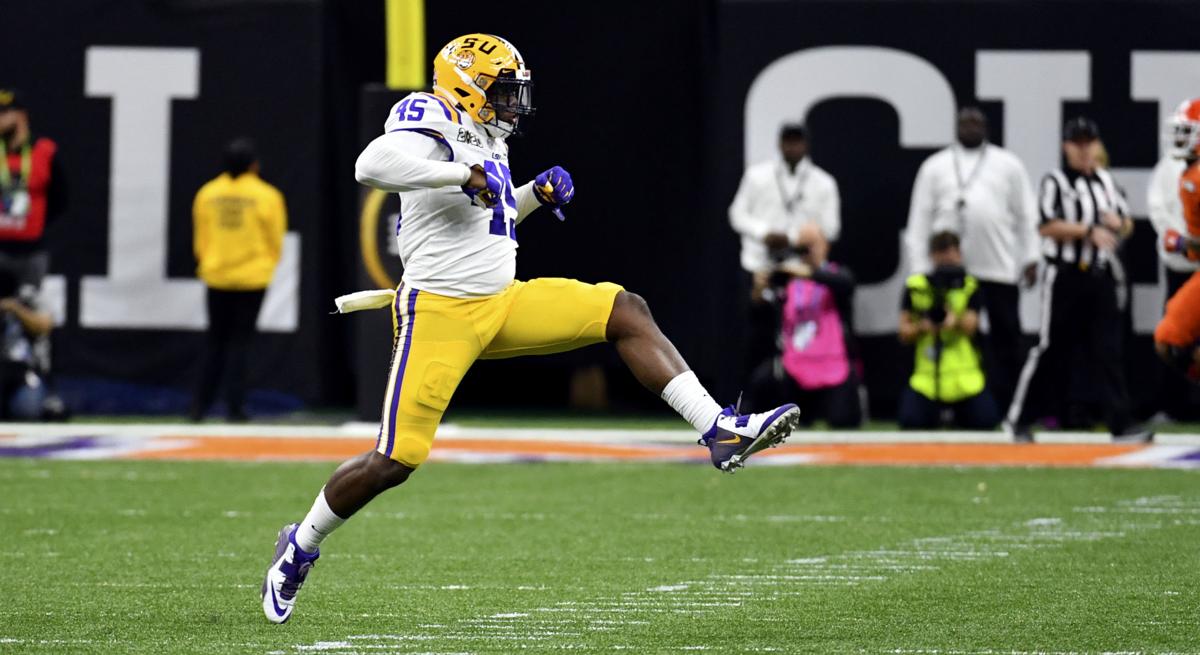 LSU linebacker Michael Divinity Jr. (45) celebrates a big stop in the first half between LSU and Clemson in the National Championship, Monday, January 13, 2020, at the Mercedes-Benz Superdome in New Orleans, La. 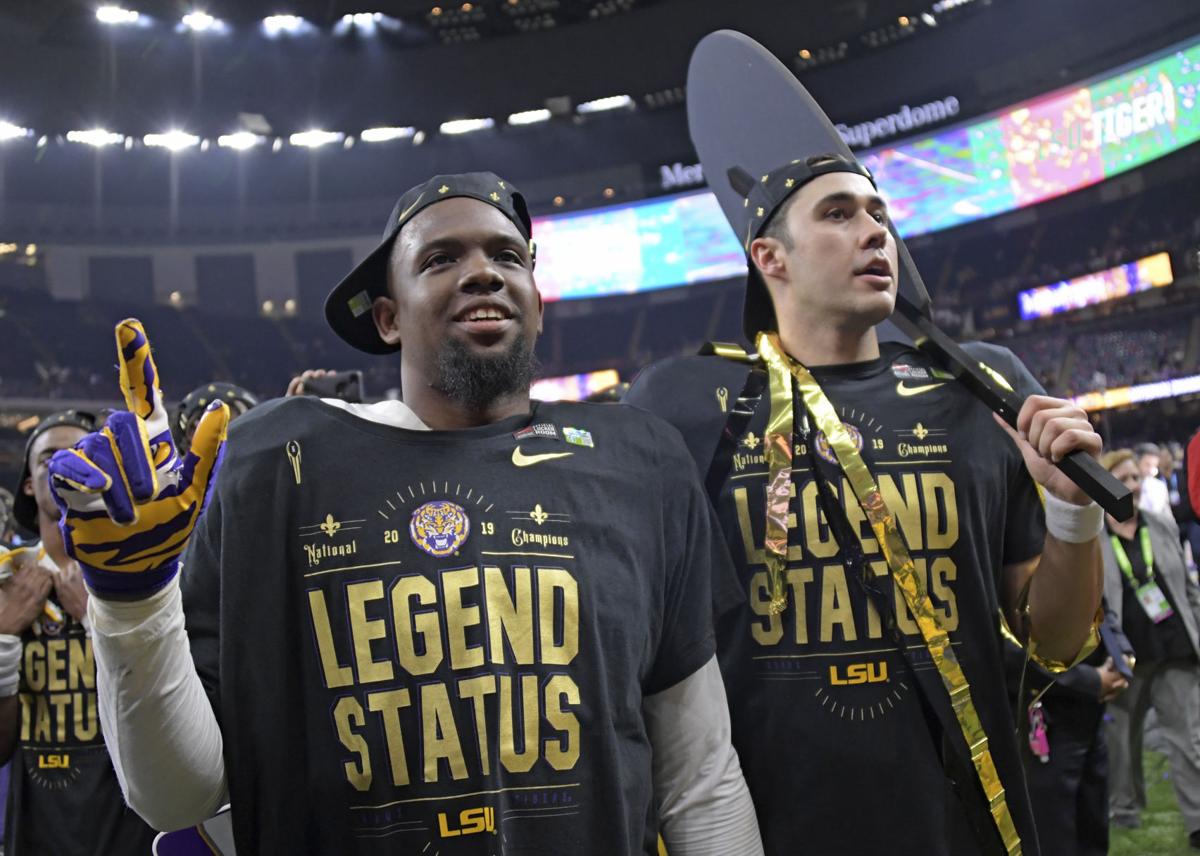 LSU linebacker Michael Divinity Jr. (45) celebrates a big stop in the first half between LSU and Clemson in the National Championship, Monday, January 13, 2020, at the Mercedes-Benz Superdome in New Orleans, La.

For LSU senior guard Adrian Magee, Monday night's CFP championship game at the Mercedes-Benz Superdome couldn’t have started much worse — being flagged for being ineligible downfield on the Tigers’ initial play from scrimmage — a spinning scramble resulting in a 38-yard completion to Thaddeus Moss, negating a play typical of the way the Tigers have started games this season.

“It probably was me,” Magee acknowledged. “I like to think that every mistake I make, I make up for it.

“But that was a pretty bad one.”

Ditto for the LSU as offense as a whole. Three series netting 15 yards, one first down and three punts, certainly atypical for a team used to dealing out first-round knockouts against even the most respectable foes (21-7 vs. Oklahoma in the Peach Bowl semifinal, for example).

“We knew starting out they were going to give us some different looks,” said offensive coordinator Steve Ensminger. “And they did that, so we had to make some adjustments on the sideline.

“We finally had a chance to draw it up and say this is what they’re doing to us, and it kinda worked out pretty good.”

Even though the Tigers found themselves behind by more than seven points for the first time this season, they never flinched. Instead it was a series of Burrow-led drives, resulting in five touchdowns on the next eight possessions, plus another early in the fourth quarter, to provide some breathing room while the defense did the rest in a victory that earned LSU its fourth national championship and third this century.

“We never doubted ourselves,” Magee said. “We were OK; we just had to catch on to what they were doing.

“This is why we’re that good.”

Make that great — and in the discussion for greatest of all time.

Of LSU’s 15 victories, 12 came by at least seven points, including margins of 27, 35 and 17 points in the SEC Championship Game and the two playoff victories.

To Ivan Maisel, who spearheaded ESPN’s project for the 150th anniversary of the birth of college football, that’s historically good.

“I think they’re in the same breath as '95 Nebraska and '01 Miami,” Maisel said. “They dominated every week and tonight, when they got hit in the mouth for the first time, they responded.

The Tigers were facing a Trevor Lawrence led-Clemson offense that averaged 45.3 points per game, only three points less than LSU. And were playoff-proven, having routed Alabama in last year’s championship game 44-16 and then holding off a title game-worthy Ohio State team 29-23.

“We knew Trevor was going to make plays,” said senior defensive lineman Rashard Lawrence. “Even when we got in front of them, if you look at some of the games he’s played, he brings his team back.

“That guy is going to be a top five pick next year. I put him on the same level with Joe Burrow.”

But after Clemson pulled to within 28-25 in the opening minutes of the third quarter, the Tigers buckled down, forcing four punts before recovering a fumble on Clemson’s five remaining possessions. After Clemson's final score, LSU allowed just 77 yards, 45 of them on the late series before the fumble.

“We came together as a defense and talked it out,” said senior linebacker Michael Divinity, who returned after missing six games for what the school termed personal reasons. “We started making him uncomfortable in the pocket.

“And you could see were affecting him a lot and making him throw a lot of bad balls (Lawrence was 6 of 15 in the second half).

“We talk about finishing. Tonight we finished.”

After rushing for 64 yards in the first half plus catching three passes for 34 more, Etienne had only five carries for 13 yards and two catches that netted just 2 yards in the final two periods.

Late in the third quarter, Patrick Queen dropped Etienne for a 1-yard loss on a screen pass and followed that by getting him on a blitz for a 2-yard loss.

Both put dampers on the start of series that could have made things uncomfortable for LSU even though the Tigers had 10-point lead at the time.

“Watch them on film — when they did certain stuff, you knew something was coming,” said Queen, LSU’s co-tackling leader with eight. “Etienne is tough to bring down, and you knew he wanted it tonight.

“But we were able to make some plays on him. Then, once the offense started scoring, we got the energy going and started getting them off the field."

It did take a while for Burrow to find his groove. Perhaps his overall completion percentage of 65.4% (31 of 49) wasn’t up his usual standards, but he had five touchdown passes plus a 3-yard run for another on a night when the Tigers' offensive plan was to have him keep more often. Not counting sacks, Burrow rushed for 84 yards.

“Joe’s a confident guy, and we’re a team that’s confident in our abilities,” said junior tight end Thaddeus Moss, who made an open, flat-footed catch for one touchdown and dove over the pylon for another. “We really didn’t look up at the scoreboard when we were behind.

“We made our adjustments, trusted our defense to get them off the field and played our brand of football after that.”

Monday’s victory also may have finally mitigated the leftover feelings from one of the worst nights in LSU history — the 21-0 loss to Alabama in the 2012 BCS title game, also played in the Superdome.

“The demons have been exorcized,” said T-Bob Hebert, a center on that team and now a broadcaster in Baton Rouge. “Gone is the pain of the past.

But now, the pressure will be to repeat. This season set an expectation level for LSU football that will be hard to dampen from at least a fan aspect even though the Tigers lose a generational quarterback in Burrow.

Redshirt sophomore Miles Brennan, Burrow’s apparent successor, acknowledged that pressure Monday, though he pointed out that it’s as much from within as without.

“Now that this is over, we’re going to enjoy it as much as we can,” he said, “Then when we get back to Baton Rouge, we’ll start working towards next season.

“You can’t worry about the end goal, even though we got it tonight. We showed tonight how tough it is to repeat. We’ll block out the noise and get after it.”