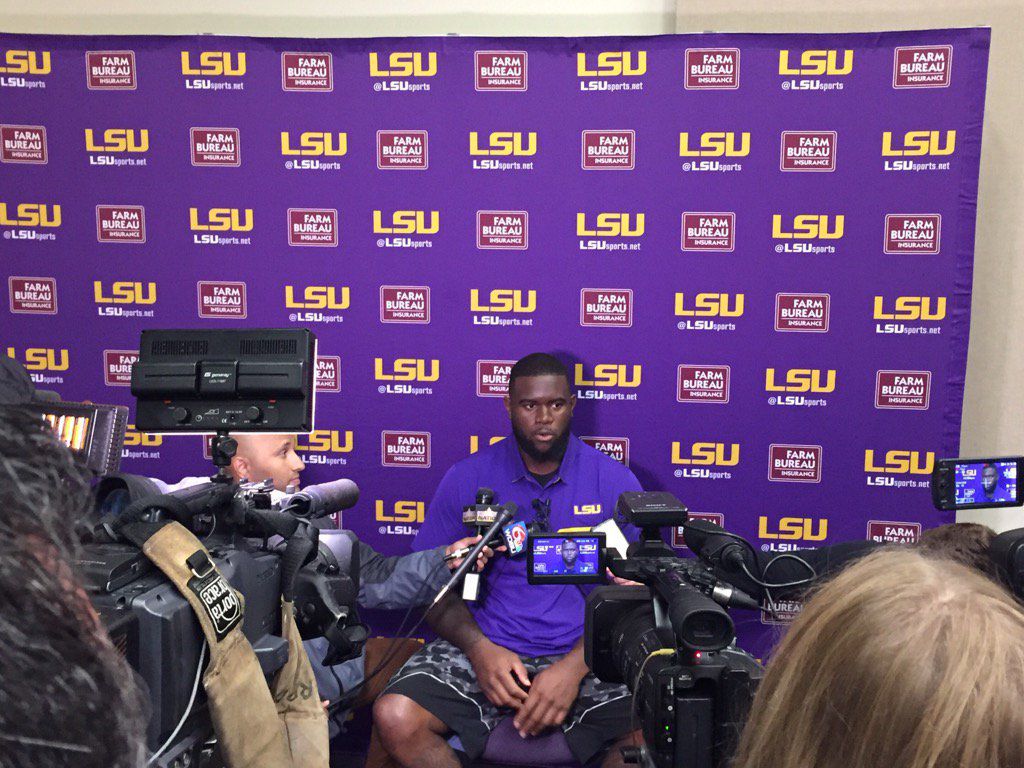 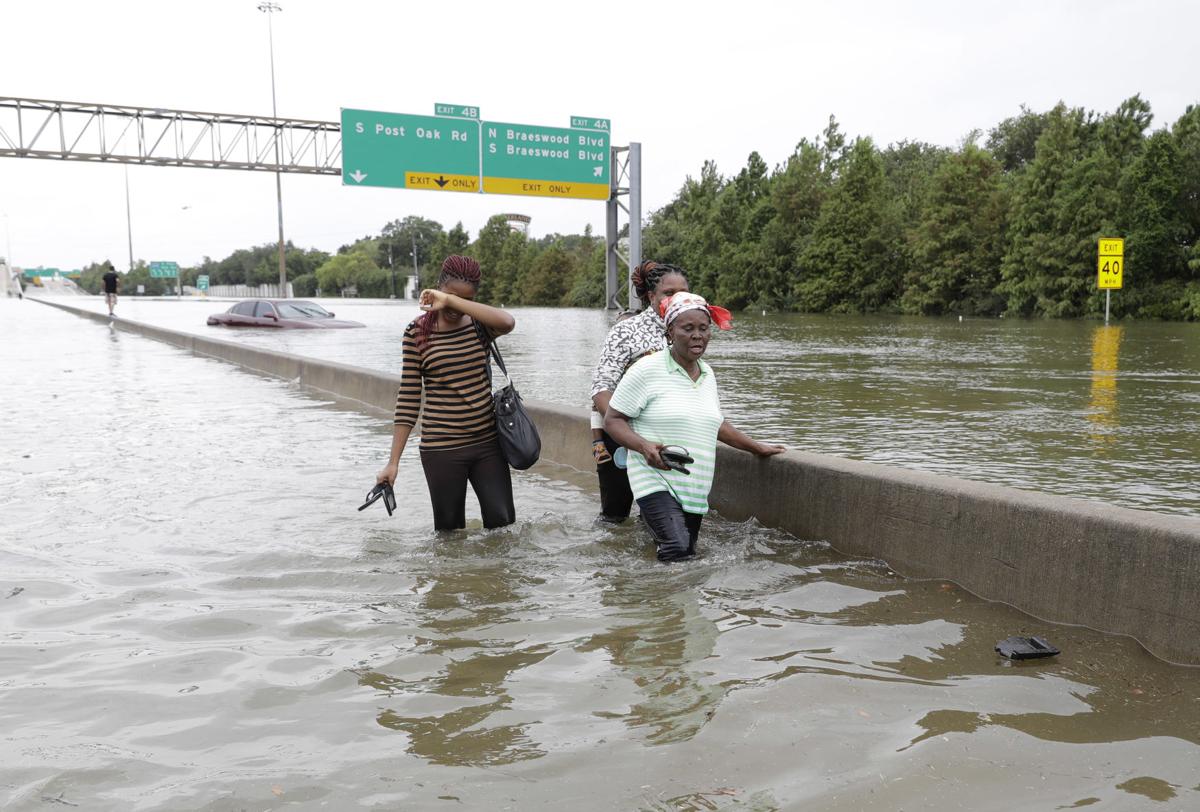 Toby Weathersby filled up his truck with gas and was bound for flooded Houston, set on rescuing his trapped grandparents.

“I was, like, fixing to be stupid," the LSU junior offensive tackle said Monday during a sometimes-emotional meeting with reporters. “I had to come to the realization that I had to leave that up to the professionals. I wanted to (go) so bad.

“I just sat down and just thought about the situation and what I was going to be putting myself in. At the time, I wasn’t worried about school or nothing. I was worried about getting there, getting my people and bring them back here until everything dies out.”

Weathersby’s grandparents are stuck in their home in the Briar Creek neighborhood of Houston, he said, and they refuse to get onto rescue boats. Flood waters from Hurricane Harvey have inundated the area, submerging his grandparents’ two vehicles and creeping toward the home as rain continues to pound the area.

Weathersby, one of seven Houston area natives on LSU’s team, spoke to his grandparents Sunday night, he said. His mother also still lives in Houston. She’s in a second-floor apartment and is safe.

“They’re set in their ways,” he said of his grandparents, Billy and Jackie Stokes. “They won’t want to lose their house. They’re just trying to ride it out. My mom was trying to get them to come over to the apartment and get to higher grounds but, right now, they don’t want to listen. It’s getting worse and worse. It hasn’t stopped raining.”

The full interview with Weathersby:

Your family was affected by the storm, right?

My mom is good. She stays on the second floor in some apartments. The water hasn’t gotten that far. My grandparents … right now, they’re struggling. They’re stuck right now, in the flood. Water is almost in the house. It’s up there. How the house is set up, it’s kind of up a hill. The water is pretty high. The trucks are underwater.

Right now, it’s a waiting process to see what we can do and how they want to do it. They were being so stubborn. They’ve been through many hurricanes, like Hurricane Allison, long time ago. That was one of the worst hurricanes we had in Houston. It kind of tore the house up.

They’re set in their ways. They won’t want to lose their house. They’re just trying to ride it out. My mom was trying to get them to come over to the apartment and get to higher grounds but, right now, they don’t want to listen.

It’s getting worse and worse. It hasn’t stopped raining. By it being a Category 4 hurricane, they said it’s a 400-year hurricane. My concern for them is trying to convince them to get out before it gets any worse. You try to stay positive, but you’ve got to look at the ideal situation. We all know that. It’s still raining right now. Certain parts of Houston are underwater, by NRG (Stadium). NRG is the safe spot, and it’s 17 feet of water.

It’s one of those situations right now, you’ve got to keep praying. Hopefully my prayers reach over to my grandparents, so they can hear me right now, trying to tell them, "Try to get out." It’s possible. I know people willing to go over there on the boat and go get them. Right now, they’re not listening. It’s kind of hard and frustrating.

Have you spoken to them?

I talked to them last night before I went to bed. They were like, "(We’re) going to be all right." I think they’re telling me that because I’m so far away and they know I’m here and they’re my other lifeline. They’re telling me one thing, but I already know. I know the situation, know the neighborhood and how bad it gets over there with the flood in the neighborhood. I know they don’t want to leave. It’s kind of hard. If I was there, I’d literally drag them out of there, pick them up and take them.

Right now, I can’t do anything. I can just wish and pray everything will be all right.

Their vehicles are flooded?

Yeah, my grandma’s truck and grandpa's car is underwater. Hopefully it will stop. Hopefully the water, it died down. They can’t get out. Right now, they’re just riding it out, trapped in there.

Where is this located?

Briar Creek. North of Houston. Been living there over 20 years.

That’s the fort. They want to hold it down. Sometimes, you’ve just got to let go and let God take the wheel. That’s something that can always be replaced. You can’t replace a life.

That’s what really pissed me off. I’m like, "Damn, at least listen to me and try to get out of there?"

They won’t get on a boat?

My grandma, other reason she doesn’t want to leave is because she’s getting old. Her limbs and knees have been hurting her so bad. She’s like, "We’re going to ride it out as much as possible until it’s really time to retreat."

It’s one of those things. I keep praying about it, and hopefully everything will be all right.

How close is the water to getting in?

They haven’t been telling me. I’ve been playing it by ear. Hopefully whatever they tell me is the truth and not just trying to feel better.

Does it make it hard to concentrate on football and school?

It is right now. But I got a great support system here that’s been around and been checking on me and stuff like that. Everybody around here knows, I don’t really show no emotion. I’m a pretty tough guy, so whatever I got going on inside me, I’m going to hide that and put on another face for everybody. Around here, I may not think of it, but I know people look at me as a leader. I try to keep a positive face and keep a smile on and still be myself, even though it’s bugging me inside.

Can football be a welcome distraction when you’ve got so much more serious things on your mind?

You had to be excited to go home and start the season at NRG Stadium. What’s your emotional state now?

How much have you Houston guys on LSU’s team talked?

I’ve been checking with some of the Houston guys, making sure their families are OK. If their family is OK, it gives me a sense of hope. Just checking on each other.

Is it hard for you to resist traveling there to help?

Honestly, last night, I filled my truck up. I was, like, fixing to be stupid. I had to come to the realization that I had to leave that up to the professionals. I wanted to (go) so bad.

I just sat down and just thought about the situation and what I was going to be putting myself in. At the time, I wasn’t worried about school or nothing. I was worried about getting there, getting my people and bring them back here until everything dies out.

We have a special sign in Houston going to downtown that says "Be someone." Normally, signs tell you how high it is, like, 17 feet. It was all the way up there. I know I drive by that sign all the time and see that. I can’t imagine you being in your vehicle and looking up and that much water.

LSU players were kept in the dark, much like everyone else.

'We stand with you': LSU football players offer encouragement to Harvey flood victims