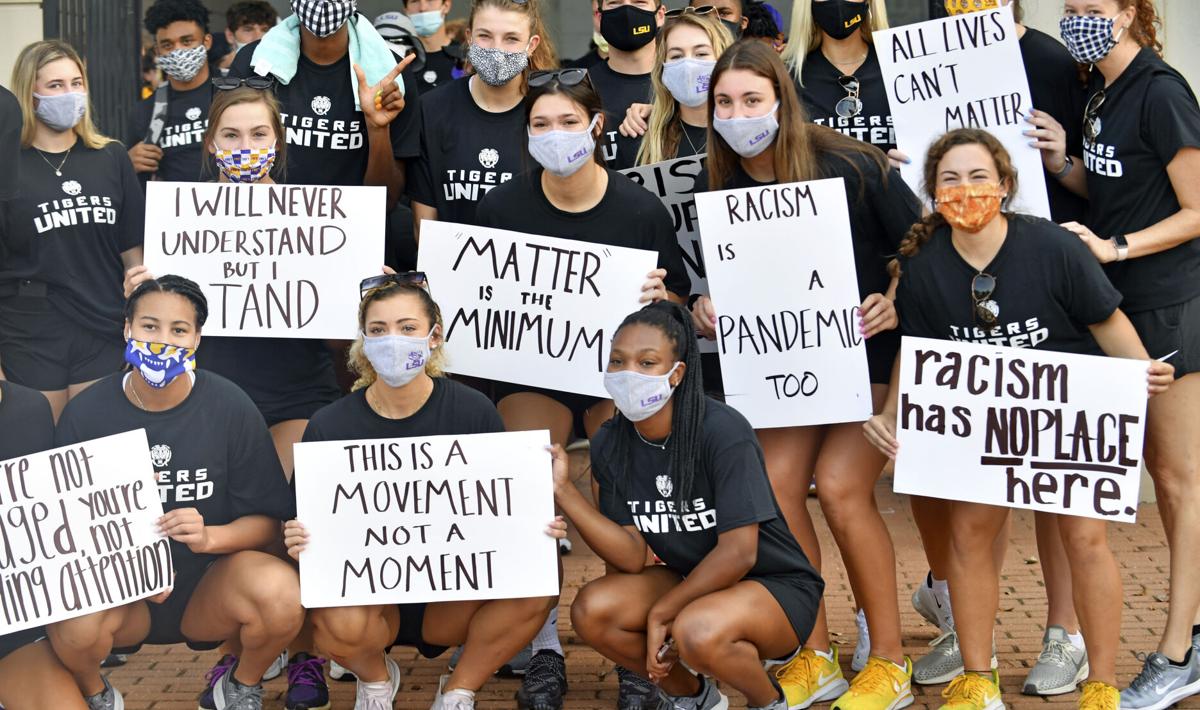 LSU student athletes pose for a photo before marching in solidarity against racial injustice Saturday morning, September 12, 2020, around Tiger Stadium on campus in Baton Rouge, La. 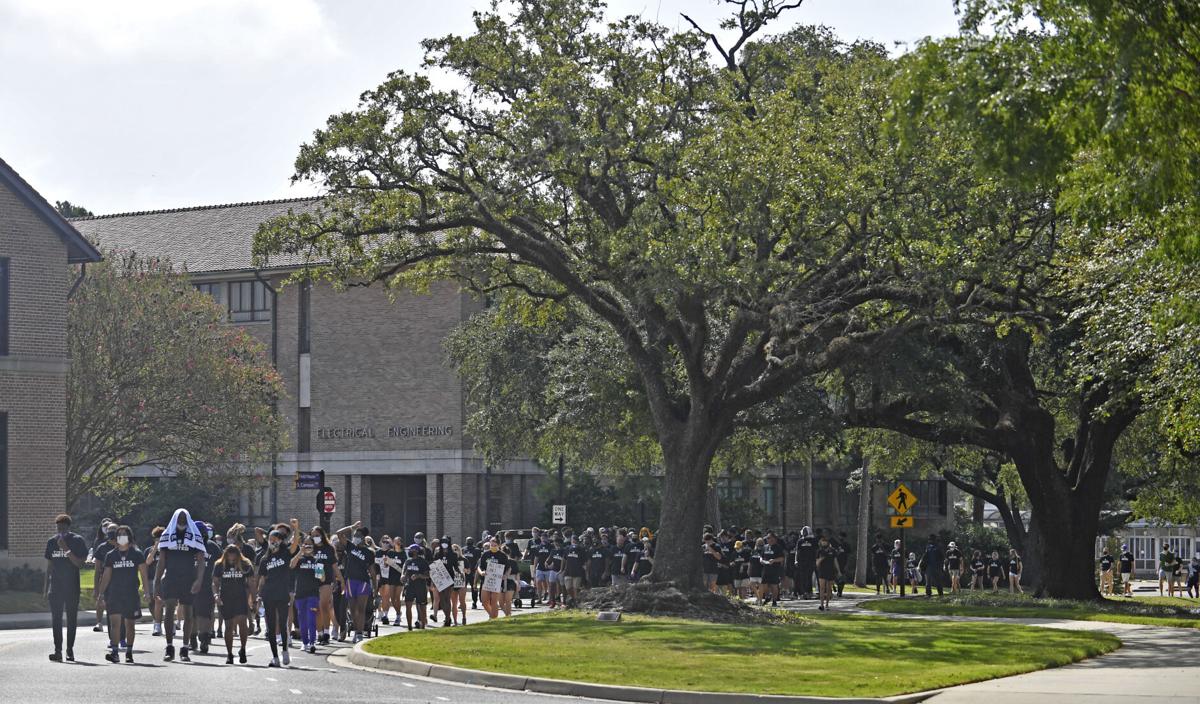 LSU student athletes march in solidarity against racial injustice Saturday morning, September 12, 2020, around Tiger Stadium on campus in Baton Rouge, La. They were joined by coaches and other staff members in the march. 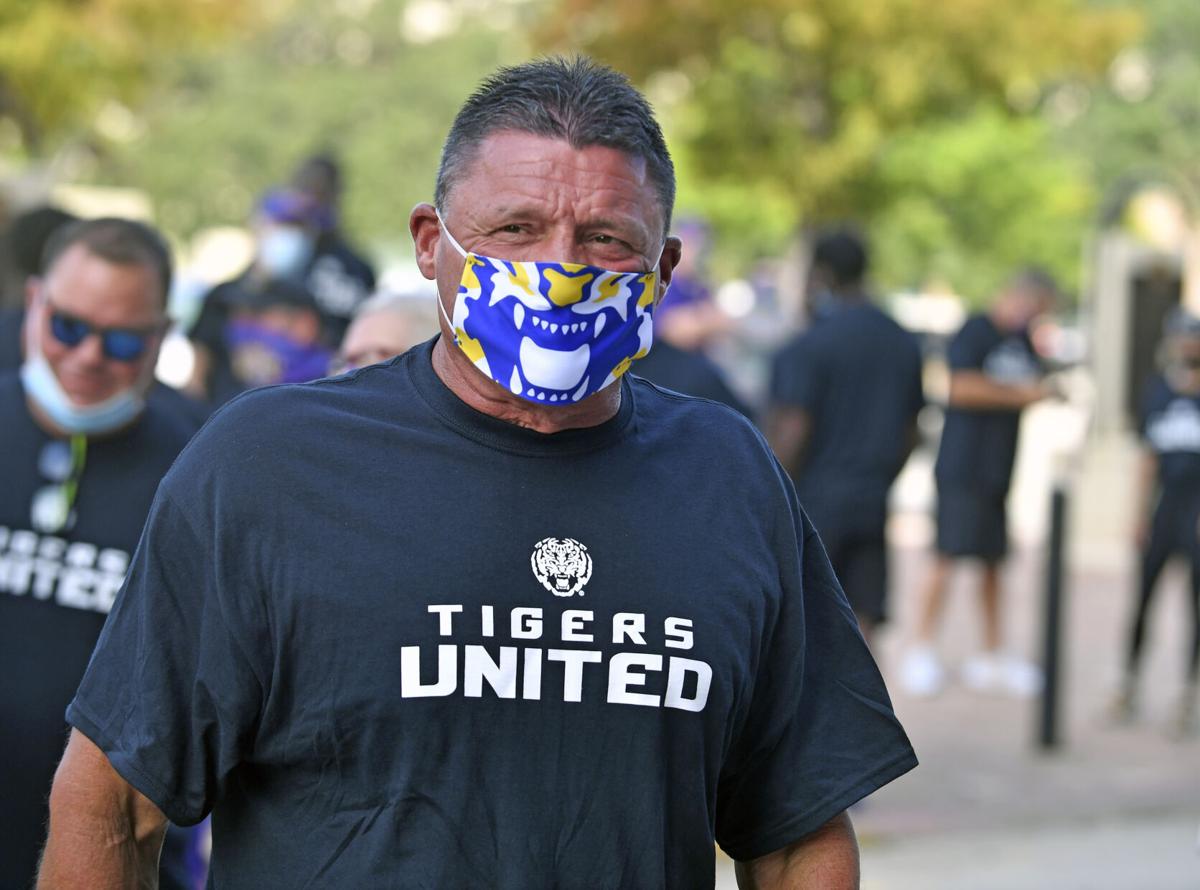 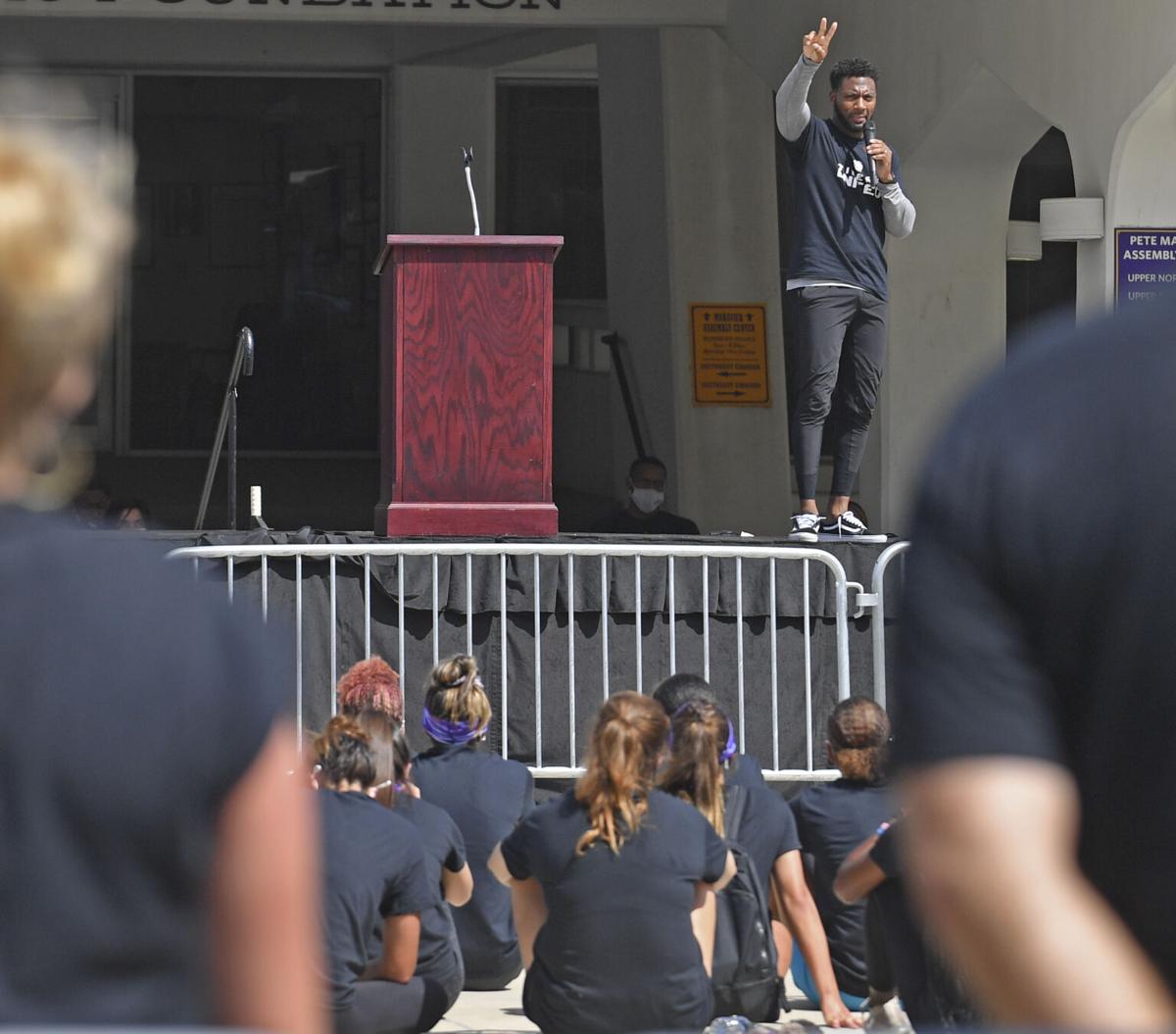 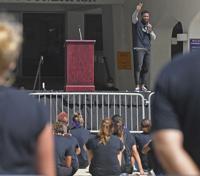 LSU student athletes pose for a photo before marching in solidarity against racial injustice Saturday morning, September 12, 2020, around Tiger Stadium on campus in Baton Rouge, La.

LSU student athletes march in solidarity against racial injustice Saturday morning, September 12, 2020, around Tiger Stadium on campus in Baton Rouge, La. They were joined by coaches and other staff members in the march.

In the largest social demonstration by LSU’s athletic department this year, players and coaches from almost every sport marched Saturday morning around Tiger Stadium to protest racial injustice.

The unity walk, organized by the Black Student-Athlete Association, brought together a couple hundred athletes and dozens of coaches as LSU athletics showed its support for social justice. Everyone present wore black “Tigers United” T-shirts provided by the school.

The march began at 10:23 a.m. on the western side of Tiger Stadium, the same area where the football team began its march through campus to the university president’s office two weeks ago.

The athletes and coaches walked through a central gate team by team, forming a column that wrapped around the southern side of the stadium. The group marched up Field House Dr. toward a roundabout and down Victory Hill, passing the same areas usually crowded by football fans on game days this time of year. Some of the athletes made signs.

“Racism is a pandemic too,” one said.

“This is a movement not a moment,” read another.

The protest Saturday marked the largest demonstration by LSU’s athletic department since a White police officer killed George Floyd, a Black man, during an arrest in May, a death that sparked protests and unrest nationwide.

LSU coaches had issued statements earlier this summer denouncing racism and pledged to listen to their athletes, and some members of the athletic department attended a rally for unity between Southern and LSU in mid-June. The school briefly put “Black Lives Matter” graphics on screens in multiple stadiums. Meanwhile, women's basketball player Domonique Davis created the BSAA.

Months passed. Then two weeks ago, LSU football players skipped practice one day to spark conversations with LSU leadership about social injustice and racism. The football team — the most visible one on campus — has since held team meetings about racism and inequality. Since then, coach Ed Orgeron said he has tried to promote more open dialogue with players about issues they face off the field.

Until Saturday, though, the athletic department hadn’t displayed a unified front. Orgeron walked with the athletes, as did athletic director Scott Woodward and interim university president Tom Galligan. The BSAA invited every athlete and staff member not in isolation or quarantine.

For the next 45 minutes, speakers representing the BSAA, university leadership, athletes, coaches, faculty and alumni spoke from a raised platform. Staff members sanitized the podium between every speech.

Galligan expressed his support of the athletes and the Black Lives Matter movement, and women’s basketball coach Nikki Fargas delivered a statement on behalf of the coaches. Fargas told the athletes the coaches will fight with them for equality and justice.

“Hold us to this,” Fargas said. “Keep us accountable. We know the beats of your hearts literally depend on it.”

The BSAA asked former LSU football player Ryan Clark to deliver the keynote address. Clark spoke to the football team’s leadership council after their march to the president’s office, and he has addressed racism, police brutality and inequality in his role as a commentator on ESPN.

Clark spoke about education, fairness, accountability and the importance of loving yourself and the people around you. He wanted the athletes and coaches to monitor racism in their own lives, and he encouraged the athletes, who he said have the most influential voices for 18-to-22-year-olds in Louisiana, to speak with coaches and public officials. He said their generation can fix the racism plaguing America.

Now that LSU’s athletic department has demonstrated its support, the athletes want to find concrete actions that create social justice and equality. Some of them want all incoming students to take a Black history course, and they asked for more staff members devoted to mental health and athlete development.

Senior safety JaCoby Stevens, who has emerged as one of the most vocal leaders on the football team, encouraged the athletes to help areas around Baton Rouge so “everyone has similar opportunities.”

“Something needs to happen and something needs to change,” senior softball player Akiya Thymes said. “I think it can start with the smallest things, like the way we talk to people and the way you look at people. Love is love, and you should love people like you want to be treated.”

Rabalais: Why the crazy early results should be a cautionary tale for LSU football

Notes on a golf scorecard while hoping that if my power gets knocked out by Hurricane Sally it gets restored before the U.S. Open begins Thursday …