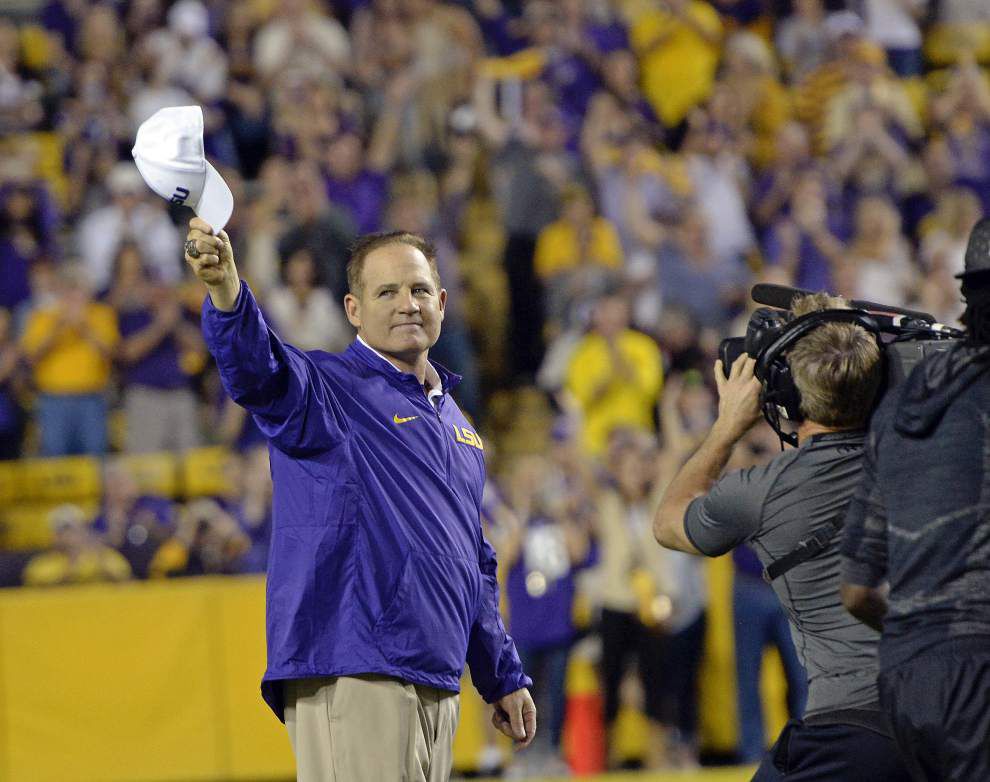 Advocate staff photo by BILL FEIG -- LSU head coach Les Miles doffs his hat to the crowd during senior day festivities before the first half Saturday, Nov. 28, 2015, in Tiger Stadium. 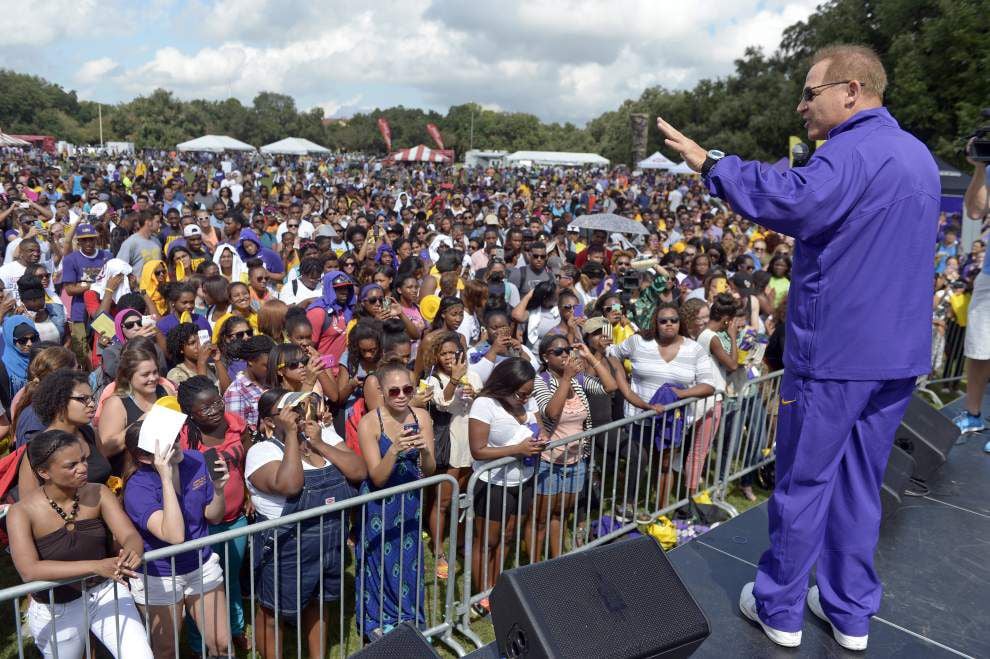 Advocate staff photo by RICHARD ALAN HANNON -- LSU head football coach Les Miles greets a packed crowd at the LSU Fall Fest celebration on Friday at the Parade Ground in Baton Rouge. The university tradition began in 1994 as the Chancellor’s official 'Welcome' for new students, faculty, and staff and a “Welcome Back' for returning members of the school. 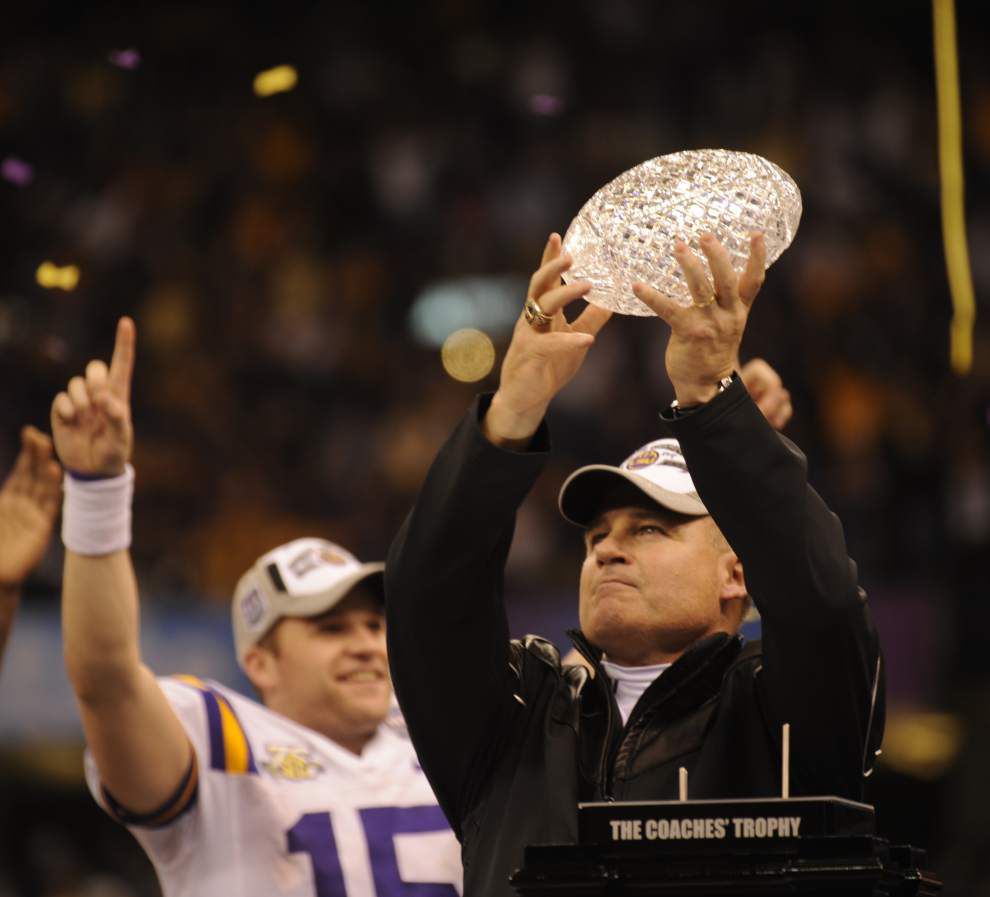 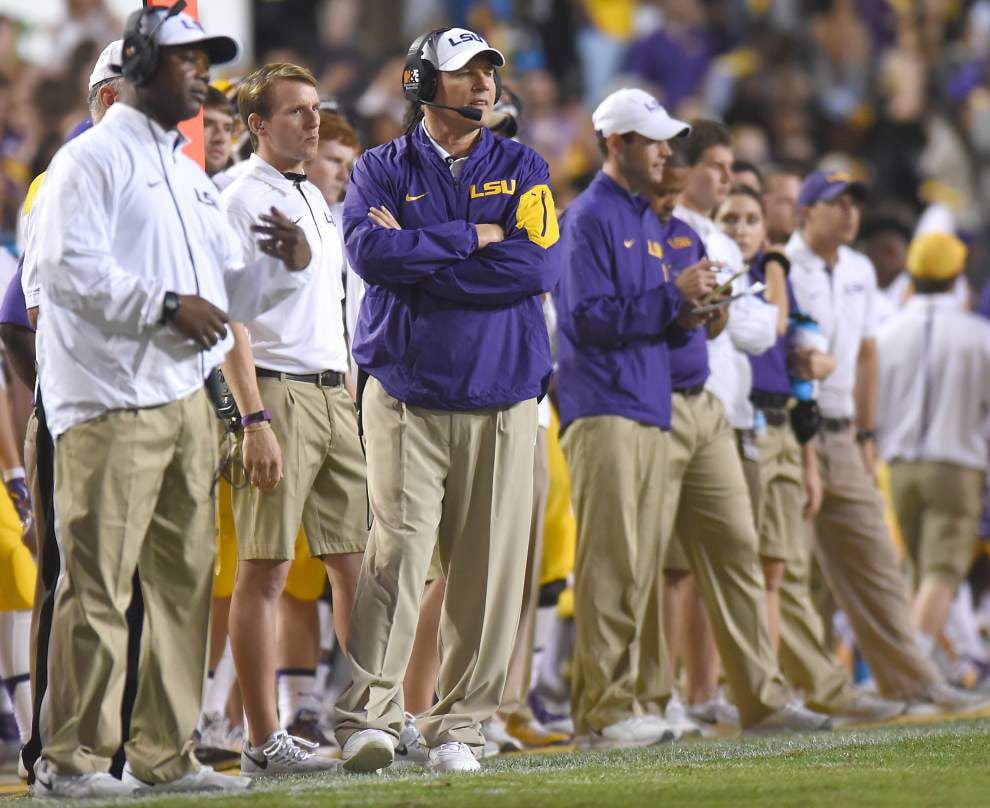 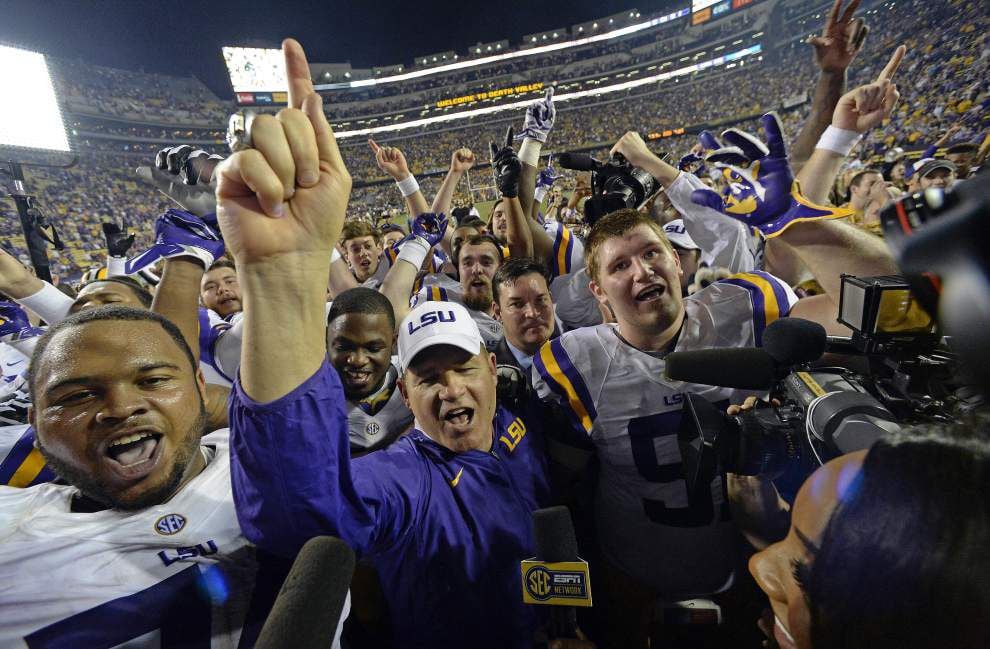 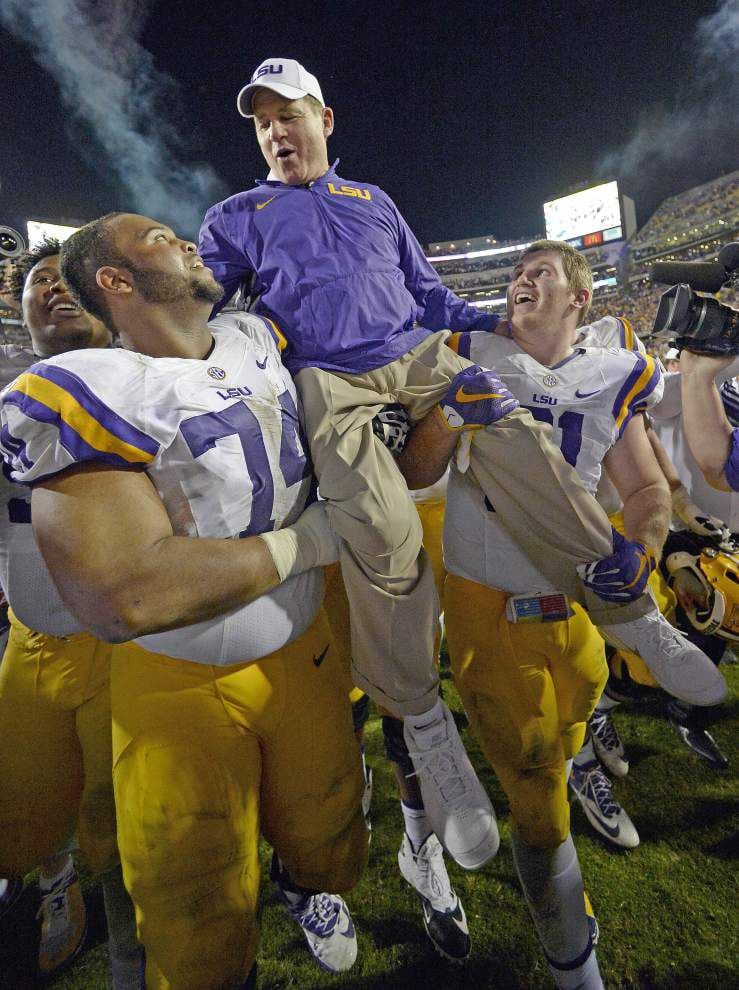 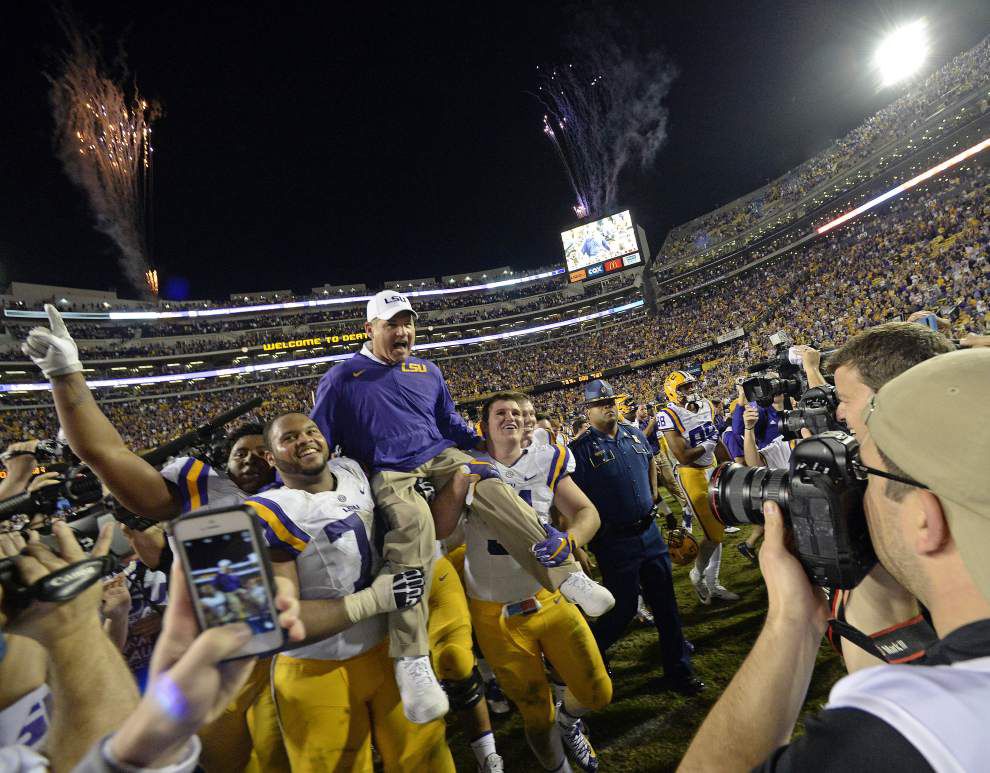 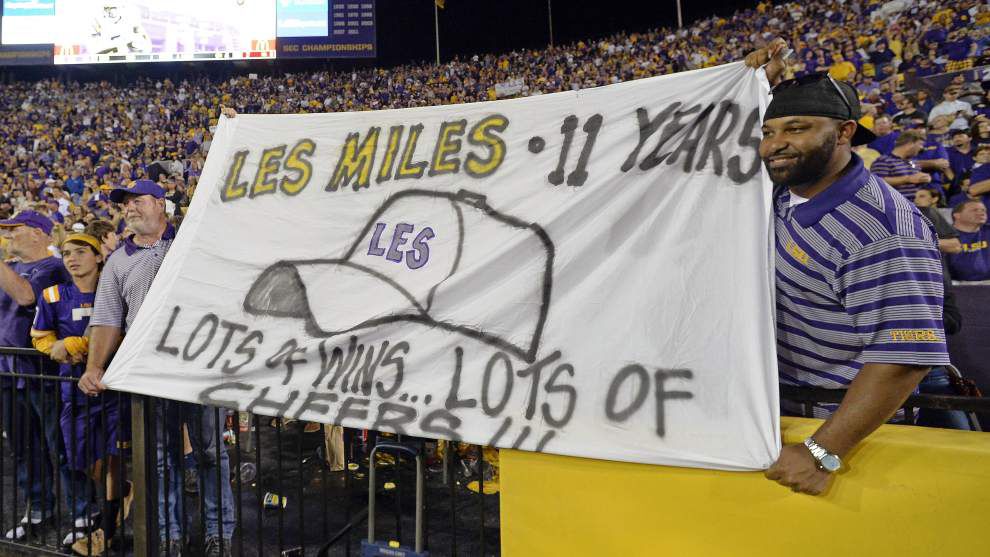 Advocate staff photo by BILL FEIG -- LSU fans show off a large sign late in the second half of Saturday's game against Texas A&M in Tiger Stadium. LSU won 19-7.

Advocate staff photo by BILL FEIG -- LSU head coach Les Miles doffs his hat to the crowd during senior day festivities before the first half Saturday, Nov. 28, 2015, in Tiger Stadium.

Advocate staff photo by RICHARD ALAN HANNON -- LSU head football coach Les Miles greets a packed crowd at the LSU Fall Fest celebration on Friday at the Parade Ground in Baton Rouge. The university tradition began in 1994 as the Chancellor’s official 'Welcome' for new students, faculty, and staff and a “Welcome Back' for returning members of the school.

Advocate staff photo by BILL FEIG -- LSU fans show off a large sign late in the second half of Saturday's game against Texas A&M in Tiger Stadium. LSU won 19-7.

The potential deal to fire Les Miles as LSU’s football coach began to fall through early last week as the school’s president started to intervene even as negotiations between LSU and Florida State coach Jimbo Fisher were ongoing, multiple sources have told The Advocate.

The university began leaning toward keeping Miles as early as the Wednesday before LSU’s win over Texas A&M last Saturday, and a final decision was announced to some LSU Board of Supervisors members during a meeting at halftime of the game.

Intermediaries from LSU and intermediaries for Fisher were in discussions as late as last week about the former Tigers assistant coach replacing Miles, but those talks curtailed late in the week.

Ultimately, the overwhelming monetary figure to secure both deals concerned the school’s president and others at a time when the state and school are experiencing budget struggles.

Also, the LSU Board of Supervisors was split on the decision to part ways with Miles, and the outpouring of support for the quirky 62-year-old coach — who has the second-winningest record in program history — factored in as well.

There also was political pressure in the highest form.

Gov. Bobby Jindal, a friend to Miles, made calls to high-ranking officials before Saturday’s game. He expressed his concern at how the situation had been handled and encouraged officials not to part ways with the coach, a source said.

“LSU made the right decision in retaining Coach Miles,” Jindal said in a statement to The Advocate earlier this week. “As the (second) winningest coach in LSU history, he earned it.”

Multiple sources spoke to The Advocate this week for this story, all of them wishing to remain anonymous as they were not authorized to speak about the matter.

School officials have declined to speak with The Advocate.

Athletic Director Joe Alleva, in a text, said he had “nothing to say. I have moved on.” The Advocate requested an interview with LSU President F. King Alexander on Wednesday but was told that he is unavailable until Monday. A public records request, submitted Sunday to the school, has not been filled.

Alexander spoke this week to the Baton Rouge Business Report, which is owned by LSU board member Rolfe McCollister.

Alexander confirmed that a final decision on Miles’ future was made a few days before the regular-season finale against Texas A&M and that it was a joint decision among him, Alleva and board members. The exorbitant amount to buy out Miles’ contract and his staff — roughly $17 million — would have given the school a “black eye” heading into the next legislative session, Alexander said.

“After the type of budget battle we went through this past spring, we certainly do not need to be throwing tens of millions of dollars around under certain circumstances,” he told the Business Report.

Fisher spent seven seasons as LSU’s quarterbacks coach and offensive coordinator from 2000-06, helping the Tigers to the 2003 national championship, a 70-22 record and three Southeastern Conference titles. He has won a national title and three conference championships in six seasons at Florida State.

Representatives for Fisher and those from LSU were in negotiations for him to replace Miles, four sources knowledgeable of the talks told The Advocate.

Fisher has declined comment multiple times when asked about the LSU job, most recently Thursday afternoon during an interview on ESPN Radio.

The final price tag to part ways with Miles and hire Fisher was more than $30 million. The figure “shocked” Alexander and other officials. Some fought for the coach because of their relationship with him.

Jindal, for example, is close with Miles. The coach helped in his re-election bid in 2011, and Miles was a featured guest this summer at a reception launching Jindal’s presidential campaign. After speaking with officials Saturday morning about Miles, Jindal posted a message on his Twitter account in support of the coach.

Gov.-elect John Bel Edwards, meanwhile, said this week he had nothing to do with decision.

“There were rumors that I had said absolutely that we would not come up with $15 million (to buy out Miles’ contract), and some rumors said I was trying to drive him away,” Edwards told The Advocate. “The truth is, none of that is true. I had absolutely nothing to do with it.”

Private funds from several major donors — not university funds — would have covered much, if not all, of the expense, but Alexander told the Business Report many in the Legislature and in the general public fail to understand that distinction. Also, if Miles were to find another job, the buyout money would have been offset, according to a copy of the contract.

“The public at large really doesn’t differentiate where the money comes from,” Alexander told the outlet. “No matter how you explain it, it’s still a $15 million to $25 million decision that needs to be factored into the overall equation.”

The LSU Board of Supervisors never received a recommendation to end Miles’ contract — something that would have been made by Alleva and approved by Alexander. The board was split on the issue, said multiple board members.

Alexander informed members at halftime of the decision to keep Miles.

Alexander’s message to board members, another recalled: “Win or lose, this man is our coach, and we’ve got to stand with him.”

The cost of making a change “was a big part of” the final decision, and the entire ordeal involved “a lot of confusion and miscommunication and speculation,” one board member said.

Many members were kept in the dark last week, acquiring much of their information on the situation from media reports, one board member said, adding that members expected Alleva and Alexander to conduct an evaluation of Miles after the season.

The media reports regarding Miles’ fate were “unfair to the process” and did not “allow for a methodical decision” on the coach’s future, a board member said.

The Advocate first reported Nov. 17 that Miles was coaching for his job over the final two games, with those games subsequently resulting in a 38-17 loss at Ole Miss and that 19-7 win over Texas A&M. ESPN and other national outlets reported Miles likely would be fired after the season and that Fisher was the school’s No. 1 target.

It made for an electric and emotional Saturday night in Tiger Stadium last week. The Tigers beat the Aggies to give Miles his 111th victory in 11 seasons as LSU’s coach.

LSU players carried Miles off of the field, dropping him in front of a rocking student section at Tiger Stadium that boomed with chants of his name.

It was a surreal scene. It got more bizarre about 30 minutes later, when Miles was told by Alexander and Alleva that he’d remain LSU’s coach. Kathy Miles, the coach’s wife, was pulled into Miles’ private locker room in Tiger Stadium and told the news: Her husband still had a job at LSU.

Alleva delivered that same message to a room full of reporters moments later.

A day before that — on Friday — the athletic director met with Miles regarding the situation. Whatever was said in that meeting had Miles and the coaching staff confident they would keep their jobs, especially with a win over A&M.

Alleva said after the game that Miles’ future had not hinged on Saturday’s result.

Alexander, Alleva and Blake Chatelain, the LSU board’s athletic committee chairman, met before Saturday’s game, agreeing that they would inform board members of the decision to keep Miles during the game.

The future of the marriage between Miles and LSU beyond next season is unclear. The coach’s buyout drops to $12.9 million on Jan. 1. It drops to $8.6 million after the 2017 season. His contract runs through the 2019 season.

Miles, meanwhile, hit the recruiting trail a day after the debacle surrounding his job ended Saturday. He visited several highly touted 2016 prospects, trying to repair his image and preserve a 2016 recruiting class currently ranked No. 2 nationally.

He even danced in front of one prospect.

“We’re going to go forward together and win championships here at LSU,” Alleva said in that postgame news conference Saturday.

“I agree with Joe,” Miles said moments later. “This team should be playing for championships. This is something that Joe wants to work towards fully. I’m right with him. It’s not enough to win occasionally. Let’s win all of the time.”