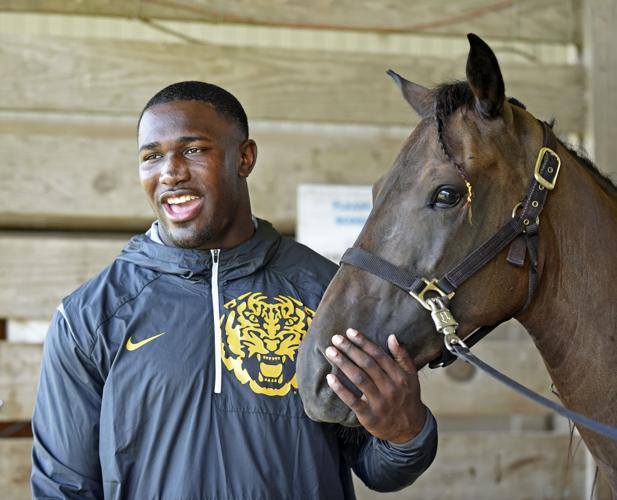 LSU linebacker Devin White tends to his horse, Daisy Mae, Aug. 17, 2018, at BREC's Farr Park in Baton Rouge. White said this week that if he and the Tampa Bay Bucs win Super Bowl LV, he intends to ride his new horse, Artistic Dream, for a victory lap with the Lombardi Trophy. 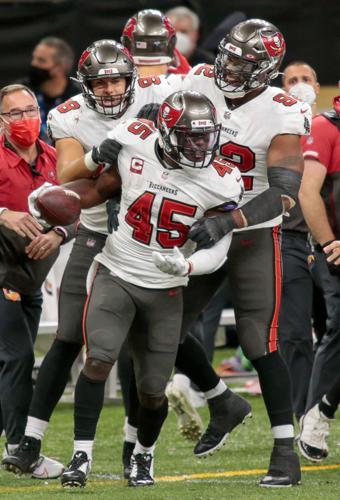 LSU linebacker Devin White tends to his horse, Daisy Mae, Aug. 17, 2018, at BREC's Farr Park in Baton Rouge. White said this week that if he and the Tampa Bay Bucs win Super Bowl LV, he intends to ride his new horse, Artistic Dream, for a victory lap with the Lombardi Trophy.

The North Webster-turned-LSU-turned-Bucs star has been raring to go since Jan. 24, when they shut down the Green Bay Packers in the NFC title game. So when he had last Sunday off, White took solace in his other happy place: on the bare back of one of his horses, Artistic Dream.

White had more than enough down time over the past five weeks. He missed Tampa Bay’s regular-season finale against Atlanta and the Bucs' first playoff game against Washington, having asymptomatically tested positive for coronavirus.

White’s first game post-quarantine came against the New Orleans Saints, and he soared in his inaugural playoff appearance. He tallied 11 tackles, a tackle for loss, a fumble recovery and his second-career interception, picking off Drew Brees — the quarterback he grew up watching as a kid.

White felt it coming. Rather, he knew it and called his shot before the pick.

That one play is a microcosm of what he’s done since Tampa Bay selected him as the fifth overall pick in the 2019 NFL Draft. White’s rise to NFL stardom isn’t a surprise.

Even before his first training camp started, he was told he was going to wear one of the green-dot helmets — a helmet with a radio transmitter inside so coaches can communicate plays from the sidelines.

“He’s been a leader all his life,” Buccaneers interior linebackers coach Mike Caldwell said. “If you know him, you know that as soon as you meet him. His personality just pops at you. He’s a guy that guys will follow. I always tell him, ‘Guys don’t follow you because we named you a captain. Guys follow you because of what you do daily and how you play on Sundays.’ ”

White's approximate value — Pro Football Reference’s imperfect metric that measures a player’s value to a team in a given year — was 8 last season. That was tied for the seventh-highest on the Bucs last year. Only then-quarterback Jameis Winston, Pro Bowl linebacker Shaq Barrett, receivers Mike Evans and Chris Godwin and tackles Demar Dotson and Donovan Smith had higher AVs.

As a whole, the Buccaneers’ run defense under coordinator Todd Bowles ranked No. 1 league-wide, despite the team’s 7-9 record. They only allowed two teams to total more than 100 yards rushing last season — the Saints twice and the Seattle Seahawks.

But White was far from satisfied, so he had a chat with Bowles.

White specifically worked on the middle part of his game, Caldwell said. White can more easily recognize offensive schemes and take advantage, just as he did on that Brees interception.

That, in turn, has made White “even more dynamic on the field,” he said.

Another bonus for 2020: White didn’t have to play with his knee brace anymore. He missed two games early in the 2019 season with a knee injury. The setback wasn’t severe, but he had to play with a bulky brace on his left leg for a while — something coach Bruce Arians said “was really hard for him to play with.”

White said of the brace: “I felt like a robot and felt like I needed extra help.”

With the brace gone and a better knowledge of the scheme in place, his production skyrocketed.

Darrel Williams' Super Bowl story? 'Everything comes great to the ones who wait'

Darrel Williams knows a thing or two (or three, or four) about patience.

He led the Bucs with 140 total tackles — a mark that ranked fifth league-wide. Ninety-seven of those takedowns were solo efforts, a number that ranked third among all defenders. White added nine sacks, 15 tackles for loss and 16 quarterback hits in a season that saw him earn second-team All-Pro honors.

White’s AV was tied with linebacker Lavonte David for second on the team at 14. Only Brady’s approximate value came in just ahead of the linebacking duo at 15.

"Whether it was leadership, making plays, I feel like I just took it a whole ’nother step. A lot of my thing was game-changing plays, being able to take over games, being able to set the tempo for the defense or for the whole team. I feel like that was a major part of my game. It really just comes from all heart. But I worked on a lot of things. I worked on play recognition, et cetera."

Part of White's improvement stems from the coaching he’s received at Tampa Bay. He called Caldwell “the most meaningful and most impactful coach” he’s ever had. Why? Caldwell — a Middle Tennessee product who is the uncle to LSU women’s basketball coach Nikki Fargas — played 11 years in the NFL, White said.

“He’s been in every situation. ... He’s willing to go above and beyond just to help me be the greatest,” White said, adding that this is his first time having a coach who played the game at this level. “I have the desire to be the greatest, so he’s going to help me put the work in. I’m really appreciative of him.”

From Billy Cannon to Dalton Hilliard to Kevin Faulk to Joseph Addai, pick a point in modern NFL history and it's a safe bet that an LSU runnin…

White’s collegiate position coach and defensive coordinator at LSU, Dave Aranda, may not have played the game past high school — Aranda retired from playing football early with myriad injuries — but countless lessons Aranda passed on to White remain imprinted.

Some of those teachings continue to help White now, he said, but the main thing that sticks with him is the lens through which he watches film. Instead of breaking down tape like an interior linebacker, Aranda told White to take the 10,000-foot approach.

“I watch film as if I was a defensive coordinator,” White said, saying that sets him apart.

White hopes that will be the difference maker Sunday, when he and his Tampa Bay teammates try to slow down Kansas City’s high-octane offense to give the franchise its second Lombardi Trophy.

If it happens, White already knows how he’s going to celebrate — by going back to his roots.

After White’s career concluded at LSU, he took one of his horses, Daisy Mae, on a joyride through campus and around the field at Tiger Stadium.

Daisy Mae tragically died from dehydration during the summer of 2019. This time, White plans on taking this potential victory lap with Dream — the horse he rode the Sunday before the Super Bowl.

“If we get a 'W,' I don’t care what they say. I’m putting the horse out and I’m going to hold the Lombardi Trophy and ride around the whole stadium,” White said. “They can do whatever they want to do, but guess what? I’m gonna be on top of the world.”