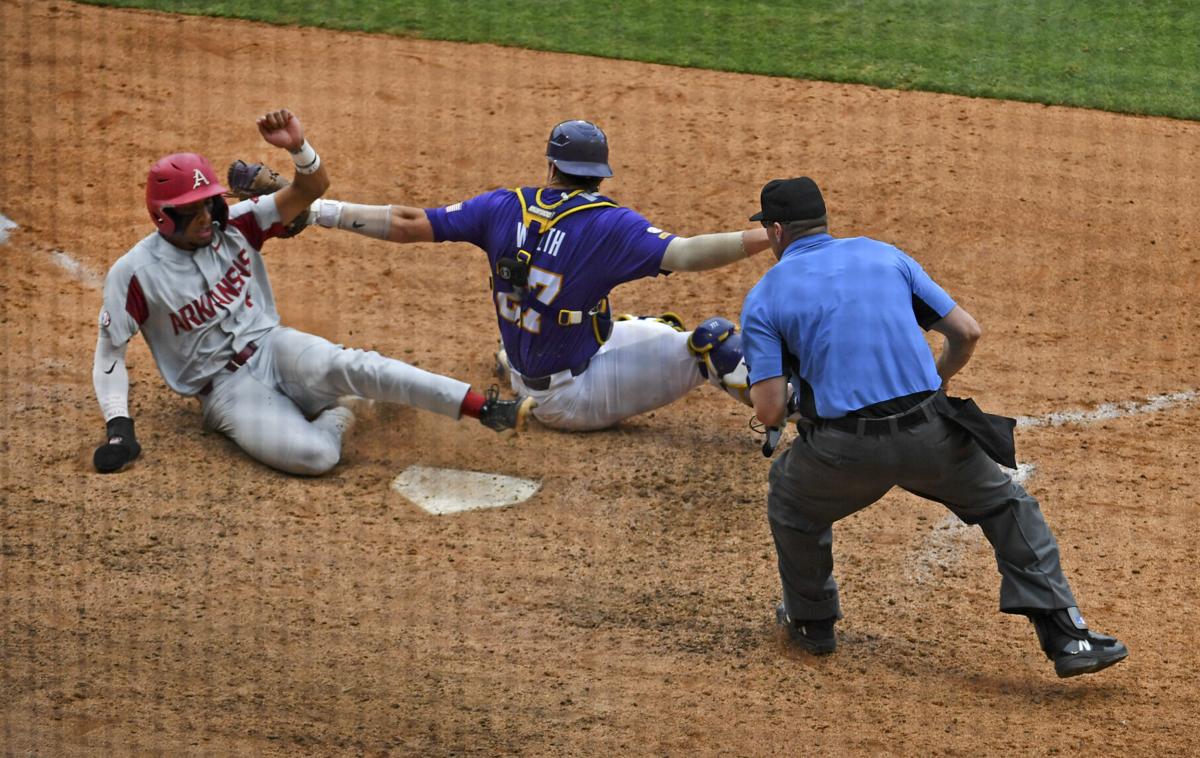 Arkansas shortstop Jalen Battles (4) is called safe at home by home plate umpire Marcus Pattillo as he scores behind LSU catcher Jake Wyeth (27) in the eighth inning, Saturday, May 1, 2021, at Alex Box Stadium on the campus of LSU in Baton Rouge, La. 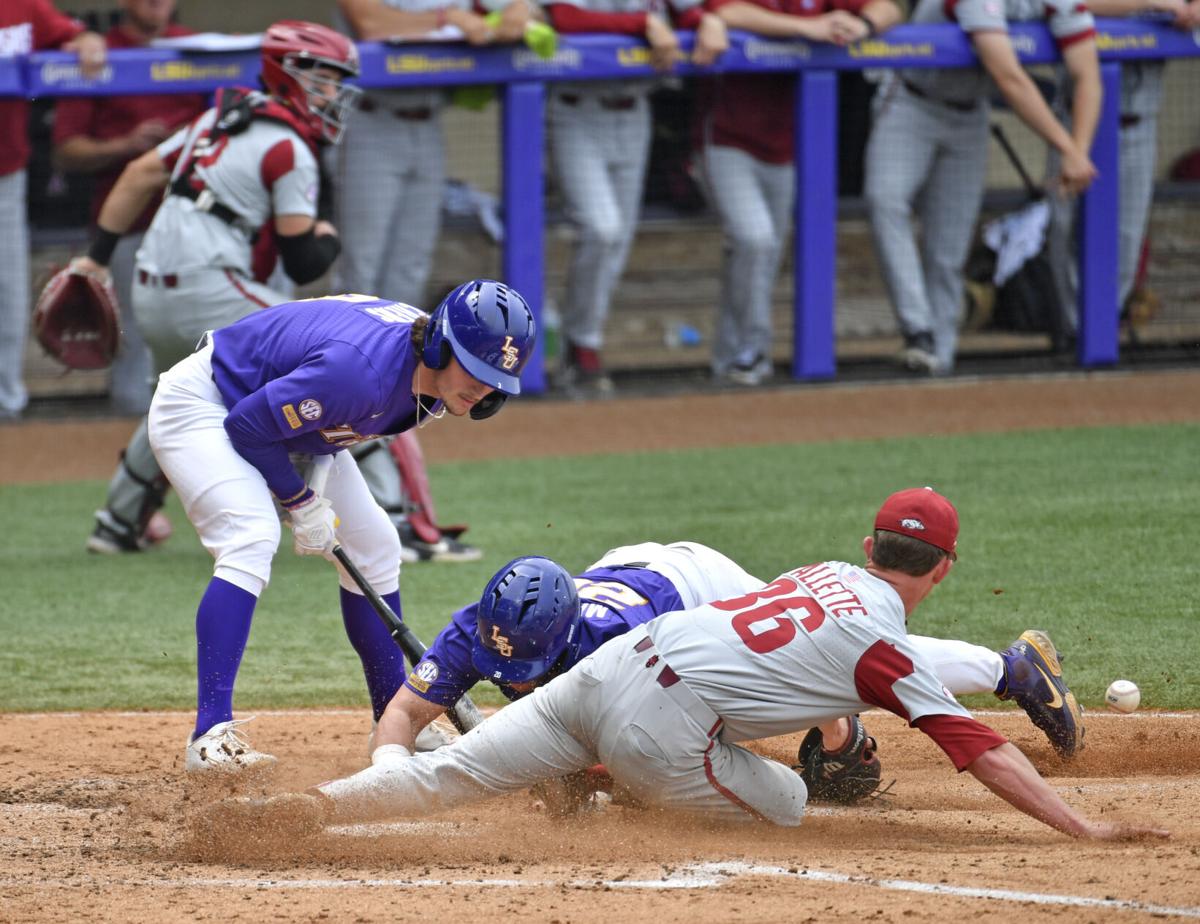 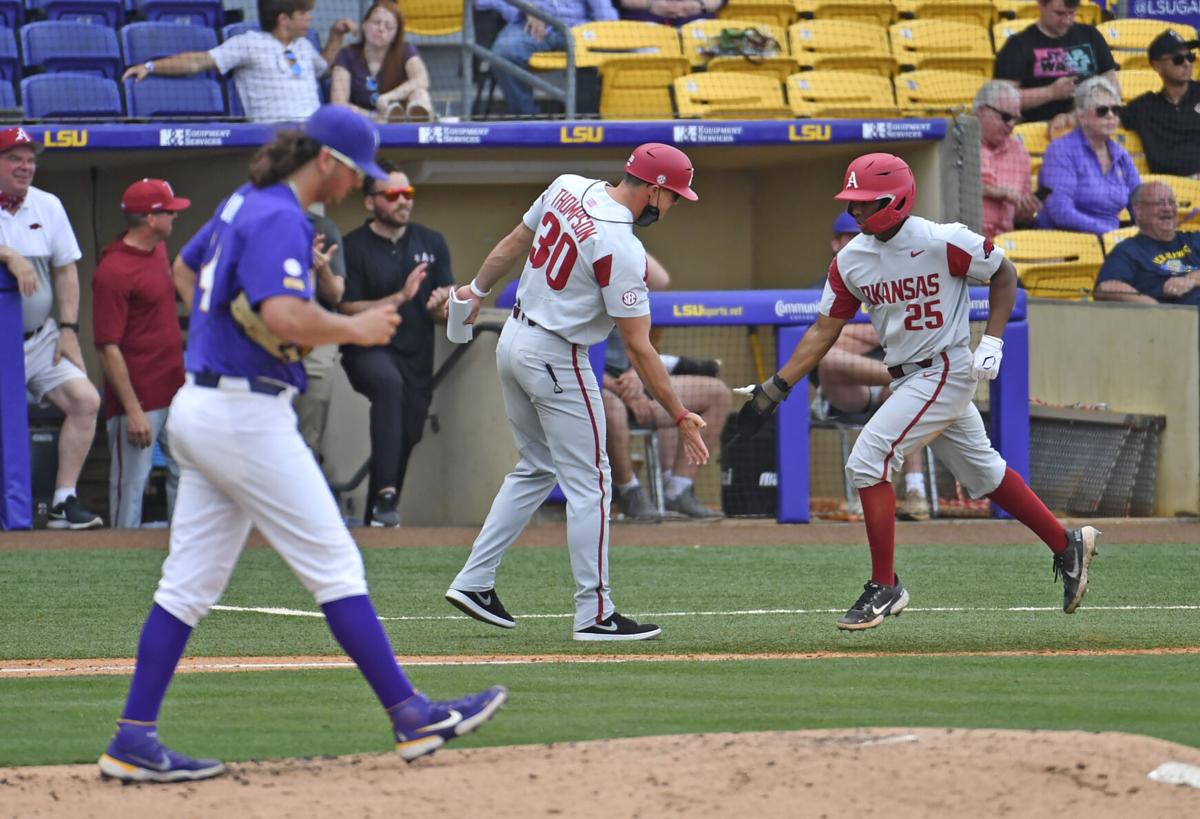 Arkansas shortstop Jalen Battles (4) is called safe at home by home plate umpire Marcus Pattillo as he scores behind LSU catcher Jake Wyeth (27) in the eighth inning, Saturday, May 1, 2021, at Alex Box Stadium on the campus of LSU in Baton Rouge, La.

There wasn’t much AJ Labas could do but try to pitch through Arkansas’ mounting lead. The fourth-year right-hander, one week after throwing a complete game, was delivering strikes. He worked ahead in most of the counts. And yet, the Razorbacks were hitting just about everything he tossed.

In the first inning Saturday, every player in the No. 1 Razorbacks' starting lineup batted as they scored five runs against Labas, perhaps the last thing LSU needed in the first game of a doubleheader with its precarious bullpen.

From that first inning, Arkansas only added to its lead. LSU lost 17-10, unable to complete a late comeback. At one point, the Tigers trailed by 14 runs. They eventually rallied to avoid their worst Southeastern Conference defeat since 2007.

LSU and Arkansas will play two games Saturday because of inclement weather forecast for Sunday.

Still, LSU (25-17, 6-14 SEC) sealed a series loss. It will try to prevent getting swept for the third time this season in the second game of the doubleheader, which begins at 6:30 p.m. inside Alex Box Stadium.

Before this one, Labas had given LSU a chance to win nearly every one of his outings. He had recorded nine straight quality starts, including the second complete game of his career last weekend against Ole Miss. He entered 3-0 with a 3.15 ERA, often able to protect LSU's shaky bullpen.

It appeared Labas might again even after allowing those five runs. But with LSU trailing 5-2 after scoring twice on wild pitches, Arkansas (34-7, 15-5) began the fifth inning with four straight hits, two of them on the first pitch of the at-bat.

Everyone — even, I suspect, the visiting Arkansas Razorbacks — went to LSU’s Alex Box Stadium on Friday night looking for glimpses of The Box of old.

Coach Paul Mainieri replaced Labas with freshman right-hander Blake Money. The next batter homered. Money struggled with his command, and by the end of the inning, Arkansas had taken a 12-2 lead. Nine of the runs were charged to Labas, a season-high.

The Razorbacks padded the score in the sixth. The first three batters reached against Money, forcing Mainieri to reach deeper into the bullpen. He chose senior right-hander Trent Vietmeier. Three more runs scored before he recorded the third out.

Staring at a 16-2 deficit and potentially its worst conference loss since Mainieri’s first season as head coach, LSU mounted a comeback.

At some point, one of them had to break.

But Arkansas’ initial lead was too large. Though LSU added another run in the eighth, the final three batters went down in order. The Tigers returned to their locker room to change before the final game of the series began an hour later.

The first LSU baseball game of the season with no coronavirus restrictions on attendance resulted in the biggest crowd of 2021 at Alex Box Stadium.