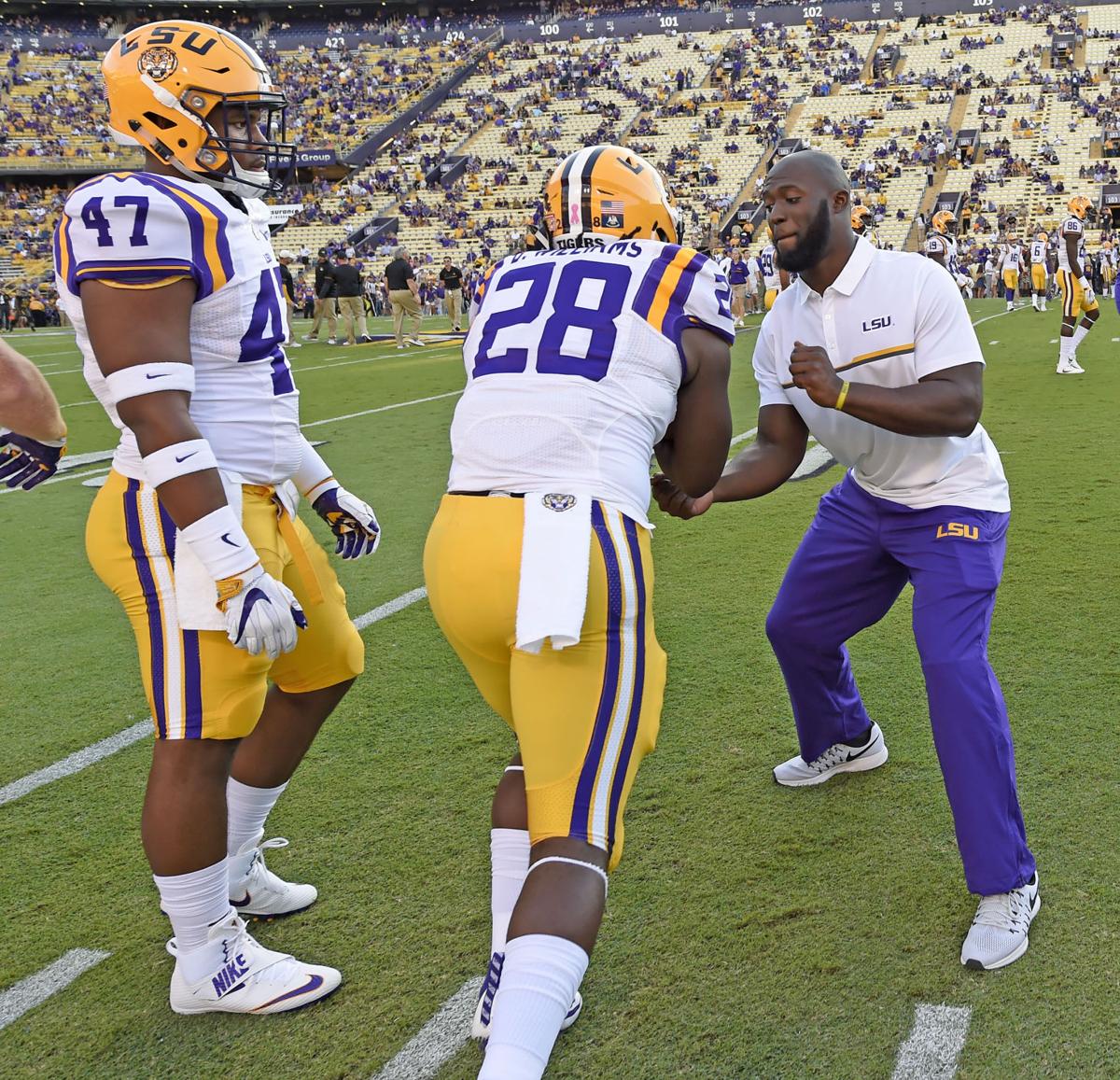 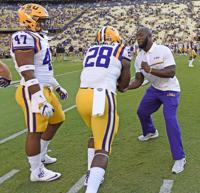 Not in uniform because of injury, LSU running back Leonard Fournette, right, works with LSU running back Darrel Williams (28) on a ball stripping drill during warmups before the LSU Missouri football game Saturday Oct. 1, 2016, in Tiger Stadium as LSU fullback Bry'Kiethon Mouton (47) waits his turn. 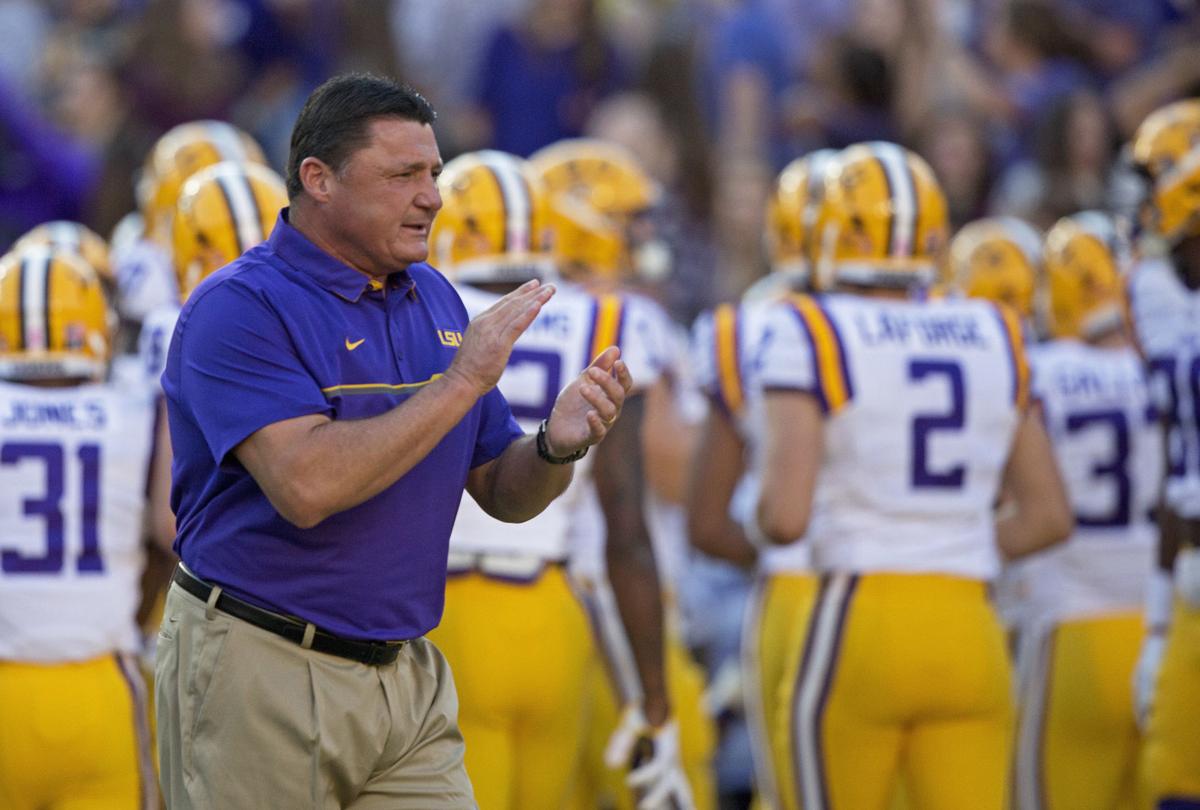 Not in uniform because of injury, LSU running back Leonard Fournette, right, works with LSU running back Darrel Williams (28) on a ball stripping drill during warmups before the LSU Missouri football game Saturday Oct. 1, 2016, in Tiger Stadium as LSU fullback Bry'Kiethon Mouton (47) waits his turn.

Fournette, the Tigers star junior, is not expected to play against Southern Miss, Orgeron said, but the coach does expect him to return at some point this season. Fournette, suffering from a lingering left high ankle injury, has not practiced in nearly three weeks.

"I don't think he's going to play. Hasn't practiced. I would not expect him to be ready this Saturday," Orgeron said.

Asked if him sitting out was only a precaution, he said, "No, he's not ready. He's just not ready. It's taking a little longer than we thought. I'm sure if he'd be ready, he'd be playing. He's not ready to even practice right now."

The Tigers (3-2) have a rough stretch following the clash with the Golden Eagles (4-2). They host Ole Miss, Alabama and then travel to Arkansas and Texas A&M over the final three weeks.

Fournette suffered a high ankle sprain during the second week of preseason camp. He bruised the ankle against Wisconsin and re-injured it again in the loss at Auburn on Sept. 24, the last time he saw the field. He missed Game 2 against Jacksonville State and Game 5 against Missouri.

Les Miles uses every means necessary to wiggle out of explaining a player's injury.

Orgeron could not put a percentage on Fournette's health.

"No. I can't do it. I thought he was going to play two weeks ago. I was wrong on that," said Orgeron, who told ESPN last Sunday that he expected Fournette to play at Florida. "I'm not going to try to do it. Going to let (head athletic trainer) Jack (Marucci) and them do it. We're just taking it day by day see how he progresses."

Jerry Punch, a physician who doubles as an ESPN sideline reporter, worked the Tigers' win over Mississippi State earlier this season and shed some light on Fournette's ankle injury.

The bruising against Wisconsin to the previously sprained ankle compounded the healing process, Punch said.

"The high ankle sprain is a lot more painful, difficult than the low ankle sprain," Punch said during LSU's win over the Bulldogs on ESPN. "Takes a lot longer to heal than a low ankle sprain. It involves a membrane between the two bones in the lower part of the leg. You get bleeding in between a membrane.

"It's very difficult, very painful to push off," he continued. "When he got hit on the outside part of the ankle against Wisconsin, he had more swelling, which created more pain."

As if to punctuate what has already been a tumultuous and emotional football season for LSU,…

LSU's live Tiger mascot, Mike VI, passed away on Tuesday, and Orgeron led off the SEC teleconference with a comment about his death.

Orgeron used to visit Mike's cage as a child.

"Our thoughts and prayers are with Mike," Orgeron said. "He passed away. A tremendous tradition LSU has. I remember growing up hearing that Tiger roar in the cage across Tiger Stadium. We're going to miss him."

From sideline to the booth, LSU's changes have players, coaches adjusting on the fly

Despite a record-breaking night against Missouri in Week 5, setting the school mark for yards (634) in a Southeastern Conference game, LSU’s o…

Pregame primer: All the storylines ahead of LSU vs. Southern Miss at Tiger Stadium

It's back to work for LSU football, and after an offensive explosion against Missouri and a week off, they have a lot to live up to. Here is a…