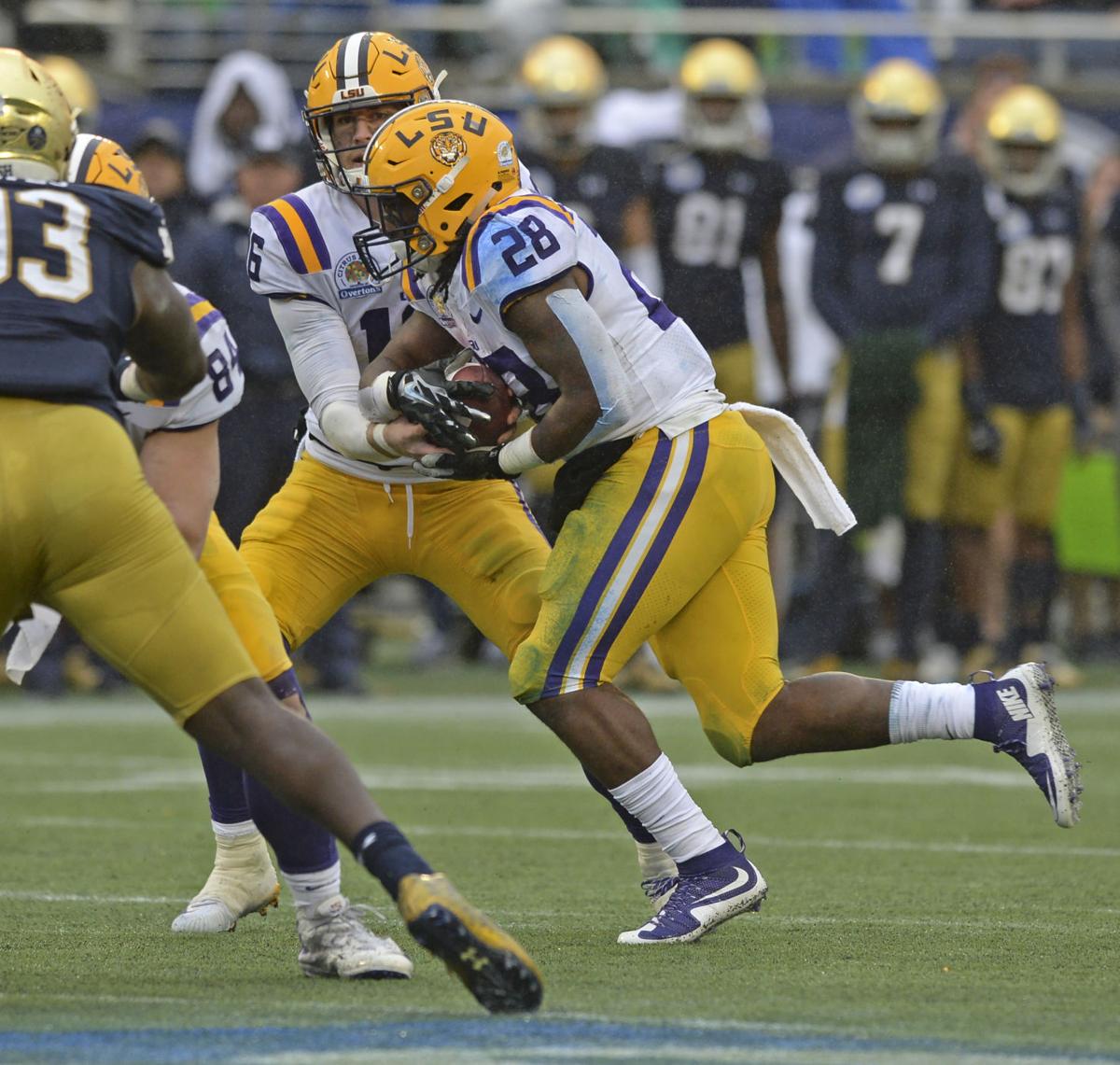 LSU quarterback Danny Etling (16) fakes the handoff to LSU running back Darrel Williams (28) in the second half, Monday, January 1, 2018, in the Citrus Bowl at Camping World Stadium in Orlando, Fla. Notre Dame won 21-17. 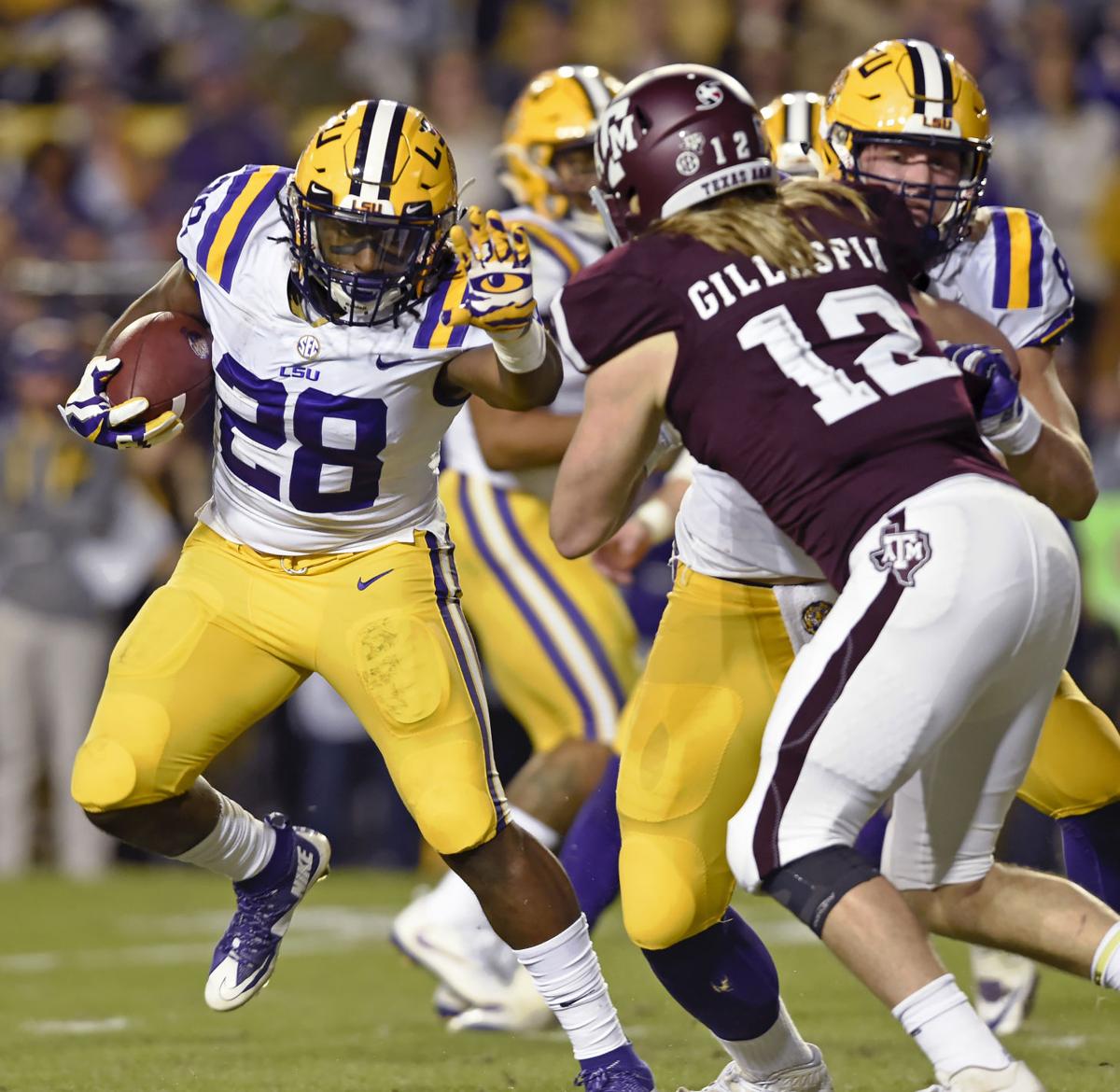 LSU running back Darrel Williams (28) runs the ball during the first half of LSU's football game against Texas A&M at Tiger Stadium Saturday Nov. 25, 2017, in Baton Rouge, La..

MOBILE, Ala. — Most players invited to the Senior Bowl all share at least one quality: They were starters in college.

Take for instance three of the four LSU participants in this week’s Senior Bowl. Defensive linemen Christian LaCouture and Greg Gilmore combine for 62 starts. Receiver DJ Chark emerged as a starter in 2016 and carried the load as a senior last season.

Williams and the more than 110 others invited to the Senior Bowl arrived late Sunday night or Monday morning for an all-important week for their futures. No one here — none of these two-time All-conference players, career starters and All-Americans — has more to prove than the Tigers running back out of Marrero.

A career backup in Baton Rouge to heralded running backs Leonard Fournette in 2014-16 and Derrius Guice in 2017, Williams got most of his six starts because of injuries to the starters.

You don’t have to explain the significance of this week to the 6-1, 229-pounder.

“I want to show everybody that I’m not just a backup back,” Williams said. “I can be a starter anywhere on any team. All I need is the opportunity to show everybody. Everybody’s going to see some of my skills that they didn’t see at LSU.”

They’ll see his skills starting on Tuesday’s first day of practice and culminating with Saturday’s game, televised on NFL Network live from Ladd-Peebles Stadium. At this event, practices are even more important than the game. NFL executives and scouts encircle the stadium for 90-to-120-minute practices each afternoon.

The Texans staff, led by fourth-year coach Bill O'Brien, will coach the South team, while Vance Joseph, the Broncos first-year coach and brother to LSU receivers coach Mickey Joseph, will guide the North.

Some of the most impactful moments happen away from the field. That includes Tuesday morning’s weigh-in. Even more significant are the individual meetings with NFL personnel at the Senior Bowl hotel, the Renaissance Riverview Plaza in Mobile’s bustling downtown.

Those began Sunday night and were on-going Monday in the lobby and ballrooms of the expansive hotel.

“A lot of interviews,” Gilmore said. “He gave me a lot of great advice. He himself excelled at the Senior Bowl.”

So did so many others who wore the purple and gold. Linebackers Deion Jones and Duke Riley found themselves in the spotlight in Mobile in 2016 and 2017, respectively, helping them soar up draft boards as Day 2 selections.

“It’s something that’s really big to my life and has a huge impact on what happens to me in the draft,” LaCouture said of this week. “I know Debo and Duke killed it. They’re Day 2 picks. You look at guys like that who kill it (at the Senior Bowl). I want to take one day at a time and do my best, show the techniques coaches have taught to me.”

Why Ensminger (finally) took LSU's OC job and, more importantly, what to expect

LaCouture, Gilmore and Williams were all late additions to the game, receiving their invitation in the past 10 days. Williams learned of his invitation on Jan. 14 during the Saints’ heartbreaking playoff loss to the Vikings.

He received it in part because of LSU’s reputation at producing pro backs, said Phil Savage, the game's executive director.

“You’re not really supposed to grade positions at certain schools," Savage said, "but obviously LSU has a track record of producing running backs, and some running backs that were not featured players there ended up making it in the league."

Williams had two important people in his corner, both “advocating” for him, Savage said. LSU athletic trainer Jack Marucci is one of Savage’s “best friends in football,” and LSU's new pass game coordinator, Jerry Sullivan, is a longtime NFL assistant who's respected in the industry.

“He’s a gifted player,” Savage said of Williams. “He’s got the right mentality too in terms of knowing he’s going to have to do some dirty work on special teams to ultimately make it. We had a spot that opened up and felt like he was deserving of it.”

Williams’ versatility is one of his strongest assets. He was second on LSU last season with 22 catches, and he’s shown quick bursts to go with between-the-tackles running.

“The display of Darrel Williams’ character, work ethic, loyalty, humbleness he showed since being a John Ehret Patriot to now will be another display of ‘Beast Mode’ in the NFL for over 10 years,” said Corey Lambert, Williams’ high school head coach at John Ehret. “Darrel is what the NFL is looking for.”

Williams' official weight Tuesday morning will be of interest. He dropped about 20 pounds after his junior year, replacing late-night snacks Raising Cane’s and Taco Bell with grilled chicken and baked fish. He played this past year at about 225-230 pounds.

Because of that weight loss and Guice's injury issues, Williams nearly eclipsed his rushing total from his first three years (851) in his last season (820). Sure, that’s impressive, but this week in Mobile can potentially have an even bigger impact.

Draft projections vary less than a month into the four-month pre-draft process.

CBSSports.com lists Williams as the 17th-best running back in the draft class, just ahead of Alabama’s Bo Scarborough as a Day 3 selection. WalterFootball.com does not include Williams in a ranking of the draft’s top 26 backs, and Williams is absent from BleacherReport’s top 10 running back list.

“He just needs a shot,’ said Shawn Galmore, who coached Williams at John Ehret. “Once he gets a chance, he’s going to make a ball club.”