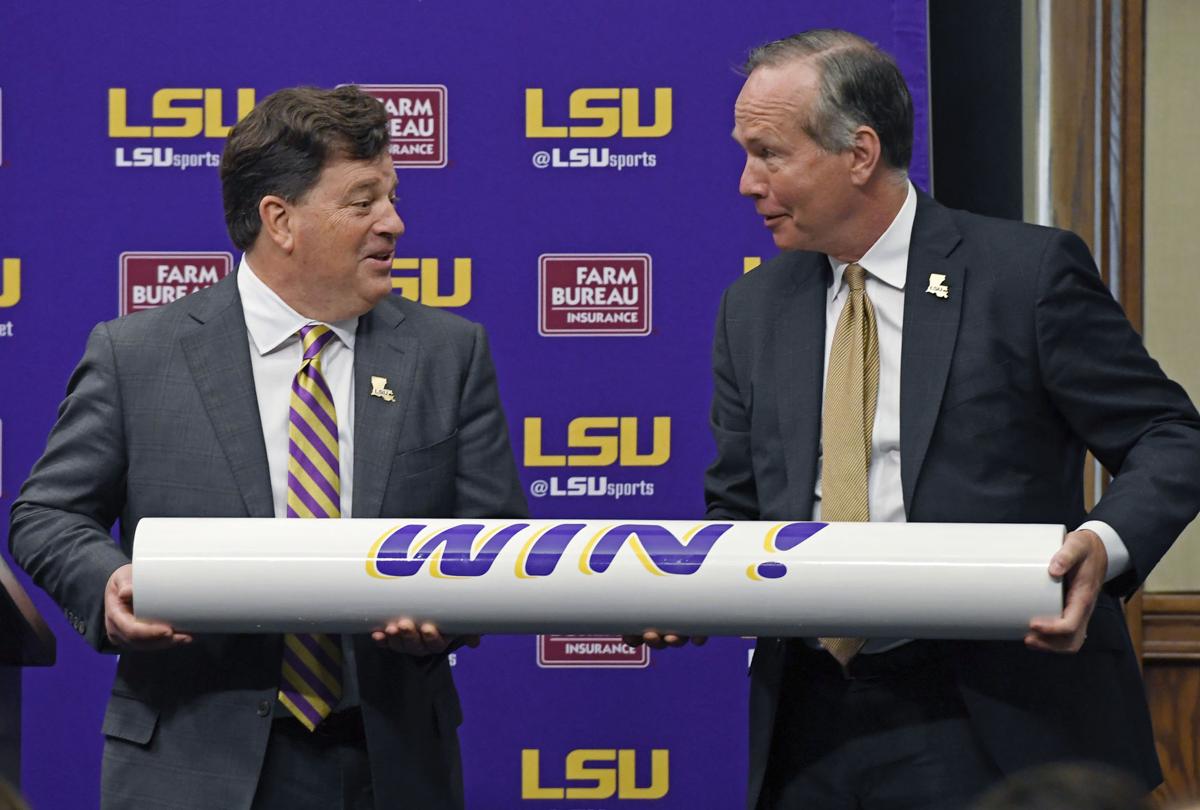 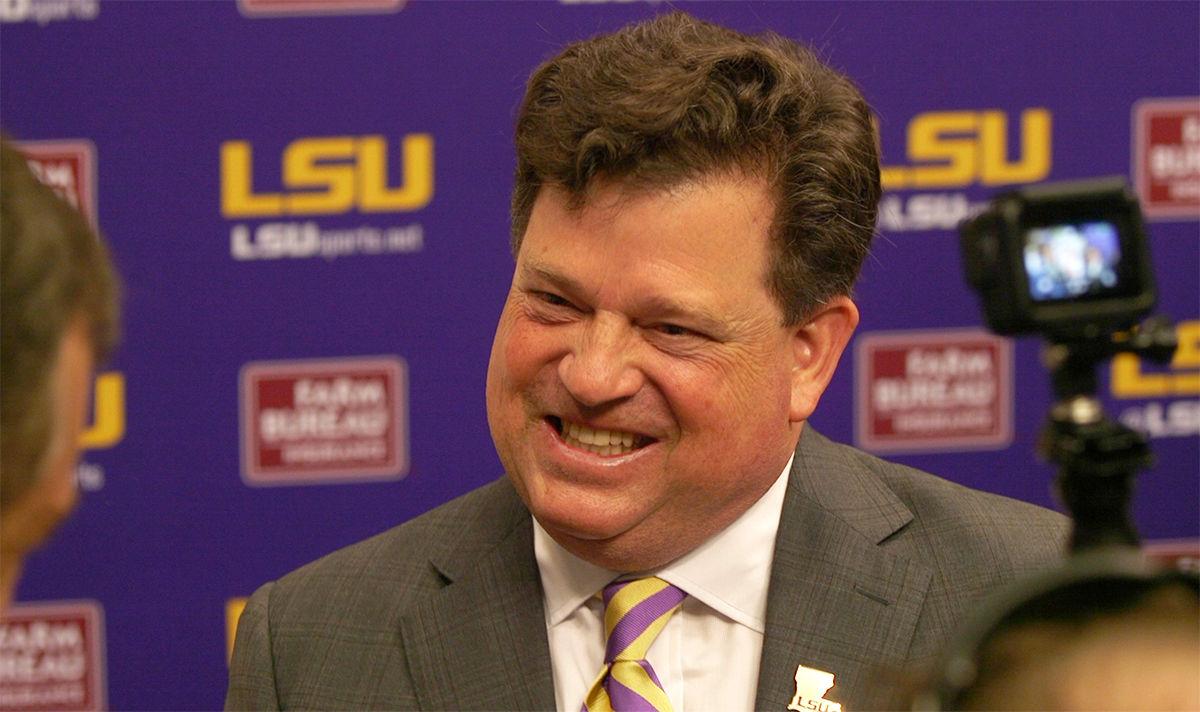 LSU athletic director Scott Woodward is introduced to the media at a news conference Tuesday, April 23, 2019, at the university's Manship School of Mass Communications. 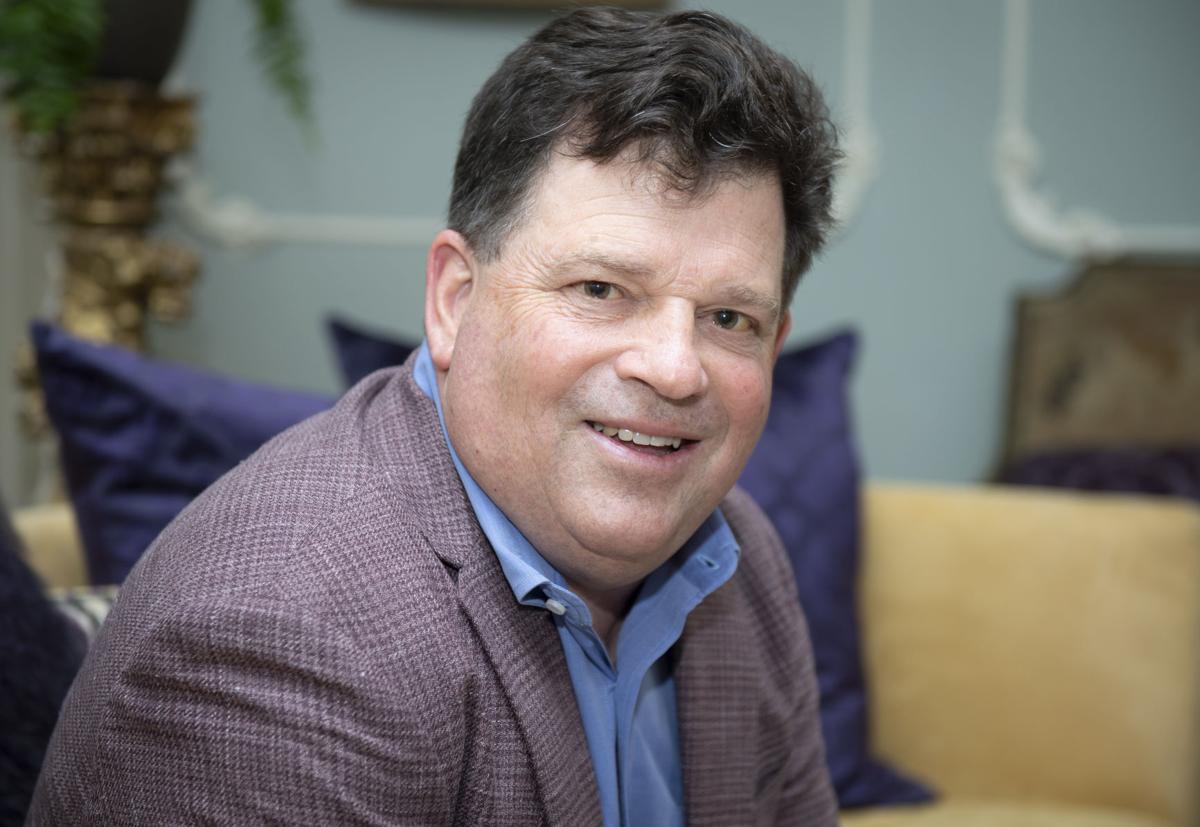 The new LSU athletic director Scott Woodward at a party held at James Carville's house in New Orleans on Friday, May 17, 2019. 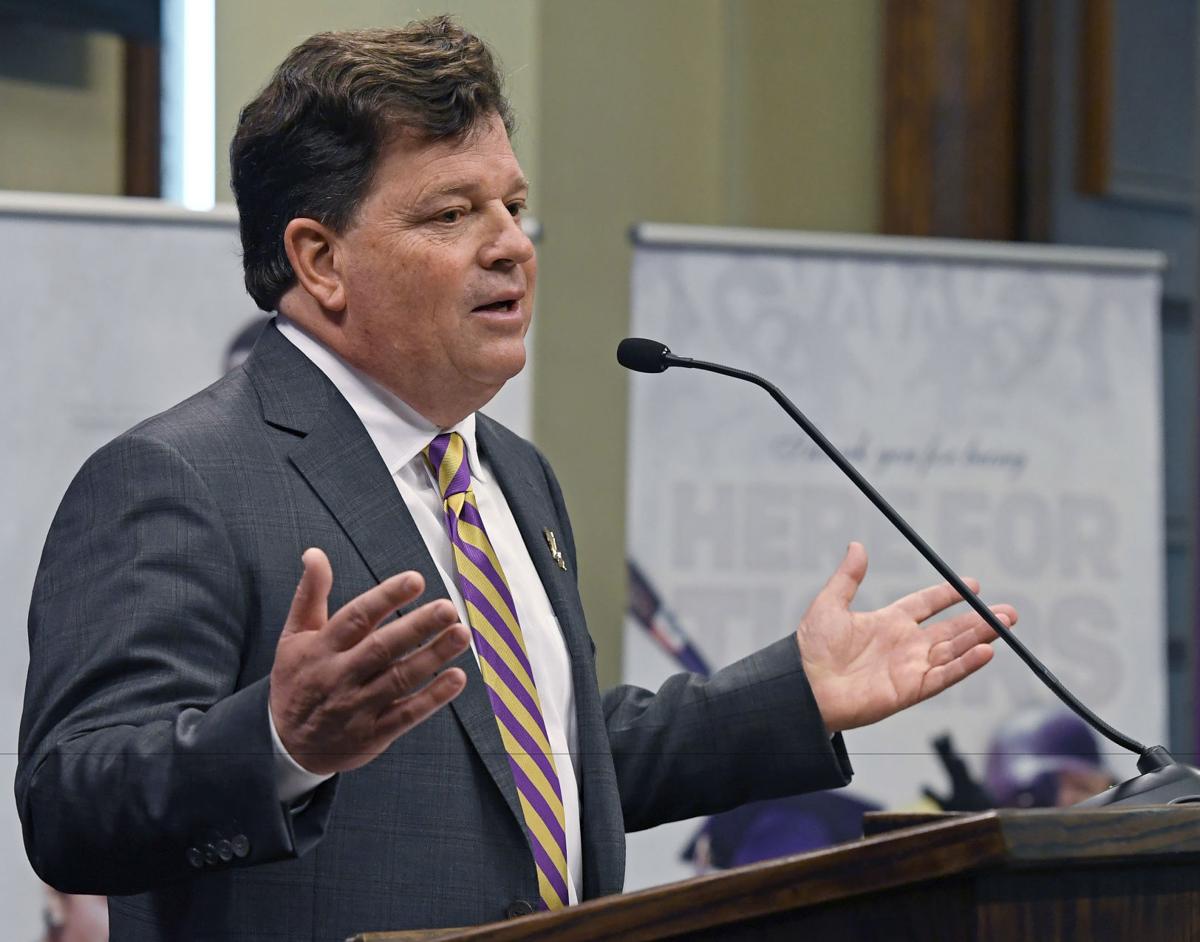 Scott Woodward answers questions after being introduced as the new director of athletics for LSU Tuesday April 23, 2019, in Baton Rouge, La. 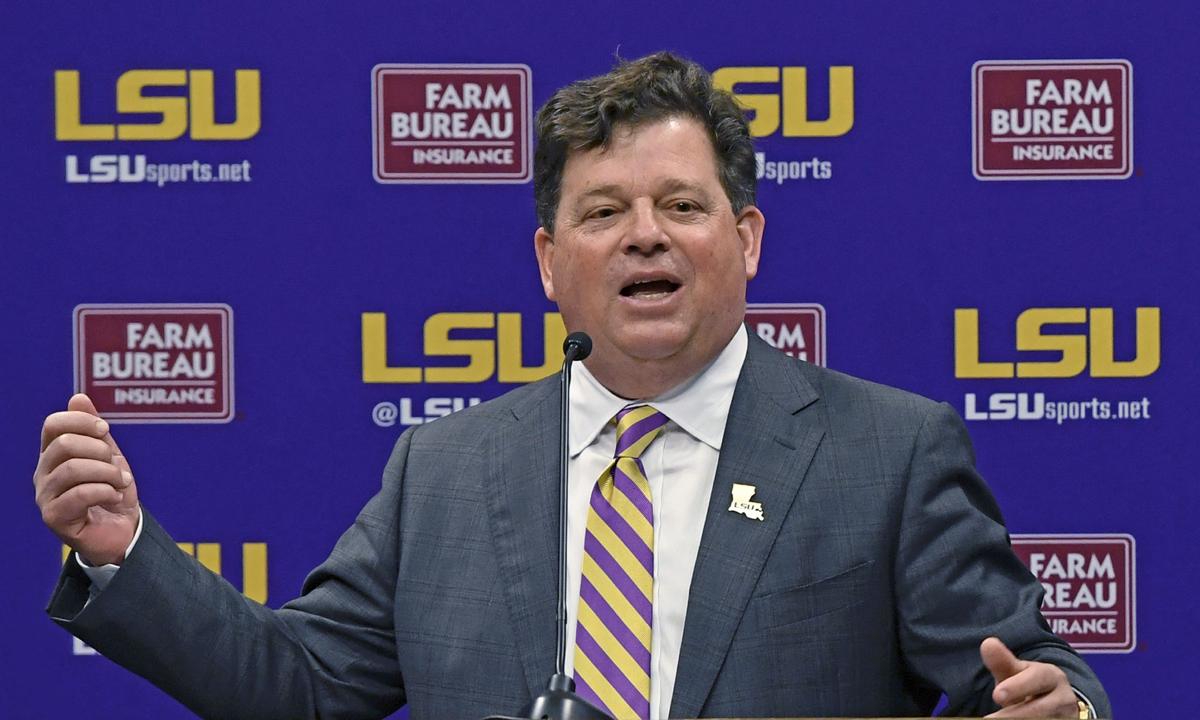 LSU athletic director Scott Woodward is introduced to the media at a news conference Tuesday, April 23, 2019, at the university's Manship School of Mass Communications.

The new LSU athletic director Scott Woodward at a party held at James Carville's house in New Orleans on Friday, May 17, 2019.

Scott Woodward answers questions after being introduced as the new director of athletics for LSU Tuesday April 23, 2019, in Baton Rouge, La.

There is an old Vulcan proverb in the Star Trek universe: Only Nixon could go to China.

In LSU terms, only former athletic director Skip Bertman with his clout as a successful baseball coach could create the Tradition Fund back in 2003, requiring fans to pay for the right to buy football season tickets as was done at other schools for years.

In modern LSU terms, only popular new AD Scott Woodward could end the annual $7 million (or more) transfer the athletic department has been making the past seven years to LSU’s academic coffers.

LSU's Scott Woodward says fund-transfer policy is being re-evaluated; It's a 'poor way to run a university'

In interviews with The Advocate and Tiger Rag, Woodward said Monday the athletic department is looking to reevaluate the ritual of annual $7 million-plus transfers to LSU’s academic coffers. Any such change must come with approval of President F. King Alexander and the LSU Board of Supervisors.

But you have to believe this was something everyone at LSU understood was going to happen eventually when Woodward became athletic director in April. This was news to those of us outside the campus, but not beneath LSU’s Spanish-tiled roofs.

“It’s not” commonly done by other schools, Woodward said. “We have had long discussions about that. These are discussions we will have with the board and in the president’s office.

The yearly donations began in 2012 under then-athletic director Joe Alleva. At the time under the administration former Gov. Bobby Jindal, higher education funding was being slashed by the state every year. The university kept coming to athletics for more and more money, so Alleva basically said, “Yes, we’ll help you out, but we have to put a cap on this.”

Under current Gov. John Bel Edwards, higher education funding has rebounded. Meanwhile LSU’s athletic expenses for salaries and travel and innumerable other things have risen. And academics’ thirst for cash is one that can’t be satisfied with a fire hose belching out $100 bills 24/7.

“This needs to be run as an enterprise,” Woodward said. “Recently you’ve seen how much we’ve invested in our student-athletes — unlimited meals, cost of attendance, you name it. It’s covered in a positive fashion from our TV contracts and generous donors. But it’s not ending.

“We want to continue to focus on our competition in Tuscaloosa and Gainesville and all parts of the SEC.”

The timing of this news is not the best for LSU, coming less than a week after the opening of the renovated football operations building and athletic nutrition center. The whole project cost $28 million and came under criticism at a time when the LSU System has a $1.7 billion backlog of deferred maintenance.

Woodward is an LSU alum, an LSU guy through and through. And he stressed he isn’t for never helping academics with some extra funding. Given the wave of acclamation he rode into office on, he can probably use some of that goodwill to help fundraising efforts for LSU athletics and academics.

“We talked about that in terms of one-time money instead of recurring money to improve the overall campus,” Woodward said. “We are happy to participate in that as we have in the past.”

But his primary worry is helping get the football program to where it can compete with and beat Alabama on a fairly regular basis, finally get in the College Football Playoff, return to the Final Four and the College World Series, and so on.

Not having to write a $7 million check to academics every year will help him do that.

There are a few facts to remember here:

1. LSU’s new $28 million facilities were paid for with private donations through TAF.

2. LSU athletics receives no state funds or student fees. All its funding is self-generated. Athletics at every other public school in Louisiana, yes, all those schools with very real and serious infrastructure issues, are subsidized to some degree.

A quick check Monday afternoon with reporters who cover three of LSU’s biggest Southeastern Conference rivals — Alabama, Florida and Ole Miss — revealed how LSU has been doing things isn’t exactly the way those schools do them. All three schools pay for their scholarships, yes. But only Florida makes regular, albeit discretionary, fund transfers to academics. Like at LSU, those schools’ athletic departments are self-sustaining.

LSU academics needs to re-learn to sustain itself without the crutch of LSU athletics’ annual donation. The department should give what it can when it can, but the mission statement is to win. And the more LSU wins, the more it may help the university in the long run. Alabama’s rise in fundraising and out-of-state applications during its decade of high-level football success is a prime example of that.

Perhaps instead of an annual check, LSU should bet on that long-term investment.

LSU opens up new $28 million football operations building; How did the sleeping pods get made?

The idea for sleeping pods in LSU's $28 million renovation of its football operations building came from a travel issue nearly three years ago.