LSU head coach Ed Orgeron jumps up and down to amp up his players before they take the field for kickoff against South Carolina, Saturday, October 24, 2020, at LSU's Tiger Stadium in Baton Rouge, La. 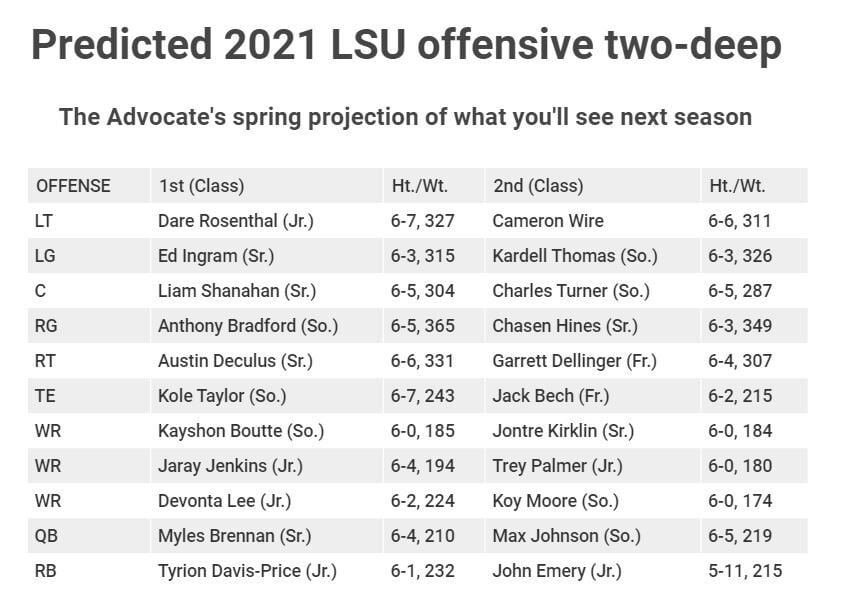 LSU will play its first spring football game since 2019 — a year after the coronavirus pandemic knocked out last year's scrimmage — and the Tigers are yet again a transitioning team filled with new key assistant coaches and players.

The program's five-week, 15-practice spring camp will end on Saturday with its (usually) annual spring game, which will kick off at Tiger Stadium at noon.

LSU's new multiple-style defense and the offense's return to its 2019 schemes will be a large focus of Saturday's scrimmage. There are also plenty of position battles that will play out. Hints of just how LSU's depth chart will look when the Tigers open the 2021 season at UCLA have trickled out these past few weeks, and, below, is our best guess at how the roster will be organized come August.

So we'll start with offense first, a unit that started out fast in 2020 but became inconsistent after starting quarterback Myles Brennan was lost for the season with a torn abdominal muscle. A four-man quarterback competition welcomed Brennan back this spring, and, while the entire starting offensive line returned for another season, the Tigers have some spots to fill at wide receiver and tight end.

If you want to check out our projected defensive two-deep, click here.

Offensive line: LSU's depth on the offensive line is very similar to how experienced the unit was going into the 2019 season. The Tigers returned four starters from the 2018 season and thrived in the team's transition to a modern spread offense. Now, thanks to the NCAA's COVID-19 extended eligibility ruling, every starter from the 2020 season decided to return. Austin Deculus will be a fourth-year starter at right tackle, and, a year after being the only returning starter up front, he says this veteran group has what it takes to reclaim the Joe Moore Award for nation's top offensive line. Expect left tackle Dare Rosenthal, left guard Ed Ingram and center Liam Shanahan to have their positions locked up. Each of them could've left for the NFL and more than likely all have been selected somewhere in the draft. Chasen Hines, who started in nine games at right guard last year, has been significantly pushed by Anthony Bradford, a third-year sophomore and extremely athletic 6-foot-5, 365-pound lineman from Michigan. LSU coach Ed Orgeron has been increasingly complimentary of Bradford this spring, and he told WNXX-FM, 104.5's "Off the Bench" Tuesday morning that Bradford is LSU's "best one-on-one blocker" right now. We're giving Bradford the edge right now that he'll continue to improve and take over at right guard by the beginning of the season.

Depth at offensive line was nearly a significant problem this year. But with all the starters returning, the Tigers have plenty of options and can let their talented youth develop another year. Early enrollee Garrett Dellinger, a four-star tackle from Michigan, has been tabbed by Orgeron as someone who could play as a true freshman. Kardell Thomas, once a five-star recruit, has been recovering from ankle surgery the last two seasons. Backup center is really the only major question on the offensive line. Sophomores Charles Turner and Marlon Martinez have both been working behind Shanahan, Orgeron said, but neither are yet developed enough to make a run at overtaking the position.

Meet Maason Smith: LSU's Keto-following 5-star defensive tackle who 'is mean as hell on the field'

Quarterback: LSU hasn't had a four-man quarterback battle since Joe Burrow transferred in from Ohio State and won the starting job in 2018. Myles Brennan was a part of that battle, and he waited two seasons before finally getting his shot as QB1 in 2020. Despite suffering a season-ending abdominal tear in Week 3 against Missouri — an injury so rare it could've produced a new surgery named after him — Brennan still ended up being LSU's leading passer with 1,112 yards, 11 touchdowns and three interceptions. That's why he gets our edge as starting quarterback in 2021: when healthy, Brennan has already shown he can be an elite passer.

Still, Max Johnson and TJ Finley — the sophomores who replaced Brennan in 2020 — have been splitting equal reps with the first team along with early enrollee Garrett Nussmeier. Orgeron said the four quarterbacks will also share equal snaps with the first team during Saturday's spring game. The head coach said the competition will continue into fall camp.

Orgeron gave the same timeline in the 2018 quarterback competition, and he didn't formally announce Burrow as LSU's starter until the Monday before the Tigers played Miami. There's certainly a competitive part of this; Orgeron's not alone in thinking competition breeds success. But LSU's quarterback room was cut in half when Justin McMillan and Lowell Narcisse transferred during fall camp. Depth was an issue. At one point in 2018, while Brennan was nursing a back injury, walk-on Andre Sale was LSU's only option behind Burrow. Coaches have accepted that the game is now in the NCAA transfer portal era. McMillan went on to start in six games at Tulane and Narcisse is now at UT-San Antonio. Quarterbacks find places to play. To be clear, no quarterback at LSU has given any indication they'll transfer. Aside from Nussmeier (true freshman don't normally speak to the media), they've all spoken about their dedication to the ongoing competition.

That LSU is building a stable of quarterbacks can be seen as a proactive response to the roster management in today's game. Three underclassmen behind Brennan. Five-star Walker Howard is committed to the 2022 class. Quarterback royalty Arch Manning is a top target in 2023. The depth issues at quarterback at LSU are no longer. It's a quarterback competition LSU will gladly welcome.

The backfield: That LSU didn't have a 1,000-yard rusher last season was perhaps the most glaring statistic from the team's offensive performance in 2020. It was the first time an LSU running back didn't reach the milestone since 2012. In what was supposed to be breakout years for Tyrion Davis-Price and John Emery Jr., the whole unit collectively underperformed. The run game is expected to be revamped in Peetz's offense, which is expected to mirror much of what LSU did in 2019. You could really call Davis-Price and Emery starting running backs 1A and 1B. Emery has the all-around tools to be a threat as a runner and receiver, and he could emerge as LSU's top playmaker at running back in 2021 if he reaches his potential. Both backs have been battered this spring. Davis-Price had a brief minor injury. Emery has been mostly noncontact while recovering from offseason surgery. Expect that to be a factor in how much both running backs play in the spring game. Orgeron said Tuesday evening Emery won't see live action. Sophomore Tre Bradford is also dealing with a hamstring injury, which makes former walk-on Josh Williams one of the main available options.

The bulk of LSU's depth will arrive in the summer. Armoni Goodwin and Corey Kiner — both four-star recruits who ranked in the Top 10 nationally at their position — will almost certainly contribute as true freshman in 2021. But keep an eye out for wide receivers in the backfield — a tricky move former passing game coordinator Joe Brady used at LSU in 2019, as well as his first season as offensive coordinator with the Carolina Panthers with Peetz.

Arik Gilbert visited LSU, but no decision yet on the former five-star tight end's next school

Wide receivers/tight end: LSU has lost first-round NFL talent at wide receiver with the departures of both Terrace Marshall and Ja'Marr Chase (who opted out for the entire 2020 season). Racey McMath also declared for the NFL draft, which means the Tigers have lost all three receivers who were at the top of the depth chart entering 2020's fall camp. Kayshon Boutte has already showcased he can be an elite wide receiver. The returning sophomore set LSU and Southeastern Conference single-game records for receiving yards (308) in LSU's 53-48 win over Ole Miss in the season finale. Expect him to be the top target for whomever wins the quarterback battle. Jaray Jenkins is likely LSU's second option right now. The 6-foot-4, 194-pound junior was LSU's third-leading receiver in 2020, and he showed signs of big-play material with 23 catches, 397 yards and two touchdowns.

The rest of the receiving corps is a wide-open range of small-sample, young or incoming talent. Jontre Kirklin had three touchdowns last season. The senior showed he can be an explosive player when he caught a flea-flicker touchdown against Vanderbilt. Koy Moore, once the top-rated receiver in Louisiana, played in every game last season and showcased his speed by returning three punts. Trey Palmer, like Emery, has received praise from Orgeron but hasn't yet hit his full potential. Any one of those receivers — including the five incoming recruits from the 2021 class — could emerge as LSU's third receiver. We're picking a dark horse. Devonta Lee has returned to receiver after the former two-way Amite star flipped from receiver to linebacker to tight end and elsewhere in the last two seasons. The 6-foot-2, 224 junior has earned praise this spring. Derek Stingley Jr.'s father, Derek Sr., told "Off the Bench" Tuesday that Lee has been the "MVP" of spring football. Lee has made impressive catches and has been tough to tackle, and, although he isn't a deep threat, Stingley said he's got strong hands and makes circus catches. Lee could be a solid compliment in the middle of the field, opening up options for Boutte and Jenkins.

LSU's tight end room may not appear to be as talented since former five-star recruit Arik Gilbert left the team last year by entering the NCAA transfer portal. There's still a chance that Gilbert could return. But, for now, the LSU offensive coaching staff is trying to develop sophomore Kole Taylor — a 6-foot-7, 243-pound tight end who is most known for getting his shoe thrown at the end of the Florida game. Orgeron has said he thinks Taylor will be an NFL tight end. Mangas said he shows a lot of promise and can create the mismatches at tight end like Thaddeus Moss did in 2019. Taylor, who caught six passes for 36 yards last year, just needs to work on his techniques and grow into his lanky frame. There's depth enough with more block-centric tight ends like Nick Storz for Peetz to use portions of the playbook that use multiple tight ends for short-yardage situations. But also expect for LSU to use the extremely athletic Jack Bech as a tight end/F-back hybrid. The 6-foot-2, 215-pound freshman from St. Thomas More doesn't arrive on campus until June, but he's the type of player that can help LSU create the mismatches that benefitted the scheme in 2019.

A year after the coronavirus pandemic canceled LSU's spring football game entirely, the university announced Monday that fans will be able to …