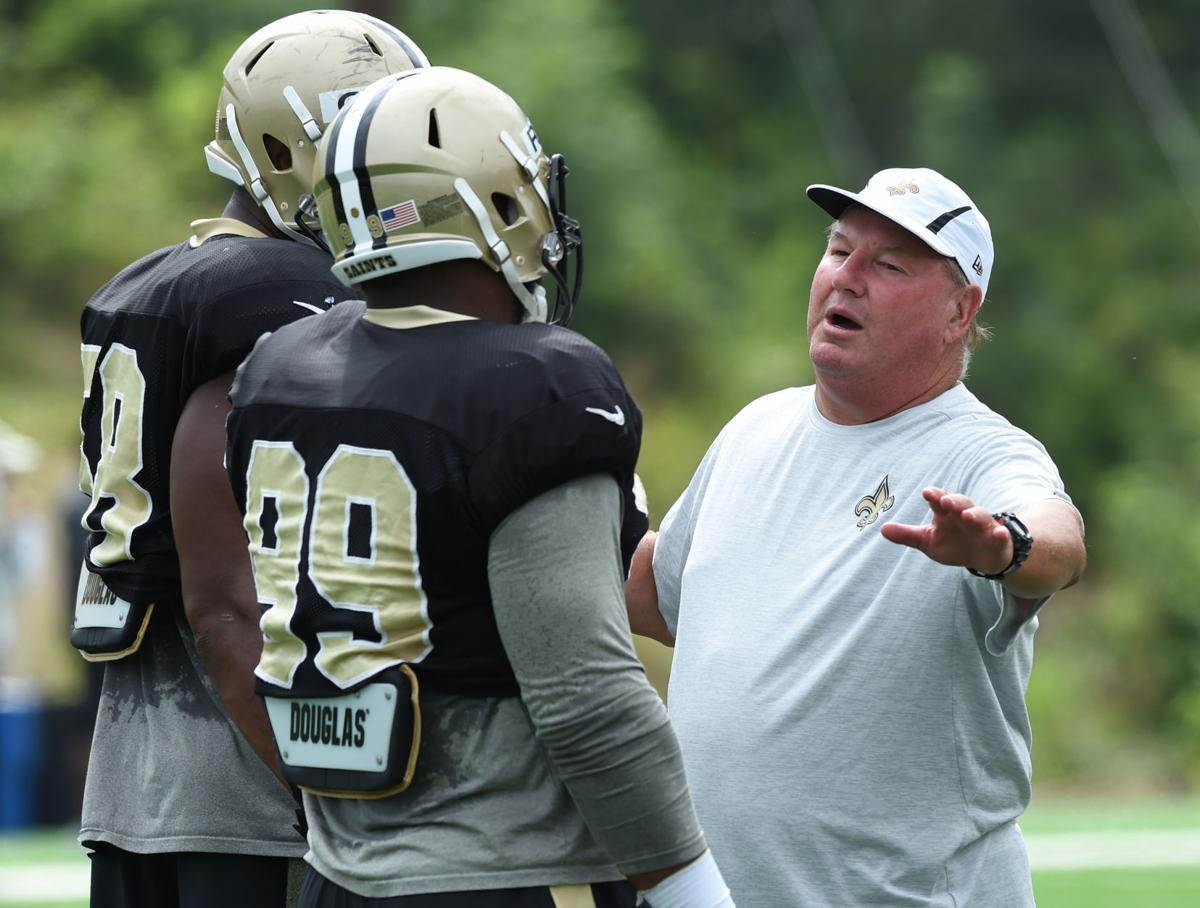 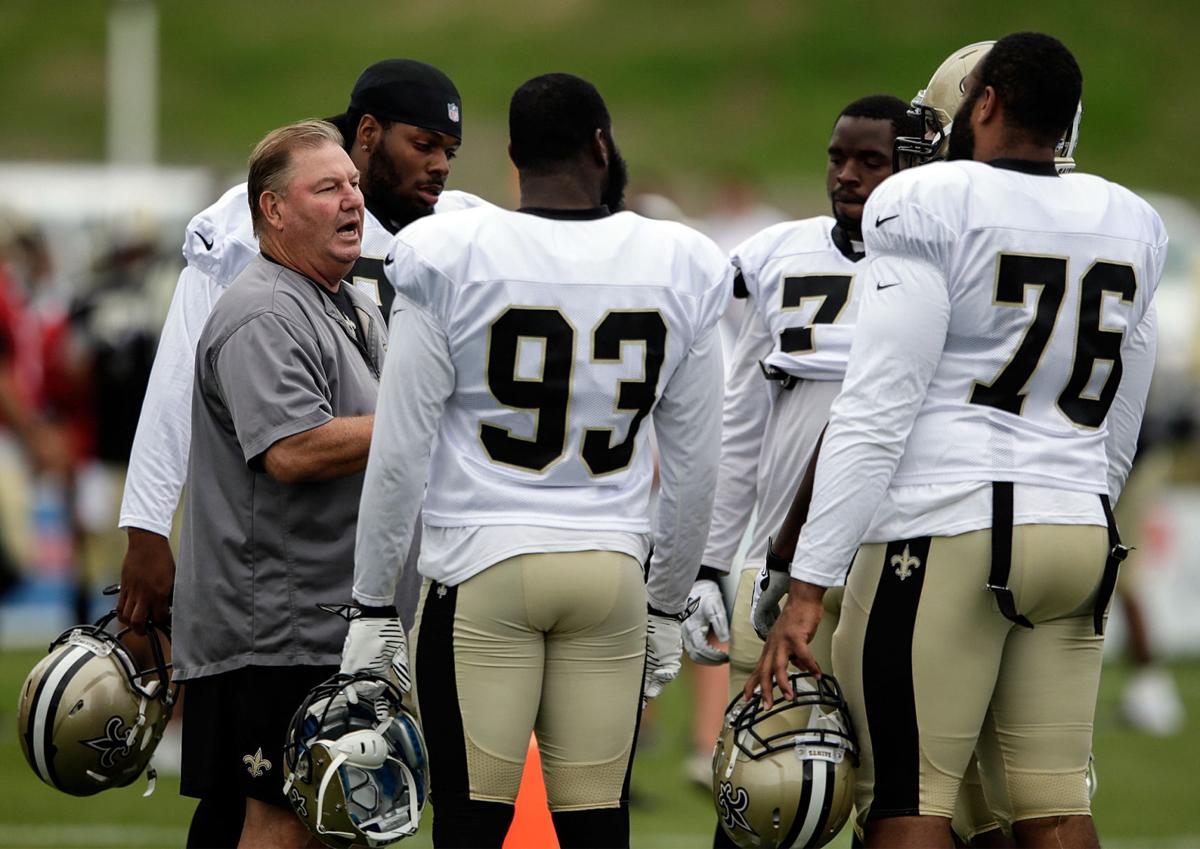 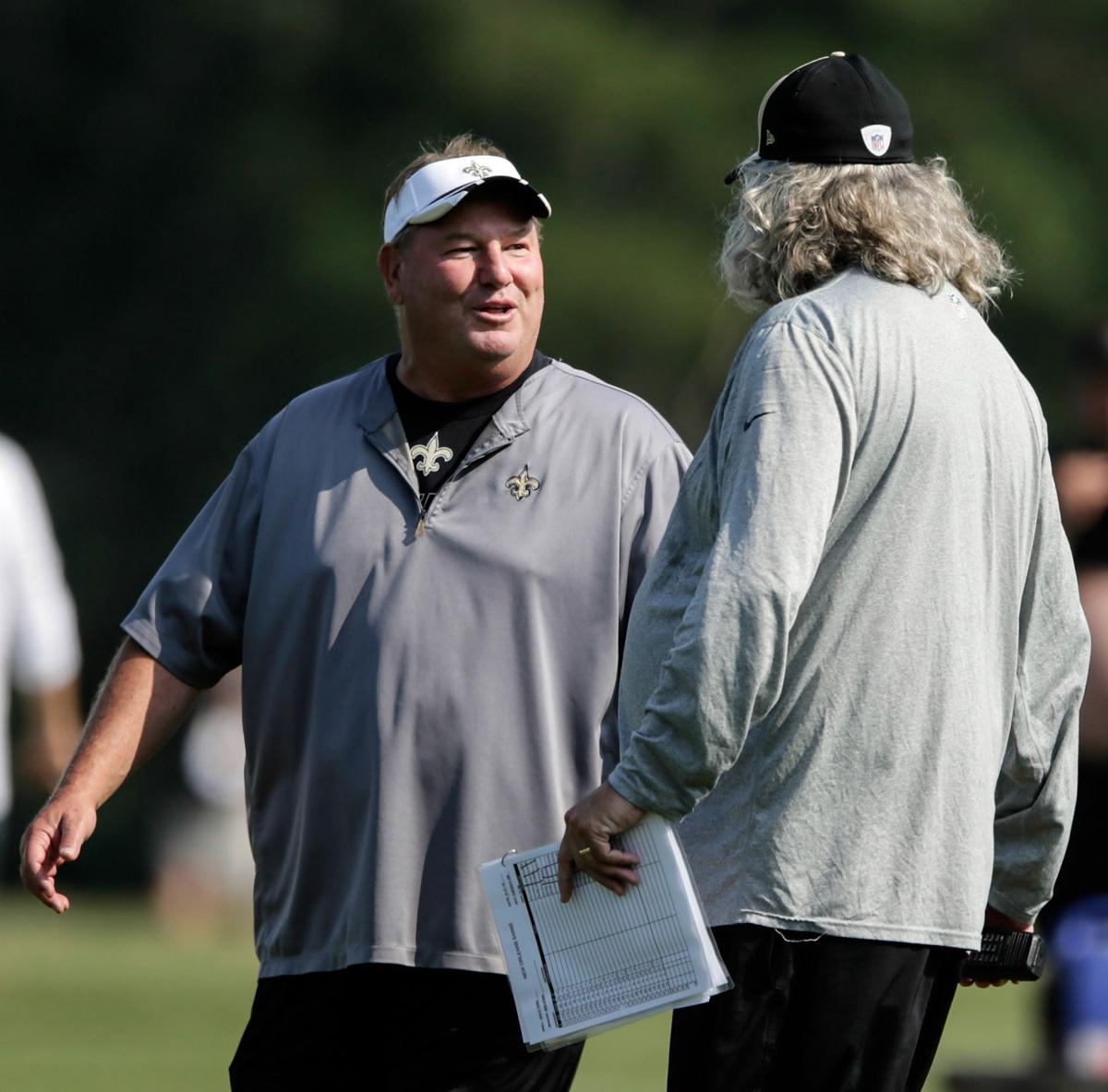 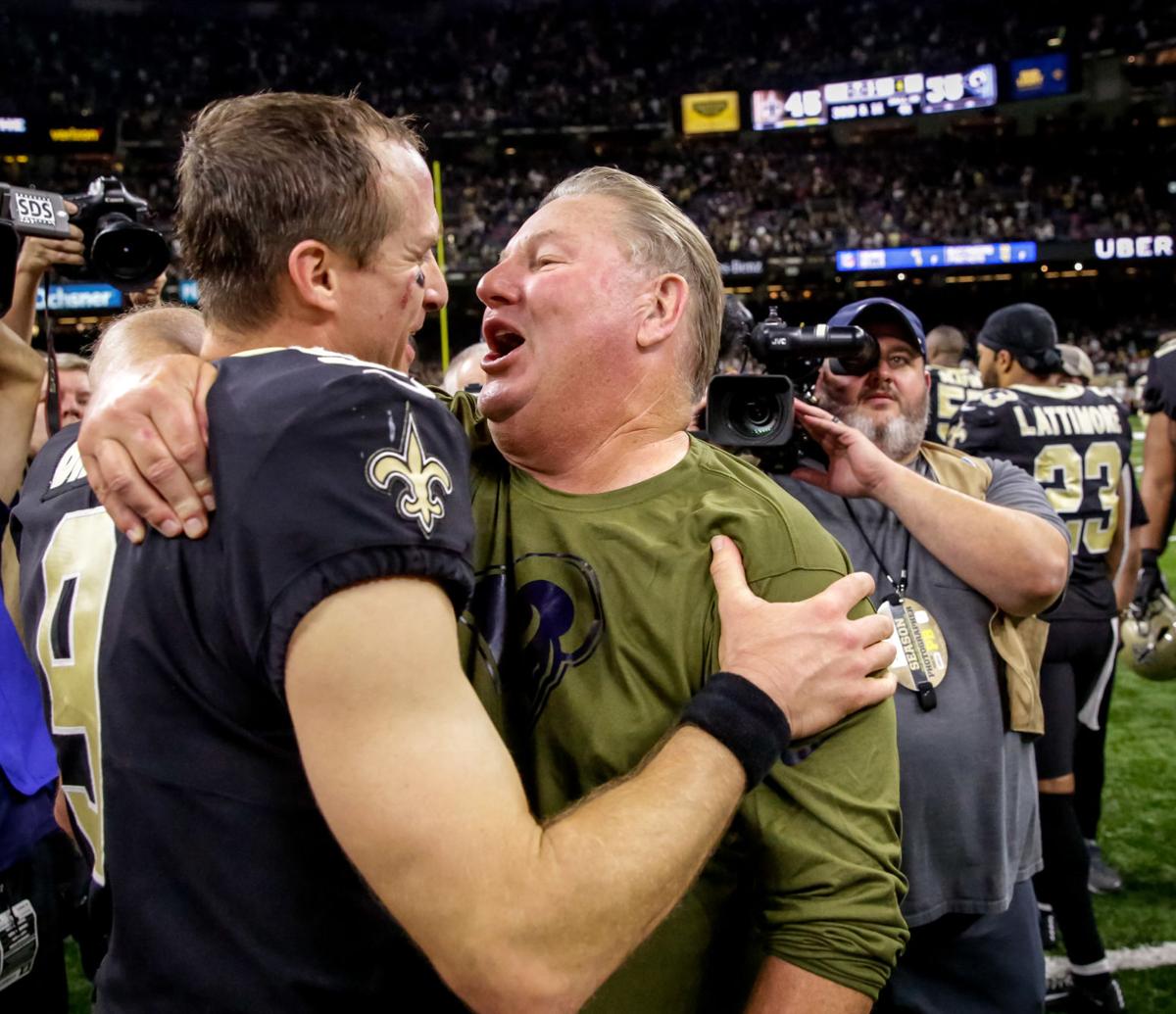 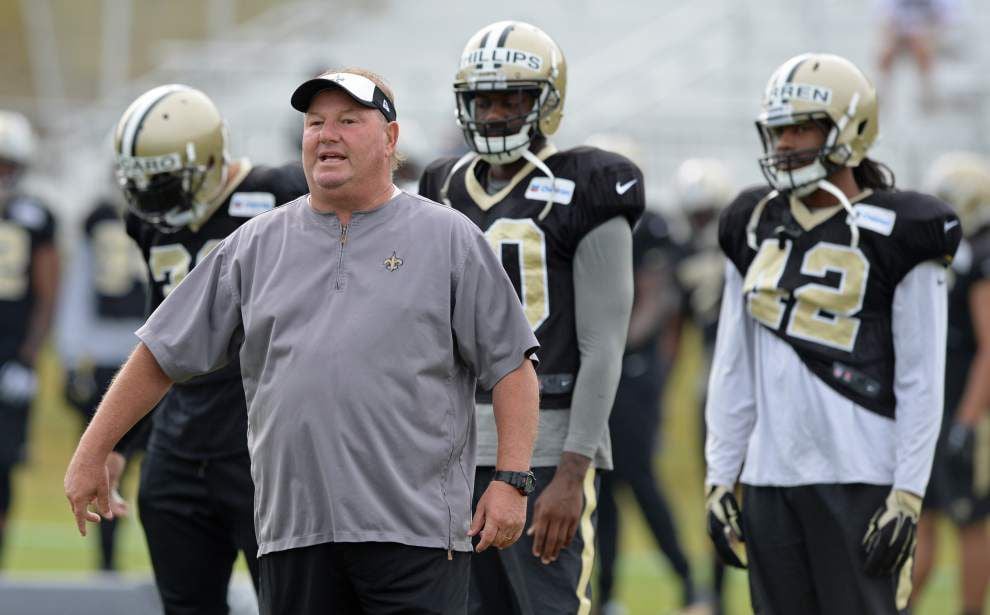 Timeout has been called at the Louisiana State Fair.

It's Oct. 22, 1983, in Shreveport's Independence Stadium. Northwestern State is leading 10-7 in the third quarter, and the Louisiana Tech offense has reached fourth-and-goal at the Demons' 1-yard line.

Bill Johnson, Northwestern State's defensive line coach, is on the sideline. His defense is on the field. Waiting. Johnson watches the Louisiana Tech offense run onto the field.

Suddenly, the Demons lineman known as "Bébé" stands up and points into the Bulldogs' backfield.

And, by gosh, Tech does run it at him.

"They sure did," former Demons head coach Sam Goodwin recalls. "Ran right to his side. He got some penetration and stopped it for no gain."

What better way to start the story of Orgeron and Johnson's bond than here in the trenches? Piled up in the sweat and the dirt of the State Fair?

Tech eventually wins 27-23 on this fall afternoon, but it is only the beginning.

Over the next three decades, these football lifers will collaborate their craft, earn respect coaching for the same college and NFL teams and forge a friendship over their shared passion for creating havoc in opposing backfields.

And when an emergency hire at LSU is needed before its 2019 season, Orgeron will know exactly whom to call.

Just how comfortable are these two coaches together? What can they do?

Joe Raymond Peace spoke with Johnson on the phone this week.

Peace, a former longtime coach at Northwestern State and Louisiana Tech, said his former player and assistant coach was very excited, "to say the least," that he was going to coach defensive line at LSU for the upcoming season.

Johnson's coaching opportunity rose from an unfortunate event: LSU defensive line coach Dennis Johnson tore both patellar tendons while playing basketball during the summer. Because he is restricted to a motorized wheelchair, he's unable to coach on the field.

At the start of preseason camp, Orgeron promoted analyst Kenechi Udeze, a former USC All-American defensive end, to fill in for Dennis Johnson; but by Thursday, Orgeron hired Bill Johnson to a one-year agreement as an analyst who can coach on the field with an approved waiver from the NCAA.

Before Johnson's arrival in Baton Rouge, he thought he'd have to take a year off from coaching.

Peace said he attended Johnson's son's wedding in June in St. Louis. This was only a few months after coach Sean McVay and the Los Angeles Rams fired Johnson.

In 2017, Johnson's first season in L.A., the Rams ranked in the league's top five in both rushing defense and scoring defense. Although the franchise's defense took a step back in 2018 (23rd in rushing defense, 12th in scoring defense), the Rams reached Super Bowl 53 and defensive tackle Aaron Donald was named NFL Defensive Player of the Year for the second straight season.

"You could tell (Johnson) wanted to get back in," said Peace, who started his 22-year coaching career in 1974.

Peace had been the one who persuaded Johnson to get into coaching in the first place.

Johnson was an undersized center at Northwestern State from 1975 to 1978, when Peace was the Demons' offensive line coach. Johnson's teammates called him "Smilin' Bill," for his happy demeanor and infectious giggle.

After his senior year, "Smilin' Bill" told Peace that his plan was to move back home to Monroe and work in the paper mill.

"What do you mean?" Johnson said.

"That's where you need to be," Peace said.

The Louisiana natives shared a passion for an aggressive defensive front, and like most football folks in the state, they bled purple and gold for the LSU Tigers. They'd often drive down to Baton Rouge to sit and talk football with former longtime LSU defensive line coach Pete Jenkins. They'd get on the blackboard, watch film and talk schemes and philosophies.

"They were two young guys that I knew would be outstanding coaches," Jenkins said. "They worked their tails off."

Johnson and Orgeron coached together again at McNeese State in 1985, on a staff that included current LSU offensive coordinator Steve Ensminger.

After that season, it was 34 years until Johnson and Orgeron would coach together again.

There was significant overlap.

Twenty years later, Bill followed Orgeron in the same manner, becoming the defensive line coach for the New Orleans Saints in 2009 when Orgeron departed the position to return to college coaching at Tennessee.

Johnson coached eight seasons in New Orleans and was famously right behind the dogpile, signaling Saints' ball, after Chris Reis recovered the gutsy onside kick to start the second half of Super Bowl 44.

But it was in Ruston where Johnson's career as a Division I defensive line coach began.

'He was not ready to retire'

Peace had been hired to lead Louisiana Tech into its first season at college football's highest level, and he said he'd always kept Johnson in mind for when he needed to assemble a staff.

Tech had been running a five-man, odd-front defense, and Peace said Johnson was adamant they switch to an attacking 4-3 scheme, which would "get speed to the ball."

Peace also knew that to compete with larger, more established programs, the Bulldogs weren't going to overpower people with a conventional two-back, pro-style offense. It had to be a one-back, spread offense, in which the Bulldogs could attack stronger defenses with speed and spacing.

"Bill said, 'I got the guy that you need to hire if that's what you want to do,'" Peace said. "It's Steve Ensminger."

Peace's staff laid out a five-year plan to make Louisiana Tech a successful Division I program. Former Bulldogs offensive line coach Petey Perot, who was Johnson's roommate at Northwestern State, described it as "the best time I ever had in my life."

"We were all young, and we all learned from each other," said Perot, 62, who played offensive guard for the Philadelphia Eagles from 1979 to 1984 and the Saints in 1985. "You kind of just put your arms around each other and said, 'Let's try and get this thing done.' "

Turns out, it only took three years: Louisiana Tech went 8-3-1 in 1990 and tied Maryland in the Independence Bowl.

Johnson had moved on to coach defensive line at Arkansas in 1990. In 1992, he took the same job at Texas A&M and helped build a dominant defense nicknamed the "Wrecking Crew" that helped the Aggies win three conference titles over the next eight seasons.

"Just about everyone he coached went to the NFL," former Aggies head coach R.C. Slocum said. "He was as good as a coach as I ever had work for me."

Johnson reconnected with Jasper when he became the defensive line coach for the Falcons in 2001, which began Johnson's 18-year run in the NFL.

That Orgeron would pick up a close friend when there's an opening is almost expected during his LSU tenure. It's something he's done throughout his career. When he was the interim head coach at Southern Cal in 2013, he called upon Jenkins to coach the defensive line in nine games.

Then, when Orgeron was named full-time coach at LSU for the 2016 season, he hired Jenkins again.

Even if Bill Johnson's return to coaching lasts only a year while Dennis Johnson recovers from his injuries, Jenkins said this opportunity "will be great for him."

"He was not ready to retire by any means," said Jenkins, who retired from LSU after the 2017 season. "This will keep him busy, keep him in the game. I'm sure he'll enjoy it."

Rabalais: A higher standard for targeting, but LSU players say it's still tough for defenders

When it came to football in Louisiana in 2018, the rules ruled. And not in a benevolent way.