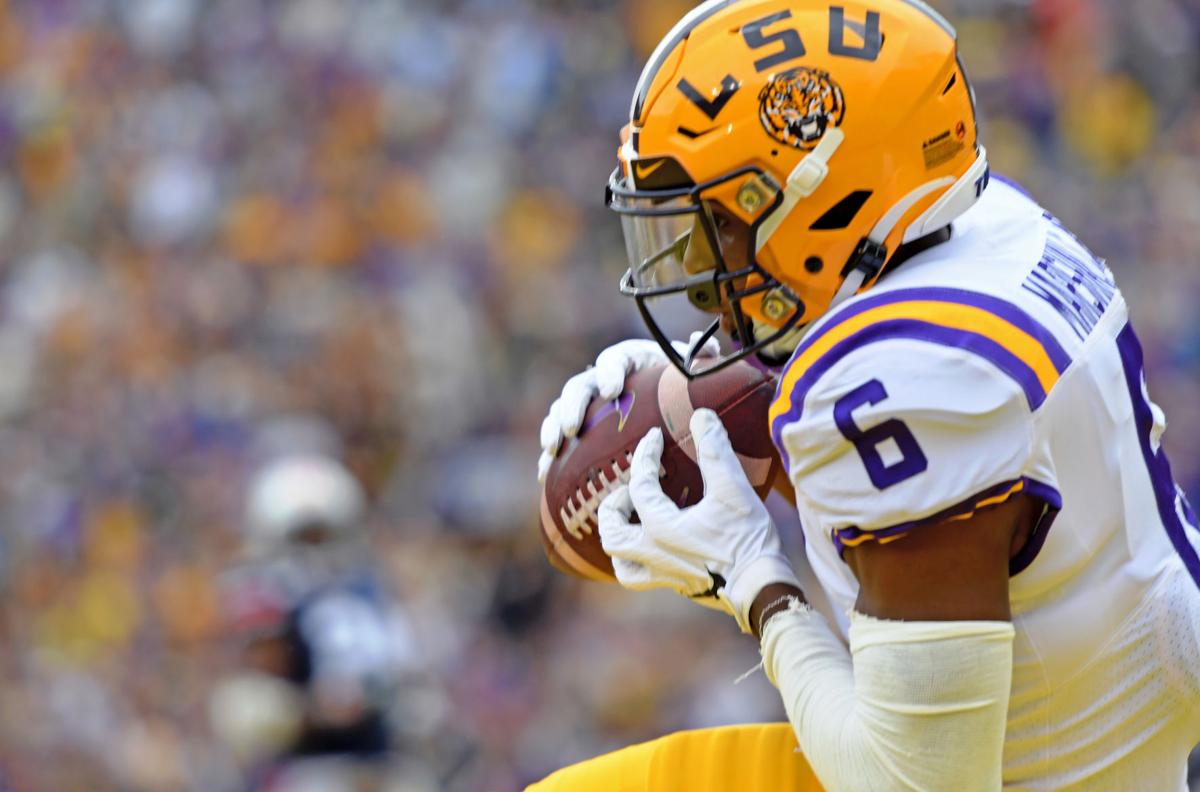 LSU wide receiver Terrace Marshall Jr. (6) pulls in a touchdown pass during the first half of LSU's football game against Auburn at Tiger Stadium Saturday Oct. 26, 2019, in Baton Rouge, La. 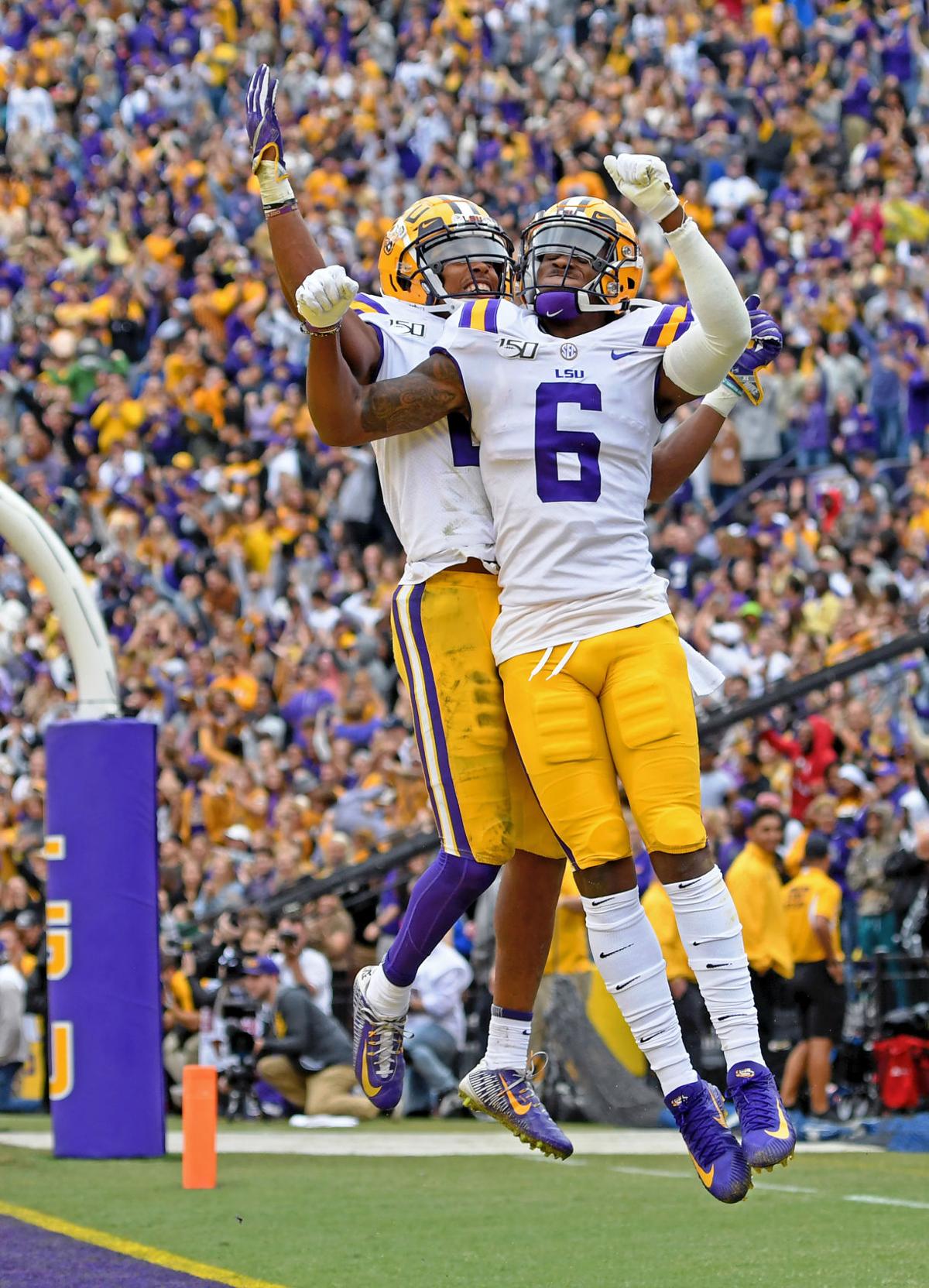 LSU wide receiver Terrace Marshall Jr. (6) pulls in a touchdown pass during the first half of LSU's football game against Auburn at Tiger Stadium Saturday Oct. 26, 2019, in Baton Rouge, La.

With a defensive back pulling his left arm, Terrace Marshall Jr. backpedaled into the corner of the end zone inside Tiger Stadium. He shook the defender as a pass spiraled toward them. Marshall had waited more than a month for this moment. He stumbled, caught the football and fell onto his back.

As a penalty flag landed on the grass for defensive pass interference, Marshall stood up. He celebrated his touchdown catch, LSU’s first during a 23-20 win over Auburn last weekend and his seventh this season. LSU declined the penalty. It didn’t need it.

Five weeks earlier, Marshall felt a pop in his right foot when he accelerated during a route. He underwent surgery for a reported fracture and began, once again, rehab for an injury. He watched LSU play without him. He felt frustrated, but he considered the experience a test from God.

“It looks like I passed the test,” Marshall said. “I'm back now.”

Rabalais: Joe Burrow's dad Jimmy is loving retirement ... it isn't hard to figure out why

When Jimmy Burrow decided to retire after three decades coaching football, he figured it would be worth it to watch his youngest son play foot…

When he arrived at LSU last year, Marshall was still recovering from a broken fibula and dislocated ankle suffered the second game of his senior year in Bossier City. Effects of the injuries spilled into his true freshman season, limiting his performance and speed.

After an offseason of training, Marshall, a former five-star recruit, emerged early this fall. He caught three touchdowns during the season opener, notched the first 100-yard game of his career and, one month into the season, led the nation in touchdown catches with six. Then came the injury against Vanderbilt. He walked off the field that afternoon using crutches, his foot in a medical boot.

Marshall spent LSU’s next three games on the sideline. He felt miserable, but he found motivation in the coaching staff and his teammates. They told him to keep his head up. Fellow sophomore wide receiver Ja’Marr Chase encouraged him to push his limits in practice.

Marshall eased back onto the field, and after warming up in full pads before LSU played Florida and Mississippi State, he returned when the Tigers played Auburn — two weeks before coach Ed Orgeron initially hoped.

“He's a fighter,” junior safety JaCoby Stevens said. “Anybody who had those injuries could have gave up and made excuses not to play or do the things he's doing now. He keeps fighting back and making plays.”

Marshall only caught two passes for 29 yards against Auburn, but his touchdown helped LSU’s offense break through an exotic defensive scheme that used seven players in coverage.

Early in the second quarter, after Chase positioned LSU with a reception at the 20-yard line, Marshall completed the drive. He expected the football in the red zone. The touchdown boosted morale. It showed up on video boards within the football operations building early this week.

“I was happy to see him out there getting his courage back,” Chase said, “showing that he's ready again.”

For Alabama, a mountain of injuries: No Tua at practice, and he's just 1 on a long list

TUSCALOOSA, Ala. — The doors to Alabama's indoor practice facility opened. Reporters filed in, peeking, searching for the quarterback who was …

Three days later, Orgeron said Marshall felt sore. Marshall estimated he was about 90-95% healthy last weekend, but he expects to reach full health before LSU tries to snap an eight-game losing streak to Alabama. His return gives LSU three elite wide receivers and an important target against the Crimson Tide, who have allowed 180.1 yards passing per game while intercepting 10 passes this season.

“Even when you do have him covered,” Stevens said, “he's still open.”

Injuries have plagued the beginning of Marshall’s collegiate career. They hampered his freshman season, and they interrupted his sophomore year. But Marshall said the recoveries have made him stronger, and as LSU continues its championship run, he wants to resume his emergence.

Can LSU's record-breaking offense finally outscore Alabama?; 'I want to believe it's the time'

TUSCALOOSA, Ala. — Peer through the gates of Bryant-Denny Stadium and there's a glimpse of where LSU last scored against Alabama.