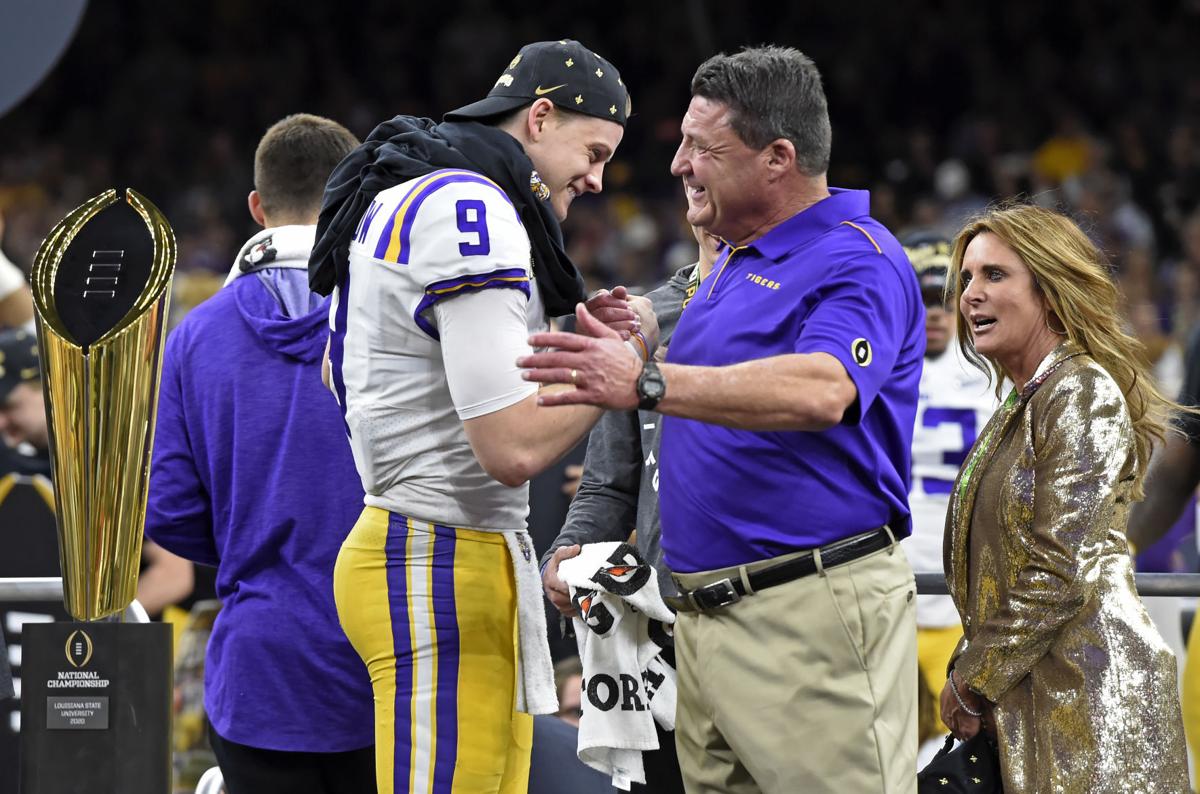 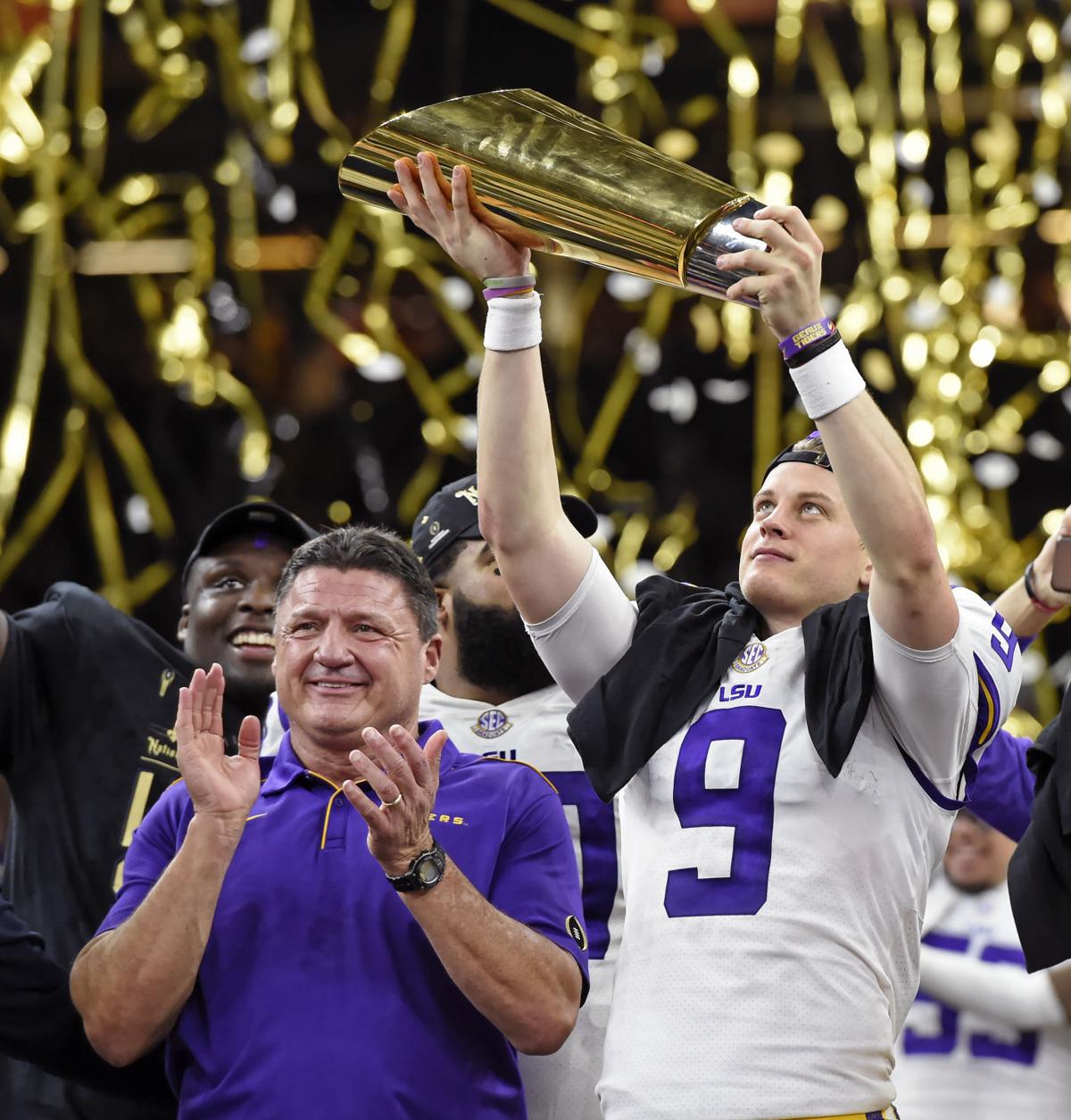 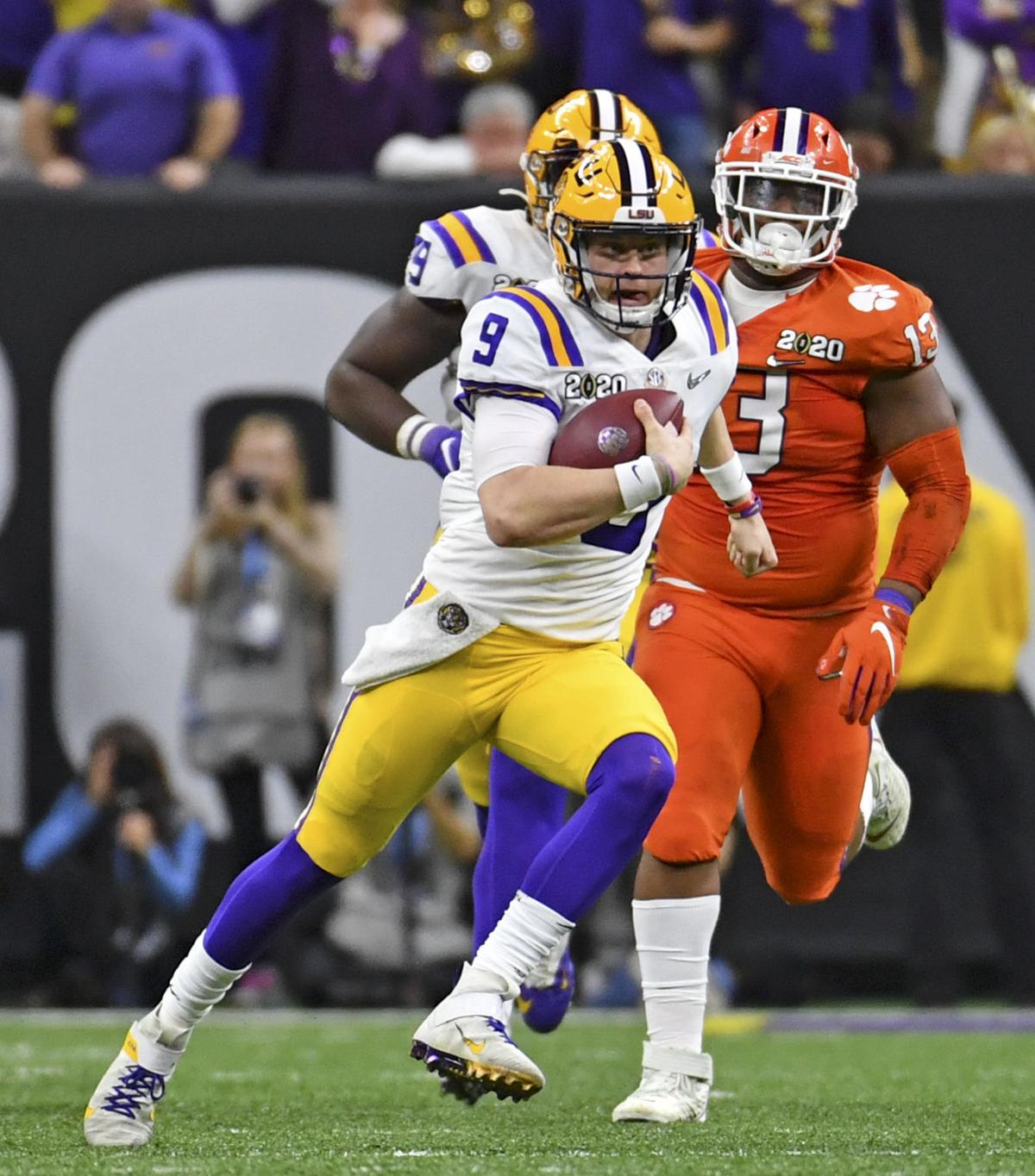 LSU quarterback Joe Burrow (9) runs the ball for a first down in the first half between LSU and Clemson in the National Championship, Monday, January 13, 2020, at the Mercedes-Benz Superdome in New Orleans, La.

LSU quarterback Joe Burrow (9) runs the ball for a first down in the first half between LSU and Clemson in the National Championship, Monday, January 13, 2020, at the Mercedes-Benz Superdome in New Orleans, La.

Cigar clippings were scattered on the locker-room floor, a haze of smoke flooded the air and LSU quarterback Joe Burrow emerged with a stogie between his fingers and a smirk across his face.

There was no more appropriate celebration for the nation's newest champions, the 42-25 victors over Clemson in the College Football Playoff National Championship Game, won Monday night in the Mercedes-Benz Superdome.

The perfect season ended in the perfect place. The only thing missing was the flare of a jazz trumpet, wailing a celebration that was surely spilling into the streets of New Orleans in that very moment.

It seemed almost inevitable that LSU's fourth national championship would be won here, where the sound of thousands of hometown voices boomed into the stadium's deepest chambers.

The celebration started on the field. Confetti fell from the rafters, spilling onto the shoulders of LSU coach Ed Orgeron, the Larose native, who led his home state team back to the pinnacle of college football.

"This is for everybody," Orgeron hollered from the stage, as fans in purple and gold roared their refrain.

Did you hear them in the fourth quarter? When Burrow, the Heisman Trophy winner, hurled a 24-yard touchdown pass to a leaping Terrace Marshall, when the final score of the night made LSU's lead cozier than a front porch on a spring afternoon?

"Callin' Baton Rouge" piped from the speakers. Most of the crowd screamed the infamous "Neck" chant over whatever the Golden Band from Tigerland happened to play. The Dome's video board showed Burrow waving his arm up and down to the chant, and the crowd howled approvingly for the Ohio State transfer who has become Louisiana's adopted son.

And it was a New Orleans native, Ja'Marr Chase, who broke the game open.

"To say I had all my goals written down on my mirror, I accomplished every goal I wrote down," Chase said. "I've got to come up with new goals now. This season has been ridiculous, man, that's all I can say."

There was a time when it didn't seem so inevitable.

No, Clemson seized control of the title match with early aggression.

LSU defensive coordinator Dave Aranda expected Clemson to counter blitzes with screens — they'd done so 80% of the time this season — and Travis Etienne took a screen 19 yards to the LSU 27.

LSU vs. Clemson game is good for 'spirit of country, Trump says after meeting with John Bel Edwards

While President Donald Trump didn't outwardly throw his support behind either LSU or Clemson, he commented that he thought the national champi…

Then LSU's defense tightened. On third-and-8, outside linebacker Michael Divinity returned for the first time since he departed the team for disciplinary reasons before the Nov. 9 Alabama game. He rushed off the left edge, clearing a space for safety Grant Delpit to sack Lawrence and force a punt.

And that's where LSU's offense began solving one of its toughest puzzles of the season.

Clemson's defensive front successfully brought pressure, and its defensive backs pressed LSU's receivers tightly, creating a strong box in which Burrow and the offense struggled to break out.

Starting at his own 33, Clemson's Lawrence completed a play-action pass 42 yards to a wide-open Braden Galloway — an explosive play moved back to the LSU 40 due to an illegal blindside block. The penalty only slowed Clemson from scoring four plays later on a 1-yard touchdown run by Lawrence to lead 7-0 with 6:34 left in the first quarter.

LSU had trouble getting pressure on Lawrence in key situations.

On second-and-14 at the Clemson 21 in the first quarter, Lawrence scrambled for 8 yards, making LSU linebacker Patrick Queen miss as he created a manageable third-down conversion. Later, he evaded outside linebacker K'Lavon Chaisson in the backfield to complete an 18-yard pass to the Clemson 47 — eventually setting up a 52-yard field goal.

Then, on the next drive, Clemson was backed up to its 4, and Lawrence had a clean pocket and completed a 24-yard pass to Ross. The explosive plays continued. Etienne rushed for 29 yards off the right edge, forcing LSU to hone in on the running back from Jennings. Etienne pitched a reverse to Tee Higgins, who barreled through two LSU defenders on a 36-yard touchdown run.

Clemson led 17-7 with 10:38 left in the first half. LSU had never trailed by two scores this season.

How did LSU finally solve the puzzle?

The Biletnikoff Award winner: Chase. He produced 133 of LSU's first 192 total yards. He separated himself from Clemson cornerback A.J. Terrell and caught a 52-yard touchdown that tied the score at 7 with 2:20 left in the first quarter.

Then, once LSU was down two scores, Chase fought past Terrell again for a 56-yard reception before he was tackled at the Clemson 3 — where LSU remained until third-and-goal.

And that's when the LSU offense — yes, this LSU offense in the year 2020 — went with an empty set. Burrow snapped the ball alone in the backfield, and it was he who ran in the 3-yard touchdown that pulled LSU to within 17-14.

Burrow's designed runs opened LSU's offense. On the following drive, he scrambled and slid for a 10-yard gain, beginning of LSU's most efficient drives of the night: Burrow hit Justin Jefferson for a 22-yard reception; Edwards-Helaire spun out of a tackle on a sideline pass for 23 yards; Jefferson lowered his shoulder into a safety for an 18-yard gain to the Clemson 14.

Then there was Chase again.

Burrow lofted a fade to the deep right corner of the end zone, and Chase hauled in the 14-yard touchdown reception that set LSU ahead for good, 21-17.

On third-and-10 at the Clemson 35, Burrow gashed Clemson again on the ground with a 29-yard run in the open field. Burrow pitched a 6-yard touchdown pass to Thaddeus Moss.

LSU led 28-17 at halftime, with Burrow once again a hero.

Joe Burrow and the record books: Check out a full list of stats, awards and more