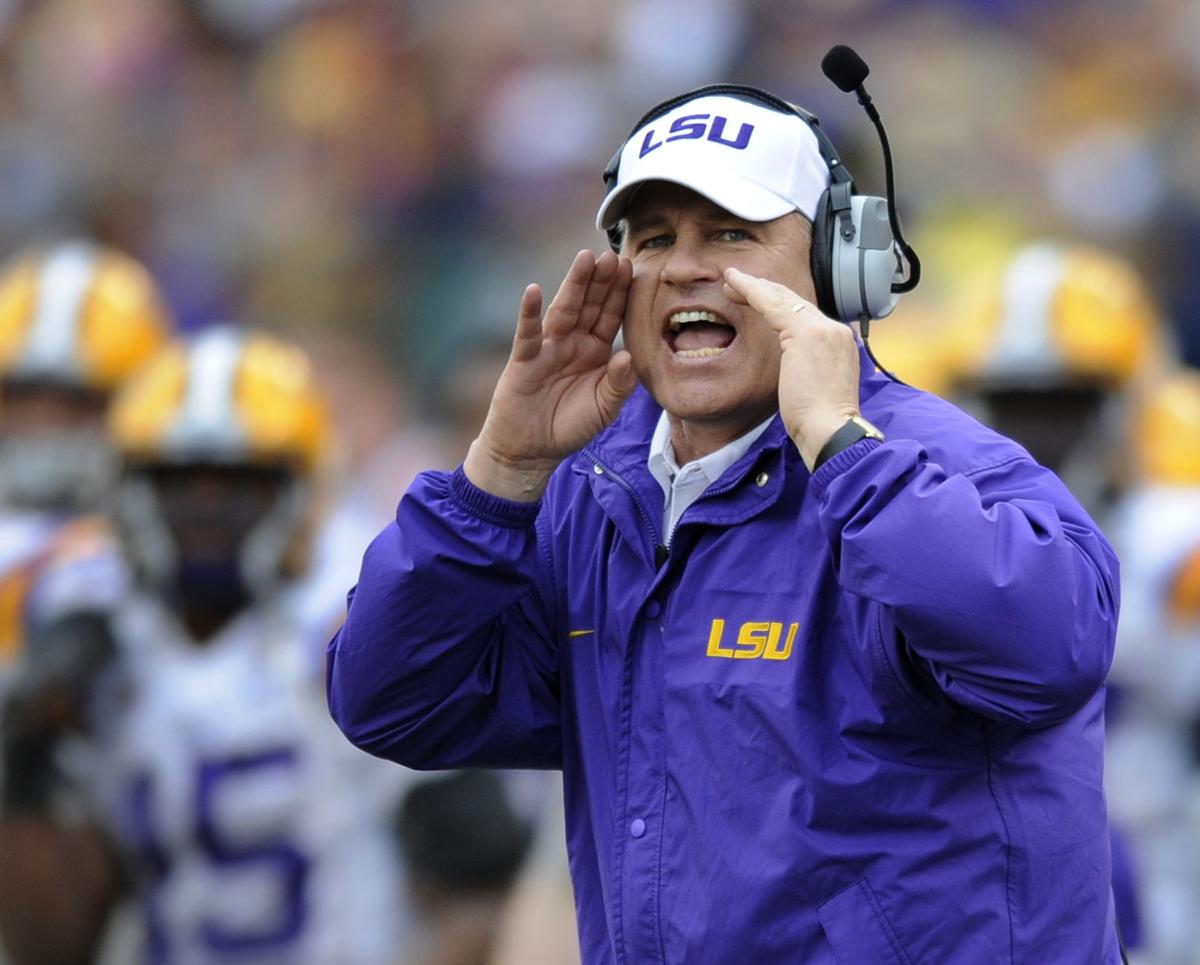 B402 LLC, which lists Miles wife, Kathy, as an agent, sold the unit in the Fieldhouse development in a deal that was filed Wednesday with the East Baton Rouge Clerk of Court’s office. The buyer was GTB Properties LLC of Baton Rouge. The Fieldhouse is located at 3347 Nicholson Drive, in the shadow of Tiger Stadium. 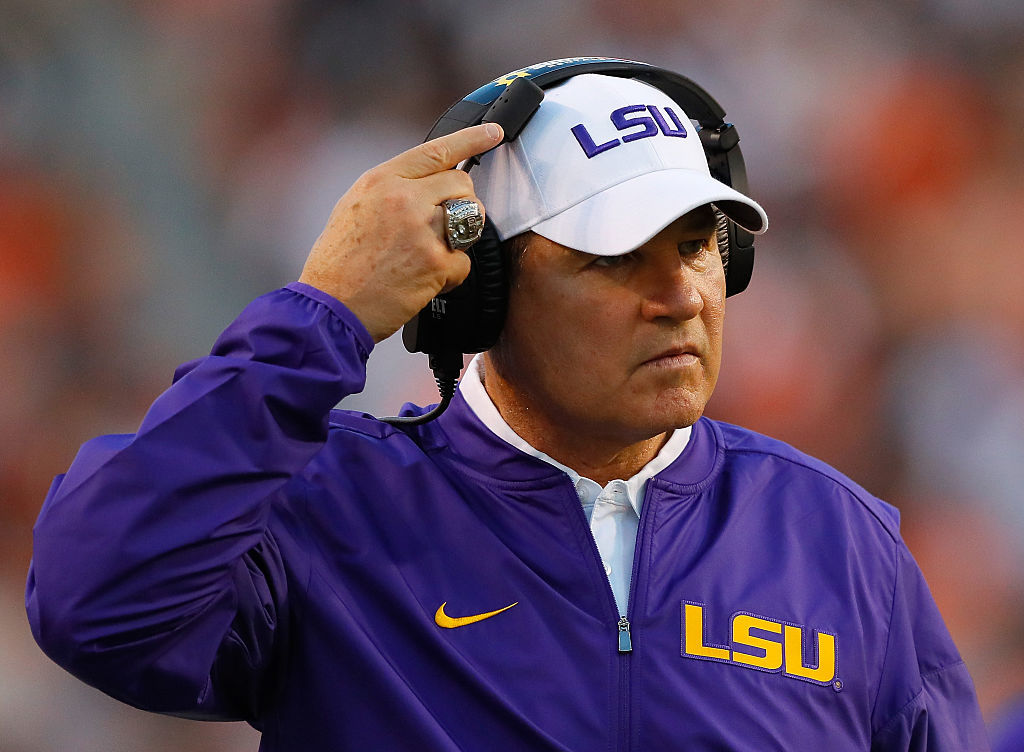 Head coach Les Miles of the LSU Tigers looks on during the game against the Auburn Tigers at Jordan-Hare Stadium on September 24, 2016 in Auburn, Alabama. (Photo by Kevin C. Cox/Getty Images)

B402 LLC, which lists Miles wife, Kathy, as an agent, sold the unit in the Fieldhouse development in a deal that was filed Wednesday with the East Baton Rouge Clerk of Court’s office. The buyer was GTB Properties LLC of Baton Rouge. The Fieldhouse is located at 3347 Nicholson Drive, in the shadow of Tiger Stadium.

Head coach Les Miles of the LSU Tigers looks on during the game against the Auburn Tigers at Jordan-Hare Stadium on September 24, 2016 in Auburn, Alabama. (Photo by Kevin C. Cox/Getty Images)

An attorney who represents the former LSU student who accused former head football coach Les Miles of sexual harassment warned Wednesday that any legal skirmishing over those accusations must respect the former student's privacy.

Attorneys for Associate Athletic Director Sharon Lewis called a news conference Wednesday to announce their plans to file a series of lawsuits against LSU, alleging that several Athletic Department officials retaliated against Lewis after she tried to report that students had complained to her about being sexually harassed by Miles. Lewis said in an interview Wednesday with The Advocate | The Times-Picayune that several young women were upset and traumatized when they told her of their encounters with Miles.

But while Lewis' allegations have fanned mounting outrage over LSU's handling of allegations of sexual misconduct, the lawyer for the student who accused Miles of harassment warned Wednesday about his client's rights to privacy amid the inquiries.

One after the other, all 10 LSU staffers, board members and lawyers who were asked to testify Thursday before the Senate Select Committee on W…

The young woman was a key complainant in a 2013 sexual harassment investigation that the law firm Taylor Porter conducted into Miles. Miles adamantly denied wrongdoing, and his attorney maintains that the allegations against him were baseless. Taylor Porter's investigation, which referred to the young woman as "student 2," said she told attorneys Miles had kissed her, suggested they go to a condo or hotel together and told her he was attracted to her.

Taylor Porter billing records and sources who knew of the investigation have confirmed that Miles entered a settlement over the sexual harassment allegations as well. LSU officials kept the Taylor Porter investigation out of the public eye until this year, when USA Today filed a lawsuit for a copy of it.

"Student 2 has asked us to indicate to all parties in no uncertain terms that the release of details of her outcry, even without her identifying information, is a revictimization and would be an invasion of her privacy," her attorney, Charles Peckham, wrote Wednesday to LSU's general counsel Winston DeCuir Jr.

Peckham, who is based in Texas, wrote that his client would consider it "a serious invasion of her privacy" if there were any public release in court filings or discovery of the young woman's name, birthday, location, dates of employment at LSU and dates of attendance at LSU.

"We must demand on behalf of Student 2 that this information be kept confidential and not disclosed publicly, and that it be sealed from public view in any and every potential forum," Peckham wrote.

The Advocate | The Times-Picayune does not name or identify victims of sexual harassment, sex crimes, domestic violence and similar encounters without their permission.

Lewis said in an interview Wednesday with this newspaper that she has experienced a hostile work environment at LSU for years, but that reading the full details of the Husch Blackwell report led to her decision to file lawsuits against the university. University officials hired Husch Blackwell to probe how LSU handled allegations of sexual misconduct over several years.

She said she's been taking leave from her job in the Athletic Department on a day-by-day basis.

Lewis said that she was interviewed by Taylor Porter as part of its 2013 Taylor Porter investigation into Miles. But she said she never saw the final outcome, and was instead told by the law firm that Miles' actions, while inappropriate, were not illegal.

Lewis' attorneys say they are seeking $50 million on her behalf through a federal Title IX lawsuit, a state whistleblower lawsuit, an Equal Employment Opportunity Commission grievance and a lawsuit alleging violations of the Racketeer Influence and Corrupt Organizations Act, better known as RICO.

"This lawsuit is a work of fiction eight years in the making," he said in a statement Wednesday. "The manner in which Ms. Lewis and her counsel have slowly rolled out this lawsuit is telling, culminating in her counsel holding a press conference rather than having the pleading speak for itself and pronouncing that the lawsuit is for 'other women,' implicitly acknowledging that the named plaintiff is a deeply flawed party without a valid claim. Les Miles has no liability in this matter, the accusations against him are false and meritless, and he will be responding by bringing his own claims addressing Ms. Lewis’ malicious and false accusations."

Furious with LSU’s sexual misconduct scandal, Louisiana lawmakers are heading into the upcoming legislative session with hopes of fixing some …