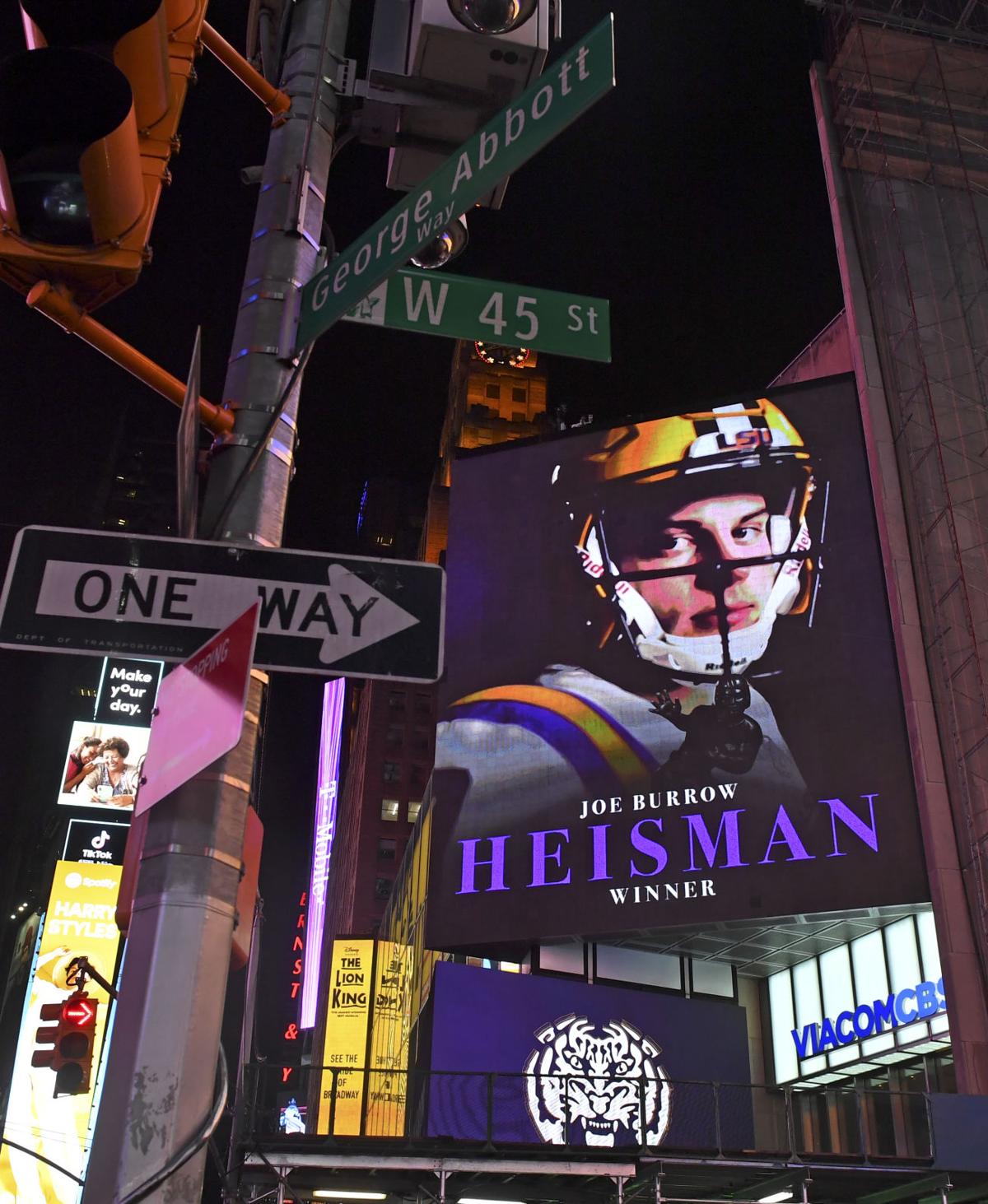 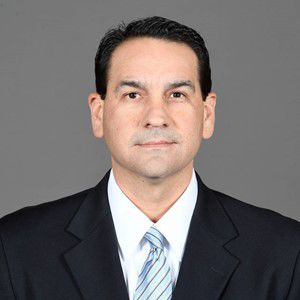 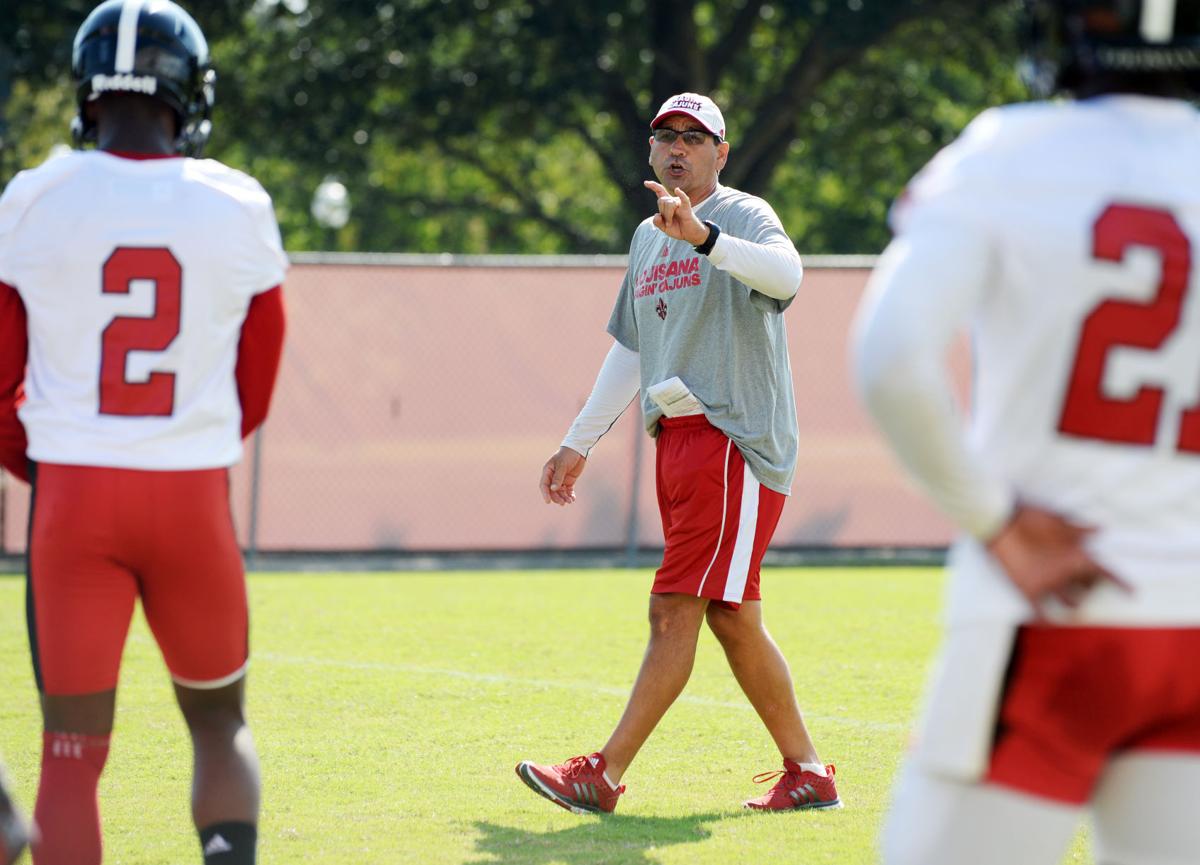 Before heading back across the room for a moment with Ohio State coach Ryan Day, then taking the podium, there was one more hug. One for a man a lot of people probably didn’t recognize, unless they were true scholars when it comes to college football in Louisiana: LSU offensive analyst and former UL wide receivers coach Jorge Munoz.

At the post-ceremony news conference, Burrow fussed at himself for forgetting to mention tailback Clyde Edwards-Helaire (no, he still hasn’t practiced here this week at the Peach Bowl), but Burrow made a point to thank his offensive coaches, including his offensive analyst.

“Coach Joe, coach Steve, coach Munoz are all here,” Burrow said. “You guys have helped me through so much, understanding the game, putting so much on my plate. I couldn’t ask for a better group of coaches to help me be successful.”

Joe Burrow on why he can't go out to dinner anymore; Q&A with LSU QB at Peach Bowl

ATLANTA — A Heisman Trophy comes with a variety of perks, but Joe Burrow shared one of the obvious negatives at Peach Bowl Media Day: He can't…

That Burrow invited an analyst, one of the largely unseen football support staff, to be with him in New York on one of the biggest nights of his life spoke volumes about the role a coach like Munoz and LSU’s other analysts have played in the program’s ascendence over the past two seasons.

In 2017, LSU had five off-the-field analysts — coaches who work the data but don’t actually coach a position — and the program was way behind. Orgeron convinced then-athletic director Joe Alleva to budget for 10 in 2018, helping LSU win 10 games and make its first New Year’s Six appearance in the Fiesta Bowl.

ATLANTA — Clyde Edwards-Helaire wasn't present alongside his LSU teammates to answer questions about his injury status ahead of the Peach Bowl.

That LSU’s record the past two seasons, a combined 23-3, has coincided with the expanded support staff is no accident, Orgeron said.

“These guys have made all the difference in the world,” Orgeron said Thursday during Peach Bowl media day at the College Football Hall of Fame.

“I think it’s a direct result in our success. We were so behind. Now we have the power, the knowledge, the advanced scouting, analysts breaking down everything we’re doing. We have answers for our players. Our coaches are able to get more information a lot quicker, put in the game plan a lot quicker.”

The analysts dig through tons of videotape on upcoming opponents, charting trends. Identifying tendencies. Their work frees up the position coaches to focus on game-planning. Think of the on-the-field coaches as people sitting at a terminal in mission control at NASA. Behind each of those seats is a support team feeding them information, the analysts.

“We’re not having the success we’ve had without them,” said passing game coordinator Joe Brady, the wunderkind addition to the staff who won this year’s Frank Broyles Award as the nation’s top assistant coach. “It makes our lives easier. You’re learning about stuff instead of having to figure it out.”

The work these analysts do veers headlong into minutiae territory. Munoz, who spent 10 seasons in a variety of positions at UL, including offensive coordinator, specializes in blitz protections.

“While we’re game-planning on Monday and Tuesday and setting up our first- and second-down game plan, Jorge is kind of setting up our blitz package on first and second down that we can send to Joe (Burrow),” Ensminger said. “On Tuesday, he’ll put together our third-down blitz package to present to Joe. The stuff he stays ahead of for me and Brady is outstanding.”

As the season went on and LSU remained at the top of the national offensive stats, teams tried again and again to change up their defensive schemes in an effort (often futile) to cross up the wires of the Tigers’ attack.

Munoz helps Burrow snip through those wires and remain prolific game after game.

“He’s meant so much to me,” Burrow said. “He helps me get those third-down blitzes picked up every week. So many teams have super-exotic packages, and he narrows it down to one, two, three things that my eyes have to look at so I can get these blitzes picked up. That’s a big reason why we’re one of the top third-down teams in the country.”

LSU, which ranks No. 1 nationally in total offense, ranks No. 6 in converting third downs at a 50.6 percent clip, just a step behind Oklahoma at 50.7.

“He’s the MVP in my room,” Ensminger said of Munoz.

Burrow said he expects Munoz to get a full-time coaching job again soon, so whether he is back in an analyst role after the College Football Playoff is an unknown.

But Munoz has already had an impact on LSU’s quarterbacking future. Nikki Johnson, mother of incoming freshman quarterback Max Johnson, recently named the coaches their family got to know during her son’s recruitment.

She mentioned Orgeron, of course, and Ensminger and Brady.

Ed Orgeron through the eyes of consultant John Robinson; 'Ed'll be in the Hall of Fame'

ATLANTA — John Robinson settles into a leather chair in a hotel lobby and jokes how little he's needed.