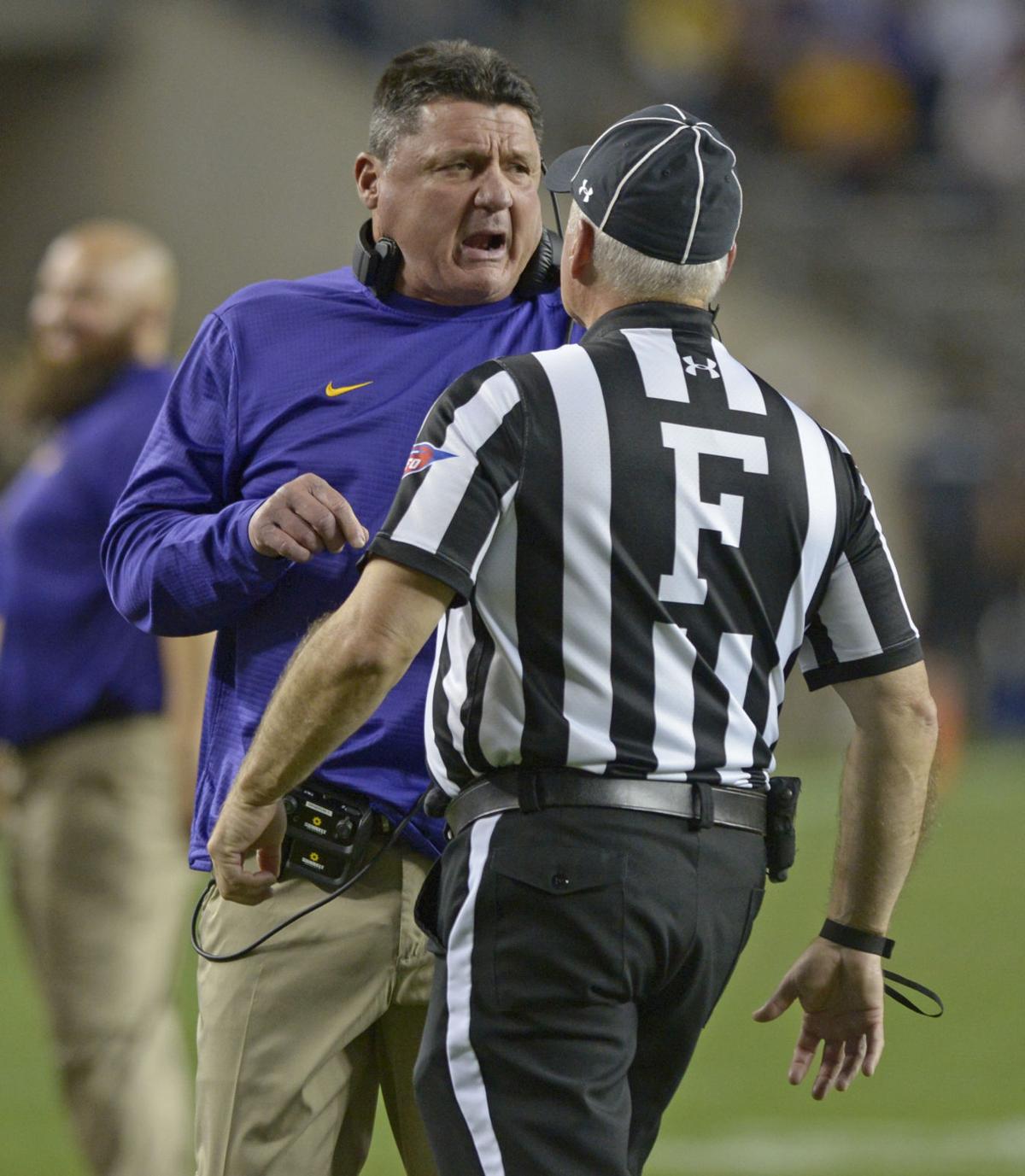 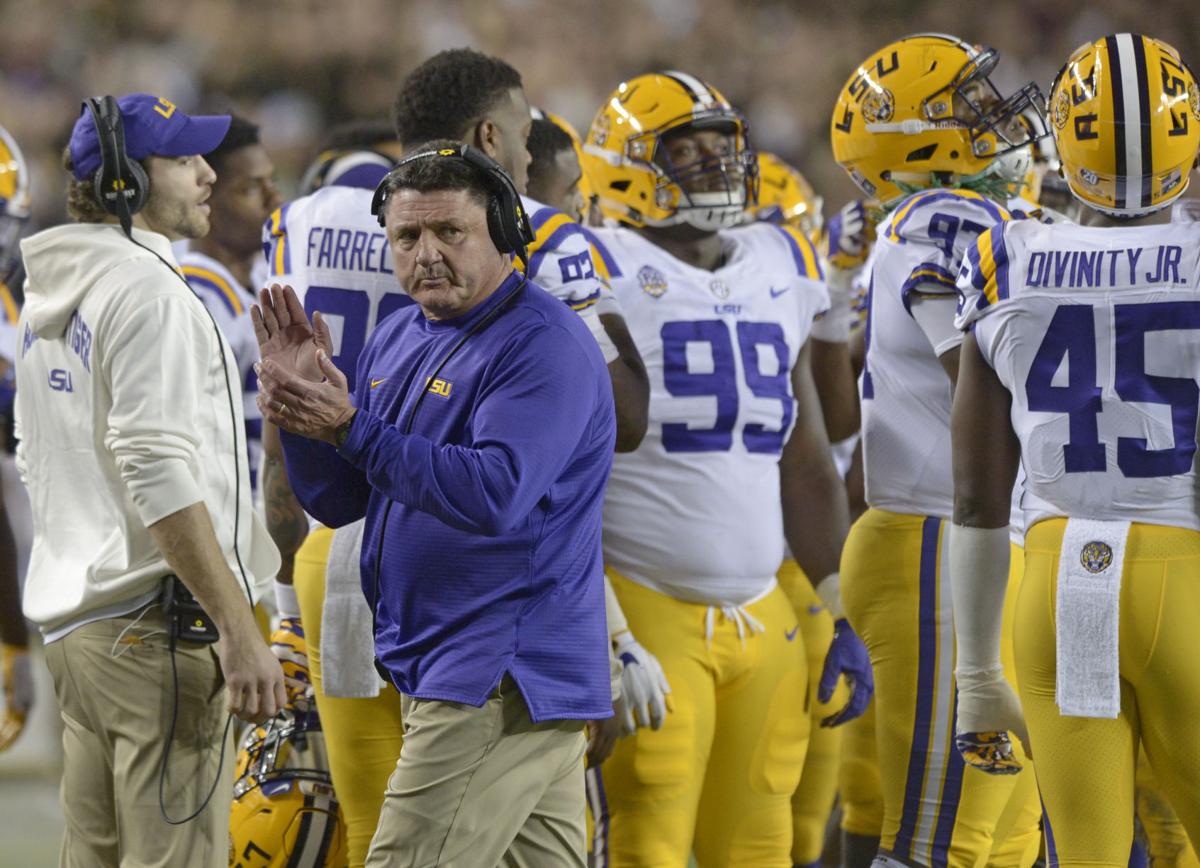 LSU head coach Ed Orgeron spoke publicly for the first time since the Tigers' epic seven-overtime, 74-72 loss to Texas A&M on Saturday in a Tuesday morning interview on "Off the Bench" on 104.5 ESPN.

At first, Orgeron stood by his comments from Saturday night, that one second should not have been put back on the clock when officials reviewed whether Texas A&M quarterback Kellen Mond had spiked the football with time left in regulation.

"In 35 years of coaching, I've never used officiating as an excuse," Orgeron said. "There was some bad calls. Four times the game should have been won for LSU. Those calls should have went in our favor and they didn't. There's nothing I can do about that. I felt bad about it. Our guys fought. We should have won the game."

Orgeron did say LSU could have avoided the calls if they had executed better as a team, including converting a first down on their final offensive drive of the game. Instead, LSU punted and gave Texas A&M a final drive to tie the game.

"We could have made a first down, the game was over," Orgeron said. "Better calls could have made. Better execution. Twenty-nine seconds left, they have no timeouts, we need to stop them."

Asked if the whole night at least sparked a rivalry between LSU and Texas A&M, Orgeron said: "I wish we played them tomorrow."

Statements from both LSU and Texas A&M contest what exactly happened during a postgame scuffle that followed the Tigers’ 74-72, seven-over…

Orgeron also commented on the controversy that followed the game, where there are conflicting accounts from both universities as to what happened after Texas A&M head coach Jimbo Fisher's nephew, Cole Fisher, shoved LSU analyst Steve Kragthorpe.

Kragthorpe had told the USA Today Network on Sunday that "out of nowhere" he "got nailed" and received medical attention from a Texas A&M team doctor.

Then, the Texas A&M University Police Department released a statement to the Houston Chronicle, which said Kragthorpe had retracted his statement that he had been struck and declined medical attention.

Then, LSU senior associate athletic director Robert Munson released a statement that said Kragthorpe had not retracted his statement and that he had gotten an EKG from EMTs in the LSU locker room. Munson said "Steve is a man of the highest degree of integrity and character."

"We're not getting into detail," Orgeron said Tuesday. "Coach Kragthorpe is a very good man. He has Parkinson's disease. He is very dedicated to our university. He has great character. What happened to him, it should not have happened. There was some very unprofessional acts done on that field. I hope the SEC does the right thing about it, and I'm sure they will."

The Southeastern Conference released a statement Monday that said Texas A&M had been fined $50,000 for its first offense of fans storming the field, which also said the league "remains in contact" with both LSU and Texas A&M regarding the altercation.

Texas A&M has been fined $50,000 for its fans storming Kyle Field after the Aggies beat LSU 74-72 in seven overtimes Saturday night, the S…

Orgeron said he thought offensive coordinator "Steve Ensminger called one of his best games," which included a game plan to not be as restrictive using Burrow as a runner as the coaching staff had been throughout the season.

Other than Burrow, backup Myles Brennan is the only scholarship quarterback on the roster, and Orgeron said Brennan was dealing with a minor injury during the middle of the season that restricted his ability to throw.

Rabalais: If you wondered whether LSU's Ed Orgeron was still steaming over the Texas A&M game, he is

Ed Orgeron is still mad as hell about how his LSU Tigers lost Saturday at Texas A&M in seven overtimes, and he does not give a Christmas f…

"We wanted to run him more during the season," Orgeron said. "We were really going through the season with one quarterback. So we couldn't take the chance... We went into the last game saying we were going to run him."

The game had several twists and turns, including a muffed punt by LSU returner Jonathan Giles that was recovered by Texas A&M early in the third quarter. Momentum shifted back toward the Aggies' way, and they scored a touchdown to take a 24-17 lead with 3:43 left in the third quarter.

Orgeron said "we need to get better in that area" of punt returning, and said that starting nickel safety Kary Vincent could return punts.

"Kary Vincent has come to me," Orgeron said. "And he can do it."

It was initially ruled an incomplete pass by the officials, and to several viewers it appeared that it could also have been a fumble.

"I was going to call a timeout and challenge it," Orgeron said. "But it was ruled an incomplete pass. You can't challenge an incomplete pass. But, they were reviewing it. They were looking at it, seeing if there would be conclusive evidence. And I could have called a timeout, but the referee told me, 'Coach, you can call a timeout, (but) you're wasting it. There's not conclusive evidence. We looked at it. We reviewed it. You'd be wasting a timeout. But if you want to call one, you can. So I didn't call a timeout."

Orgeron said he talked to the head of SEC officials, Steve Shaw, Sunday morning, who told Orgeron the officiating crew was correct in their procedure. But if it had been initially ruled a fumble, it could have been reviewed.

Rabalais: Saturday's epic game may have been the birth of a new and deeper LSU-Texas A&M rivalry

As the scores piled high to the heavens Saturday night between LSU and Texas A&M, something was in the process of being born that LSU has …

"It was the wrong call," Orgeron said. "They made a mistake."

Orgeron called in from the recruiting trail, and Monday afternoon he tweeted his recruiting catch phrase "Hold That Tiger!" which indirectly means a new recruit had committed to LSU.

No specific announcement from that recruit has yet been made.

Asked about recruiting, Orgeron said it's "been fantastic."

"The guys saw the game," he added. "Everybody was pulling for the Tigers. Everybody saw what happened, felt that we should have won the game."

Ed Orgeron transcript from appearance on 'Off the Bench' on 104.5 FM

This is a transcript of LSU football coach Ed Orgeron’s appearance on the “Off the Bench” show Tuesday morning on WNXX-FM 104.5 with Jordy Cul…