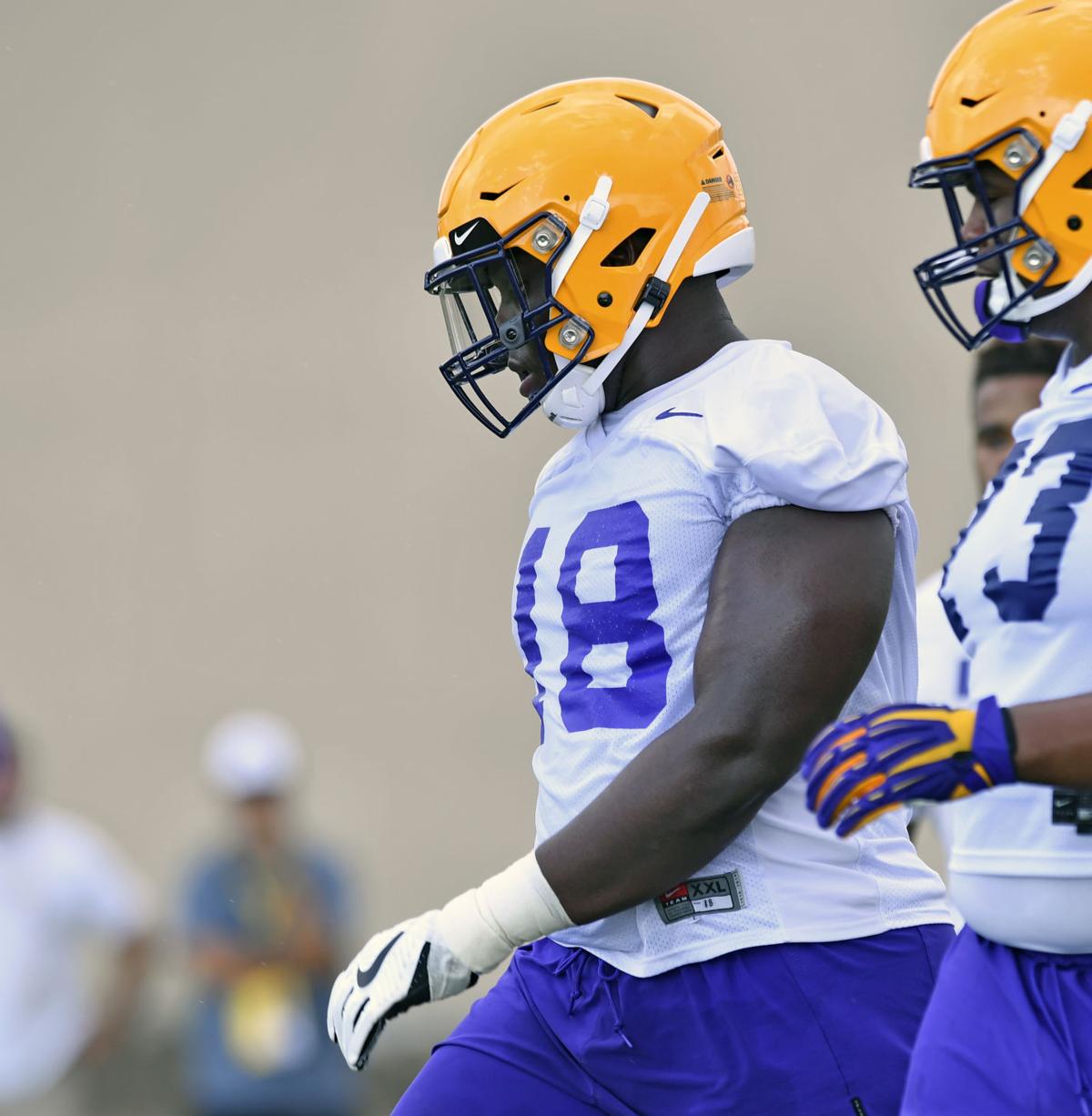 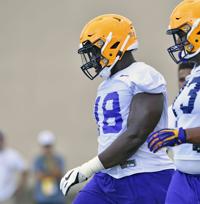 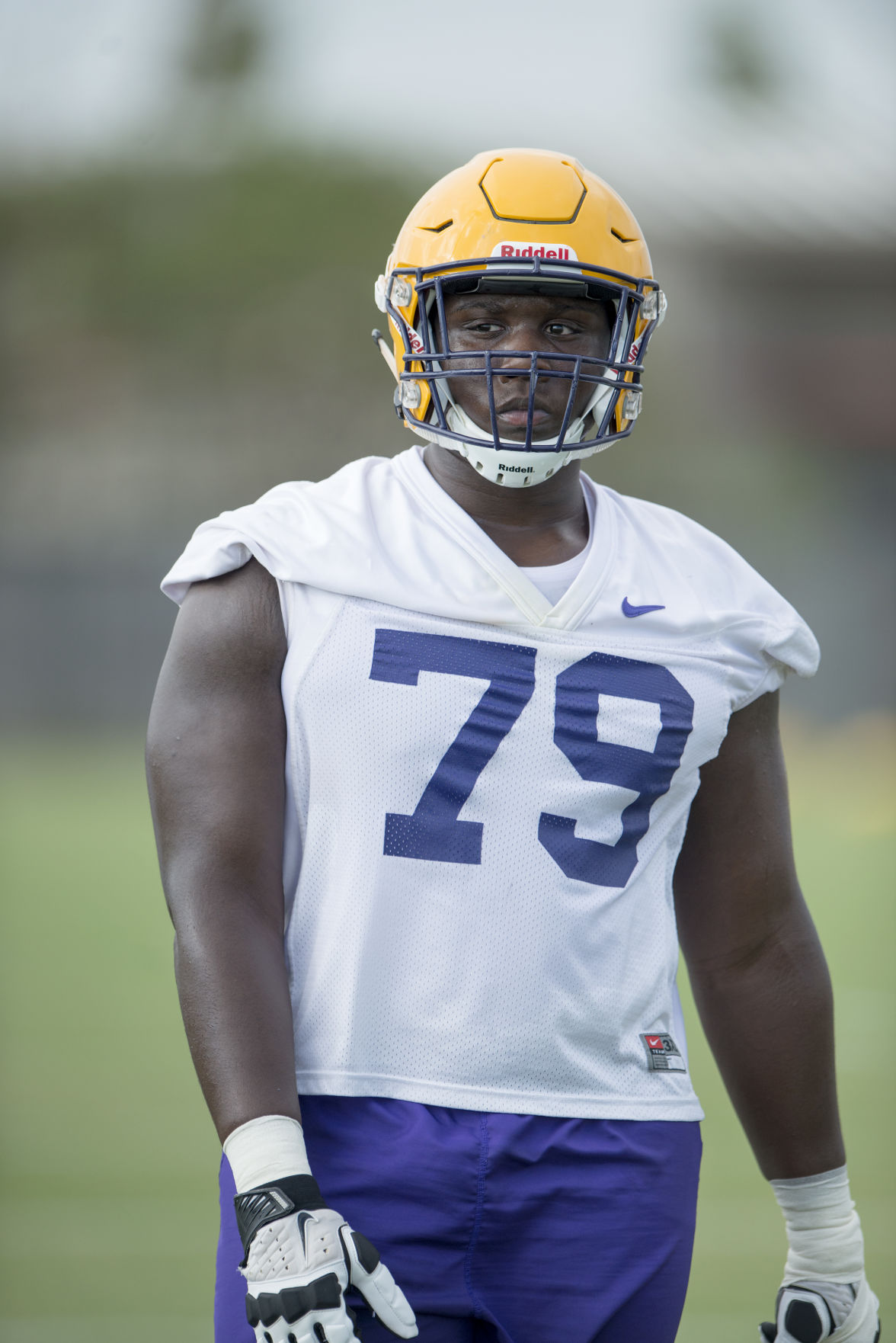 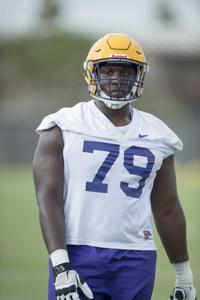 LSU offensive linemen Lloyd Cushenberry (79) waits for the start of the drill during practice Monday, August 21, 2017. (Photo by Haskell Whittington, NOLA.com | The Times-Picayune)

LSU offensive linemen Lloyd Cushenberry (79) waits for the start of the drill during practice Monday, August 21, 2017. (Photo by Haskell Whittington, NOLA.com | The Times-Picayune)

Two players would be wearing the team's honorary No. 18 in the 2019 season, the Tigers head coach explained in a team meeting Thursday night. One was outside linebacker K'Lavon Chaisson. The other, Orgeron hinted, would be the first LSU offensive lineman to ever receive the number.

Cushenberry was in shock when he heard his name.

"It took me a while to stand up," he recalled Saturday. "I didn't know what to say."

Those who know Cushenberry best would not be surprised by his speechless response.

LSU's returning starting center has always been known as a quiet man, an introverted player who speaks only when he needs to.

Little league football coaches remembered how they'd coached Cushenberry for two years and had only heard his voice once.

His coaches at Dutchtown High had to pull words out of their young lineman on a recruiting road trip.

Even at LSU, players aren't used to hearing their center's voice boom inside the expansive rooms inside the program's new football operations building.

But when Cushenberry speaks?

"I think that's the best kind of leadership," LSU quarterback Joe Burrow said. "You have some leaders that always have something to say, and then people start to tune them out. So when they actually have something to say that matters, nobody will listen to them. I think Lloyd is the epitome of that kind of leadership: He doesn't say a lot, but when he does, you're going to listen to him."

Chaisson said Cushenberry is someone "you would have your child idol after."

"He does the right thing on and off the field," Chaisson said. "Stopping at red lights. Stopping at stop signs. Complete stops, which, who does that?"

And even though he's a quiet guy, Cushenberry has plenty stories to tell.

He was an undervalued lineman who committed to Mississippi State until LSU called with a scholarship offer the day before national signing day.

He was a true freshman, staring up at a depth chart at center filled with future NFL players Ethan Pocic and Will Clapp, wondering when he'd get his turn to play.

Even going into the 2018 preseason, after the departure of Pocic and Clapp, Orgeron had his reservations about starting Cushenberry — because of his size and whether he'd be able to handle a nose tackle one-on-one. At the time, Orgeron said that Cushenberry would be rotating at the position with former lineman Garrett Brumfield.

Cushenberry became one of LSU's best and most consistent linemen in 2018, a year in which the position group struggled while being hampered by injuries and the indefinite suspension of right guard Ed Ingram.

"He ended up being one of the best centers, I think, that's going to be in the SEC," Orgeron said Friday. "He's going to be a draft pick. He's got a chance to play in the NFL, and we're very pleased with him."

After Ed Orgeron's analysts poured over game tape and data from the 2018 season, they returned to LSU's head coach with a statistic.

Debbie Cushenberry remembers her youngest son always had a football in his hand.

She and her husband, Lloyd Jr., bought the ball for their son when he was a small child, and he threw it to himself everywhere. Debbie said she once found him asleep in his bed, cradling the football in his arms.

That was evidence enough for her to ask a local youth football coach how old somebody had to be to play in the community's little league.

Vince Roddy, who still coaches the St. Amant Wildcats, told her the age requirement was six.

Cushenberry was then 8, the youngest behind his sister, Ayanna, and brother, Terrance.

"I went home and asked Lloyd if he wanted to play football," Debbie said. "He was so happy. He had that football in his hand. He went to his older brother. 'Momma's gonna put me on the football team!'"

LSU held its second football practice of preseason camp on Saturday afternoon. There were our observations.

From then until college, Cushenberry would never touch the football again during a game.

He wore No. 35 as a defensive lineman for the Wildcats, and as he went into middle school, he flipped to the offensive line.

Roddy said Cushenberry caught on quickly because he listened and rarely spoke — he'd just smile wide, then run onto the field to tackle someone or knock a defender back on the offensive line.

Cushenberry got his offensive possessions in basketball, following in the footsteps of his brother, who played for the Dutchtown High basketball team.

Former Dutchtown football coach Benny Saia remembers he was running the ticket register at a Griffins basketball game when he saw Cushenberry walk in to watch Terrance play.

"You could just tell from his size," said Saia, who now coaches at Acension Catholic. "For sixth grade? I said, 'You're going to play football for me.'"

Double take: Lloyd Cushenberry, K'Lavon Chaisson to carry on No. 18 tradition for LSU

When members of the LSU football team run onto the field for their first practice of preseason camp Friday, the Tigers will have a new No. 18 …

Dutchtown has been a powerhouse in producing talent.

"When Lloyd was a sophomore, it was 'That's the next big one to come out of Dutchtown right here,'" said John Talley, Dutchtown's defensive line coach while Cushenberry was there. "He had the feet. He had the want to. When he made a mistake, he wanted to get it right."

Cushenberry grew stronger after suffering a broken ankle during his freshman season, an injury Saia said probably kept him from pursuing basketball full-time.

The Griffins ran a spread offense, and Saia placed Cushenberry at left tackle on varsity as a sophomore to protect the quarterback's blind side.

As the games went by, the Dutchtown coaching staff began to understand Cushenberry for the quiet man he is.

"The way you motivate Lloyd is to give him a schedule," said Talley, now an assistant at St. Charles Catholic. "You don't have to pump him up. I think he's motivated plenty by the way he works."

The quintessential Cushenberry story occurred during his junior season. The Griffins, used to deep playoff runs, were slumping in the middle of what would be a 5-7 season.

During a team drill in practice, players started to drag and wander.

Cushenberry barked at his teammates. They stopped and turned.

So did the coaches: Is that Lloyd?

"He shut down practice," Talley said. "It was a joke in the coach's office."

"They were so surprised to hear him talk and tell them we were screwing up," Saia said. "They listened. It meant something because he wasn't one of those guys that ran his mouth every day."

A call from home

Cushenberry, who was 6-foot-3 during his senior year and remains the same height today, was thought by coaches to be too short to play tackle for a major college program.

Most schools, Saia said, are looking for players who are hovering around 6-foot-7, like LSU starting right tackle Austin Deculus. So the Dutchtown coaching staff started working Cushenberry into some reps at center during practice, although he never played the position in a game.

Perhaps it was his size, Saia thinks, that kept Cushenberry from being heavily recruited. Or maybe it was more so that Cushenberry didn't put an emphasis on going to the high-profile summer recruiting camps, where recruits are poured over by recruiting reporters and college coaches.

But by the summer before Cushenberry's senior year, Louisiana Tech was one of his only few scholarship offers.

Talley was about travel to South Carolina's campus, where he was going to get scheme advice from Joe Robinson, the Gamecocks' former special teams coach. South Carolina had a scheduled recruiting camp at the same time, and Talley decided to take Cushenberry along.

Talley and another Dutchtown assistant spent the 11-hour drive to Columbia, South Carolina, "trying to pull words out of" Cushenberry to no avail.

LSU received a commitment from its possible punter of the future.

Spurrier retired six games into the 2015 season, a year in which the Gamecocks finished 3-9, and Cushenberry silently committed to Mississippi State, because it was closer to his family.

All the way up until the day before signing day, Cushenberry had told former Mississippi State coach Dan Mullen he was signing with the Bulldogs.

But then LSU called and told him a scholarship spot had opened up.

After counsel and prayer with his family, a quiet Cushenberry knew he'd have to have an uncomfortable conversation: he had to call Mullen in the morning and tell him he was signing with LSU.

"That night before, I didn't sleep at all," Cushenberry said. "I feel like that really helped me become more of a man, growing up, that I had to make that call."

In late July, Roddy and his assistant coaches were digging through a pile of St. Amant Wildcats equipment, preparing for the upcoming season.

One coach held up a No. 35 jersey, handed it to Roddy and said, "that was Lloyd's number right?"

Roddy laughed, remembering that Cushenberry had never been able to fit in it.

Then the idea came: What if we invited him back and gave it to him?

LSU punter Josh Growden has entered the NCAA transfer portal, a source confirmed with The Advocate, which leaves the team with one veteran pun…

And so, right before LSU's preseason camp began, Cushenberry returned to his first football team and received his old No. 35 jersey.

He lingered and spoke to the program's nearly 100 kids, and he left with the No. 35 jersey in hand — not knowing it would be the first of two honorary jerseys he'd receive.

Now, as one of LSU's No. 18s, Cushenberry is tasked with being the leader of an offensive line that ranked 106th nationally in 2018 with 35 sacks allowed and 110th with 89 tackles for loss allowed.

Cushenberry has been vocal about the unit's need to improve since spring football, when he said the games LSU lost last season "were on us."

And when Orgeron picked Cushenberry to represent the team at SEC media days in Hoover, Alabama, he stepped behind the podium and said "I am more of a vocal leader for the team."

The quiet man was ready to speak.

"When they picked him to go to media day, it was like, 'Lloyd in the spotlight? I don't know,'" Saia said. "But he handled it well."

The sky was clear, oh so clear, when LSU's first football practice of preseason camp began, just long enough for a fresh mood to last until ra…