Devin White's time as an LSU Tiger has ended.

The All-American linebacker announced Monday morning in a video on Twitter that he'll forego his senior season and enter the 2019 NFL draft; multiple media organizations project him as a first-round pick.

"After careful consideration and prayer, in various conversation with those who are close to me, I have decided to sacrifice the remainder of my college career and enter the 2019 NFL draft," White said in the video.

White said he would continue to pursue his bachelor's degree so that he would become the first person in his family to graduate from a Division I university.

For I know the plans I have for you,” declares the Lord , “plans to prosper you and not to harm you, plans to give you hope and a future.Jeremiah 29:11 NIV#GetLive40 #ForeverLSU pic.twitter.com/ZeOazpbOPc

White's decision came on the final day that underclassmen were allowed to declare for the draft. He leaves as one of the most dominant defenders to play for the Tigers.

White is the third LSU underclassman to declare for the draft, joining cornerback Greedy Williams and nose tackle Ed Alexander. Since 2012, the Tigers have seen 35 underclassmen leave for the draft before their eligibility expired.

A few players have bucked that trend, with nose tackle Breiden Fehoko and oustide linebacker Michael Divinity announcing early last week that they would be returning for their senior seasons. Defensive end Rashard Lawrence announced on Friday night that he would be returning, and cornerback Kristian Fulton followed suit Saturday.

Neither player's draft stock was as high as White's. First-round draftees in 2018 earned at least $10 million salaries plus signing bonuses that were at least $5 million, according to Forbes.

Some mock drafts list White as high as a top 10 pick, which could yield a salary of at least $15 million and signing bonuses of at least $10 million.

Devin White at LSU: Looking back at our favorite photos through the years 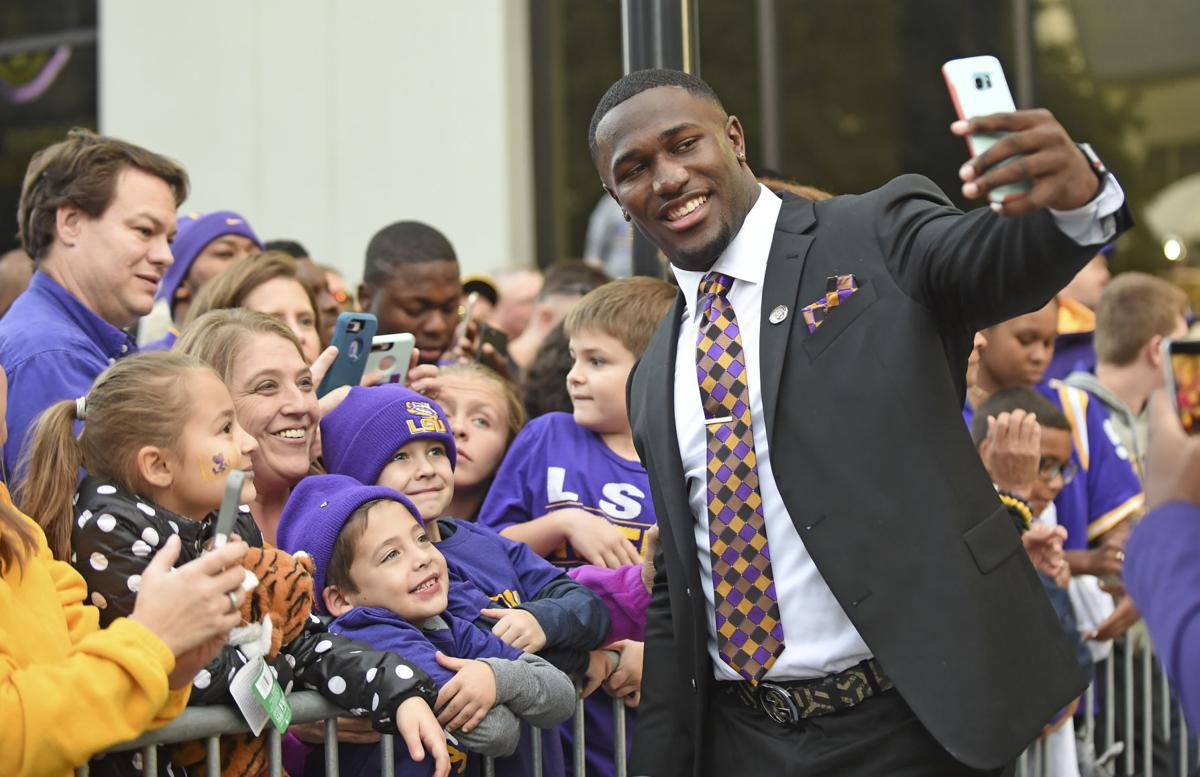 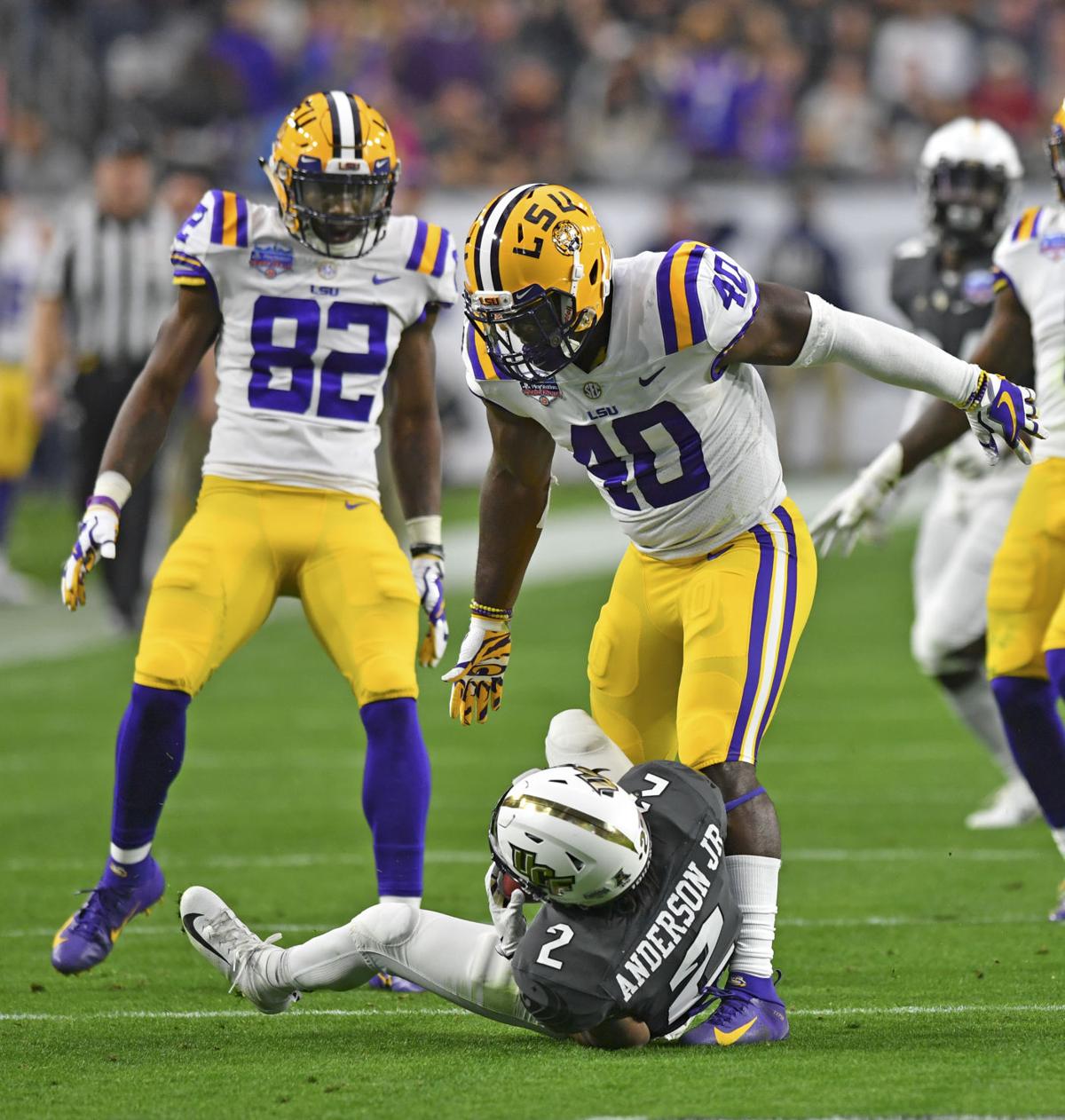 LSU linebacker Devin White (40) trips up as Central Florida running back Otis Anderson (2) goes down on the catch following the punt in the first half of the PlayStation Fiesta Bowl, Tuesday, January 1, 2019, at State Farm Stadium in Glendale, Az. Catch interference was called on White. 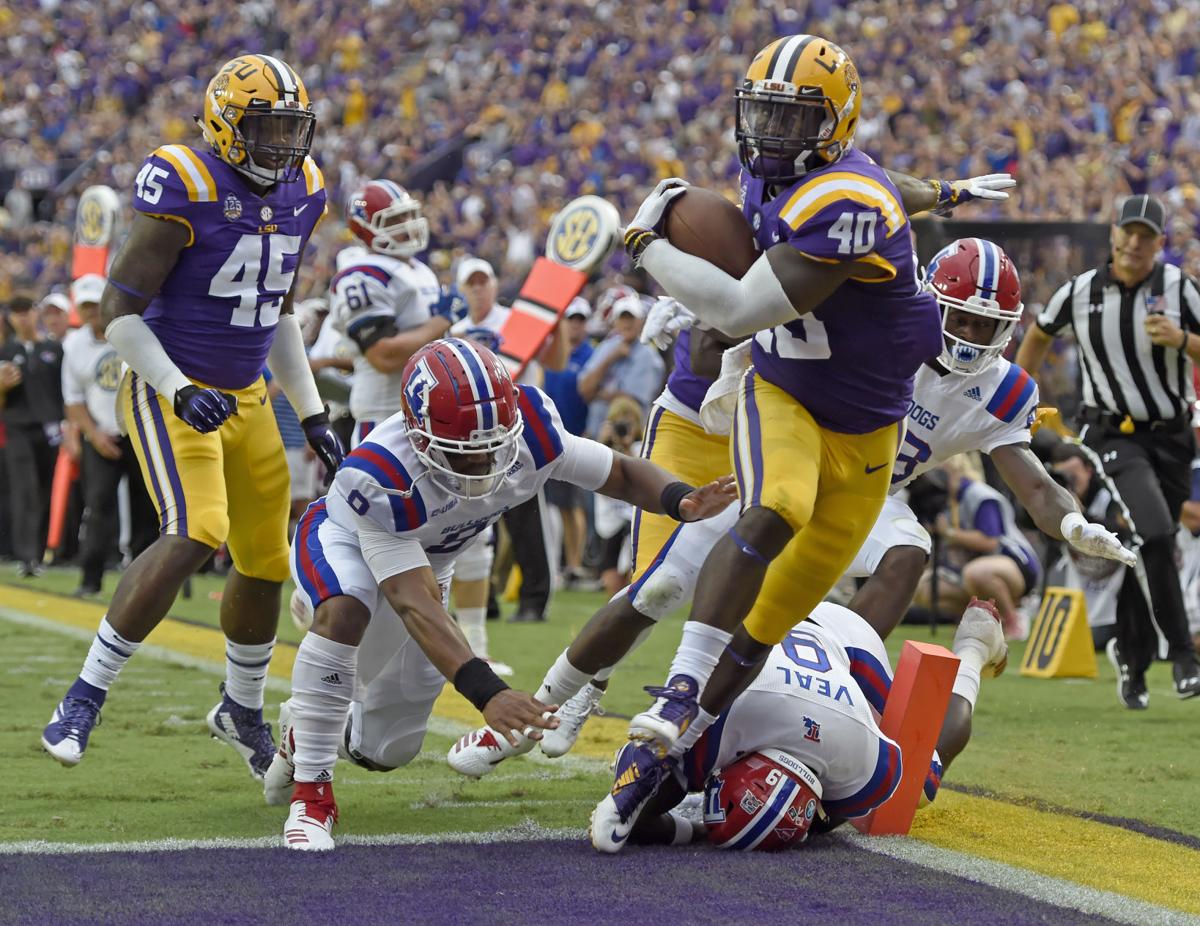 LSU linebacker Devin White (40) scores an apparent fumble recovery touchdown return but stepped out of bounds just before the goal line during the first half of LSU's game against LA Tech in Tiger Stadium Saturday Sept. 22, 2018, in Baton Rouge, La. 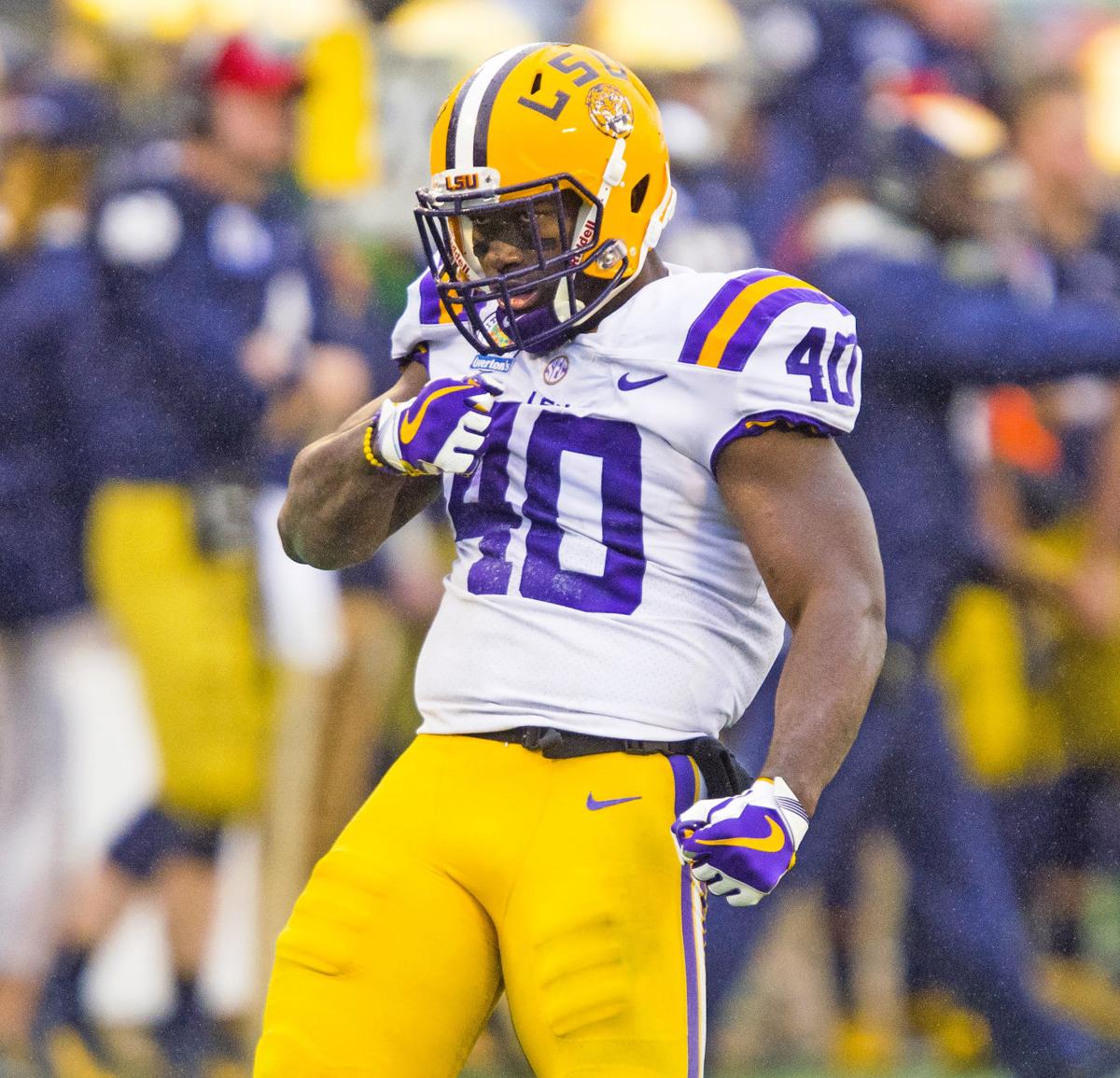 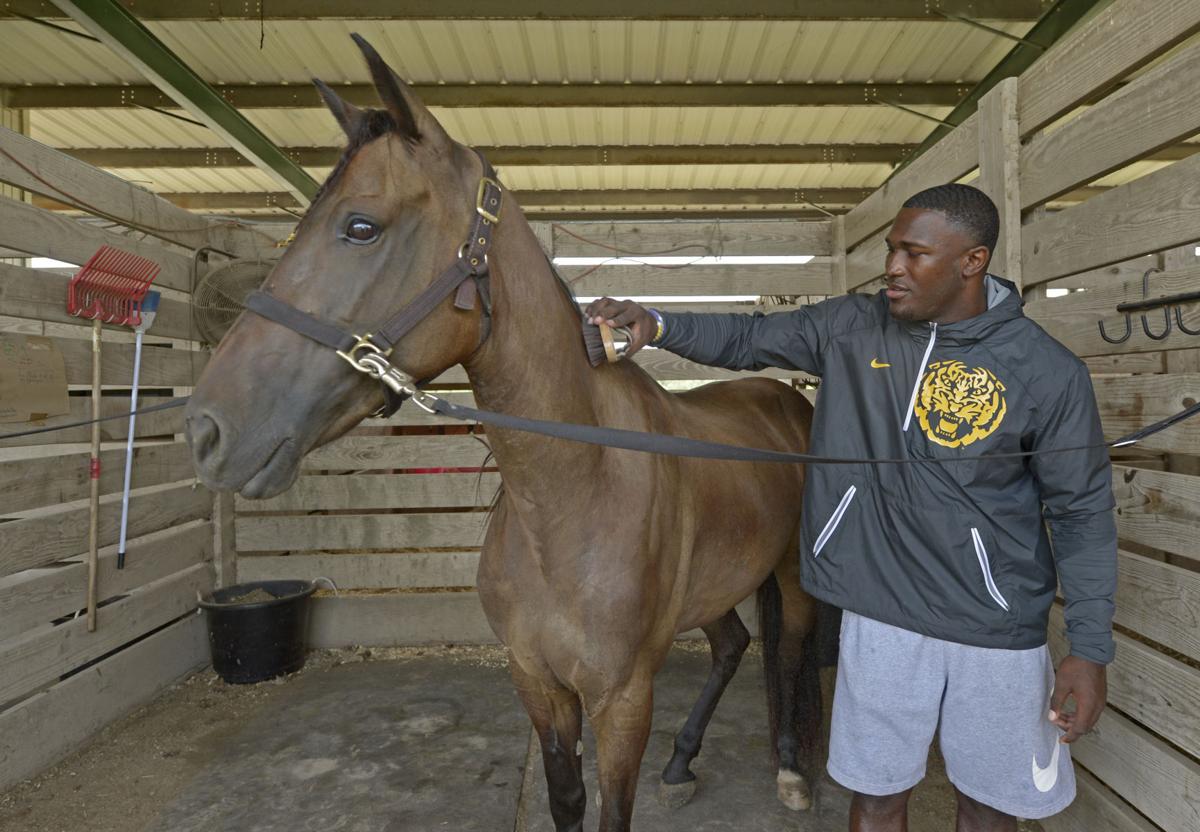 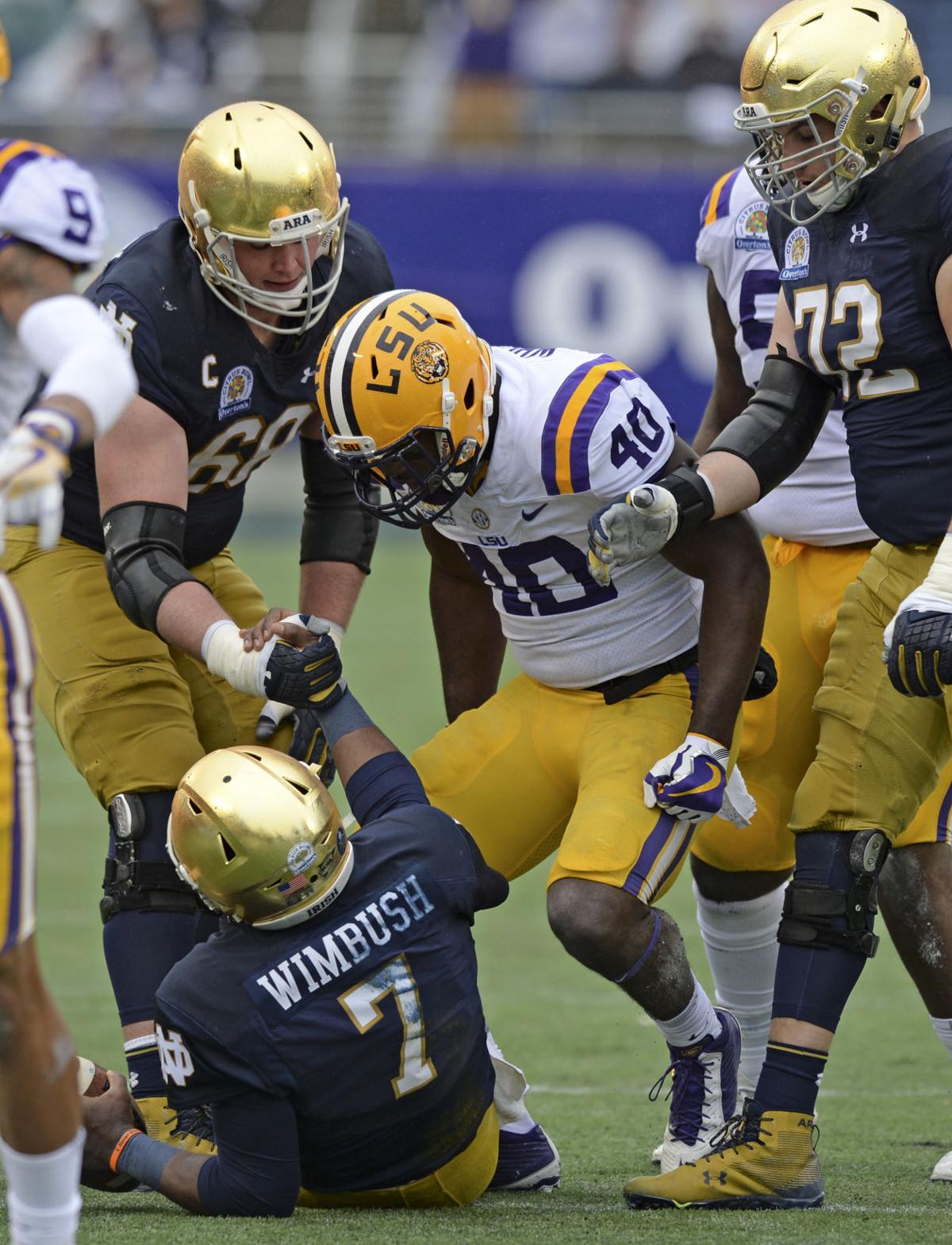 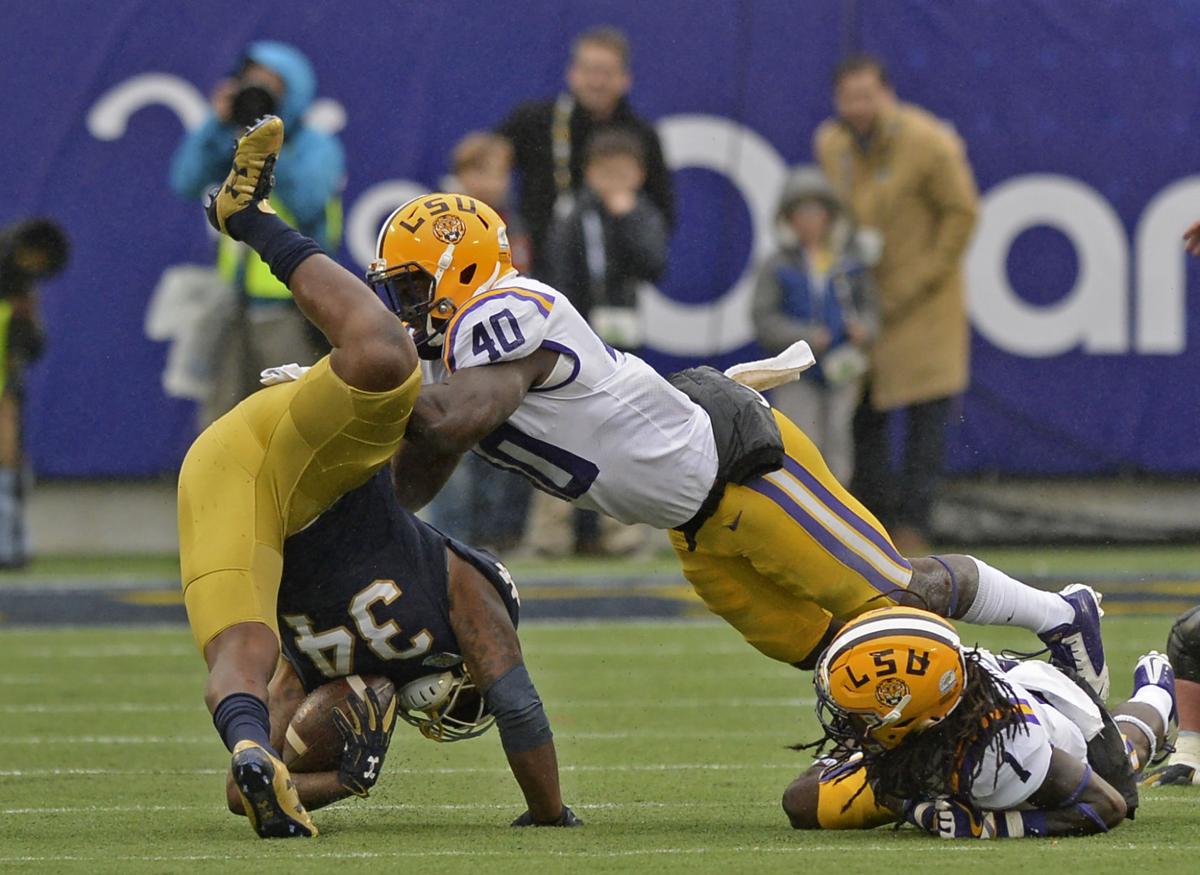 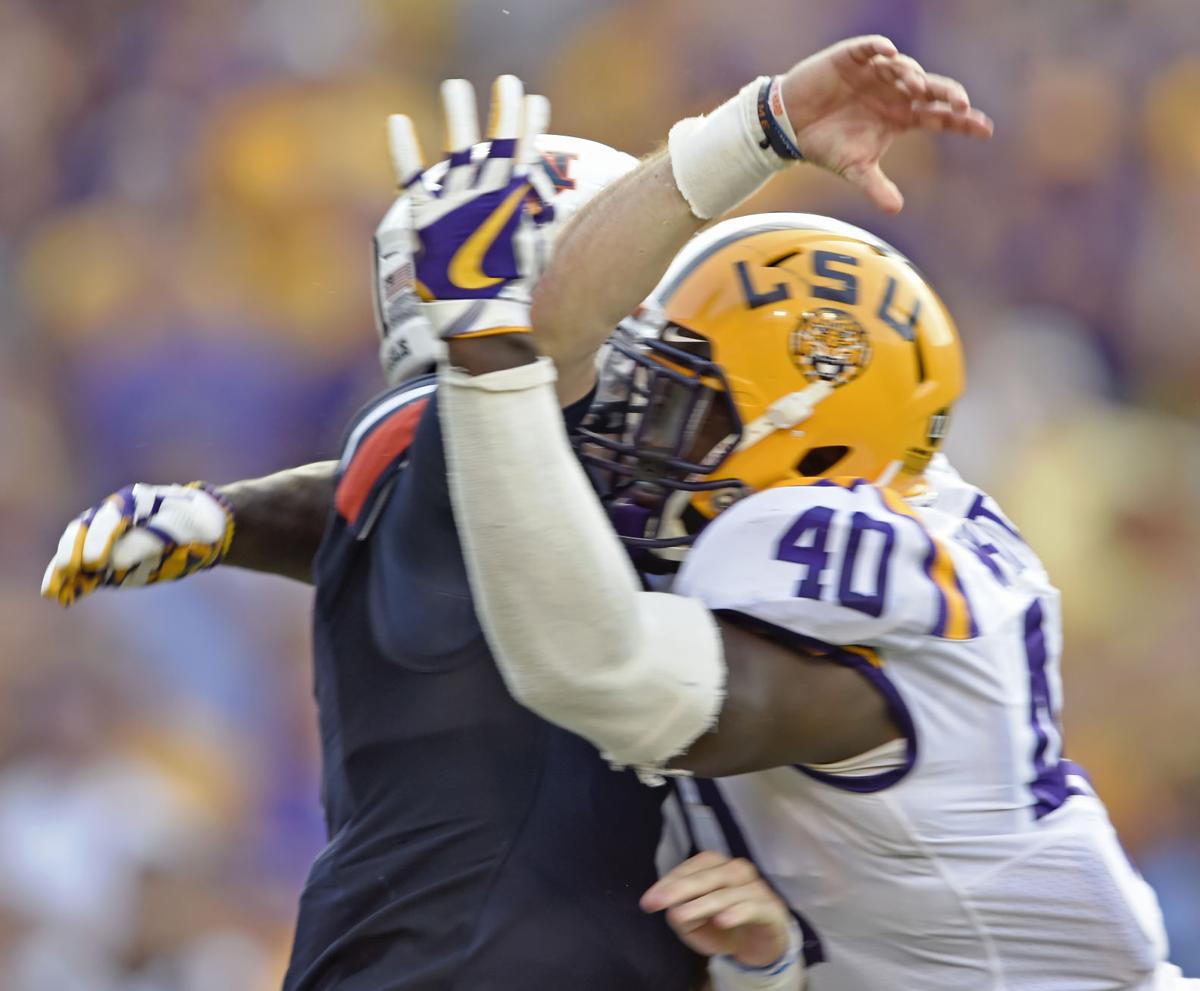 LSU linebacker Devin White (40) is a motion blur hitting Auburn quarterback Jarrett Stidham (8) to try and stop the pass during the second half of LSU's football game against Auburn Saturday Oct. 14, 2017, in Baton Rouge, La.. LSU won 27-23. The pass was incomplete. 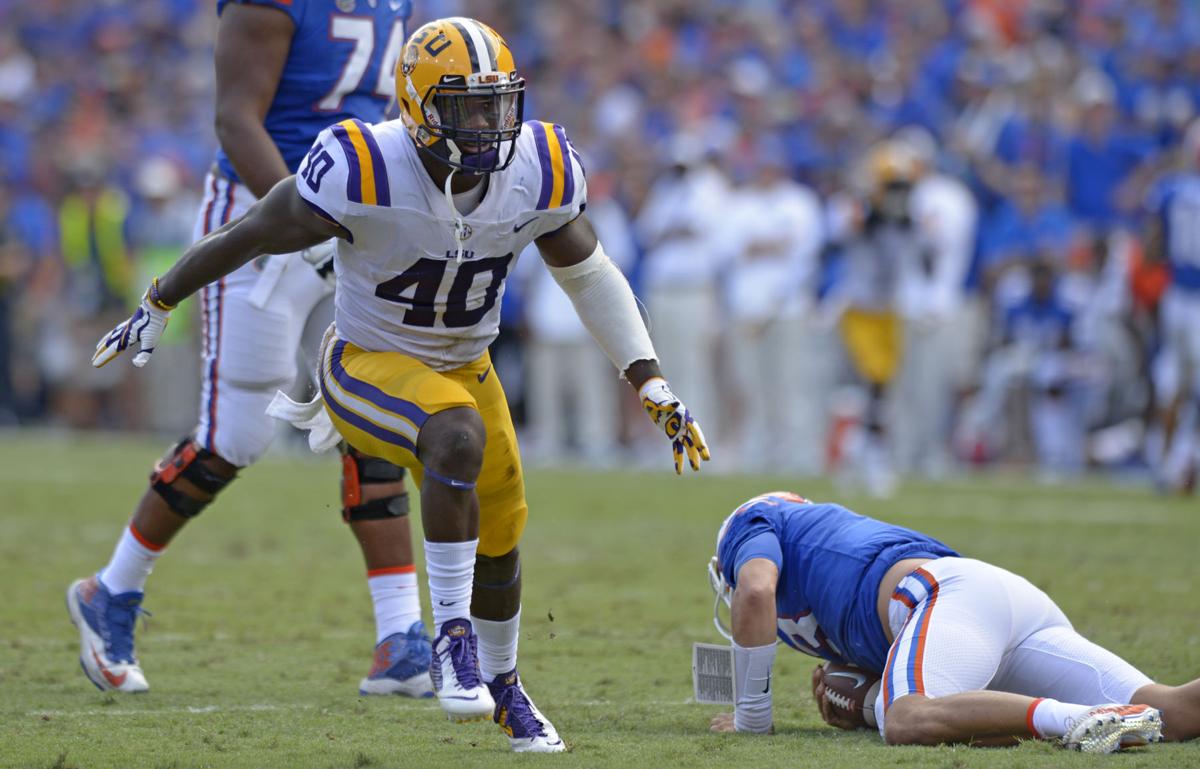 LSU linebacker Devin White (40) celebrates after sacking quarterback Feleipe Franks (13) in the first half against Florida, Saturday, October 7, 2017, at the University of Florida's Ben Hill Griffin Stadium in Gainesville, Fla. 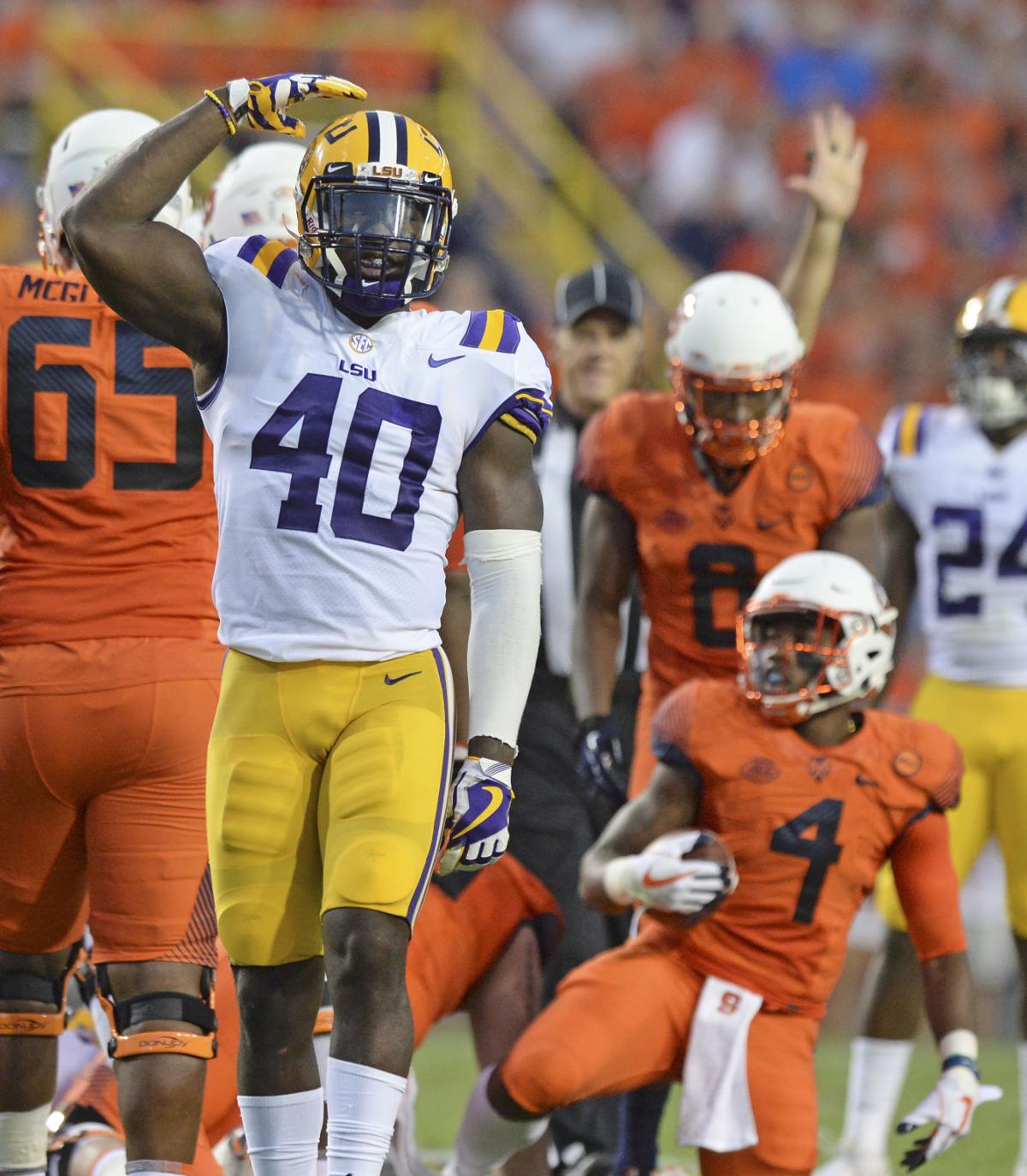 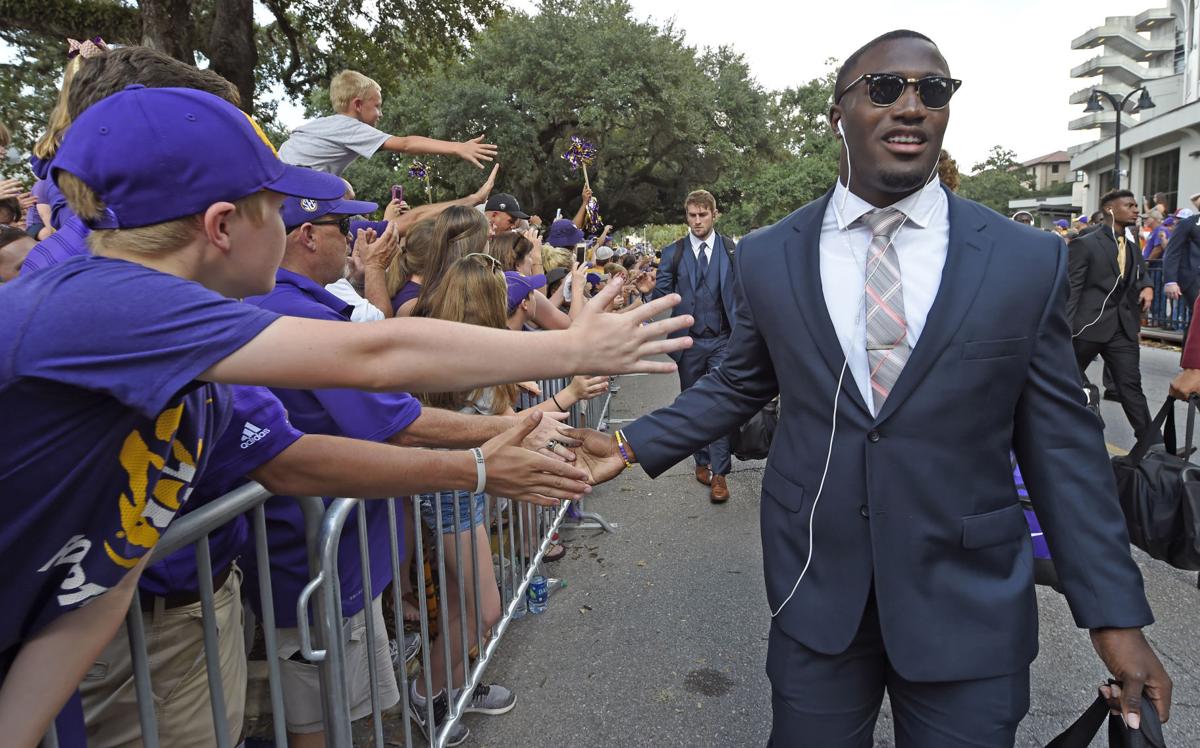 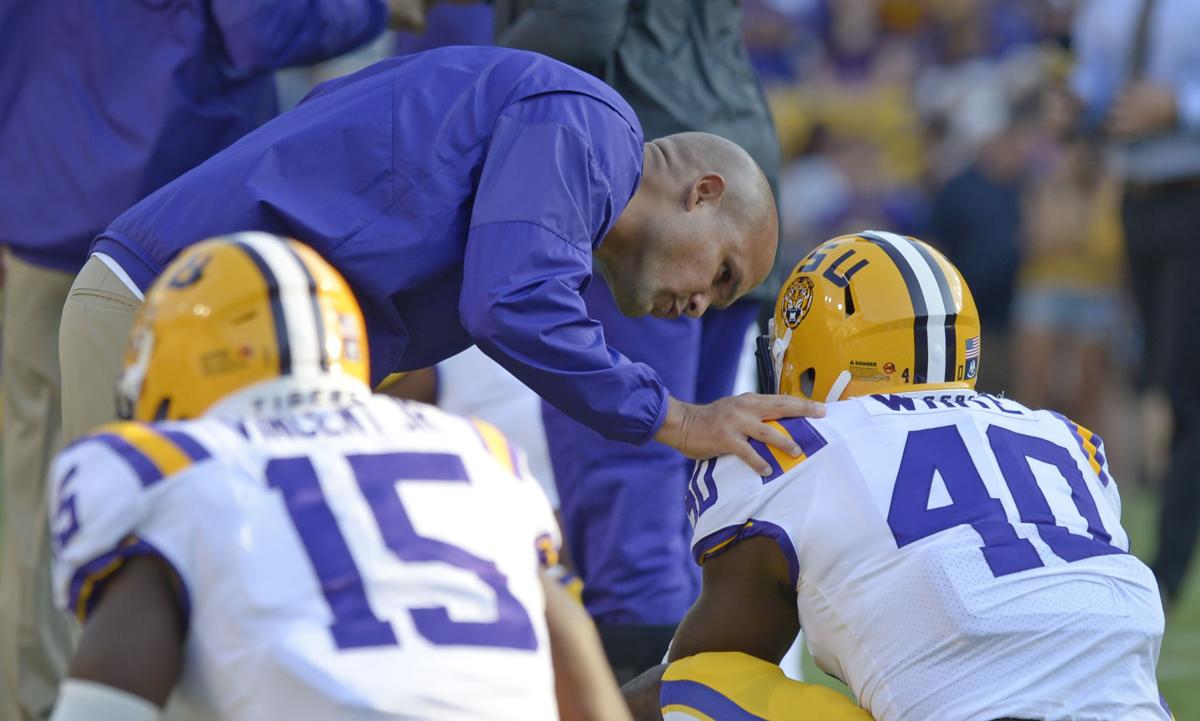 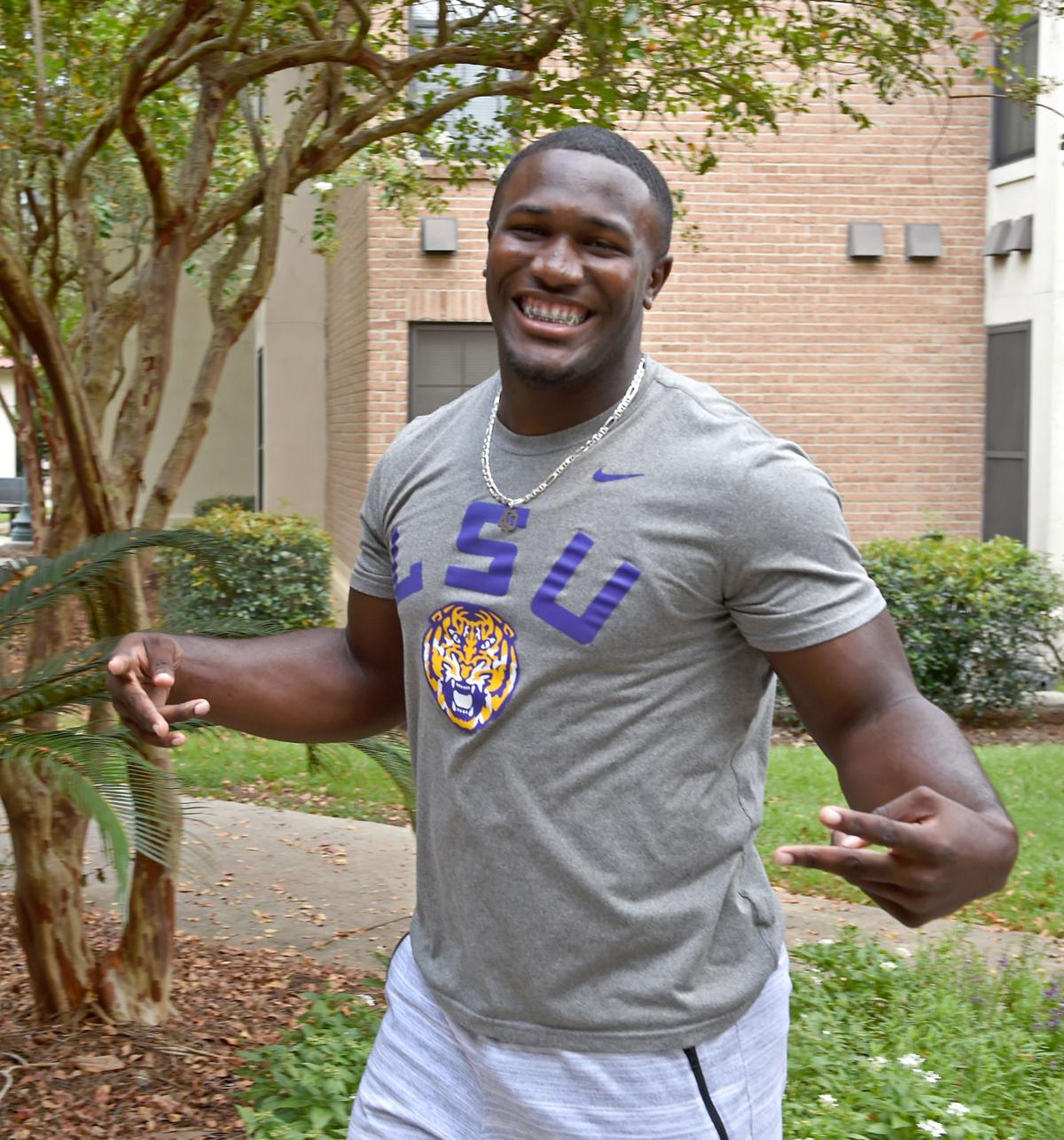 LSU LB Devin White mugs for the cameras as he arrives at West Campus Apartments Sunday during the check-in period. 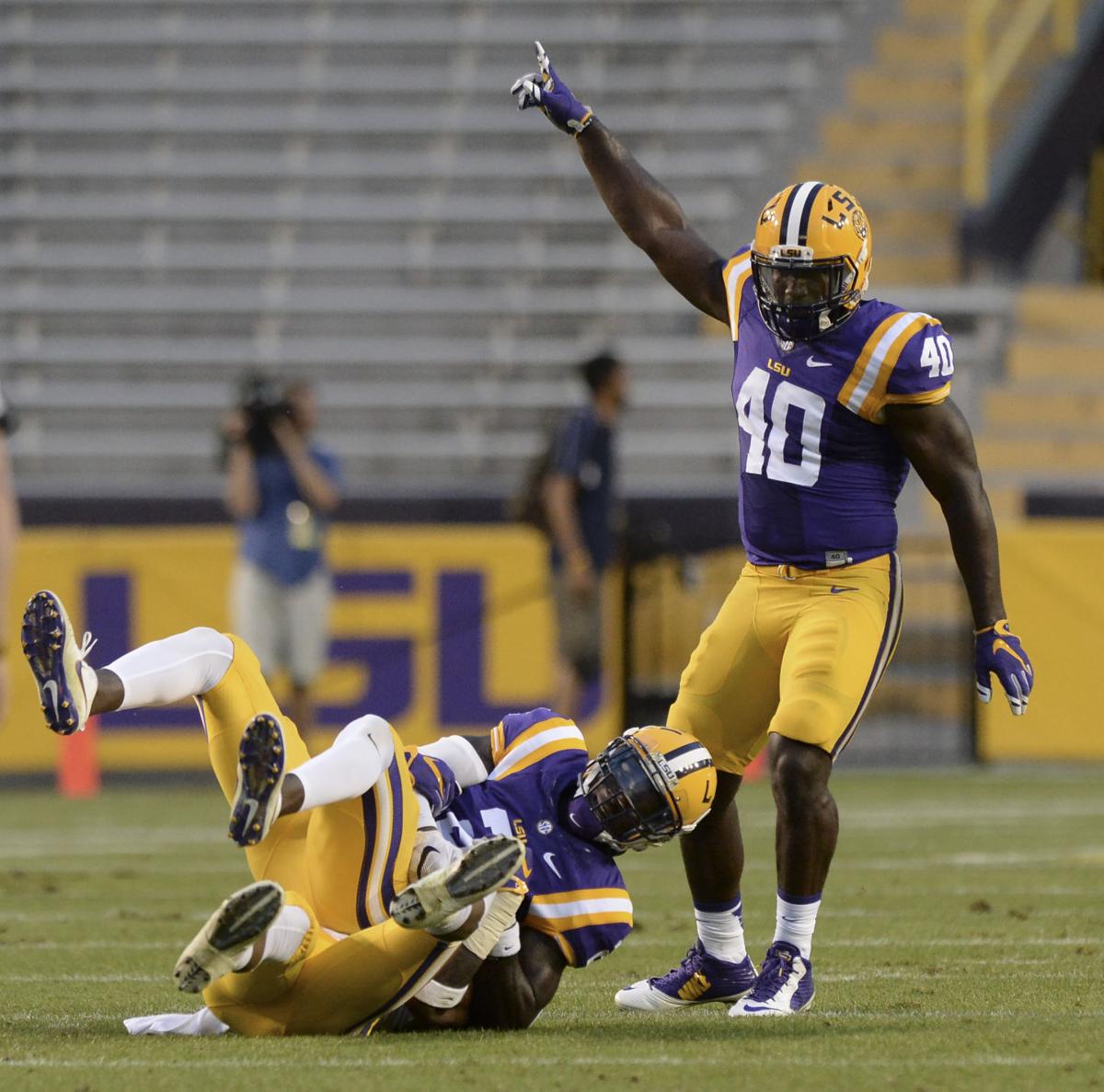 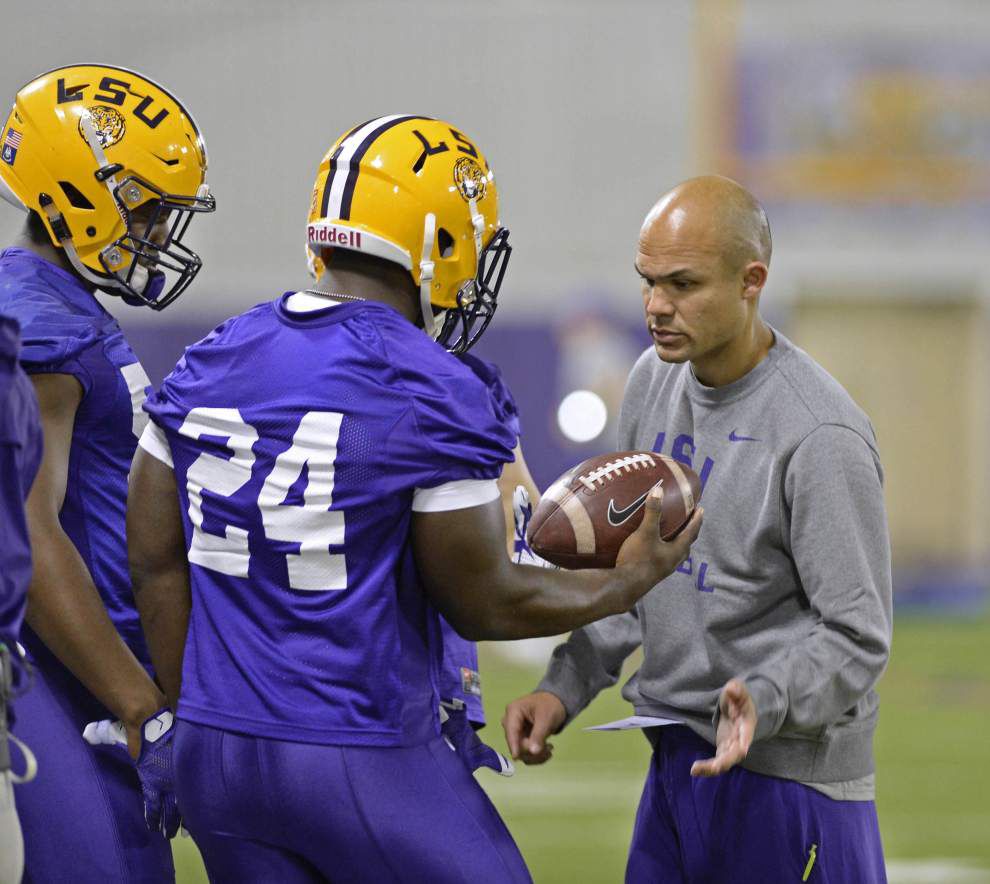 Leading up to the Fiesta Bowl, White told reporters that his decision wouldn't revolve around salary — that "some people just play for the money" and that he’s "not one of those guys."

White has established himself as one of the greatest linebackers in LSU history, joining former players from Mike Anderson to Michael Brooks to Bradie James in the pantheon of top-level defenders.

He's the only player in LSU history to win the Butkus Award.

The son of Coesha Standokes-White and Carlos Thomas, White grew out of legend in small-town Cotton Valley, where he played running back and linebacker at North Webster High.

White was actually thought to be a running back at first. He rushed for 5,031 yards and 81 touchdowns in his high school career, and he was ranked the No. 5 running back of the 2016 recruiting class, according to 247Sports.

White moved to linebacker and established his value early, played as a true freshman and was named to the Southeastern Conference All-Freshman team in 2016. One of his best games that season came against Louisville in the Citrus Bowl, when he recorded five tackles and sacked Heisman Trophy quarterback Lamar Jackson in a 29-9 win.

White followed with a stellar sophomore season, when he was named the team MVP, All-SEC first team and second-team All-America. He was the first SEC player to be named the league's defensive player of the week four times in one season.

White endeared himself to LSU fans with his country lifestyle, maintaining his own mare, Daisy Mae, at Farr Park Equestrian Center a few miles from Tiger Stadium.

Recently, White stirred a social-media craze when he rode Daisy Mae around campus on his way to a school presentation, where he showed classmates how to saddle a horse.

Louisianans had already stirred up social media when White was ejected for targeting near the end of the Mississippi State game on Oct. 20, meaning he'd have to sit out the first half of the Alabama game two weeks later.

The "Free Devin White" movement raised more than $6,200 to put billboards voicing displeasure about the call to the SEC headquarters in Birmingham, Alabama.

Questions surrounding White’s decision followed him all season, and there were moments when he hinted what his mood was at the time.

The Monday after LSU’s 29-0 loss to Alabama on Nov. 3, White seemed to indicate that he would be returning for his senior season. The Crimson Tide had just beaten the Tigers for the eighth consecutive time, and White compared the series to his high school rival, Haynesville High, which beat North Webster in his freshman, sophomore and junior seasons.

“But my senior year?” White said. “We beat them by over 21. I’m going to let you just put that in your head, and we’re going to move on to the next question."

On Dec. 11, a few weeks after the regular season ended, backup linebacker Patrick Queen said that White had told teammates that he was going to stay.

"I just want to make sure that I leave this place better than I found it," White said then. "Such as my legacy and stuff: what do I stand for? And that type of stuff. I want everything to be done the right way. And I don't know if I've reached that limit yet. Like it's really so much concern with me. I said at (SEC) media days that I want to be the best LSU linebacker ever, and I think it's still something I'm chasing to this point. That's why I know for sure that I can't be all the way out."

Now, White will be chasing his dream in the NFL.

The NFL combine is from Feb. 26-March 4 at Lucas Oil Stadium in Indianapolis, and the NFL draft is from April 25-27 in Nashville, Tennessee.

Without White, defensive coordinator Dave Aranda will now be tasked with finding a replacement for his All-American inside linebacker.

Queen played in all 13 games as a sophomore, and he recorded a season-high nine tackles against Alabama and Central Florida. Freshman Micah Baskerville played in 13 games and recorded 18 tackles, and freshman Damone Clark played in 12 games, mostly in a special teams role.

“To the players that will come after me," White said in his announcement video, "there is nothing in life that can’t be reached without prayer, determination and the will to get it done."

Who will replace Devin White at linebacker at LSU? A look at defensive depth for the Tigers

The departure of All-American, Butkus Award-winning linebacker Devin White ends an era of one of the most dominant defenders in LSU history.