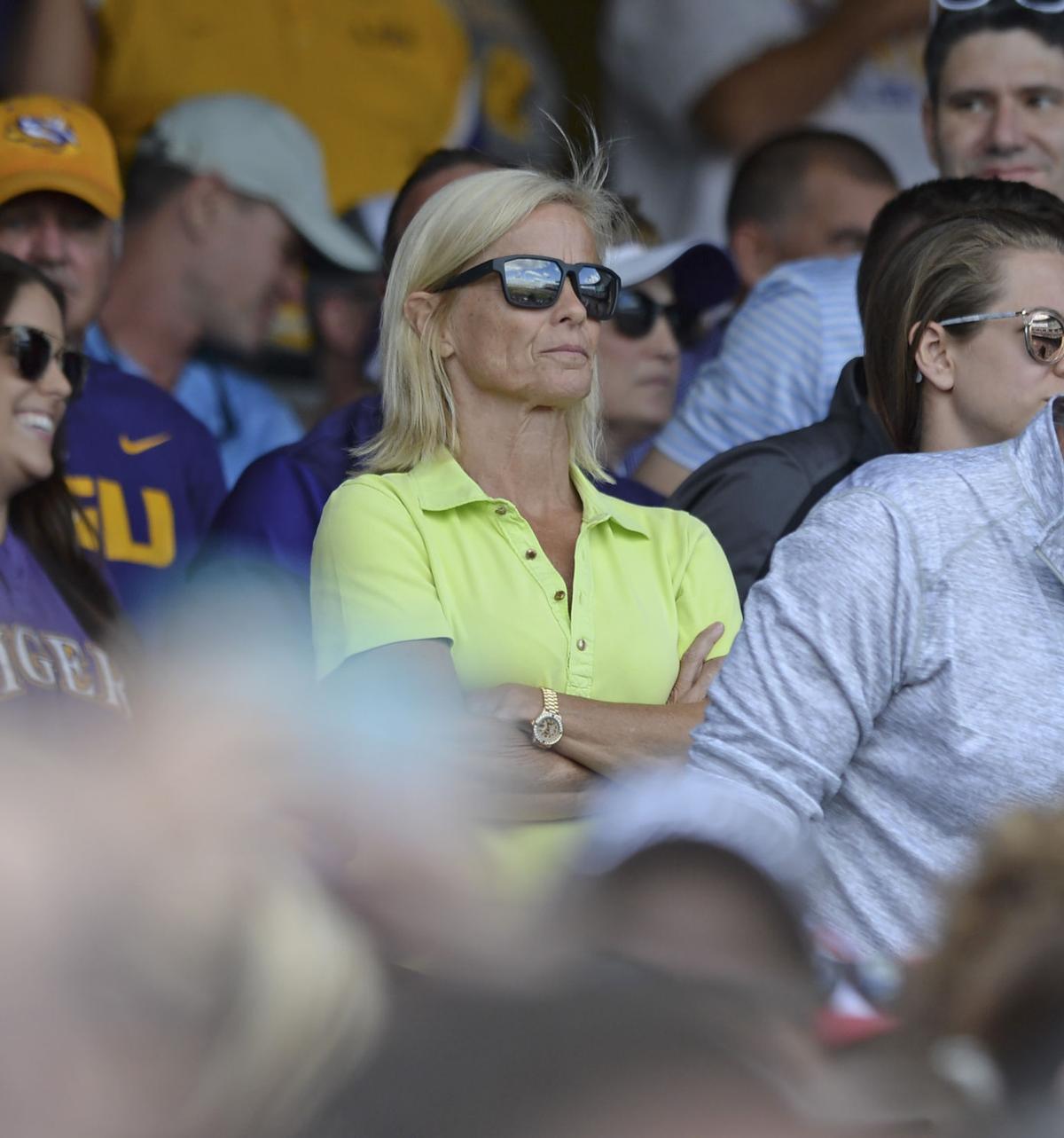 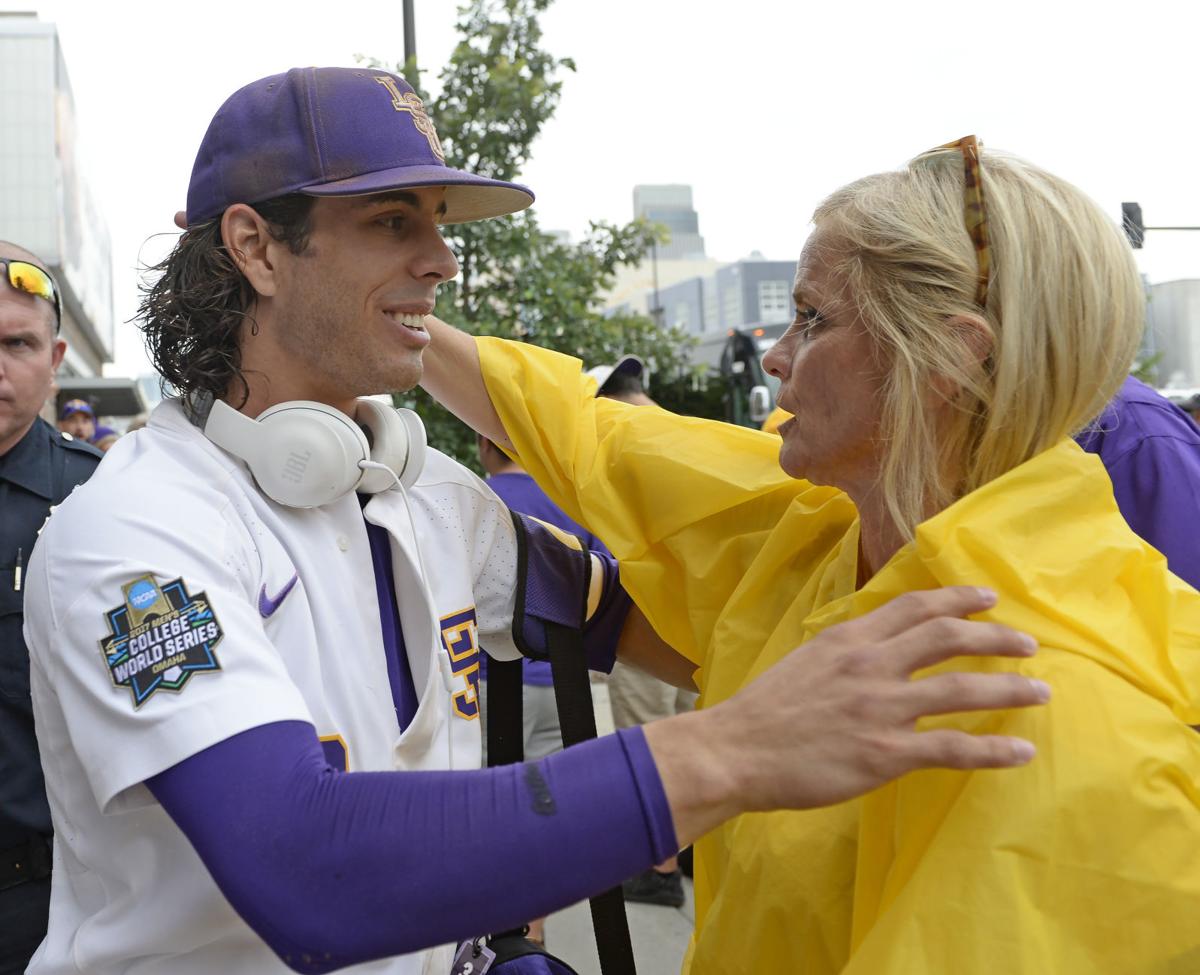 LSU shortstop Kramer Robertson hugs his mom, Kim Mulkey, as the Tigers arrive at TD Ameritrade Park in Omaha, Neb., on Saturday, June 17, 2017, before Game 2 of the College World Series against Florida State.

LSU shortstop Kramer Robertson hugs his mom, Kim Mulkey, as the Tigers arrive at TD Ameritrade Park in Omaha, Neb., on Saturday, June 17, 2017, before Game 2 of the College World Series against Florida State.

Kim Mulkey led Hammond High School to four state titles, played point guard on two national champions at Louisiana Tech, won a gold medal with the U.S. Olympic team in 1984 and has led Baylor to a pair of NCAA championships. These days, though, she’s just a mom in the stands at the College World Series, watching her son Kramer Robertson, play shortstop for LSU. We sat with her in those stands at TD Ameritrade Park on Sunday and talked with her about life, baseball, basketball, and her son’s now-infamous bleached-blond hair:

Q: Everyone else in the world seems to have an opinion, so what do you think about Kramer’s hair?

A: I think it’s extremely ugly. Being a coach, I appreciate the team-bonding and that he wanted to participate. I’m not surprised that he didn’t shave his head or get a Mohawk, because that would have been even uglier. At least he was trying to be a good teammate.

Q: Kramer had a great game Saturday, going 3 for 3 with a walk after starting the CWS 1 for 18. What advice did you have for him, if any?

A: He was hitting the ball hard. That’s baseball. You keep hitting it hard, you’re going to find those holes. Don’t lose your confidence. Keep doing what you do in the field and be a good leader; be happy that your team is winning and it’ll come around. It did yesterday. It’s a sport of failure, but your team’s winning. You’re playing for the national championship, and you’re a big part of this team whether you’re going 1 for 18 or 15 for 18. Just keep doing what you’ve been taught to do.

Q: Have you heard of the Kim Mulkey drinking game every time they show you on TV in the stands?

A: I’ve heard of that. Of course, I never know when I’m on TV. But (Saturday) I did because the cameraman was coming right up in my face. I whispered in his ear, ‘Tell your people back in the studio these are (Michael Papierski's) parents right here. Put the camera on them. There’s (Zack) Hess’ daddy; he’s going to come in the game before it’s over. There’s (Caleb) Gilbert’s parents and Beau Jordan’s brother.’ They listened to me.

Q: You’ve coached and played with national championships on the line. What’s important to remember in these situations?

A: I never want to over-coach. Don’t allow the kids to get uptight. It’s a different setting in that there’s bigger TV coverage, more people. It’s for the national championship. But just go do what you’ve been taught to do. The team that will win is the team that makes the plays — a big hit, a big defensive play, a pitch. That’s usually what separates them. Both teams are good, or they wouldn’t be in this position.

LSU and Florida, familiar foes — even friends? — meet with everything on the line in the CWS championship

OMAHA, Neb. — A day before their teams were to meet for the first game of the College World …

Q: Was it good for women’s basketball to have Mississippi State upset Connecticut in the Women’s Final Four semifinals? (Note: State beat Baylor in the regional final as well.)

A: I don’t know. I’ve been part of a dynasty when I was at Louisiana Tech. It’s hard for me to think what Connecticut is doing is bad. I’ve heard it. I’ve read it. It may be to people who have never been part of a dynasty. We were that dynasty in the early ’80s. I never thought it was bad as a coach and a player, and I don’t think it’s bad today. But when a Mississippi State does that for the first time, it brings extra excitement for their fans and that school — maybe more so than at a Connecticut that does it continually and is expected to do it. Sometimes you get spoiled at a school when you have so many (titles).

Q: Basketball has taken you all over the world, but how much is Kim Mulkey still the girl who grew up playing basketball in Hammond?

A: I told Baylor when I went there 17 years ago, and I still repeat it today: It doesn’t matter where my career takes me; I’m a Louisiana girl. I always will be. I spent 18 years of my life in south Louisiana and the next 19 years in north Louisiana. Baylor was the place I was supposed to be 17 years ago, and it’s the place I’m supposed to be today. But that doesn’t take away my roots. I’ve been in Baton Rouge more in the last four years than I have in my life because of Kramer, and it’s made me realize how much I miss the food. It’s been a fun, fun four years to watch him grow up.

Q: What are you most proud of Kramer for? He was very honest about how tough it was driving home to Waco while LSU came to the CWS in 2015.

A: That was his rock bottom. I said, ‘I agree with you. Let me give you a hug. Let me vent with you. But at the end of the day, are you good enough to play at LSU? If you are, figure it out. In the end you’ll be rewarded.’ He’s had two great years. I wish all parents — and I mean this because of what I do for a living — would understand that when you play at an elite level of college athletics, your freshman and sophomore years are your most difficult times. Stay the course and you’ll be rewarded. Too many kids and parents bail out, blame others. They want things quickly because that’s the world we live in. It wasn’t that he had to wait his turn, but he was behind Alex Bregman and those 10 others who went in the (MLB) draft, those kids who were in front of him. But they made him a better ballplayer and a leader.

Q: You’ve accomplished so much as a player and coach, but how much would you like to see him win this championship?

OMAHA, Neb. — Way back on April 29, when LSU beat Alabama 4-3 in 11 innings, Paul Mainieri said he breathed a sigh of relief knowing his Tiger…

What's it worth to be there in person as LSU attempts to win its seventh national baseball title?

How it happened: Florida holds on to early lead to take Game 1 of CWS Championship Series against LSU

It's Florida vs. LSU in Game 1 of the College World Series finals...