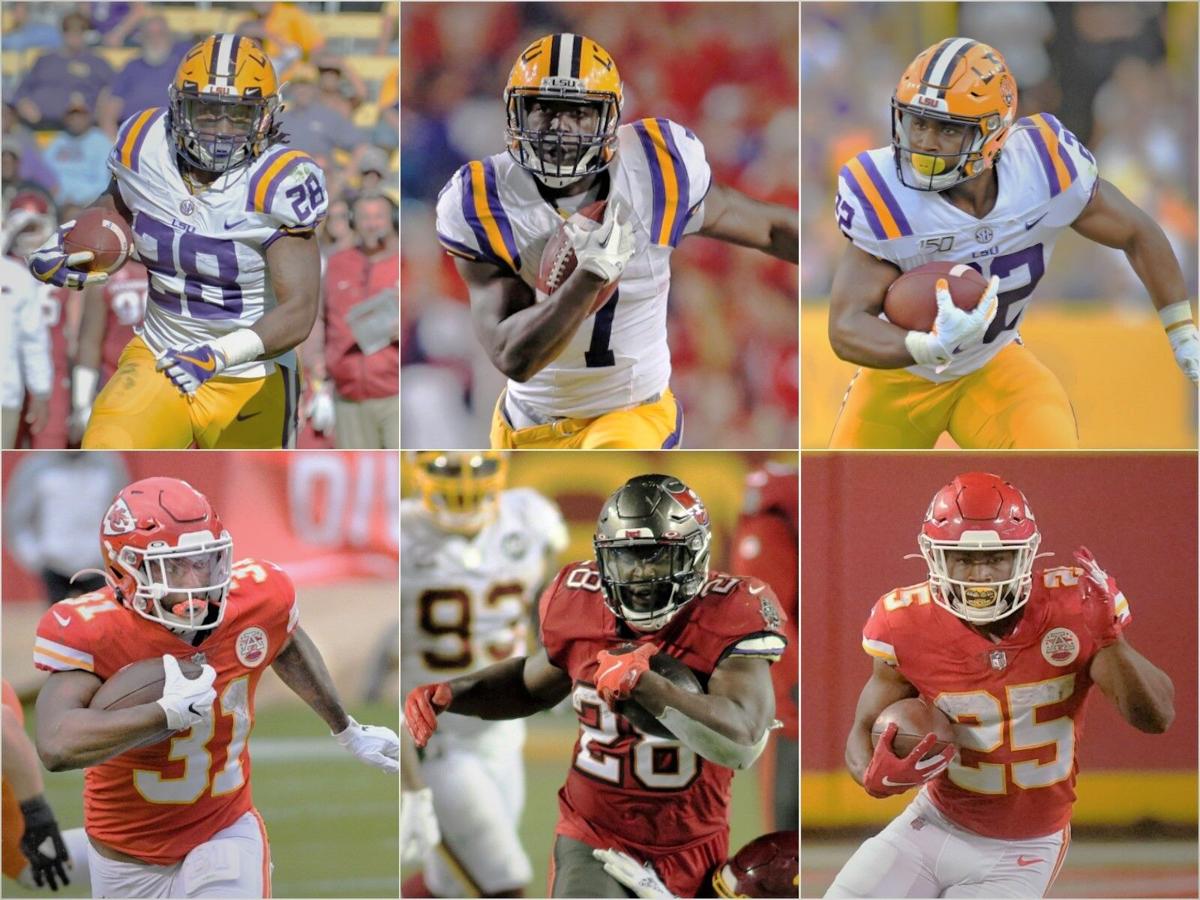 From left to right: Darrel Williams, Leonard Fournette and Clyde Edwards-Helaire at LSU (top) and with their current NFL teams this season (bottom) 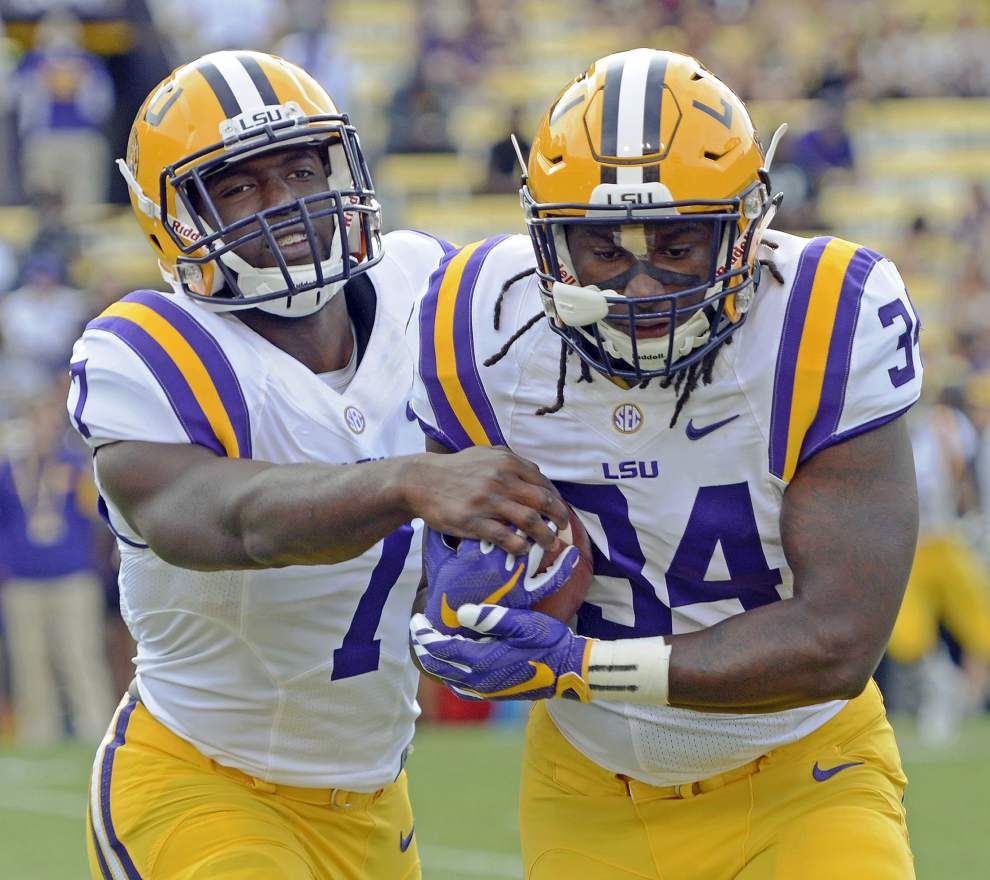 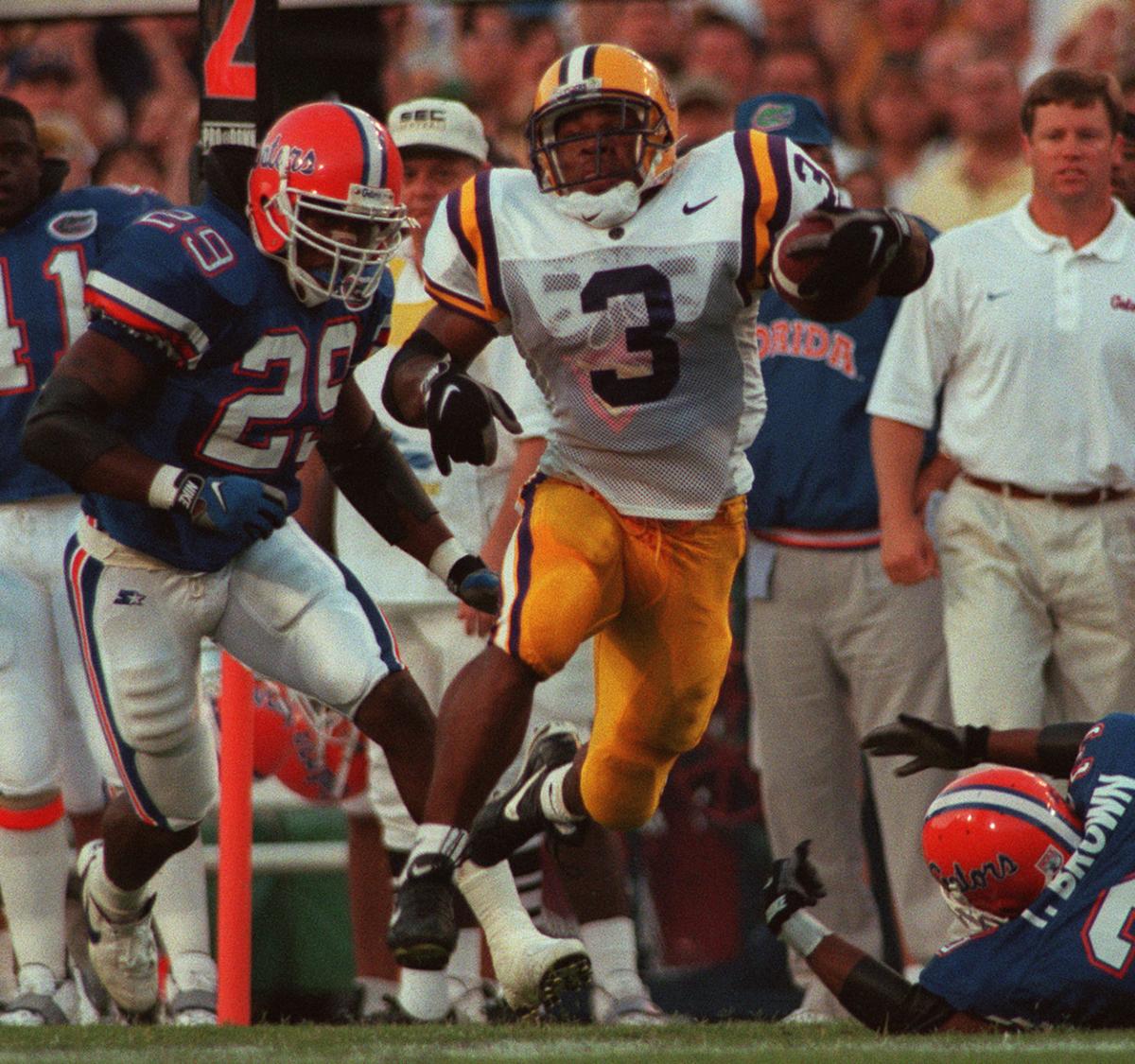 LSU running back Kevin Faulk runs past Gators defenders during LSU's upset of No. 1 Florida in 1997. 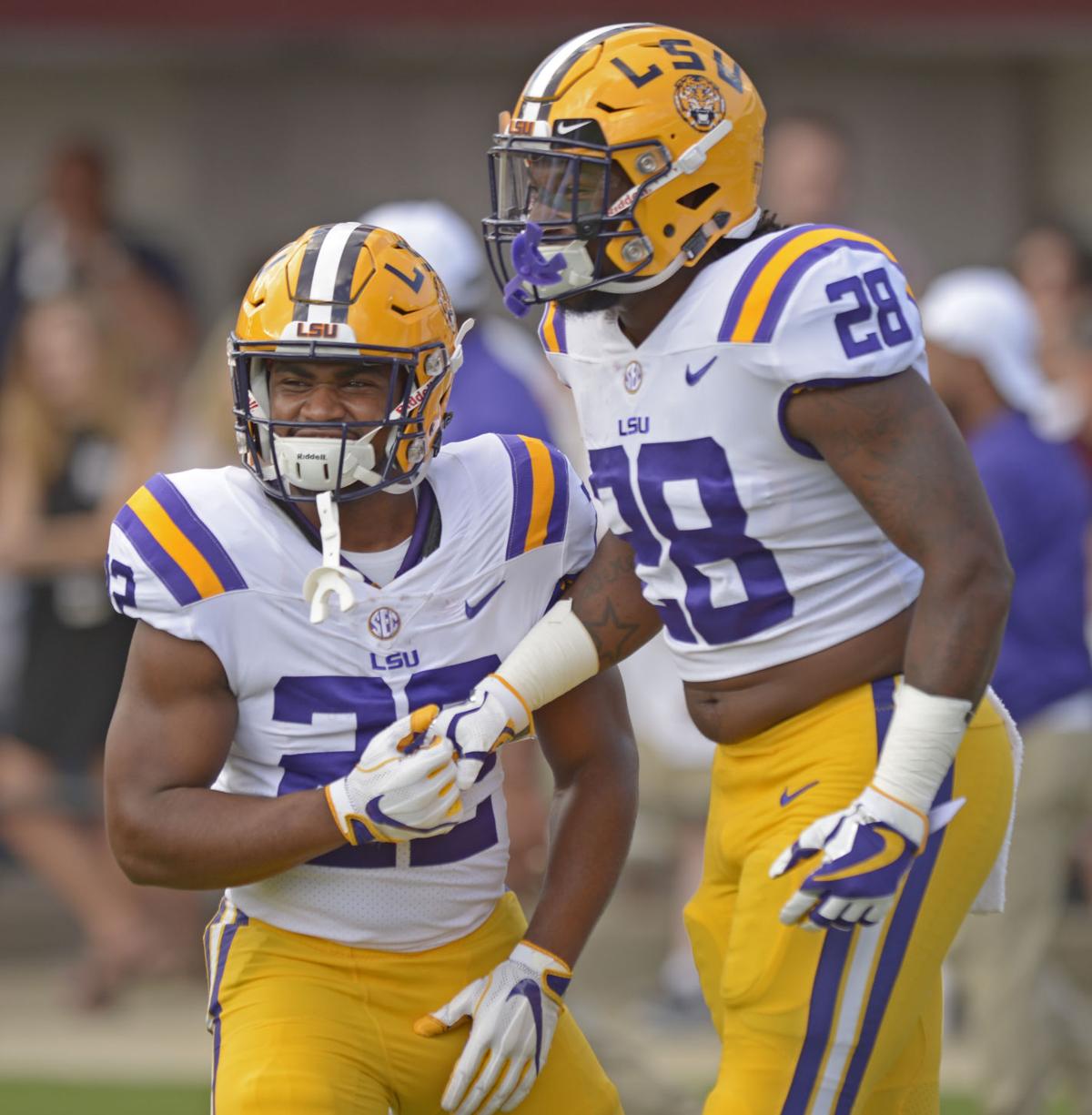 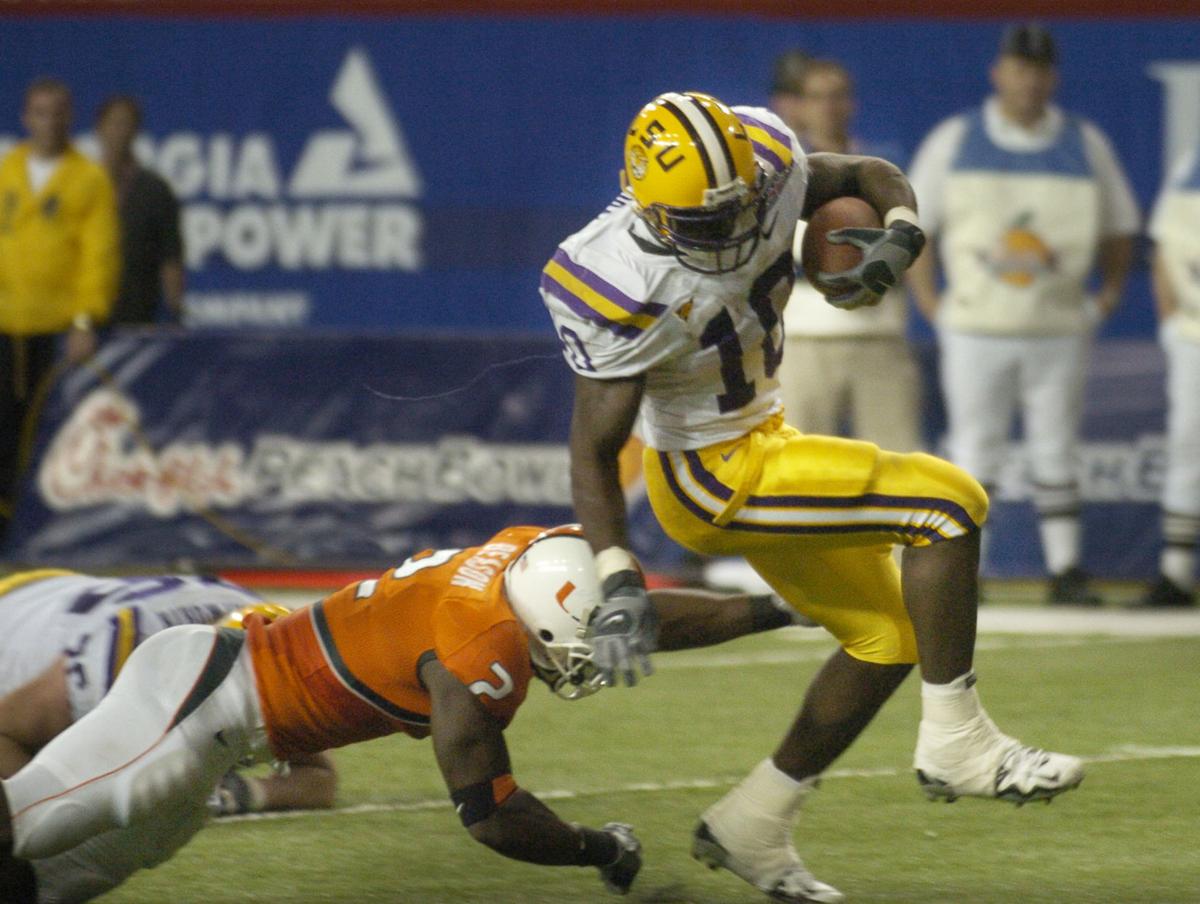 LSU running back Joseph Addai scampers past Miami's Jon Beason for a touchdown during the 2005 Chick-fil-A Peach Bowl. 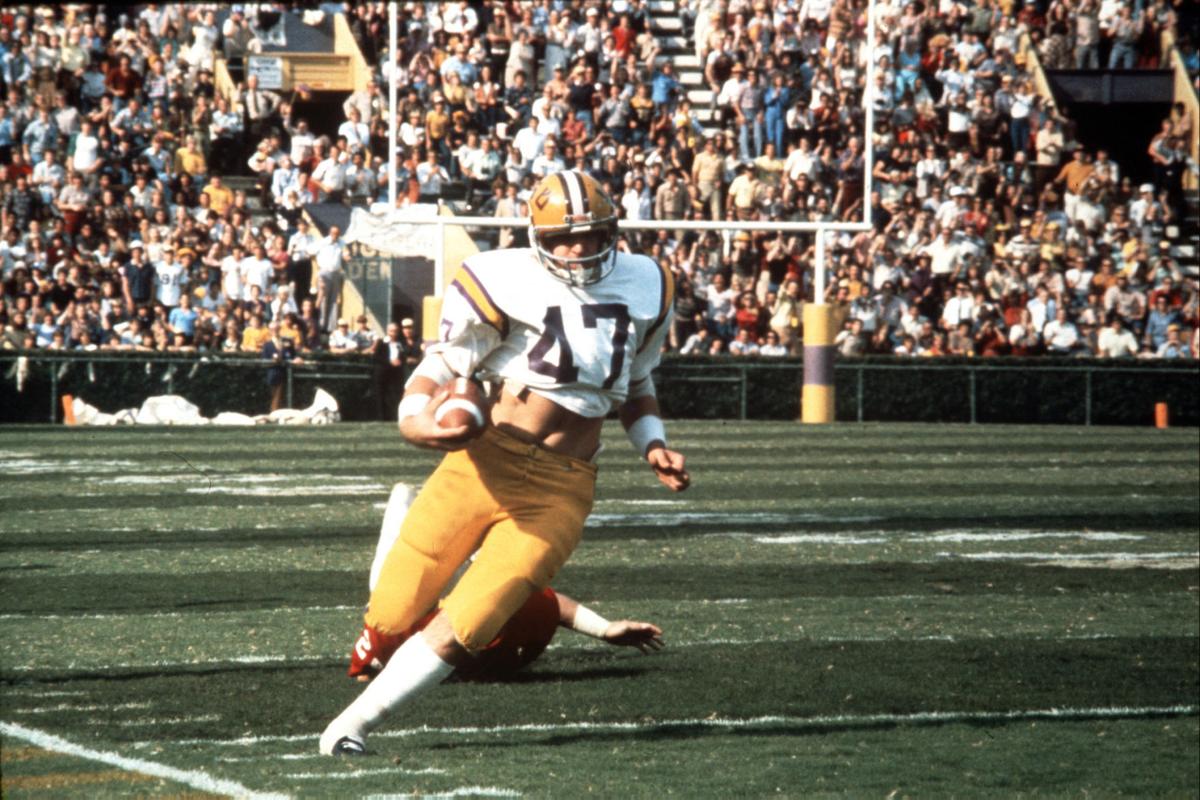 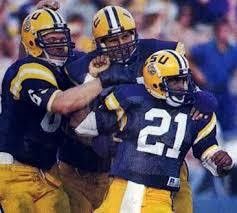 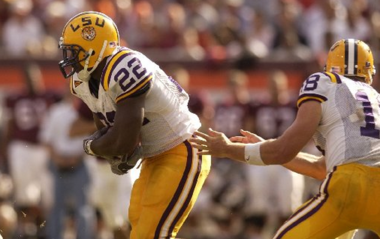 LSU running back LaBrandon Toefield runs against Virginia Tech in Blacksburg, in 2002. 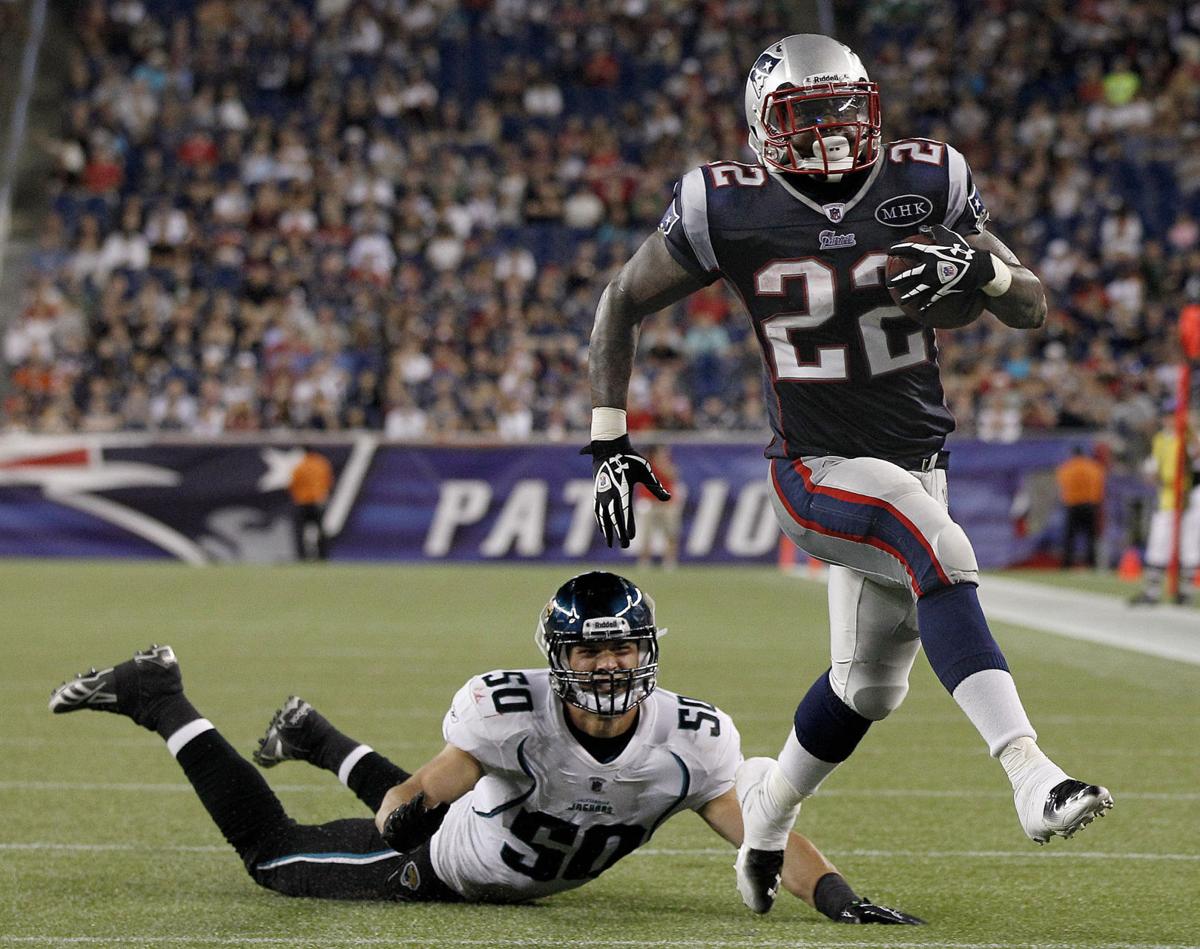 New England Patriots running back Stevan Ridley (22) high-steps toward the end zone for a touchdown against the Jacksonville Jaguars in 2011. 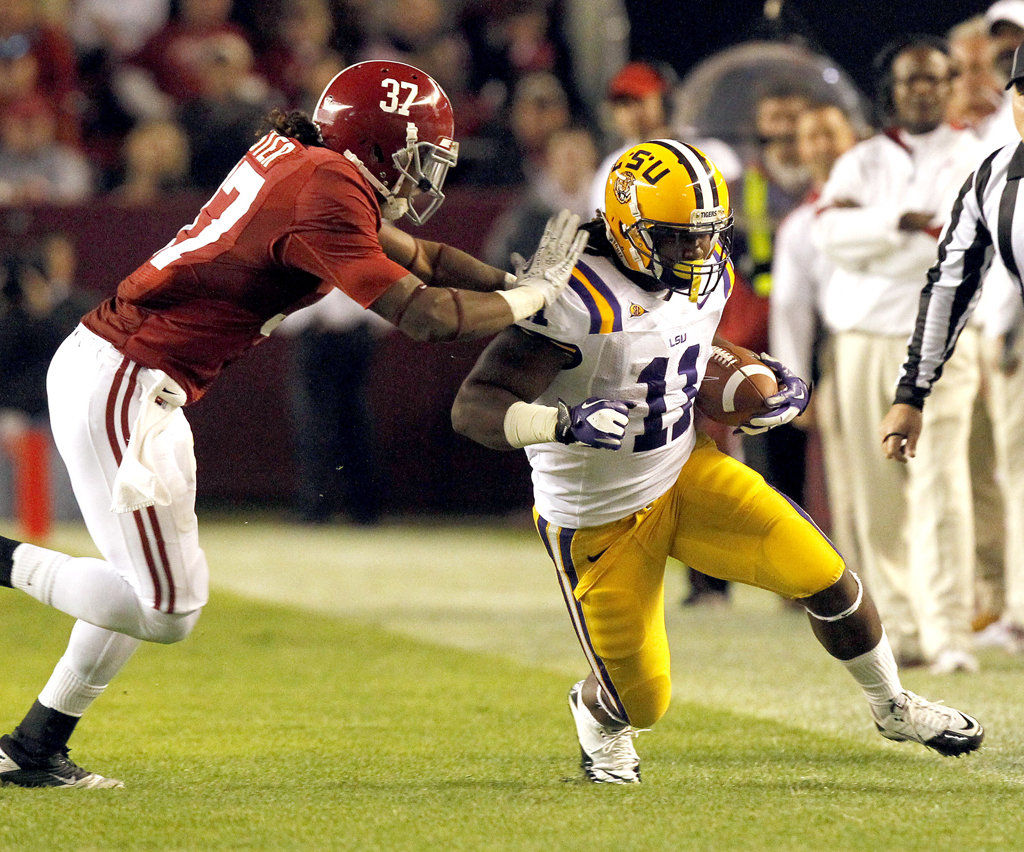 Former LSU running back Spencer Ware (11) is pushed out of bounds by an Alabama defdner in 2011.

From Billy Cannon to Dalton Hilliard to Kevin Faulk to Joseph Addai, pick a point in modern NFL history and it's a safe bet that an LSU running back isn't far away.

But when the Kansas City Chiefs and Tampa Bay Buccaneers face off in Super Bowl 55, the current trio of LSU running backs on NFL rosters has a chance to earn a handful of footnotes all their own.

The biggest? Clyde Edwards-Helaire, Darrel Williams and Leonard Fournette will be the first former Tigers running backs to meet on opposite sides of a Super Bowl matchup.

Sunday's game will mark the 42nd time since the AFL-NFL merger in 1970 that any two former LSU running backs each touched the ball as opponents in a game, according to research by The Advocate.

Of the first 41 such matchups, only three have come in the playoffs:

The trio on Sunday will be the first LSU running backs to meet in the playoffs since 2015, when former Chiefs running back Spencer Ware helped lead Kansas City to a 30-0 victory over Alfred Blue and the Houston Texans in the wild card round.

The matchup that occurred most often showcased former Tigers backs Kevin Faulk and Joseph Addai, with the pair facing off six times as members of the New England Patriots and Indianapolis Colts, respectively.

The quarterback in many of those matchups, Tom Brady, will take the field with Fournette this weekend. The 6-time Super Bowl champion was on the field for nearly half of the matchups this century -- with Sunday representing his 13th career game played with LSU running backs on each side of the action.

MOST COMMON LSU RUNNING BACK MATCHUPS

Since 1970; minimum 1 touch on offense to qualify

The most recent LSU running back showcase -- also involving Brady -- came in Week 12 of this season. Fournette, Edwards-Helaire and Williams all saw the field during the Chiefs 27-24 victory over the Bucs. Williams logged eight snaps on offense but never touched the ball.

Darrel Williams' Super Bowl story? 'Everything comes great to the ones who wait'

Darrel Williams knows a thing or two (or three, or four) about patience.

He figures to be a much bigger part of the offense in the Super Bowl rematch -- especially with health on his side.

"That was the only thing really holding Darrel back, was being able to stay healthy consistently," Chiefs coach Andy Reid said this week. "He spent so much time rehabbing this past offseason and got himself into great shape. ... He's a really smart football player, so you see him produce on the field, but we all have confidence in him."

The Marrero native recorded just 39 carries for 169 yards and a touchdown in the regular season, but emerged as the Chiefs' leading rusher throughout the team's playoff run with 26 carries for 130 yards and a score in wins over the Cleveland Browns and Buffalo Bills.

If Williams, Fournette and Edwards-Helaire each get a touch on offense, they'd become just the fourth LSU trio in the past half-century to claim that calling card. The most recent such game was in 2011 when Kevin Faulk, Stevan Ridley and Joseph Addai each saw action as the Patriots faced the Colts in the Week 13.

(since 1970; all three must have at least one touch on offense to qualify)

In total there will be six former Tigers active, including Chiefs safety Tyrann Mathieu and Bucs linebackers Devin White and Kevin Minter, and Sunday will mark the 20th consecutive season there's been at least one player representing LSU in the Super Bowl.

"LSU is a big school, a big stage, and we've got an opportunity to play on another big stage this week," Williams said. "I wish success to all those guys, and this is a big moment for all of us."

Rabalais: LSU pride runs deep in this Super Bowl, with three former Tigers on each side

The importance of the running back showcase has been a question posed to the three former Tigers early and often in the week leading up to the showdown in Tampa Bay, with the ties running much deeper than purple and gold.

Fournette and Williams each arrived at LSU in 2014, with Fournette departing for the NFL draft after the 2016 season. Williams stayed in Baton Rouge for a final season and a featured role in the Tigers offense and a season to help prepare a freshman to become the next great Tigers running back in Edwards-Helaire. Williams went undrafted the next season before joining the Chiefs as a free agent.

Edwards-Helaire helped lead the Tigers to a College Football Playoff championship in 2019, then rejoined his former teammate after the Chiefs made him the final selection in the first round of the NFL draft last April.

Clyde Edwards-Helaire is prepping for the Super Bowl with Patrick Mahomes and the Chiefs, but he rarely goes long without chatting with his fo…

The working relationship these days, as both players described it? A brotherhood.

"Being able to show him, to help him out, to help him succeed, and help him become the running back that he’s becoming today, it means a lot," Williams said. "I just hope for the most success for him, and you know he’s making the most of his opportunity.”

After Edwards-Helaire went down with an injury in a Week 15 win over the Saints, it was Williams who gained the extra run over the final two weeks of the regular season. His biggest supporter was the man for whom he was filling in.

"Darrel is like a real, legit older brother to me and he’s been guiding me the whole way," Edwards-Helaire said. "So it was special for me to know that he was going to be in the room with me.”

But it was Fournette's highlights that Edwards-Helaire admits he spent "millions" of hours watching during his high school days in Baton Rouge, and watching No. 7 truck opponents in purple and gold is what drove him to become a great Tigers running back himself. Still, the rookie made a compelling argument why it's his side of the LSU-per bowl that Tigers fans should place their rooting interest.

"[I was] just a guy early on … who didn’t really get as much fan love at first, other than my high school reps and everything, at LSU," he said. "So I still feel like I still need some fan love from over the top and back in from LSU on that end. So ultimately I feel like it all should come back this way."

*Minimum 1 touch on offense by each player to qualify

Devin White rode from LSU to Super Bowl. The next ride? Hopefully on his horse, trophy in hand