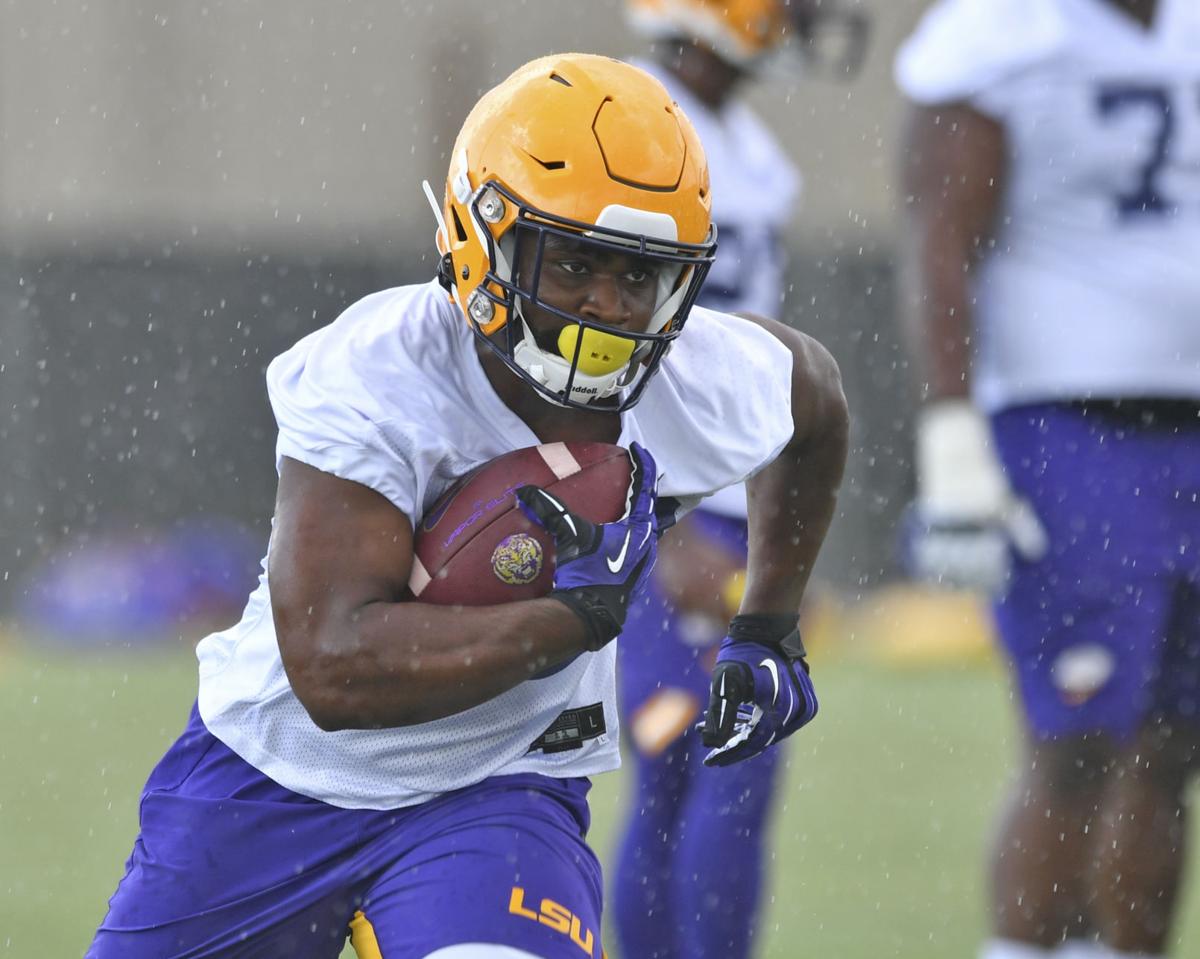 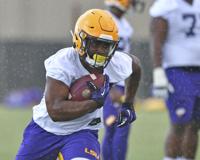 LSU running back Clyde Edwards-Helaire (22) carries the ball in a drill as LSU holds its first fall practice, Friday, August 2, 2019, at the Tigers' practice facility on LSU's campus in Baton Rouge, La.

LSU running back Clyde Edwards-Helaire lined up in the slot during an individual drill at preseason practice, and when he took off at the snap, his coach's voice rang loud and clear.

Edwards-Helaire halted in the middle of the field, turned, caught the pass, and turned up field again.

As LSU defensive coordinator Dave Aranda said this offseason, "this would be the Saints influence," the increased amount running backs will be getting out in space as receivers.

It's the trickle down effect from the joint staff meeting between LSU and the Saints during the 2018 summer. That's when Brady, then an offensive assistant under Saints coach Sean Payton, impressed the Tigers' staff with his command of schemes and strategies and eventually won himself a job when a spot opened up on the LSU coaching staff in early January.

Brady packed up his Saints playbook and game film for the 80-mile drive west, and by the time spring football began, he and offensive coordinator Steve Ensminger began installing pass routes for the team's running backs, emulating the way Alvin Kamara and Mark Ingram have been used in New Orleans the past two seasons.

"It's to the point that I've recorded things from the film on my phone to watch it over and over again," Edwards-Helaire said Saturday. "Not trying to mimic, but just understand the thoughts of rotating the defense and then how he would run certain routes."

Using running backs more often in the passing game is one of several new pieces to LSU's reconstructed spread offense — a necessary transformation, LSU coach Ed Orgeron has said, from the ground-and-pound years that limited the Tigers in an era in which teams started to score points at video game rates.

The words "get speed in space" have been used repeatedly by the LSU coaching staff this offseason when describing the goal of its new offense, and both former offensive coordinator Matt Canada and current coordinator Steve Ensminger weren't able to do that very successfully with their running backs the past two seasons.

In 2017 and 2018 combined, LSU running backs totaled 821 rushing attempts and 75 receptions — a 92 percent dedication to rushing, which is a drastic difference from how New Orleans has used its running backs the last two seasons.

Since Kamara joined the team in 2017, the Saints running backs have combined for a total 709 rushing attempts and a total of 243 receptions — a nearly 75 percent dedication to the run, which indicates how diverse Kamara and Ingram are used.

Ensminger said the offense was limited in 2018 because of poor pass protection, which Ensminger attempted to support by keeping running backs in the backfield to aid in pass blocking.

That strategy changed for LSU's Fiesta Bowl game against Central Florida, Ensminger said, when the coaching staff decided to use the running backs as quick passing options for when quarterback Joe Burrow got into trouble.

Edwards-Helaire and former running back Nick Brossette combined for four catches for 30 yards in LSU's 40-32 win, and those kinds of numbers are expected to expand with the addition of Brady's schemes.

"Running backs are here to run the ball and catch passes," Brady said in July. "They're not signed to play at LSU because they're dynamic blockers. That's what offensive linemen are for."

The changed philosophy was clear in LSU's spring game in April.

On the first play, Edwards-Helaire lined up in the slot and caught a three-yard out route to the sideline.

"He's perfect for what they want to look like offensively," SEC Network analyst and former Alabama quarterback Greg McElroy said during the broadcast. "He's a mismatch in the passing game."

Edwards-Helaire had four catches for 22 yards in the scrimmage, and three of the receptions came when he was lined up as a receiver — just as Kamara is often used in New Orleans.

But some of the most telling changes came on the targets on which Burrow and Edwards-Helaire couldn't quite connect.

On second-and-10 during the first drive of the second quarter, Edwards-Helaire (lined up to Burrow's left), cut off the left edge, drove into outside linebacker Andre Anthony toward the inside of the field, then cut back to the outside for an open look.

Edwards-Helaire wasn't able to catch Burrow's pass, but the play demonstrated what Burrow said Saturday: "We're looking to get (Edwards-Helaire) matched up on some linebackers."

And as the individual drills during preseason camp indicate, the LSU running backs are learning to base their routes on whether the defense is in man or zone coverage, something wide receivers regularly do.

If it's man? Beat the mismatched linebacker with speed.

If it's zone? Pop down in uncovered space for an easy dump pass.

Kamara confounded NFL linebackers that got matched up with him, and Payton regularly exploited those mismatches, especially in the red zone.

Last season, Kamara finished second in the NFL with 21 receptions inside the 20 (second only to New Orleans receiver Michael Thomas), and Kamara recorded 128 yards and three touchdowns on those receptions.

Even inside the 10, Kamara had seven receptions for 30 yards and two touchdowns.

Edwards-Helaire said LSU running backs will also be threats in the red zone and on the goal line — situations the Tigers also need vast improvement from the 2018 season, when they ranked 119th nationally with a 51.67 percent touchdown conversion rate once they got inside the opponent's 20.

Burrow nearly completed a red zone touchdown pass to Edwards-Helaire in the first quarter of the spring game, when Edwards-Helaire got matched up with Anthony again and almost caught the pass near the pylon.

"It's not just power (anymore)," Edwards-Helaire said. "We still can throw the ball in the red zone, and that's the great thing about this offense because it's so unpredictable. Even as a player and a starter on the offense, you can look to the sideline and always wonder, 'OK, I wonder what we're about to run.'"

LSU moved back outside under clear skies for its fourth day of preseason football practice indoors on Monday afternoon, and there were some no…