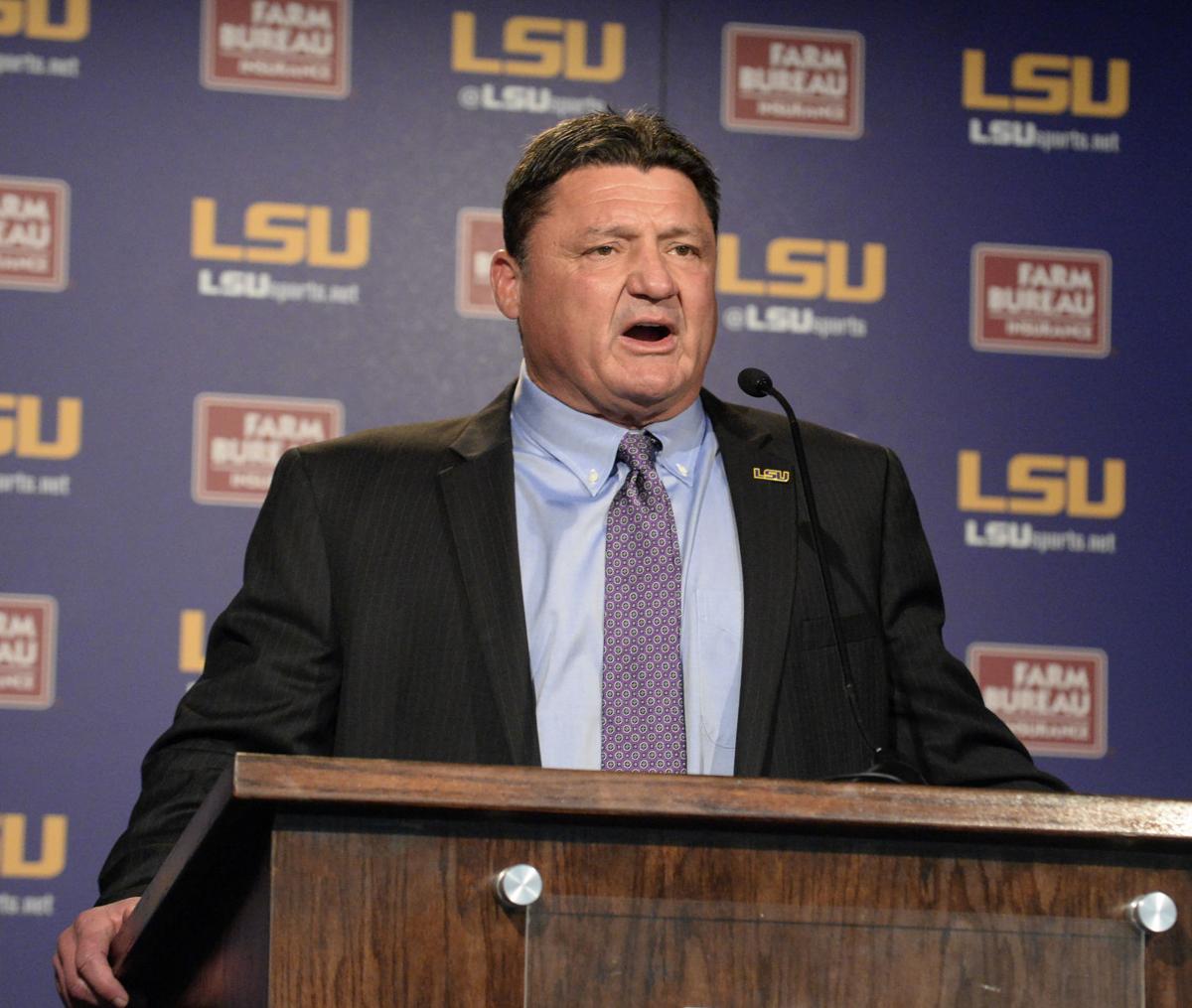 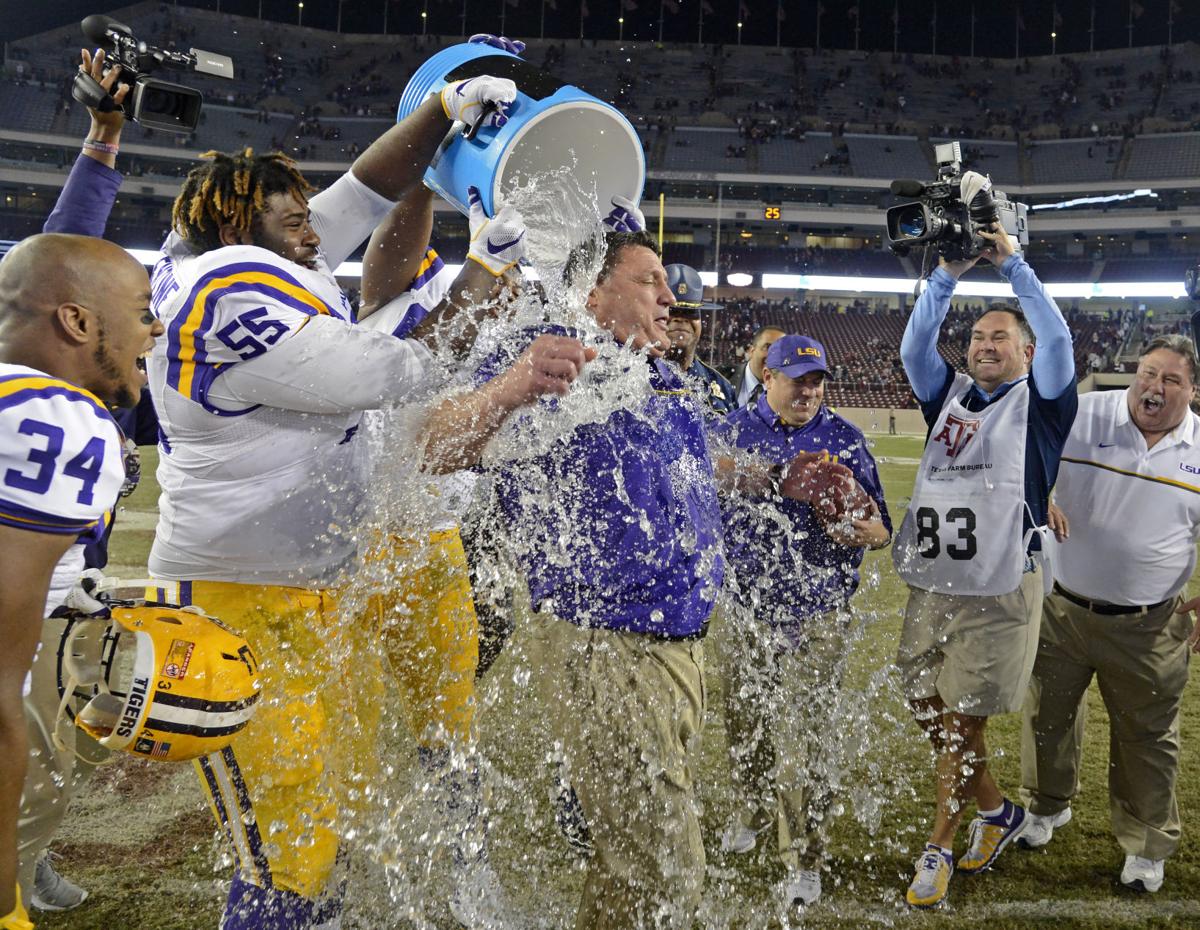 Still LSU's interim head coach then, Ed Orgeron gets a taste of victory (and an ice cold shower) from his players following the Tigers' 54-39 win over Texas A&M on Nov. 24 in College Station, Texas. 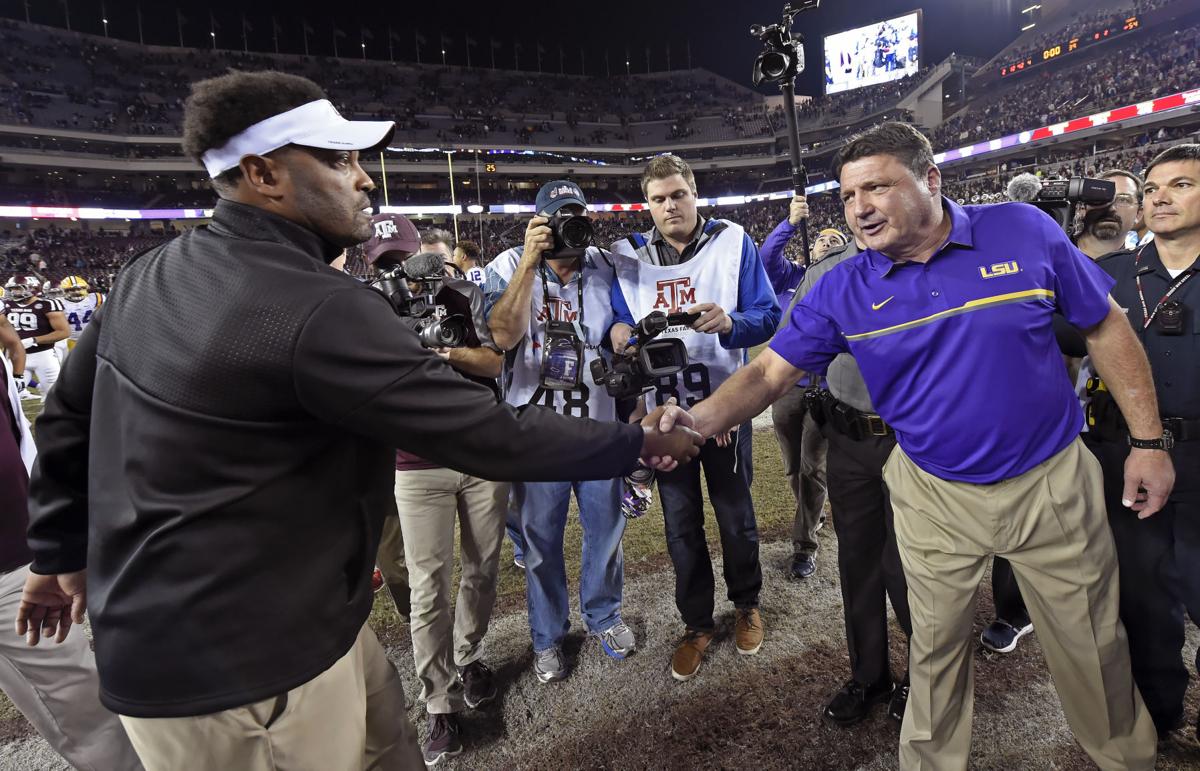 Still LSU's interim head coach then, Ed Orgeron gets a taste of victory (and an ice cold shower) from his players following the Tigers' 54-39 win over Texas A&M on Nov. 24 in College Station, Texas.

Ed Orgeron sped west down Interstate 12 toward Baton Rouge, blaring loud music and shouting in his thick Cajun accent out of the open driver’s side window.

How else did you expect this football coaching search to end?

In an emotional and celebratory news conference Saturday, LSU introduced Orgeron, the Louisiana native, as the football coach at the state’s flagship school. The Tigers promoted the 55-year-old Larose man from interim coach to full-time leader, a move many perceived as an upset.

Orgeron, a barrel-chested, fiery Cajun, saw it as something else: a dream come true.

Orgeron becomes the 33rd coach in program history, and he replaces Les Miles, who won more than 76 percent of his games (the best mark in school history), a national title and two Southeastern Conference championships.

Orgeron, a one-time LSU walk-on and a Northwestern State graduate, isn’t backing down. And he’s not afraid to pick a fight with rival Alabama, which has beaten the Tigers six straight times.

“My goal is to build a championship program fast — very fast,” he said.

“You are judged by that game,” Orgeron said of the Crimson Tide. “That's the nature of the beast. I welcome it. I bring it on. I can't wait till the day we beat those guys.”

Orgeron agreed to a five-year contract, a source told The Advocate, that is expected to pay him around $3.5 million per year, with a heavy incentive bonus structure.

“We've got our man,” athletic director Joe Alleva said, “and he's been here all along.”

LSU's search committee consisted of Alleva, school president F. King Alexander and three members of the LSU Board of Supervisors: Blake Chatelain, Stephen Perry and Scott Ballard. They finalized the deal with Orgeron in a meeting at 7:30 a.m. Saturday, about two hours after Alleva phoned the coach informing him to drive from his Mandeville home to Baton Rouge for the meeting.

Alleva did not tell him of the committee’s decision during the call, but Orgeron assumed it was good news.

“I was going very fast,” he said of the 70-mile trek. “I was listening to some of my greatest music. I had the window down, hollering half the way. I'm glad I didn't get stopped (by police).”

Orgeron's family still holds a permanent residence in Mandeville, and he spent Friday night there for the first time in weeks. He and wife Kelly stayed at the Cook Hotel on LSU's campus during the season.

Orgeron called his wife during the drive and told her, “I don’t think they’re bringing me in to tell me I don’t have the job.”

The hire sent waves through college and professional football and beyond.

Gov. John Bel Edwards may have said it best in a statement to The Advocate: “Coach Orgeron was born to coach at LSU.”

Even Miles weighed in, congratulating his replacement in a statement to The Advocate: "I'm pleased the administration hired within our team. I'm happy for our players and the entire LSU community. Congratulations Ed Orgeron!!"

Orgeron received this third crack at a head coaching job by convincing committee members over the past eight weeks that he’s capable of turning the Tigers back into title contenders. LSU was 13-11 in Miles’ final 24 games against "Power Five" conference teams, and the Tigers, ranked No. 5 in the preseason, slipped to a 2-2 record to begin the year before university leaders fired Miles and offensive coordinator Cam Cameron in September.

Orgeron finished 5-2 in the interim role, getting two bounce-back road wins that ultimately swayed committee members: a 38-10 victory at Arkansas after a 10-0 loss against Alabama and Thursday night’s 54-39 win at Texas A&M following a 16-10 loss to Florida.

“Our kids have in their mind from the minute they come here that they want to be playing for championships,” Alleva said. “When those dreams are not there anymore, to be able to motivate those young men to play at that level, he has that quality to be able to do that. That’s special.”

Equipped with two thick binders detailing his long-term plans, Orgeron met with Alleva and committee members Friday morning to outline coaching staff adjustments, including the hiring of a proven and successful offensive coordinator. The Advocate has learned that Orgeron will first go after Alabama's Lane Kiffin, a friend and former co-worker of Orgeron's.

“I’m telling you, the names we’re talking about are phenomenal,” Alleva said, without mentioning Kiffin. “You put that combination together. I think (Orgeron is) the best situation for us at LSU, and there’s no doubt in my mind. He’s going to hit the ground running.”

The school expects to keep defensive coordinator Dave Aranda and has proposed a new contract to the assistant that could be finalized soon, a source told The Advocate.

Orgeron wowed the committee Friday, looking nothing like the beleaguered coach whom Ole Miss fired nine years ago. In three seasons with the Rebels, Orgeron won just three SEC games out of 24 and finished 10-25 overall.

Included in his regrets in Oxford: treating all of his players and staff members as if they were Warren Sapp, the defensive stud he coached as an assistant at Miami; banging a bass drum walking up and down the hallways while his assistant coaches were trying to work; meddling with position groups (like quarterback) that he knew nothing about; and forcing offensive coordinator Noel Mazzone to run the Southern California offense, which he wasn't familiar with.

“There will be some critics that say, ‘Oh, look at his record at Ole Miss,’ ” Alleva said. “You know what? That was a long time ago. In this world, people learn more from their mistakes and their failures than they do from their successes.”

The gravel-voiced Lafourche Parish native was brought to tears Saturday when mentioning his mother, Coco, and his deceased father. He broke from the emotional spell by talking about none other than his true strength: recruiting.

“We have a team meeting on Monday,” he said. “Going out recruiting (later Monday). Called my recruits today. A lot of them are excited that I'm the head coach.”

He came up short in this exact scenario three years ago. Orgeron finished 6-2 as interim coach at Southern Cal after Kiffin was fired, and he didn’t even get an interview for the full-time job.

He attempted to win over fans — and score more points — by opening up the offense a bit, featuring more of a balanced attack and using tight ends more in the passing game. Orgeron — Bébé, as his friends call him — also earned favor by allowing ex-players to watch practice and participate in the "Tiger Walk" on game day. His transparency with the media and decision to open up portions of practice to reporters were welcomed changes from his predecessor.

And it all led to that phone call from Alleva at 5:30 a.m. Saturday — one that he missed, actually.

“I called right back,” a smiling Orgeron said.

It's Coach O: How do you feel about LSU's decision to hire Ed Orgeron?

After days (months really) of scrutiny, Ed Orgeron appears to be the man set to lead LSU next year and beyond.

LSU and coach Ed Orgeron: The only thing that didn't fit was the word 'interim'

Take the word “interim” off Ed Orgeron’s title, tear it up into little pieces and cast it on the November wind, preferably a wind blowing towa…

Ed Orgeron had already gained the approval of LSU's brass — now he's got Louisiana's governor in his corner.

With much to prove and a checkered coaching past, LSU's Ed Orgeron has work to do to boost his middling standing in the coaching rankings — an…

Pete and Jimmy: LSU's Ed Orgeron draws from his mentors to build a champion