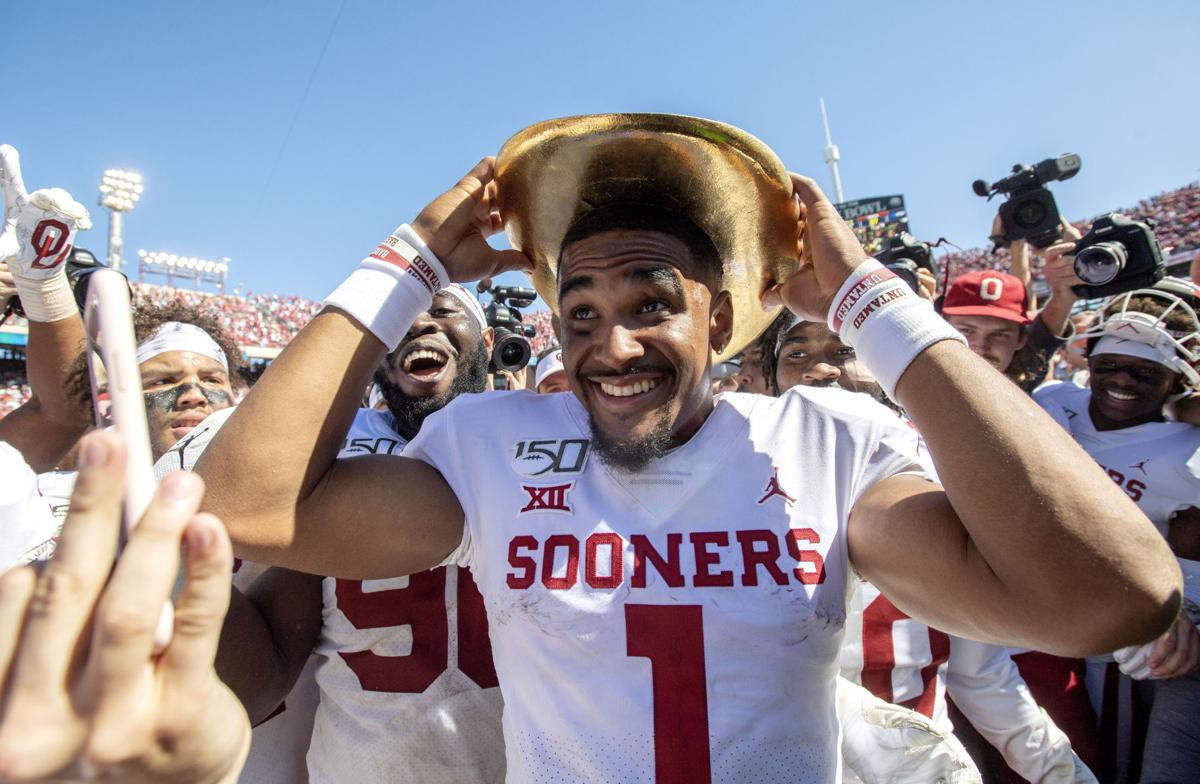 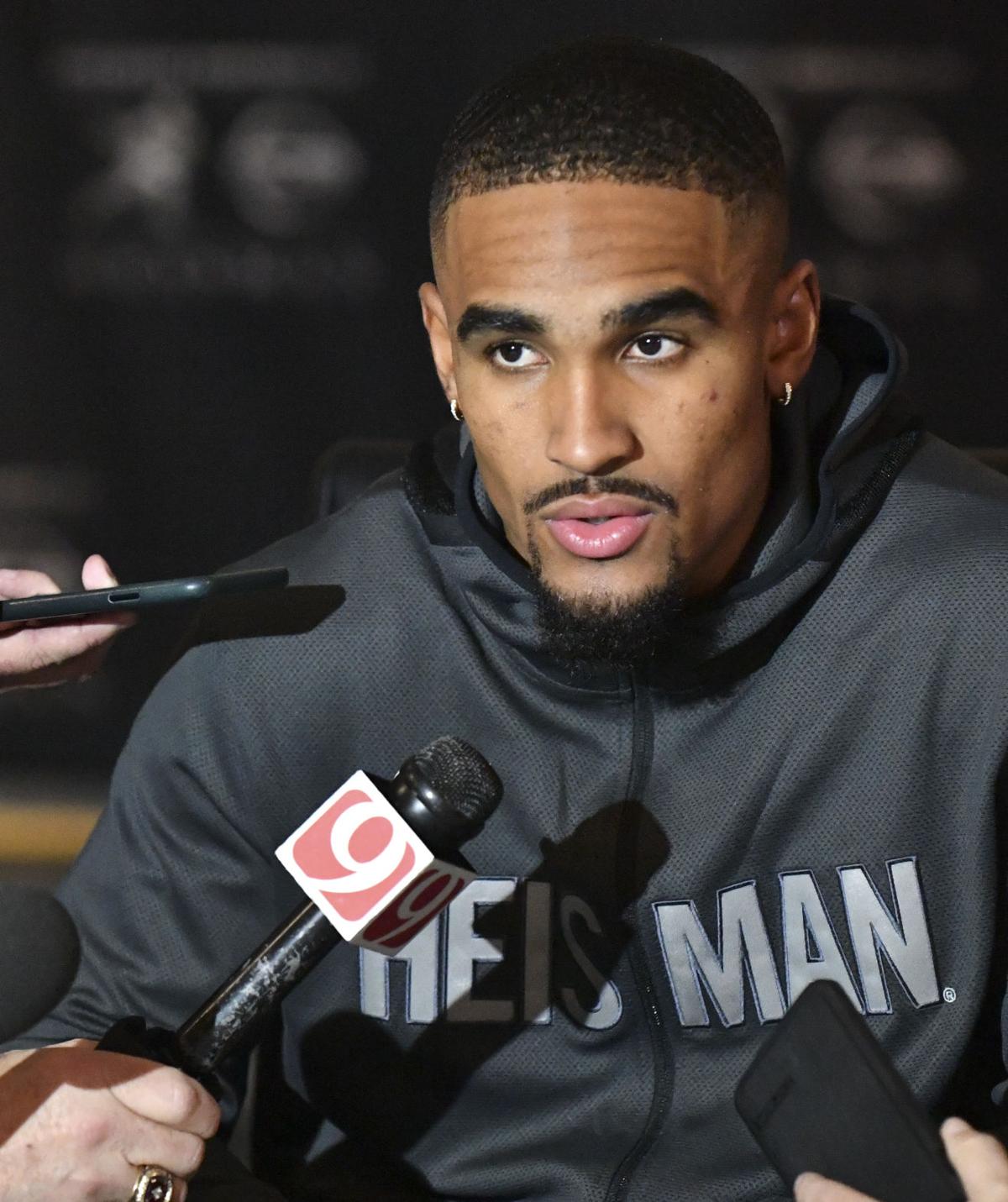 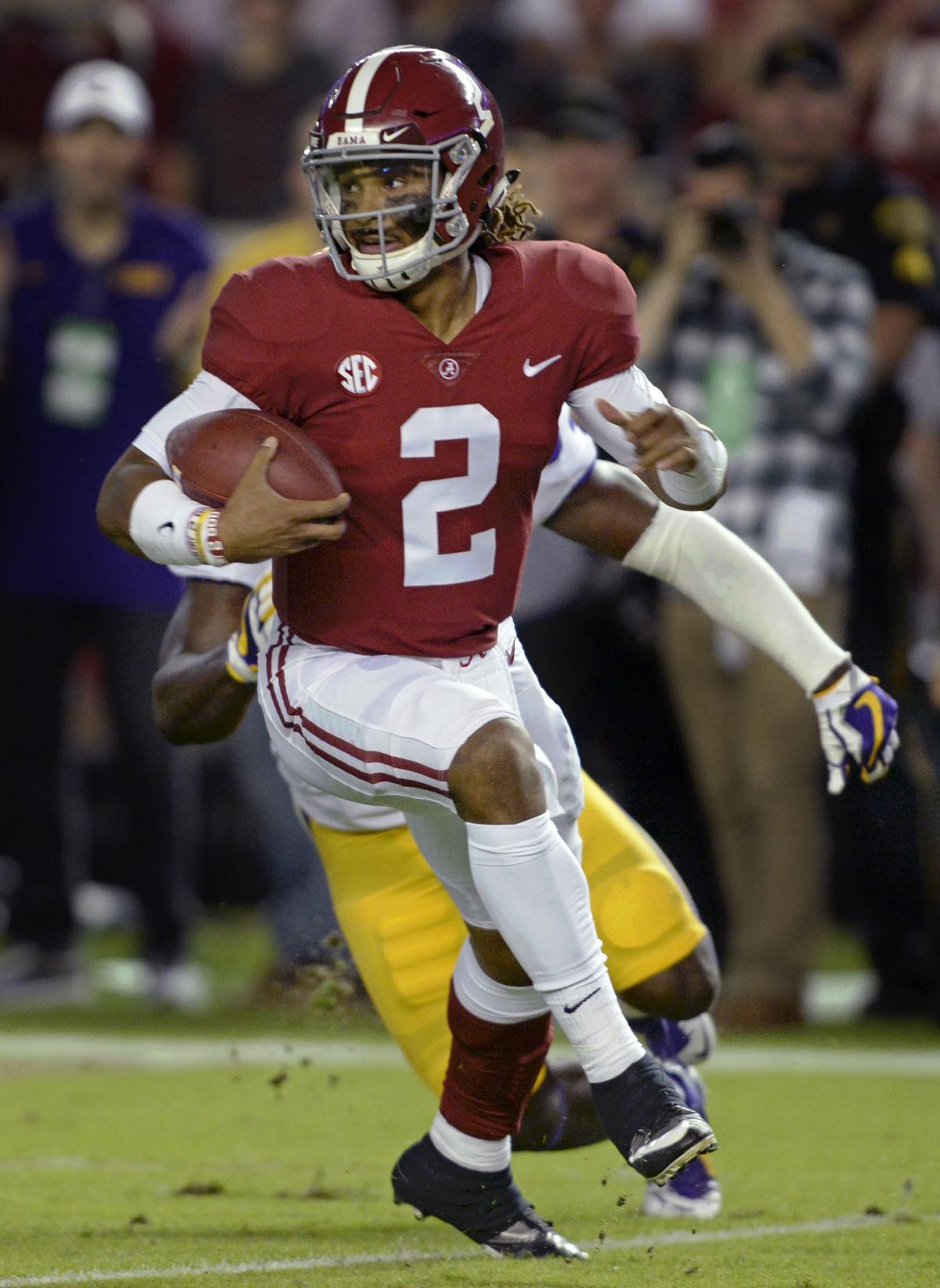 Alabama quarterback Jalen Hurts (2) scrambles away from the pressure during the first half of LSU's football game against Alabama at Bryant-Denny Stadium Saturday Nov. 4, 2017, in Tuscaloosa, Ala. Bama won 24-10.

Alabama quarterback Jalen Hurts (2) scrambles away from the pressure during the first half of LSU's football game against Alabama at Bryant-Denny Stadium Saturday Nov. 4, 2017, in Tuscaloosa, Ala. Bama won 24-10.

ATLANTA — For a program and a team that likes to trade on its real and perceived slights and disrespect cards for motivation, the LSU Tigers find themselves in a most unusual position going into Saturday’s CFP semifinal in the Peach Bowl given the opponent and circumstances.

It’s the position of being the overwhelming favorite.

The questionable tensile strength tailback Clyde Edwards-Helaire’s hamstring hasn’t stopped No. 1-seeded LSU from being a consensus two-touchdown favorite over No. 4 Oklahoma, a staggering number considering these are two of the top four teams still going along with No. 2 Ohio State and No. 3 Clemson in the Fiesta Bowl. Couple that with the tug of history that tells us the past three times the national championship has been decided in New Orleans, the Tigers have been there playing for it. Another title-tinged trip down I-10 almost seems like manifest destiny for LSU at this point.

But thoughts of Peachy victory celebrations and dreams of extravagant pregame dinner parties in the French Quarter before the CFP National Championship Game are given a cold shudder by one name on the Oklahoma roster:

ATLANTA — Going into spring drills, LSU and Oklahoma both knew something had to change for them to take that next step with the nation’s elite…

The Sooners quarterback has taken any and all questions about his days at Alabama before transferring to OU this season and swatted them back across the net like a sizzling Rafael Nadal forehand. It’s not that he is down on the Crimson Tide. Far from it. He took pains Tuesday to thank the Bama and OU fan bases for their support during his two-chaptered college career.

But specific plays or moments? Hurts wanted no part of those. A question about his 21-yard touchdown run early in the fourth quarter of the 2016 game at LSU that led Alabama to a 10-0 victory drew only a blank stare from the Sooners senior.

“What do you want me to tell you?” he deadpanned back.

What do you remember about it, was the follow-up question, like LSU that night hopeful but already circling the drain of defeat.

“Winning the game,” Hurts replied again, with a face that didn’t unmask whether he was holding three kings or nothing better than a 10 high.

Well, LSU fans remember. They remember that 2016 game that resembled the back-and-forth defensive sumo match that was the Tigers’ 2011 9-6 win in Tuscaloosa — at least until Hurts cracked Dave Aranda’s defensive code. They remember the 2017 game at Bryant-Denny, a 24-10 Bama victory in which Hurts was the Crimson Tide’s top passer and rusher, scoring a touchdown both ways.

Hurts had been superseded by Tua Tagovailoa by the time Bama rolled back around to stomp LSU 29-0 in 2018, but his reputation — that of Tiger killer — was still indelibly stamped.

It is that reputation that he takes into this game with LSU this time. If you have tickets to the Peach Bowl, watch you don’t let your sweaty palms rub the bar code off them.

OU's Alex Grinch has fun with unusual name, but 'Christmas Vacation' is his favorite holiday movie

While LSU quarterback Joe Burrow was completely deserving of this year’s Heisman Trophy for the record-breaking season he’s had — it’s a safe bet he soars past 5,000 yards and 50 touchdowns passing before this game is over — Hurts is already there in terms of total offense. He’s thrown for 3,634 yards and 32 touchdowns and rushed for 1,255 yards and 18 more scores. Numbers that in a lot of otherwise Burrow-less years would have made him yet another in a long line of Heisman-winning Sooners quarterbacks. The only disturbing numbers from an Oklahoma perspective are those indicating Hurts’ propensity for turning the ball over: seven interceptions and six lost fumbles.

Edwards-Helaire or no, LSU is the superior team. Especially when you factor in critical defensive losses for Oklahoma like safety Delarrin Turner-Yell — its second-leading tackler is believed to have suffered a broken collarbone in pre-Peach practices back in Norman — and suspended defensive end Ronnie Perkins, its top pass rusher with six sacks.

But an elite quarterback can carry a team far. Elite quarterbacks like Burrow and Hurts, along with Ohio State’s Justin Fields and Clemson’s Trevor Lawrence. They can even cover up any lopsided disparities. And when you pair a quarterback like Hurts with a receiver like CeeDee Lamb, who shared first-team AP All-American honors with LSU’s Biletnikoff Award winner Ja’Marr Chase? Well, you can understand if LSU coach Ed Orgeron has had some sleepless nights since the bowl parings were announced on Dec. 8.

"Here's what happens," Orgeron said. "You have CeeDee Lamb out there. You leave him one-on-one, you've got to win it. Then you double-cover him or you put a safety out there, then you don't have enough people to stop Jalen in the box. That's the game. That is the game the whole way."

Aranda, LSU’s defensive coordinator, sees plenty of danger in Oklahoma’s complex offense with a veteran like Hurts running it.

“We’ve got quarterback runs and speed shot throws and we’ve got looky passes off of run actions,” Aranda said. “It’s a triple option offense kind of wrapped up in a spread packaging. So it’s a whole bunch for us to digest.

“We’re trying to take it bite by bite.”

Keeping Oklahoma from winning Saturday means keeping Hurts from taking a bite out of the LSU offense like in years past. He will no doubt get his points and yards, but he can’t go supernova on the Tigers.

In short, the Tigers have to set a successful trap for the hunter and not the other way around.

ATLANTA — LSU quarterback Joe Burrow said he didn’t expect when he mentioned the poverty rate in his native Athens, Ohio, during his Heisman T…