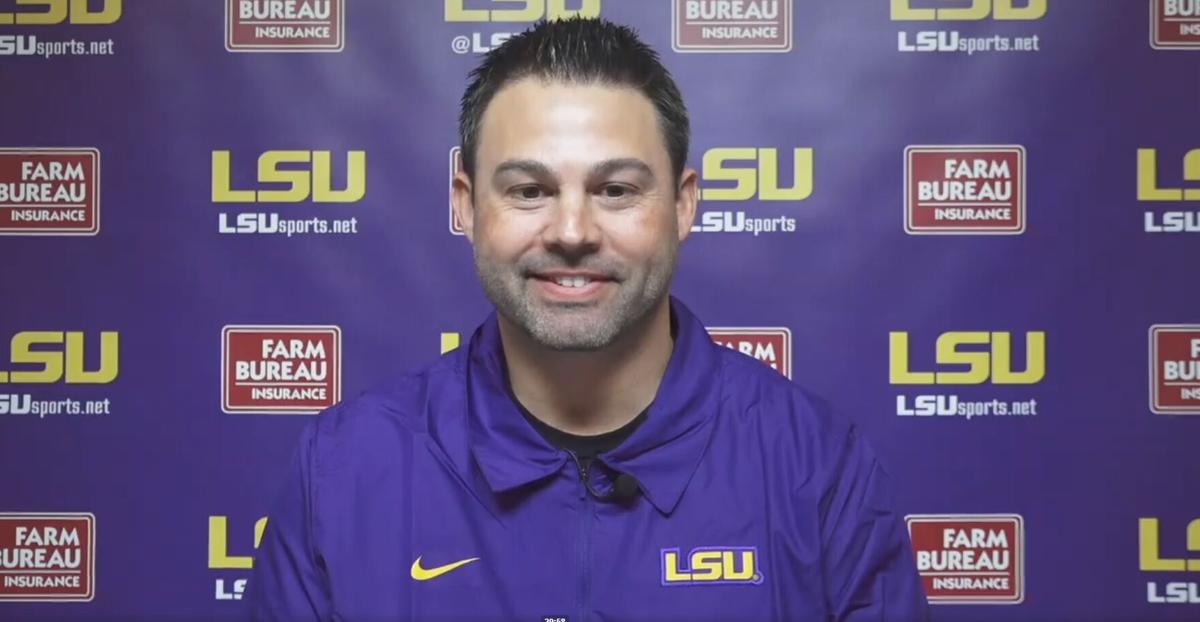 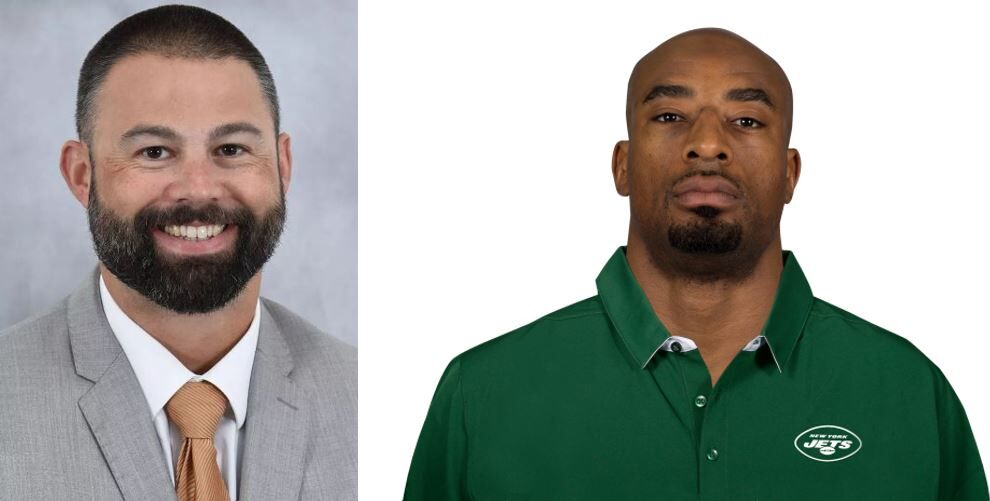 Blake Baker was formally introduced as LSU's new linebackers coach on Tuesday, just under a week since the 38-year-old assistant agreed to a two-year deal that pays him $500,000 in his first season, $550,000 in his second.

Baker came to LSU after two seasons as Miami's defensive coordinator, a tenure that saw a productive 2019 unit regress during the 2020 season. Baker said he "absolutely" could have stayed on as Miami's coordinator, adding that LSU was the "only job I would've left Miami for."

His wife, Roslyn, is a former All-SEC soccer player at LSU, and they both have family throughout the state. Baker, a Texas native, was a linebacker at Tulane from 2000 to 2004 and was Louisiana Tech's defensive coordinator from 2015 to 2018.

The transcript of Baker's full interview is below (questions are in bold and italicized):

“I just want to thank everybody for having me today. Obviously have to thank the administration here and Coach O and everyone that played a vital role in getting me here to Baton Rouge. Couldn’t be more excited to be here. Fired up to be sitting here in this chair in front of you guys today. Ready and willing to answer any questions you might have.”

The linebacker position at LSU this past year has underachieved. When you look at what you’ve got walking into this job, how excited are you to work with some of those guys and have them reach their potential?

“I’m really excited. I had one opportunity so far to kind of just see them move around. I think there’s really the opportunity to work with a bunch of talent, a lot of youth. Sometimes that’s good. Sometimes that’s bad. The one thing I like about young players is a lot of them haven’t created a lot of bad habits. Kind of like dealing with a fresh pound of Play-Doh a little bit. So I’m excited to get the opportunity. Today will be the first time we all get to be hands on and work on the grass with them.”

How excited are you to put on an LSU polo and recruit Louisiana, Texas and the Houston area?

“I’m really excited about it. Obviously having this logo and shirt, it just means more. So when you walk into a school, especially in the state of Louisiana and a city like Houston with so much talent, kids will perk up when you walk through the door. Hopefully, it’s a lot easier than it was being thousands of miles away or even at a smaller school. So I’m excited about the opportunity. I absolutely love coaching kids from Louisiana. They just have an inherent toughness about ‘em. You know? They like to work. You can’t ask them to do it enough. Those guys, they’re blue-collar and they have a business-like approach to this game, so they’re fun to coach.”

What do you look for specifically with linebackers you want?

“That’s a good question. I think it’s really evolved. The first thing I always want to look for is toughness. Are they tough? You want ‘em to have good length, good speed. They have to be able to play in space, the ability to make open-field tackles. Then, high-character guys. I really believe that if a guy is willing to come in and work and take care of his business, he’s going to be a really great player one day.”

Ed Orgeron talked about how you can help Daronte Jones support this defense. What’s your plan with him and what do you see this vision of LSU football moving forward?

“I talked to Daronte right when I accepted the job, and I’m here to be a sounding board for him. I’m not here to be the defensive coordinator. I wanted him to know that up front. I guess he had done a little research on me and felt comfortable with me as well. I’ll tell you, the last couple of days spending time with that guy—I think we’re going to gel really well together. We’ve been out to lunch and kind of just got to know each other. I think our personalities really gel well together. I told him: I’m here to help. I know the pro game’s probably a little different from the college game. If I do make a suggestion, it’s out of a good place. We’re all trying to win games here. He’s a low-ego, high-output guy—much like myself. I don’t think it’ll be an issue. I’m fired up to work for a really, really sharp (coach who) knows his stuff and, like I said, (is) just fun to be around.”

Most of the time you move it’s a real transition. But with your wife being from Mandeville (Roslyn, a former All-SEC soccer player at LSU), I imagine this wasn’t a hard sell for the family.

“I’ll be honest with you: I wasn’t looking to leave Miami. And this is probably—well it is—the only job I would’ve left Miami for. The ability for my wife to be so close to home—we’ve got three kids: (age) 6, 3 and 1. So, bless her heart. She’s the real MVP. I don’t know how she does it. Being able to be close to home. A lot of her best friends still live between here, Mandeville and Lafayette. I have a lot of family in Covington, Madisonville, Mandeville. So it’s a dream come true to be able to come home and have the support that we have. When I told her, she was crying tears of joy to be able to do that. And the old saying: happy wife, happy life. We’re fired up to be here.”

Ed Orgeron noted your ability to connect with players. How do you approach building relationships with these guys?

“See, this is what you have to do first and foremost: Without trust, there is no relationship. A coach told me a long time ago that a kid doesn’t care how much you know until they know how much you care. And I’ve really followed that philosophy my entire coaching career. I’ve already called and had conversations with all the linebackers and let them know I’m going to make them a better player, but I’m also going to make them a better person. And that just comes from spending time together. Having them come over to the house, being around me and my family, seeing how I interact with my wife and my kids. And hopefully we can portray a father-figure mentality to some of these guys.”

Are you going to be recruiting north Louisiana, where you used to coach at Louisiana Tech? And could you have stayed at Miami as defensive coordinator?

“Yes, absolutely I could have stayed at Miami as defensive coordinator, and, you know, Coach Diaz and I had conversations about when this came up. Like I said, there wasn’t going to be another place I would’ve left Miami for. As far as the recruiting, we really haven’t sat down and talked about areas. I’ve recruited Shreveport. I’ve really recruited all of Louisiana. Houston. Wherever I can help the staff be most valuable, that’s where I’ll be put.”

Hey Blake, I enjoyed talking to your brother Beau (former Texas offensive lineman). You seem passionate about your high school days (at Clear Lake High in Houston). Beau said you were more likely to go to NASA than the NFL. You had a lot of talent, but you shocked this team in the playoffs. You had never kicked before, but they let you kick the game-winning extra point and everything. What can you recall about that game and your spirit as an undersized linebacker at Tulane?

“I think I always had a passion for the game, probably had a chip on my shoulder. Just being undersized and doubted my entire career. That game specifically, I think it was the first round of the playoffs against North Shore. I think they signed 17 Division I players off that team, and I think we had maybe five or six. Yeah, our kicker, he hadn’t made the grades. So we had kicking tryouts I think on that Monday or Tuesday, and I ended up being the kicker. Long story short, we were down 21, and I was such a bad kicker, I accidentally kicked a squib kick off of their front line, and we recovered it and kind of got us going. Ended up coming back and kicking the game-winning extra point at the last minute. Something you’ll never forget, but I’ve always had a passion for the game. My mom always used to think I would be an agent or a coach or something. I’d watch re-runs of SportsCenter from 6 in the morning to 6 at night. I could memorize the whole show by the end of the day. It’s always been something I’ve been passionate is sports, especially football.”

During his introductory press conference, new LSU defensive coordinator Daronte Jones discussed his scheme and vision for the defense, as well as his personal ties to Louisiana and coaching philosophies.