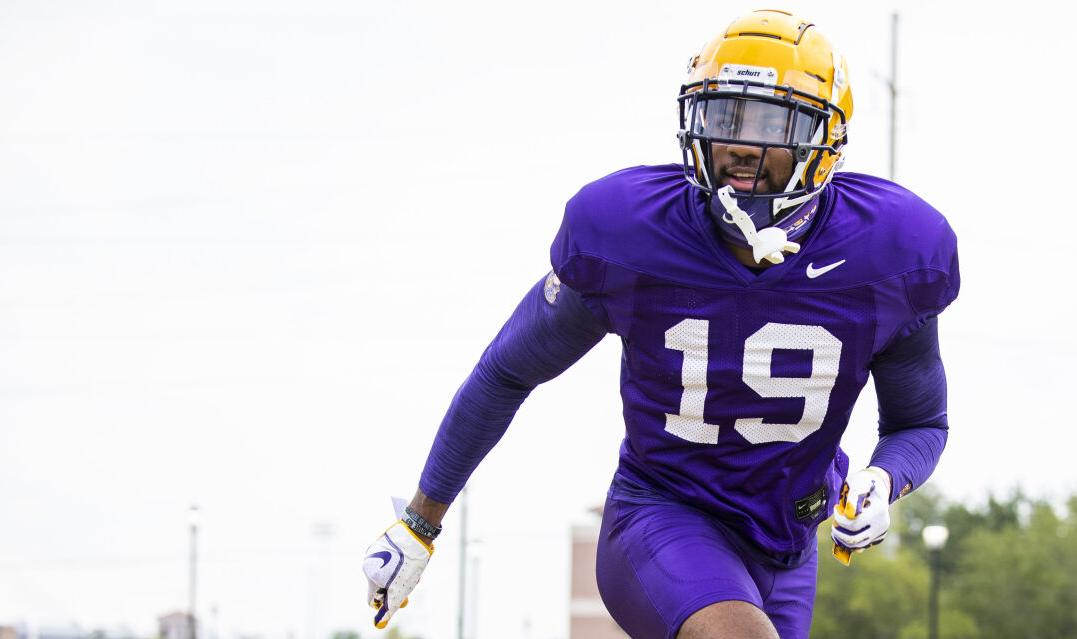 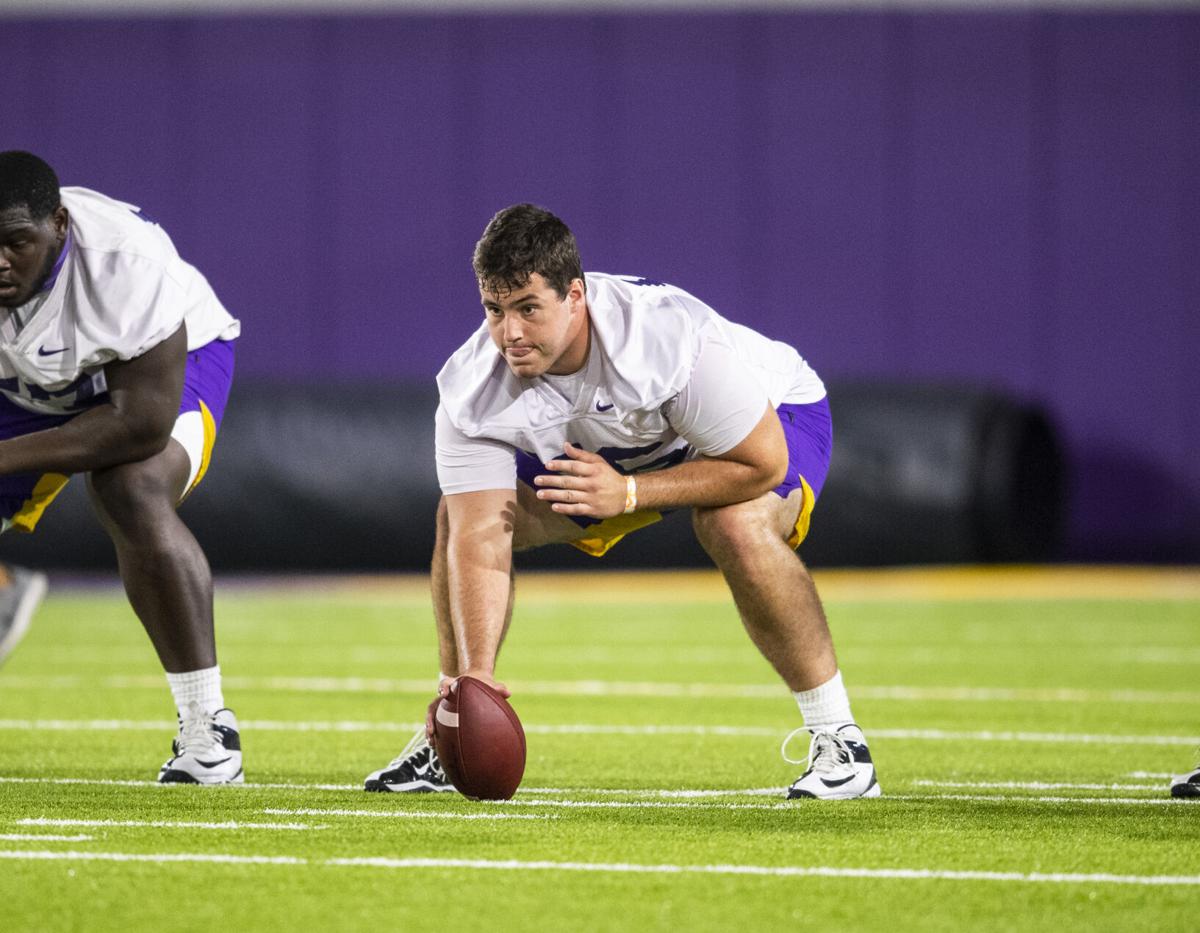 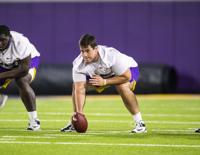 Center Liam Shanahan prepares to snap a football at LSU practice on Sept. 7.

Center Liam Shanahan prepares to snap a football at LSU practice on Sept. 7.

At his first preseason practice in 2018, Cole Tracy looked for his name among a seating chart. LSU organized its team meeting room by class, placing seniors in the front and freshmen in the back.

Tracy, a 5-foot-11, 188-pound kicker, found his name located in the middle of the front row. He sat between offensive lineman Garrett Brumfield and running back Nick Brossette, two seniors.

“Hey, pal,” Tracy recalled Brumfield saying, “your seat's in the back.”

Brumfield didn’t believe Tracy, telling him again to sit with the rest of the freshmen. Tracy assured Brumfield he was supposed to sit in the front. Brumfield asked for his age. Tracy told him he was 22.

"Oh, sh--!” Tracy recalled Brumfield saying, “You're older than me."

Tracy had transferred from Assumption College, a Division II liberal arts school in Massachusetts with an enrollment of about 2,000 students. After kicking a school-record 68 field goals and receiving his undergraduate degree, Tracy wanted to play major college football with his final year of eligibility.

LSU has been predicted to finish second in the Southeastern Conference Western Division, according to a preseason media poll released Wednesda…

In his lone season at LSU, Tracy kicked a school-record 29 field goals, including one to beat Auburn as time expired, and became a permanent team captain. Joe Burrow also transferred in 2018 after he lost the quarterback competition at Ohio State. He later won the Heisman Trophy, transformed LSU’s program and led the Tigers to an undefeated national championship season.

Tracy and Burrow set a standard for the performance of LSU’s graduate transfers, leaving the school with multiple records and accolades. Now two years after they arrived at LSU, two more graduate transfers — linebacker Jabril Cox and center Liam Shanahan — will start the season-opener Saturday at 2:30 p.m. against Mississippi State.

“We wanted to bring in the best players at LSU as possible,” coach Ed Orgeron said. “If you look at Joe Burrow, if you look at Jabril Cox, Liam Shanahan, Cole Tracy — we've done phenomenal with graduate transfers.”

Transfers must typically sit out a year, but graduate transfers can play immediately without applying for a waiver because they earned their undergraduate degrees. They either take master’s courses, enroll in general coursework or begin a second undergraduate path. Immediate eligibility can make graduate transfers more appealing for a team trying to fill positional holes.

LSU has added transfers to its roster over the years, often recruiting junior college prospects. Two players even transferred from SMU in the 1980s after its football program received the NCAA’s death penalty. But similar to the rest of college football, graduate transfers are a more recent occurrence at LSU.

Meet LSU's BJ Ojulari: grandson of a Nigerian prince, descendant of a king — and a key pass rusher

B.J. Ojulari is the grandson of a Nigerian prince, the descendant of a powerful war chief and king.

After every season, Orgeron and the coaching staff identify personnel needs, listing them on a whiteboard at the football operations building next to rows of recruiting classes. The recruiting department finds available graduate transfers, then coaches research their character and background while evaluating tape. If the coaches believe they have enough talent to contribute, LSU “recruits the heck out of them,” Orgeron said.

When Tracy and Burrow arrived at LSU, the starting quarterback, Danny Etling — himself once a transfer from Purdue — had completed his eligibility, and LSU’s kickers had struggled in 2017. LSU didn’t have players at either position committed in the signing class.

Before LSU began recruiting him, Tracy considered UMass and Oklahoma State. He called Iowa State, too. Its special teams coordinator told Tracy the team didn’t have an available scholarship.

“But I know a guy that's looking specifically for a grad transfer,” Tracy recalled Iowa State’s coach saying. “Let me give him a call.”

Tracy soon heard from LSU special teams coordinator Greg McMahon. Tracy visited LSU a few days before the December early signing period. He felt the appeal of playing in the Southeastern Conference and understood LSU’s history. Tracy knew before he left town he wanted to play his final year at LSU.

LSU has many changes to its game day protocol this year. See them all here.

“From the coaches to the staff to the people at Kolache Kitchen, it's like every single person is trying to get the recruits there,” Tracy said.

Some transfers try to establish themselves as vocal leaders and create friendships the moment they step on campus, but so far, LSU’s have generally kept to themselves until they secured a starting role. Burrow won every rep during 110-yard sprints, remaining quiet until he earned his teammates’ trust. Tracy introduced himself to fellow specialists. Otherwise, he tried to let his performance talk for him.

Cox, who transferred from North Dakota State, chose LSU without visiting campus because of the coronavirus pandemic. Cox barely spoke when he first arrived. Instead, he spent his time studying LSU’s defensive scheme. Cox wanted to focus on becoming a starter in order to prove himself in the SEC. Orgeron has since called him one of LSU’s best players.

This year, after LSU lost four starting offensive linemen and three starting linebackers, the coaching staff identified both positions as places of need during recruiting. One day at 6 a.m., Orgeron walked past offensive line coach James Cregg’s office in the football operations building. Cregg asked him to watch film of Shanahan, a three-year starter at Harvard.

“You think he can play for us?” Orgeron asked.

Cregg said yes, and Shanahan later picked LSU because he wanted to reach the “highest level of college football.” When Shanahan arrived over the summer, LSU inserted him at center, a position he never played at Harvard. He took over the starting role early in preseason camp.

“I trust my coaches,” Orgeron said. “They do a great job of evaluation, and they know what they need at their position.”

Around noon last Saturday, the day after LSU’s final scrimmage, Tracy called McMahon. They talk occasionally, and Tracy wanted to know more about the team. He asked how Cox and Shanahan played during preseason practice.

McMahon complimented both players, praising their maturity. Cox stood out throughout practice and established himself as a complete linebacker. Shanahan proved he can block interior defenders and lead communication amongst the offensive line. Two more graduate transfers had become integral players on the team.

"Everybody calls it DBU,” Tracy told McMahon, “but I think we're going to have to start calling it Grad Transfer U.”

How does LSU beat Mississippi State? Keys include pressure K.J. Costello and win the run game

LSU hosts Mississippi State in the first weekend of the Southeastern Conference's 10-game, league-only schedule. These are staff writer Wilson Alexander's keys to the game for LSU.