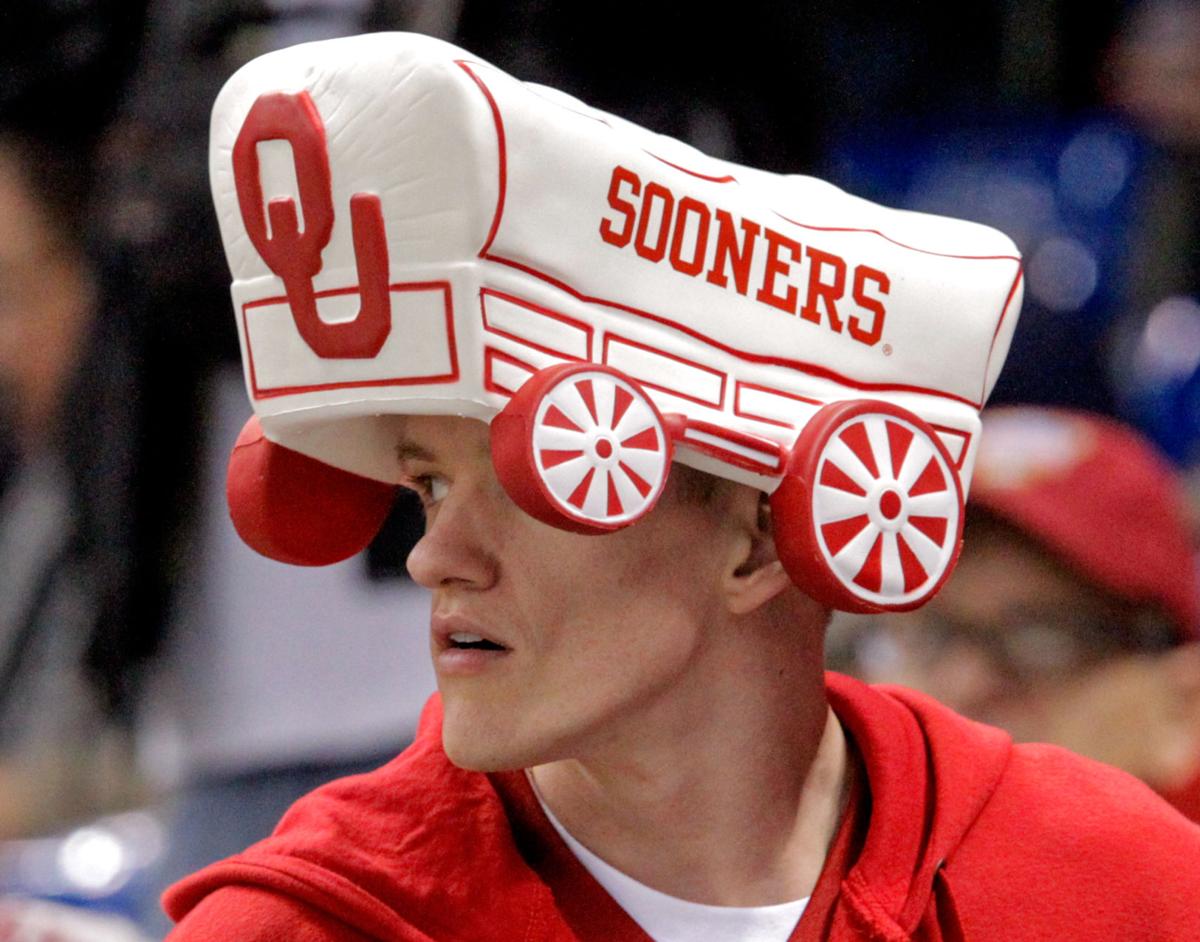 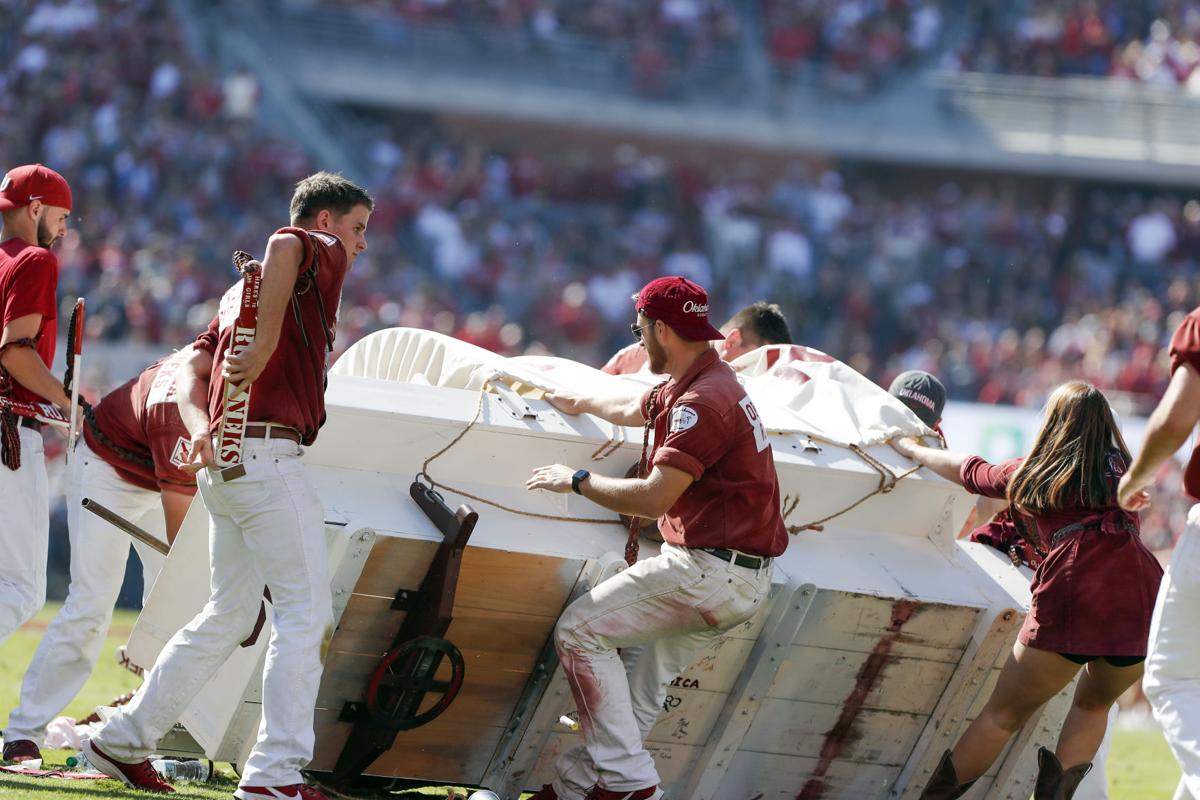 The Oklahoma Sooner Schooner flipped over during a touchdown celebration on the field during the first half of an NCAA college football game against West Virginia in Norman, Okla., Saturday, Oct. 19, 2019. (AP Photo/Alonzo Adams) 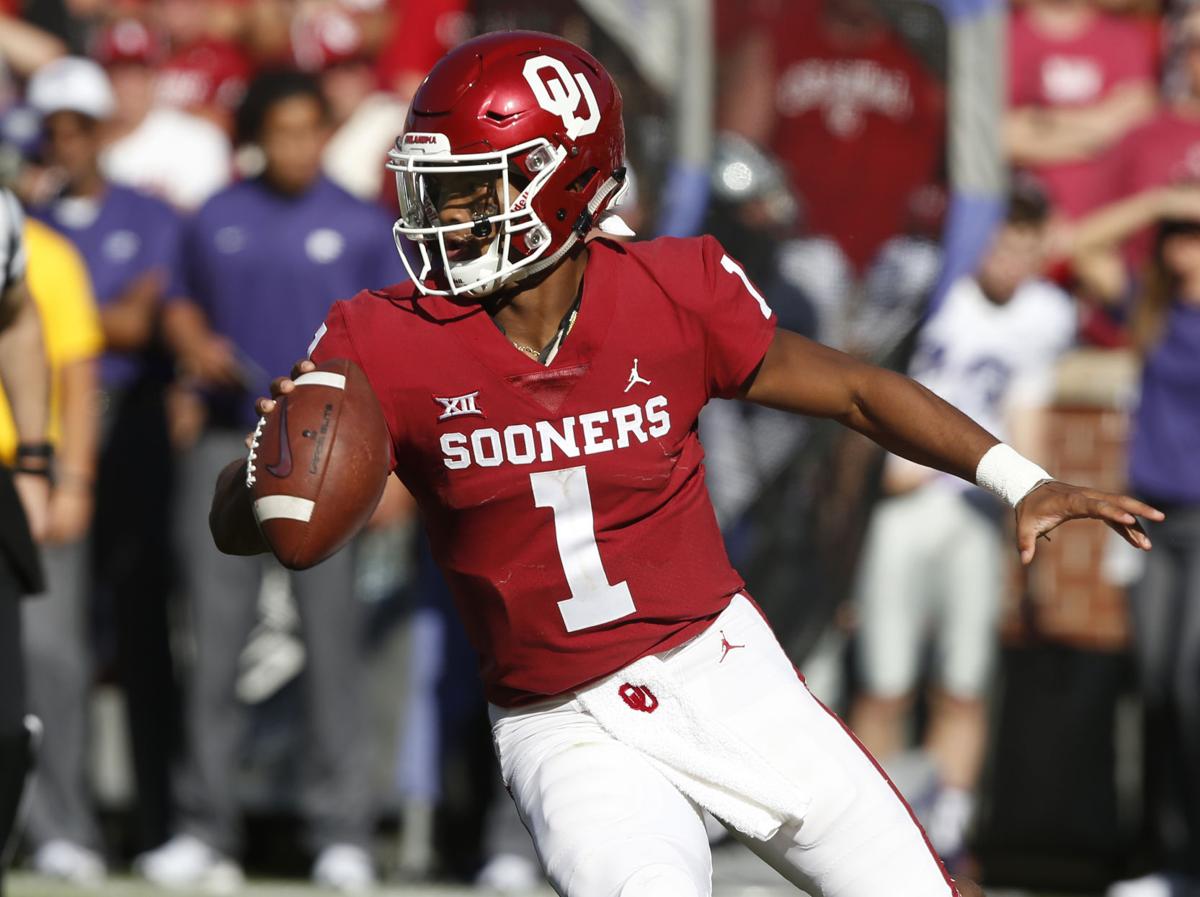 Former Oklahoma quarterback Kyler Murray looks for a receiver Oct. 27, 2018 against Kansas State in Norman, Okla. Murray won the 2018 Heisman Trophy, the record-tying seventh player from OU to do so. 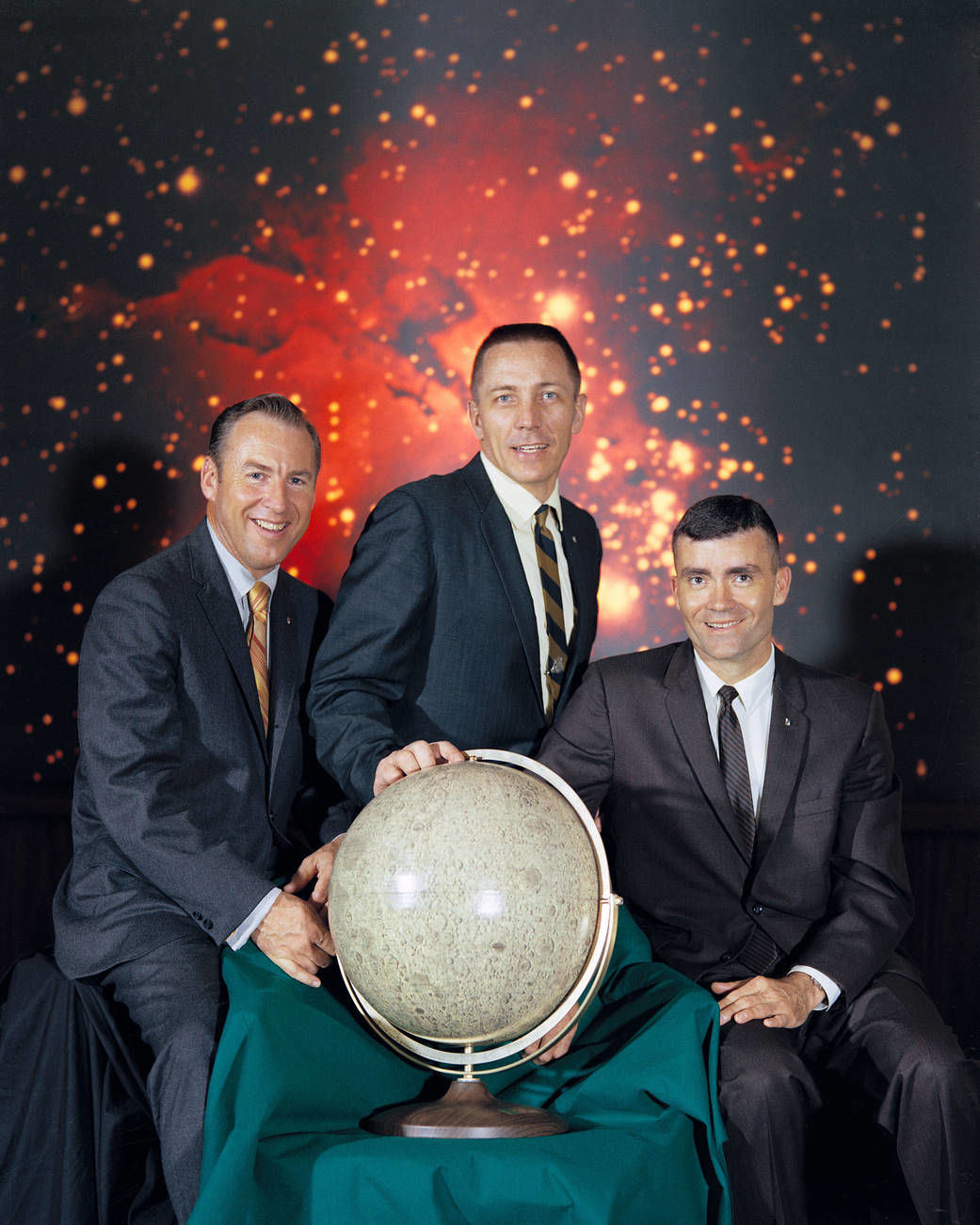 The Oklahoma Sooner Schooner flipped over during a touchdown celebration on the field during the first half of an NCAA college football game against West Virginia in Norman, Okla., Saturday, Oct. 19, 2019. (AP Photo/Alonzo Adams)

Former Oklahoma quarterback Kyler Murray looks for a receiver Oct. 27, 2018 against Kansas State in Norman, Okla. Murray won the 2018 Heisman Trophy, the record-tying seventh player from OU to do so.

For two schools known for their football, LSU and Oklahoma have been mighty infrequent gridiron opponents. Saturday’s Peach Bowl matchup between the Tigers and Sooners in the CFP semifinals will be just the third time they will have met, all in bowl games. Oklahoma beat LSU 35-0 in the 1950 Sugar Bowl, while LSU beat OU 21-14 in the 2004 Sugar Bowl for the 2003 BCS national championship. The two schools are scheduled to play a home-and-home series for the first time: 2027 in Norman and 2028 in Baton Rouge.

What better time, then, for the Tigers and Sooners to get better acquainted? Here’s a look at 10 things to know about Oklahoma and its traditions:

Oklahoma is the joining of two Choctaw Indian words, “okla” and “homma,” meaning “red people.” Several Native American tribal nations were forcibly relocated into what was then called Indian Territory, created in 1830 and comprising basically the eastern third of present-day Oklahoma. After the Civil War, some tribal nations were stripped of part of their territories, which became the Unassigned Lands. Settlers known as Boomers lobbied to settle the Unassigned Lands, which later became the Oklahoma Territory or the western portion of the current state. These became known as the Twin Territories.

The Oklahoma Territory was opened for settlement via several land claim races. The first of these began at noon on April 22, 1889, with 50,000 people poised to pour into the Unassigned Lands to claim their 160 acres. Those who crossed the line early were known as Sooners.

The Twin Territories became the state of Oklahoma in 1907. The University of Oklahoma, founded in 1890, referred to its sports teams as Rough Riders or Boomers until 1908 when they were renamed Sooners. The nickname celebrates the settlers’ “can-do” spirit, not claim jumping.

What Mike the Tiger is to LSU athletics is what the Sooner Schooner is to Oklahoma, a covered Conestoga wagon of the type used in the land rush races. The wagon is pulled by two white ponies named Boomer and Sooner.

The Sooner Schooner made its debut in 1964 at an Oklahoma-Southern California game and is brought out for home games in Norman and bowl games, running across the field after an OU touchdown. On Oct. 19 during a 52-14 win over West Virginia, the wagon flipped on its side taking too sharp a turn, ejecting its two student riders and damaging the wagon. School officials said afterward the Sooner Schooner wouldn’t run again this season but would be on display at games, while a new wagon is built for the 2020 season.

The Ruf/Neks are Oklahoma’s all-male spirit squad. With origins dating back to a 1915 basketball game between OU and rival Oklahoma A&M (now Oklahoma State), the Ruf/Neks drive the Sooner Schooner and carry red and white paddles at games originally intended to intimidate opposing teams. The Ruf/Neks' Lil’ Sis organization began in 1973 as a female counterpart to the all-male spirit group.

The Pride of Oklahoma Marching Band has been mocked for playing the school’s fight song “Boomer Sooner” too often during games, a reported 84 times during OU’s CFP semifinal loss on Jan. 1, 2018 to Georgia in the Rose Bowl.

Here’s the lyrics to the familiar tune. If you watch or attend the Peach Bowl, you’d better get used to it:

And a Sooner bred

And when I die

Joe Burrow capturing the Heisman Trophy on Dec. 14, joining Billy Cannon as the just the second winner from LSU, was a huge milestone for LSU fans.

All told Oklahoma has had seven Heisman winners, tied for the most ever with Notre Dame and Ohio State. Preceding Mayfield and Murray at OU were: Billy Vessels, quarterback, 1952; Steve Owens, quarterback, 1969; Billy Sims, running back, 1978; Jason White, quarterback, 2003; and Sam Bradford, quarterback, 2008. White and the Sooners lost the 2003 BCS national championship to LSU in the 2004 Sugar Bowl.

From 1953-57, the Sooners won 47-straight games, a college football record that still stands to this day.

Almost as remarkable as that winning streak is the fact that it was bookended by losses to Notre Dame. The Fighting Irish beat Oklahoma 28-21 in 1953 and again 7-0 on Nov. 16, 1957 on the Sooners’ home field in Norman. Notre Dame drove 80 yards in 20 plays for the game’s only score, a 3-yard pass from Bob Williams to Dick Lynch. Williams intercepted a pass in the end zone in the final minute to help seal the upset victory.

An Oklahoma campus landmark, legend holds that if you kiss your sweetheart within the circular concrete bench you are destined to be married. First built in 1910, the Spoonholder was dismantled in 1983 because of a campus renovation. But romantic-minded alumni had it rebuilt, including pieces of the original structure, in 1999.

Though Oklahoma’s athletic history is studded with great players, the program missed out on one of the greatest athletes of all time: Mickey Mantle.

The ultimate switch hitter with 536 home runs in his 18 seasons with the New York Yankees, Mantle went on a recruiting trip from his hometown of Commerce, Oklahoma, to Norman in 1949. Future Texas coaching legend Darrell Royal, then an OU player, was his host but didn’t remember him because, as Royal said later, Mantle wasn’t Mantle yet.

“I never thought about playing college football,” Mantle later said. “I don’t think OU was that interested in me. I am not sure they even thought about recruiting me. Bill Moseley, who was the best player on our team, was the guy they wanted. The only reason I agreed to the visit was Moseley wanted me to go with him.” By 1951, Mantle was a starting outfielder for the Yankees on his way to a Hall of Fame career.

Not just an Oklahoma tradition but the rivalry between OU and its in-state nemesis Oklahoma State. The series includes not only football but all sports in which the two schools compete. This year the tally includes showdowns in soccer, men’s and women’s cross country, football, men’s and women’s basketball and wrestling, 12 events in all. So far Oklahoma State leads the 2019-20 Bedlam Series 5-1-1, but Oklahoma did win the big matchup in football, 34-16.