Spring football starts Thursday for LSU with one of its sturdiest footholds in several seasons.

Fresh off the Tigers' 40-32 Fiesta Bowl victory over Central Florida on Jan. 1, Ed Orgeron was moved by optimism.

It's no secret that football is big business in Louisiana.

One of those players to Orgeron's right, Joe Burrow, represents exactly why the coach is so optimistic.

A year ago, the Tigers were still searching for a starting quarterback — a search that continued beyond spring practice until Burrow arrived as a graduate transfer from Ohio State.

And the coaches Orgeron mentioned?

Every assistant coach but passing game coordinator Jerry Sullivan returned, and Sullivan, 74, had fulfilled the one-year, $460,000 contract that was set to expire at the end of January.

Sullivan's vacancy was filled within a month by former New Orleans Saints offensive assistant Joe Brady, 28, who is expected to further advance LSU's offense toward a Run-Pass-Option scheme.

Paired with a 2019 recruiting haul that ranked No. 5 nationally, including top cornerback prospect Derek Stingley, who enrolled early and practiced before the Fiesta Bowl, the Tigers have more promise than concern this spring.

With its biggest bowl victory of the College Football Playoff era, LSU begins the spring with perhaps more promise since it beat then-Big 12 Conference member Texas A&M in the 2010 Cotton Bowl to cap an 11-2 season.

That season created momentum that vaulted the program toward a 13-1 record in 2011.

If you're a Tiger fan you won't want to miss this newsletter. Sign up today.
Photos

LSU football 2019 recruiting class: Get to know the new crop of Tigers

Mainly, the offensive line will need to improve upon a season that had them ranked 106th nationally with 35 sacks allowed; defensive coordinator Dave Aranda will have to make up for the loss of star inside linebacker Devin White; and the defensive line will have to show more muscle, particularly at nose tackle, where a position battle will break out among Breiden Fehoko, Tyler Shelvin and Siaki Ika.

There's also a major question mark at placekicker, where Connor Culp and Jack Gonsoulin — who combined to make 59 percent of their field goals in 2017 — will seek to replace record-holder Cole Tracy before freshman Cade York arrives in June.

Spring football ends with the National L Club spring game at Tiger Stadium at 1 p.m. April 6, bringing an end to the 15 allotted spring practice periods the NCAA allows each team.

LSU football is back! 15 key storylines to watch as spring football begins 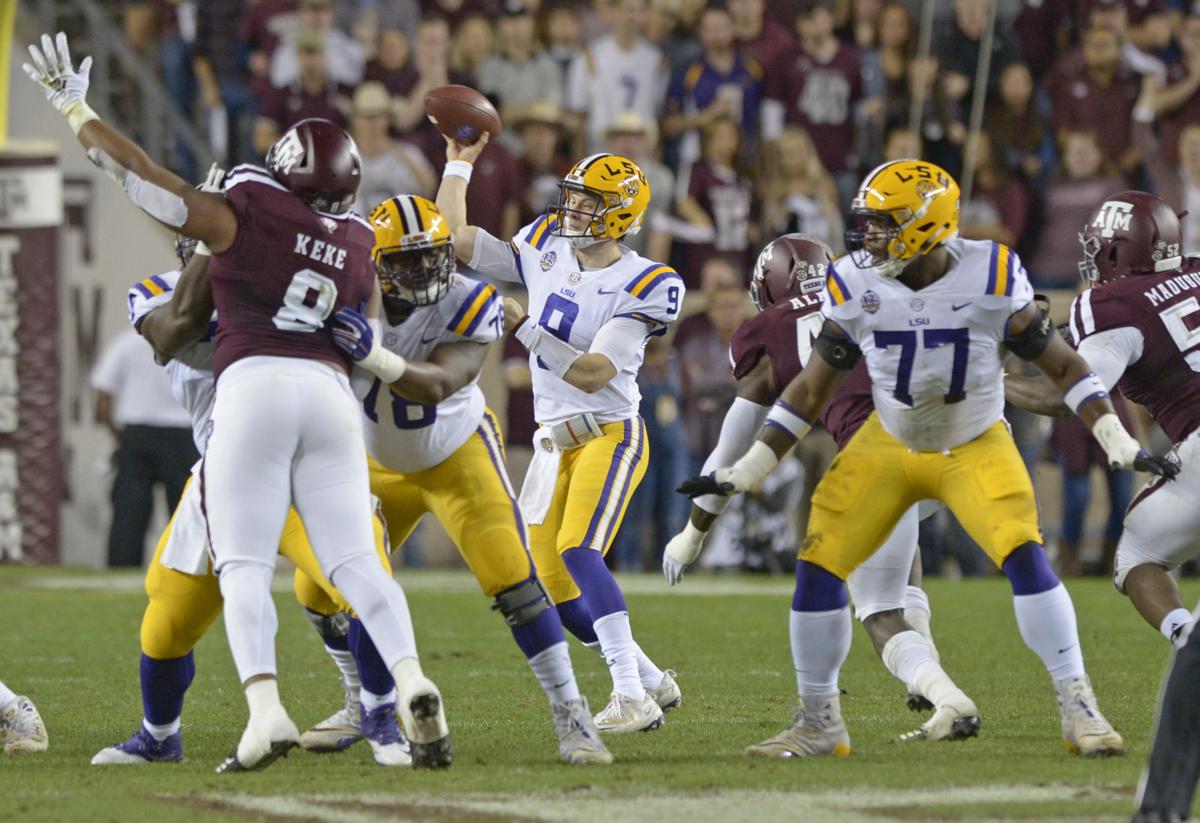 The new offense: The LSU coaching staff began researching the Run-Pass-Option offense last summer when they invited some New Orleans Saints coaches to Baton Rouge for a presentation. Now, Ed Orgeron's hired a Saints assistant, Joe Brady, as LSU's passing game coordinator, and Orgeron says the Tigers have been retooling the offense to be "exactly what I wanted from the get-go." With more depth behind returning starting quarterback Joe Burrow, there could also be more quarterback runs. 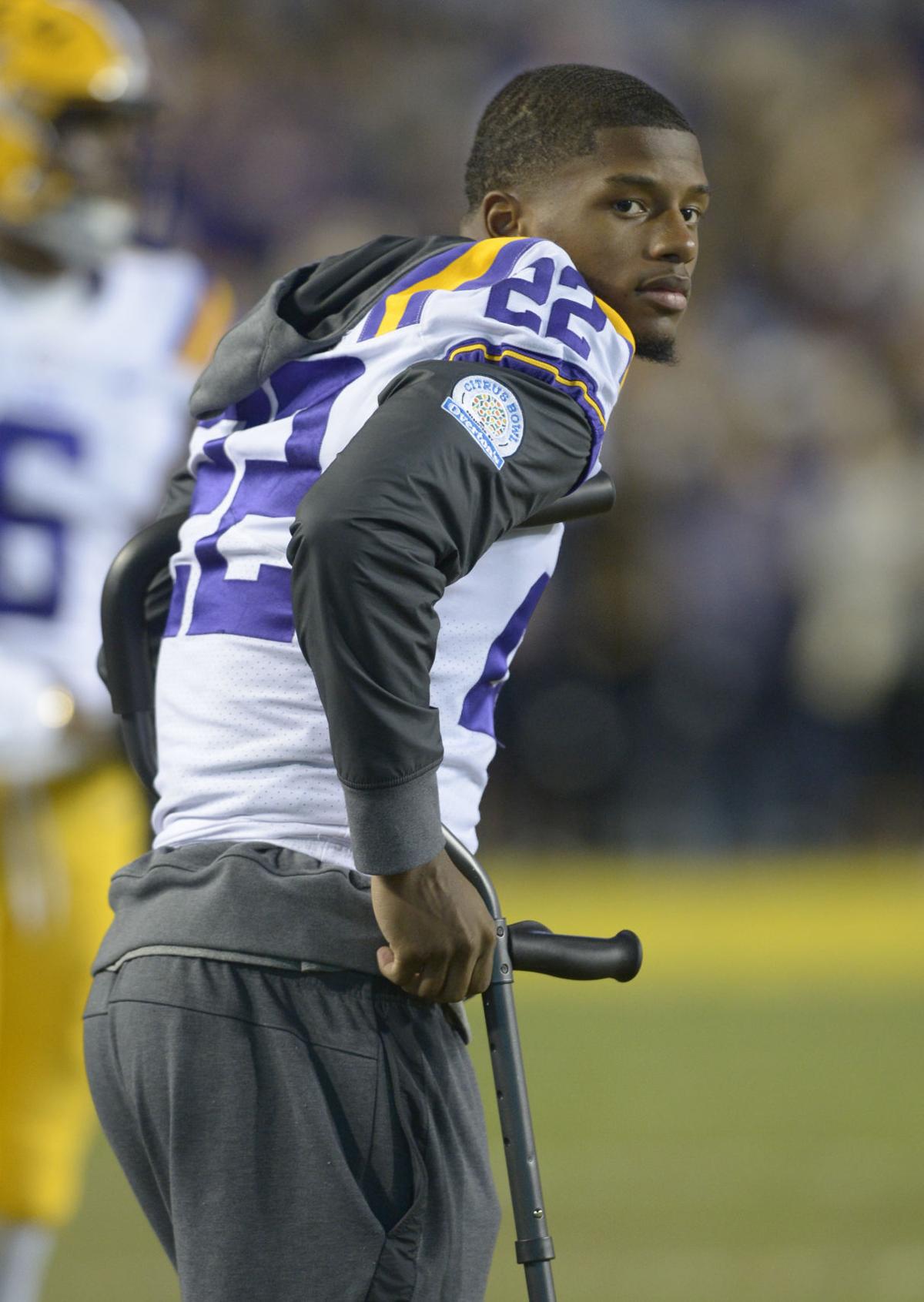 Returning from injuries: The injury bug bit LSU hard and often during the 2018 season. Among several nagging injuries, five players suffered season-ending injuries: OLB K'Lavon Chaisson (ACL), NT Breiden Fehoko (arm), CB Kristian Fulton (ankle), TE Thaddeus Moss (foot), TE Jamal Pettigrew (ACL). Some of those players will be returning to action during the spring. An off-season injury included starting DE Rashard Lawrence, who will miss the spring after surgery on his right knee. He is expected to return in the fall. 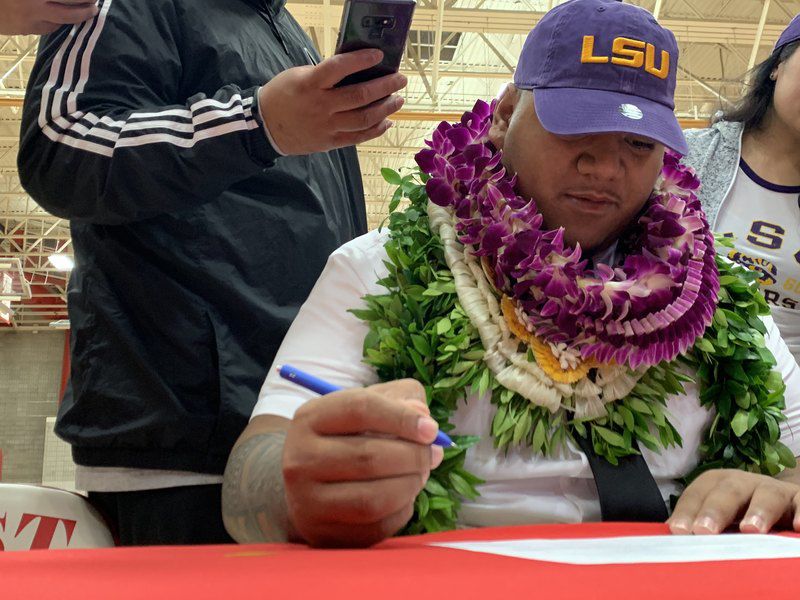 The new players: Four spring enrollees joined LSU's roster, and they'll each be pushing for playing time in 2019. The main player to watch is Dunham School's Derek Stingley, the nation's No. 1 cornerback per 247Sports, who coaches said looked like the best corner during LSU's Fiesta Bowl practices. East High defensive tackle Siaki Ika, is up to 380 pounds, Orgeron said. So he'll have to cut weight to press for nose tackle reps. TK McLendon (Copiah-Lincoln CC) will provide tight end depth for Steve Ensminger's double-tight end formations, as will Charles Turner (IMG Academy), whom Orgeron said wants to play center eventually. 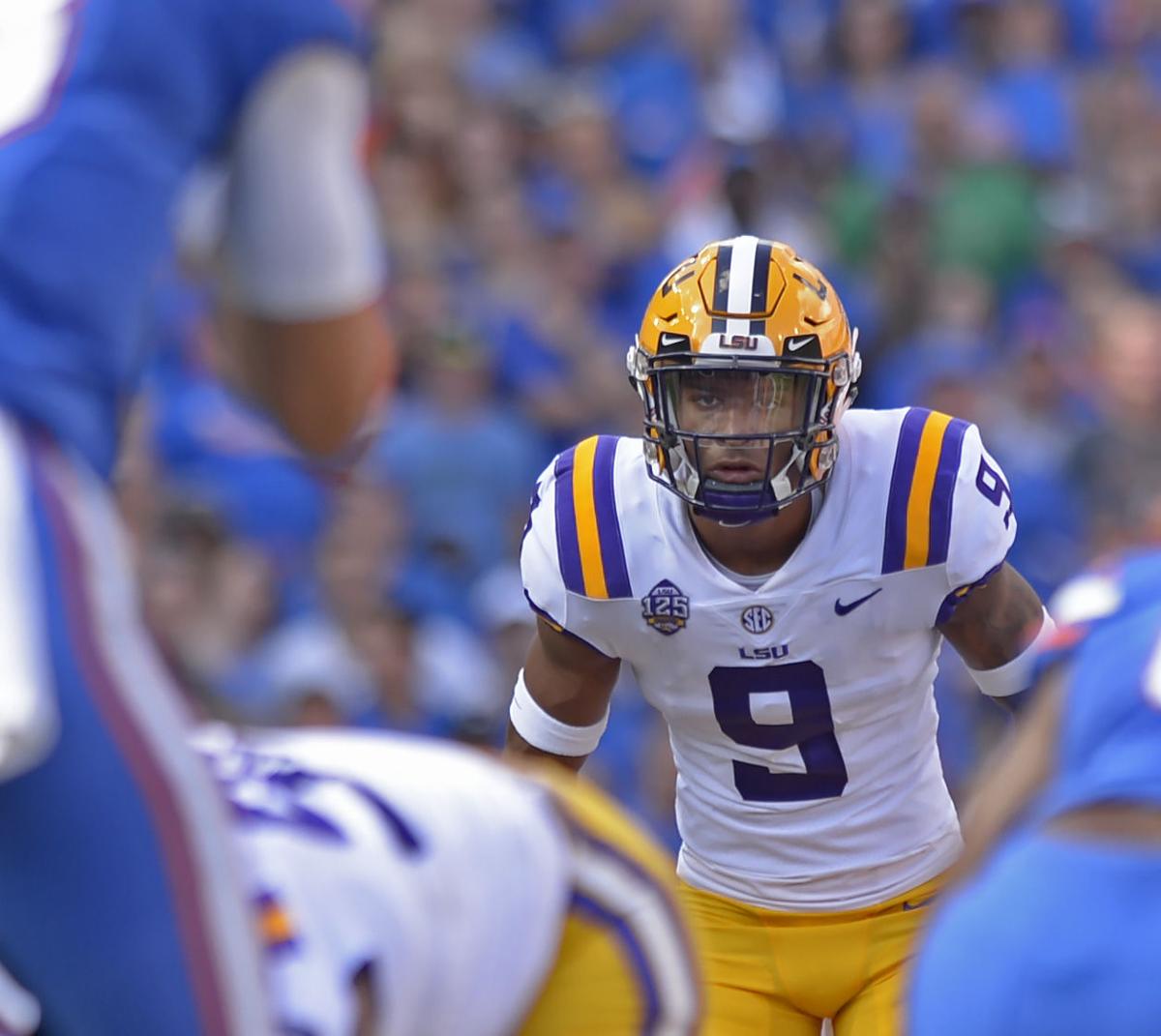 New leadership on defense: When Devin White declared for the NFL draft, LSU said goodbye to one of the greatest linebackers in its history, both as a player and as a leader. A void will be left behind for someone to fill in. Just exactly who will it be? All-American safety Grant Delpit? Successor inside linebacker Jacob Phillips? Will it be more than one? Will it be any at all? 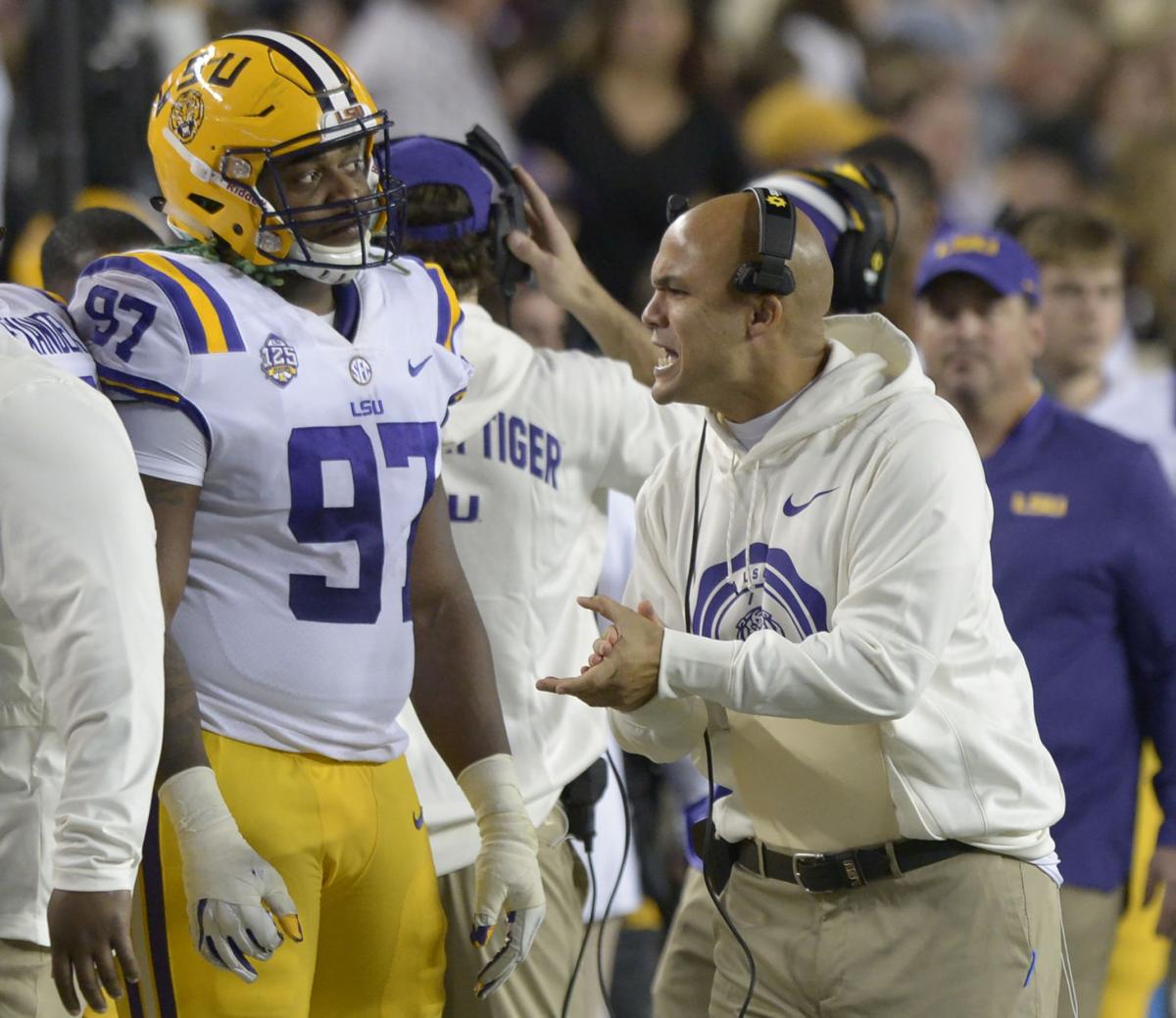 New wrinkles to defense: Just what kind of new pieces will defensive coordinator Dave Aranda have in store for the Tigers? In 2018, Aranda had to create quarterback pressure without Chaisson, and he used Devin White's freakish speed at inside linebacker as a replacement method. Without White, what does 'The Professor' cook up? 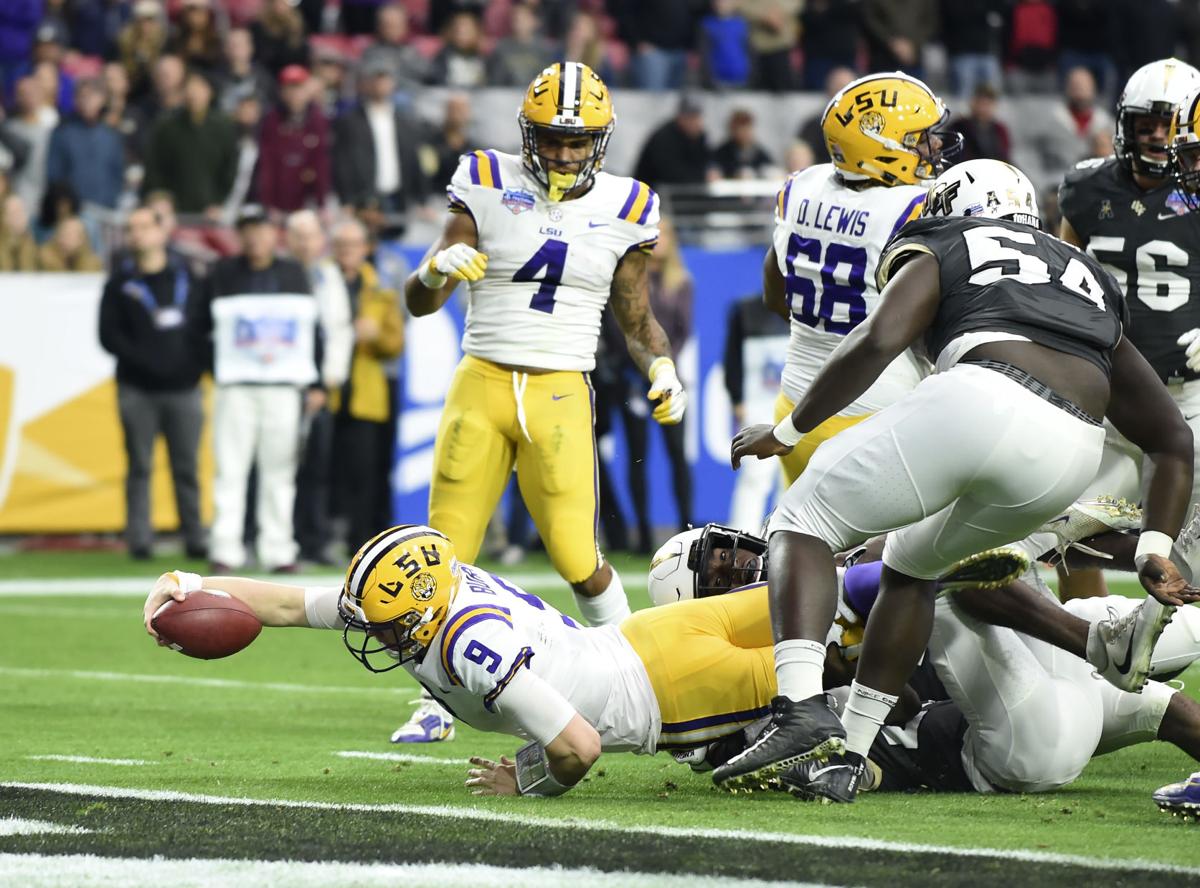 Quarterback: There's no question who LSU's starting quarterback is going into the spring. Joe Burrow was the offensive MVP in the Fiesta Bowl victory over Central Florida. In his final four games of 2018, he threw for 1,166 yards, 10 touchdowns, one interception, and he rushed for 146 yards and three touchdowns. Just how much better will Burrow get after a full season in Baton Rouge? 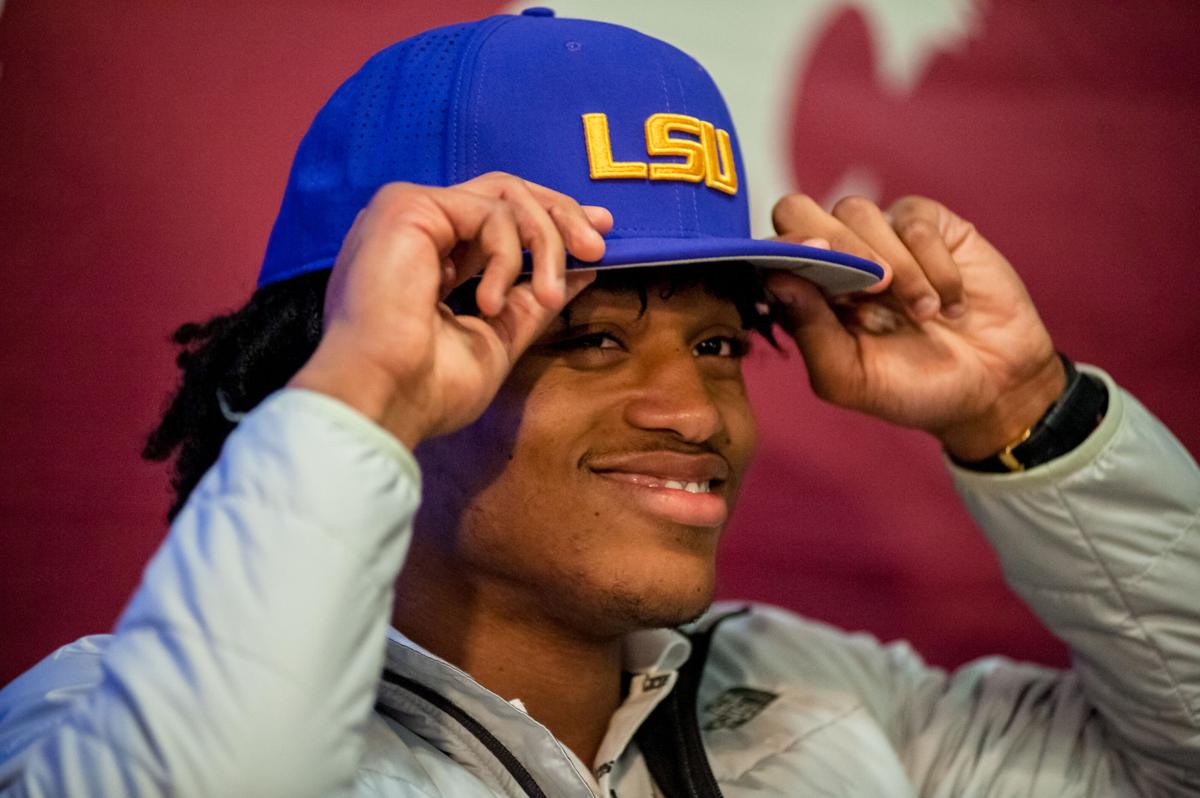 Running back: Clyde Edwards-Helaire is the clear incumbent, with 658 yards and seven touchdowns rushing in 2018. But there's a few unproven running backs on LSU's roster that will have to prove themselves before the incoming freshman talent arrives in the fall with the nation's No. 2 overall RB John Emery and No. 6 Tyrion Davis-Price. Chris Curry and Tae Provens both had limited carries during their true freshmen seasons in 2018. Will their spring performances lead to playing time? Transfer portals?

Offensive line: LSU used seven different offensive line combinations in the first eight games of the 2018 season. Then, the Tigers used the same starters in the final five games. They'll return four starters — minus starting left guard Garrett Brumfield, whose eligibility expired — but spots may be up for grabs since LSU ranked 106th nationally with 35 sacks allowed. So how will tackles Saahdiq Charles and Austin Deculus perform? Promising signees Kardell Thomas and Anthony Bradford won't arrive until June. So where will the depth come from? 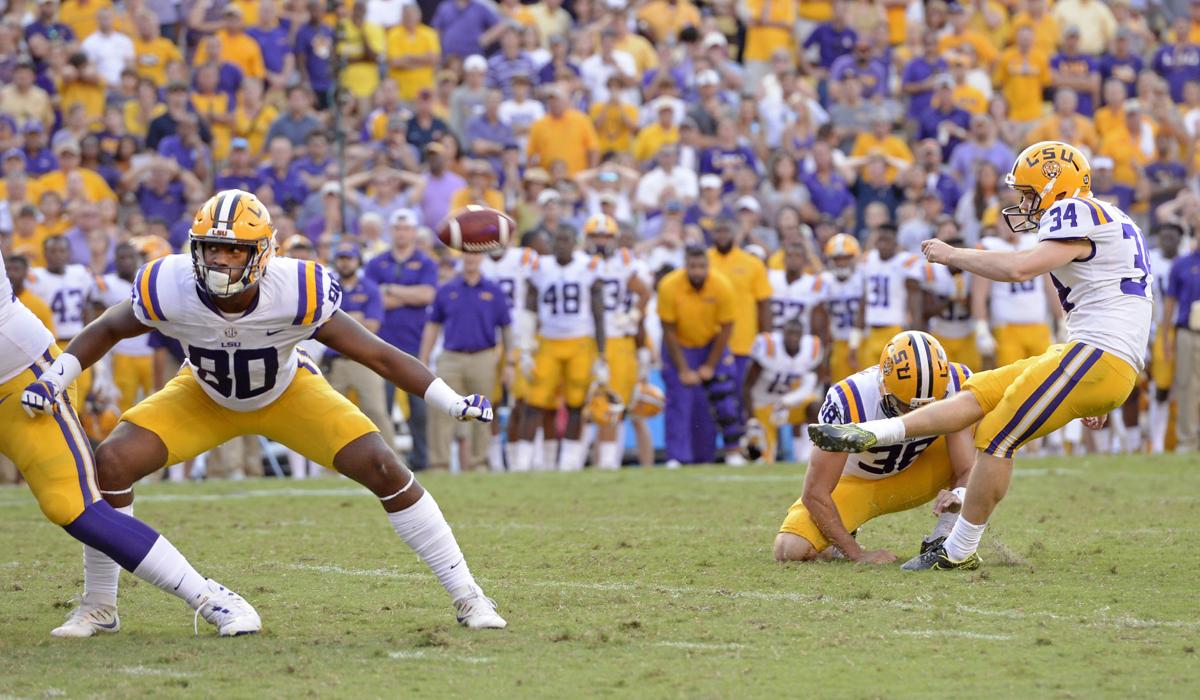 Kicker: Gone is one of the greatest kickers in LSU history. So who will replace Cole Tracy, the one-and-done graduate transfer who set seven school records in 2018? Orgeron spoke confidently about Texas native Cade York, a freshman who kicked a 59-yard field goal in the Under Armour All-America game in early January. But York doesn't arrive until June. There's also Connor Culp, who made 11 of 16 field goals (68.8 percent) in 2017, and Jack Gonsoulin, who made 5 of 11 (45.5 percent) in 2017. Their inconsistency is what led to LSU signing Tracy. Have they improved? 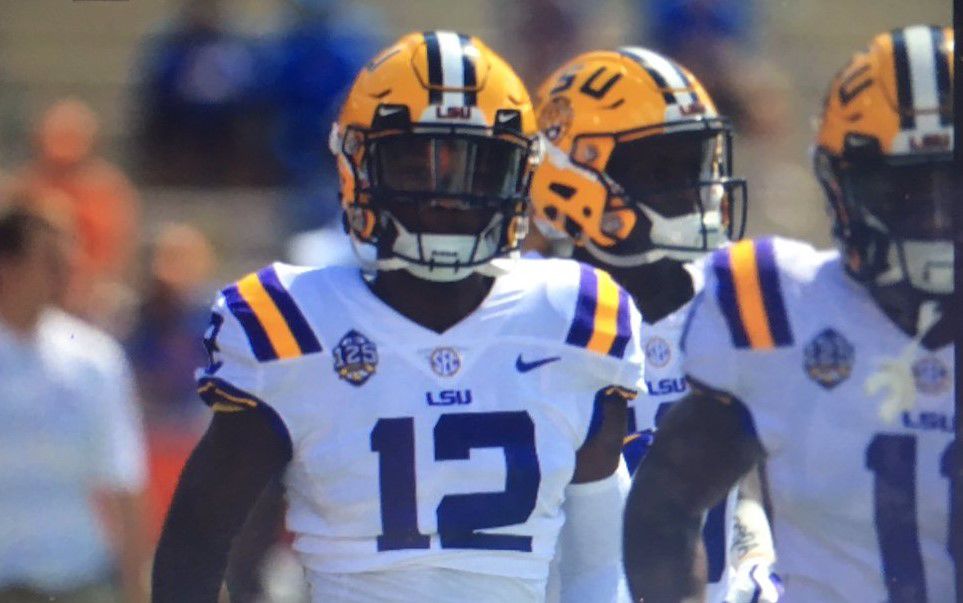 Punt returner: Perhaps the most volatile position in all of 2018, a lot of attention will be focused on who solidifies punt returning duties for LSU during the spring. Jonathan Giles muffed a punt against Texas A&M, as did Justin Jefferson against Central Florida. Orgeron said Stingley has the ability to return punts, as does nickel safety Kary Vincent. The Tigers would go for an explosive player, but it would seem they'd settle for something more consistent than last season. 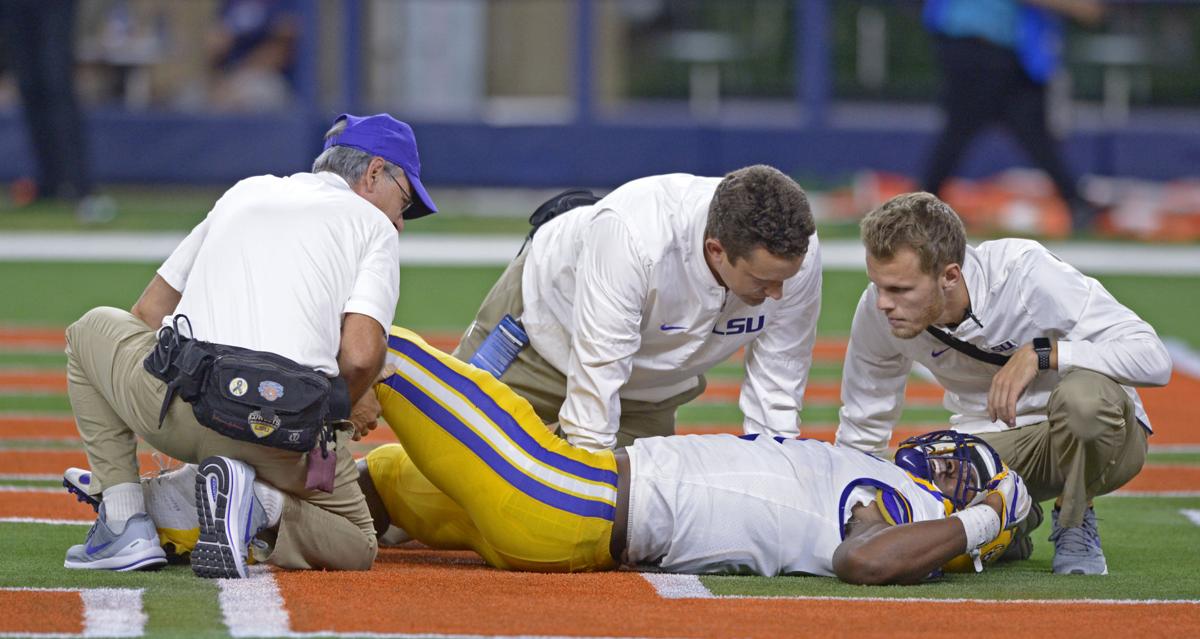 OLB K'Lavon Chaisson: The edge rusher was expected to break Arden Key's single-season school sack record in 2018, at least if you asked Devin White, before he suffered a season-ending torn ACL in the season opener against Miami. Just how good will he look in his recovery? 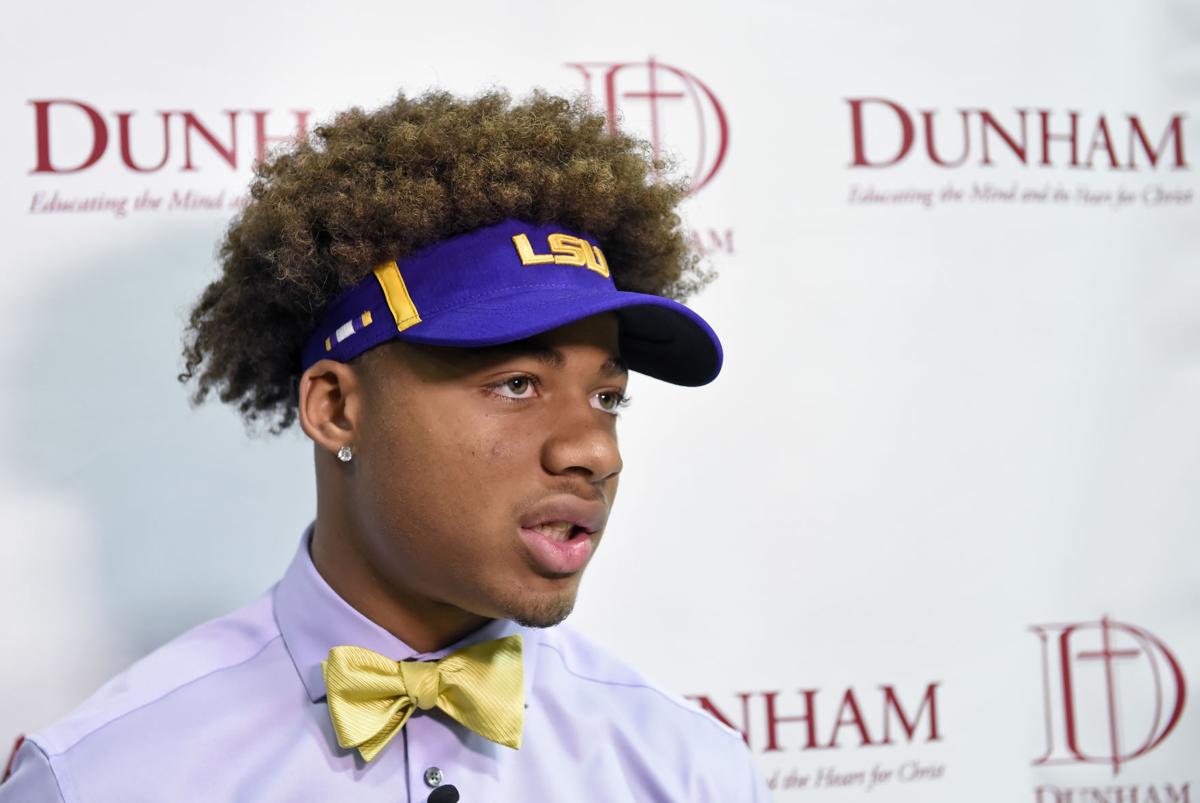 CB Derek Stingley: Word bubbled out from the LSU coaches that Stingley looked like the best corner during the few Fiesta Bowl practices he participated in. Will he meet that kind of expectation with the kind of performance that will solidify a starting spot, presumably, opposite Kristian Fulton? 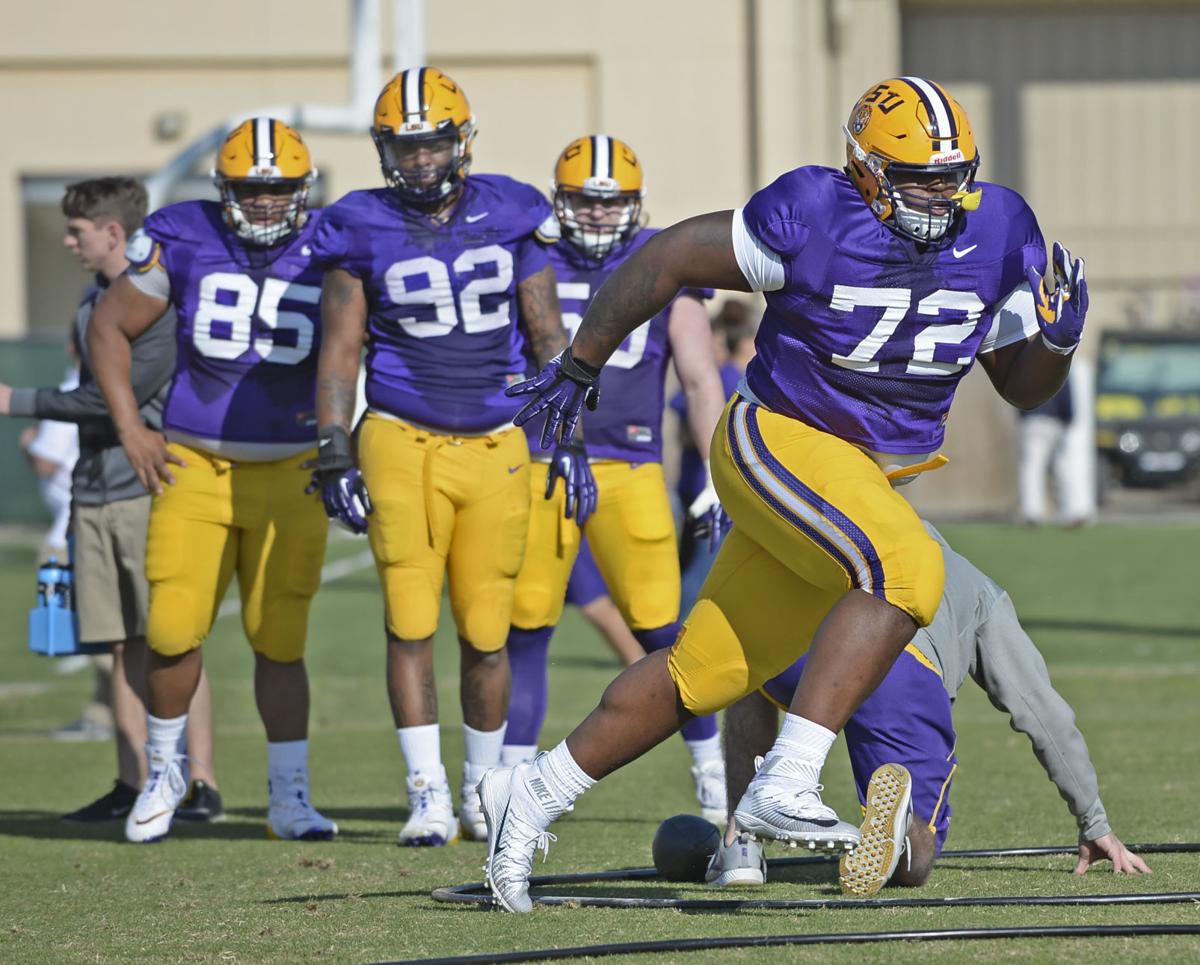 NT Tyler Shelvin: Listed at 6-foot-3, 378 pounds, the Lafayette native produced at nose tackle when he was plugged in against Texas A&M and Central Florida, when he combined for 1½ sacks and half a tackle for loss. The player Orgeron once said reminded him of Glenn Dorsey will be in competition with Breiden Fehoko and Siaki Ika for the starting spot at nose tackle. 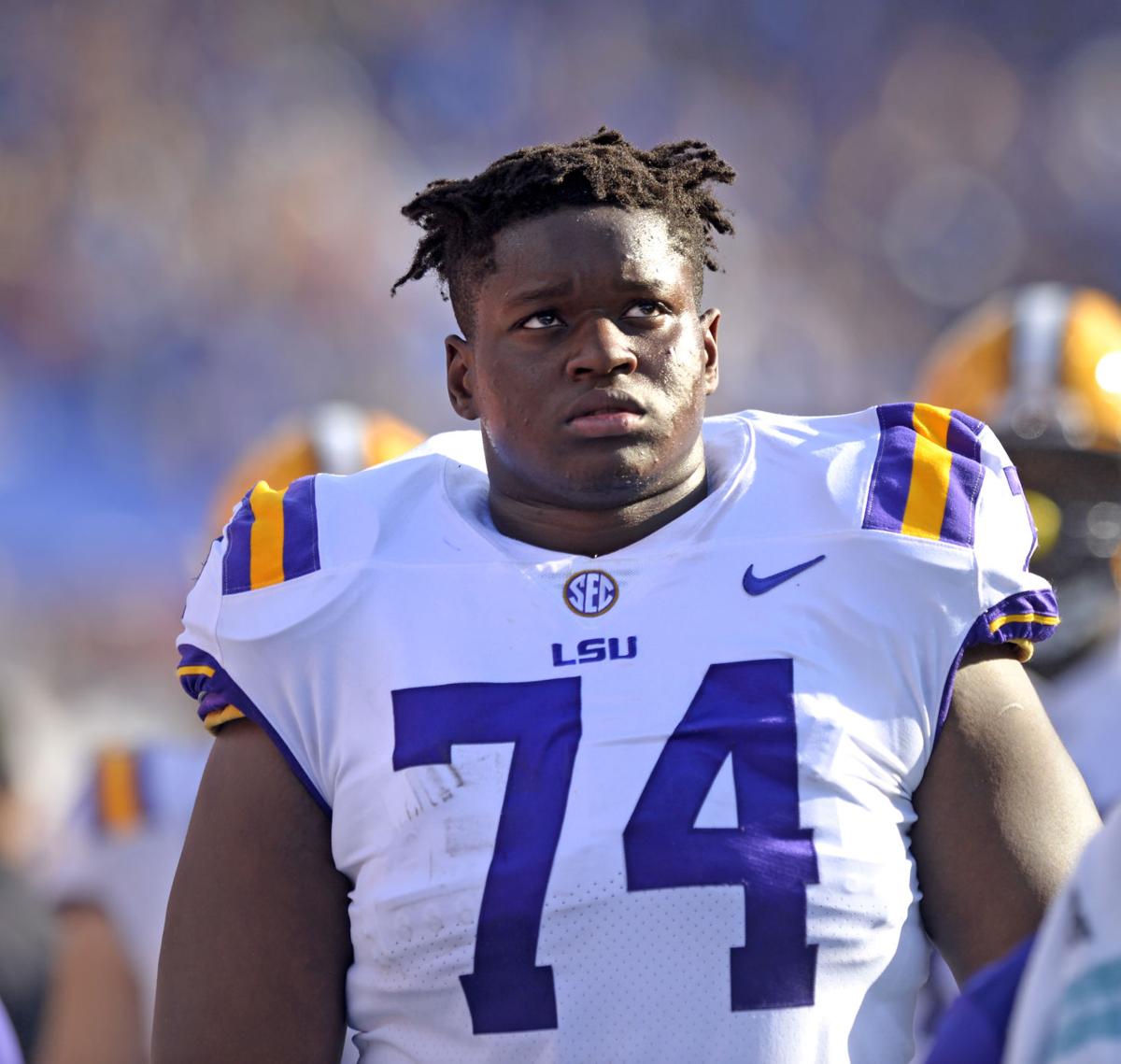 OT Badara Traore: The JUCO offensive lineman started at right tackle against Southeastern and at left tackle against Louisiana Tech; but Traore struggled and saw minimal playing time, although he played in every game. Can he evolve into the day-to-day contributor LSU hoped he'd become? 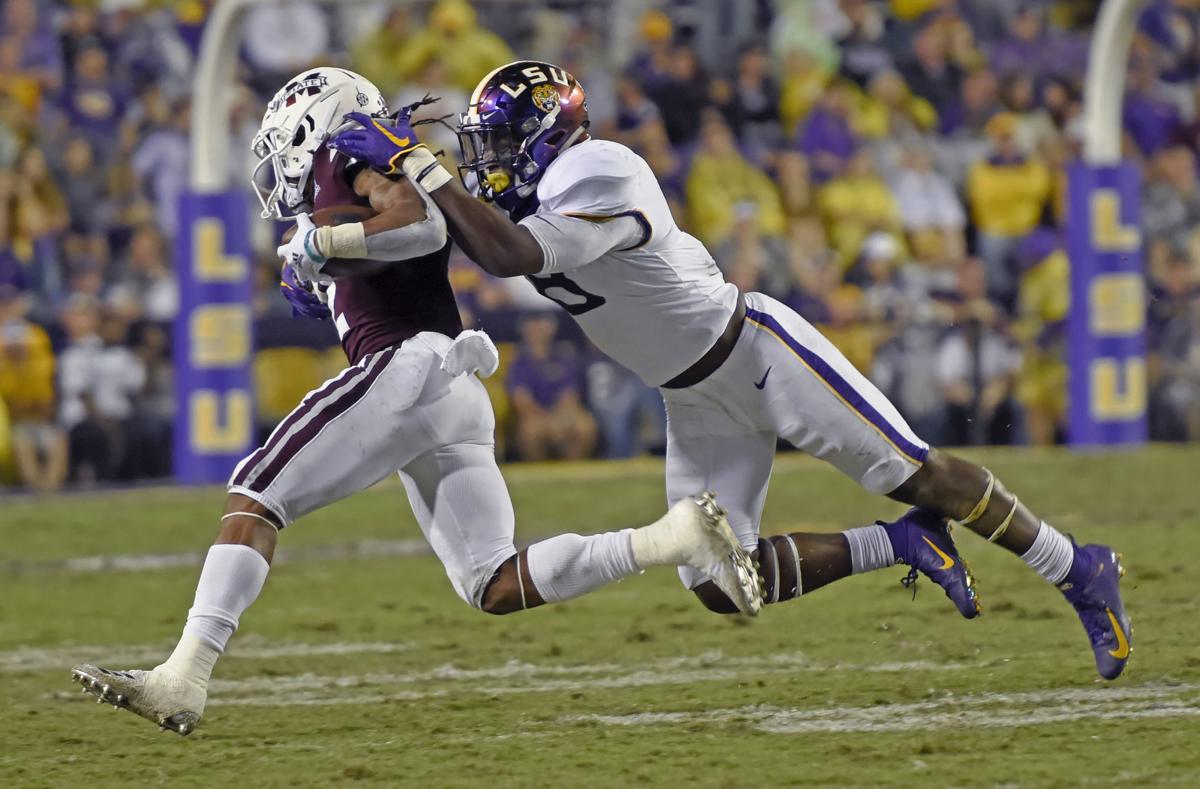 LB Patrick Queen: Shuffled across the depth chart in 2018, Queen filled in as Devin White's backup at Rover, and he even shifted to outside linebacker for a few games to help a struggling pass rush. With White gone for the draft, Queen will be in competition for the open spot with Micah Baskerville and Damone Clark.

LSU football is back! Here's what happened on the first day of spring practice

LSU football is back.

Grant Delpit will next wear LSU's coveted No. 7 jersey.