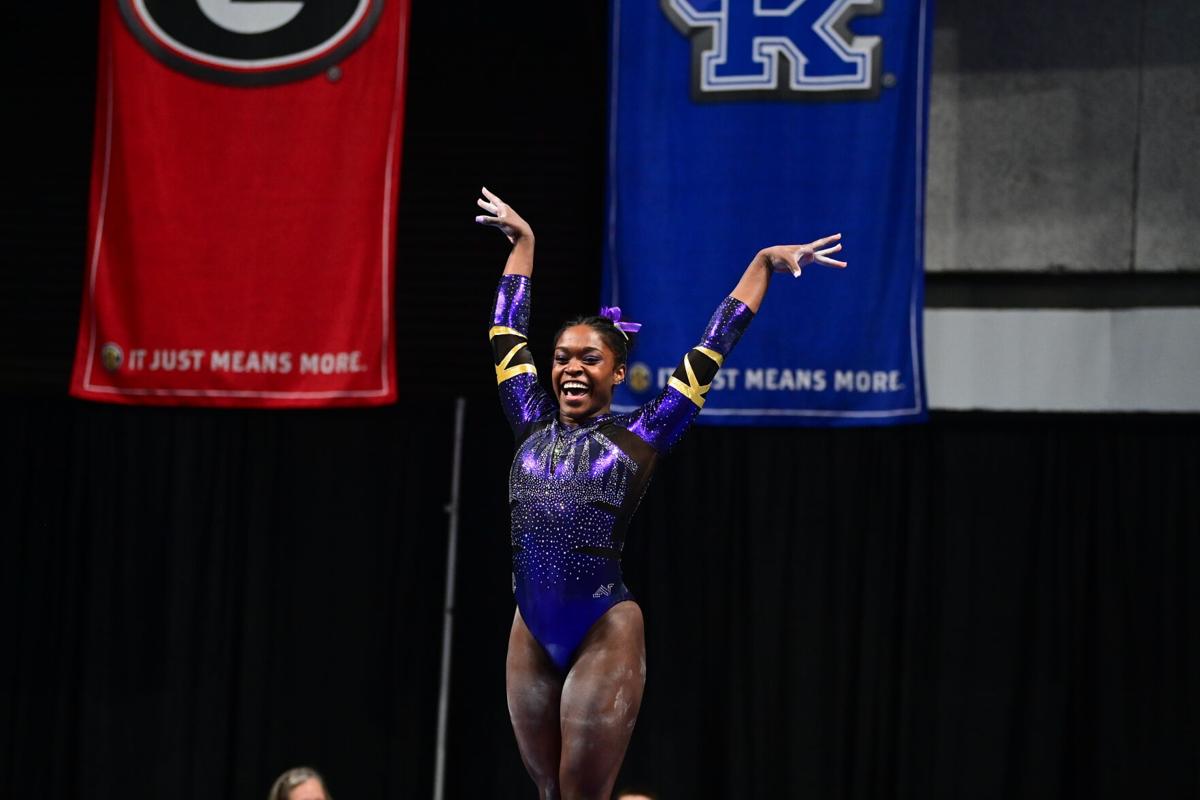 Kiya Johnson celebrates her floor routine at the SEC Gymnastics Championship at the Von Braun Center Propst Arena in Hunstville, Ala., on March 20, 2021. Johnson scored a perfect 10 on the event. 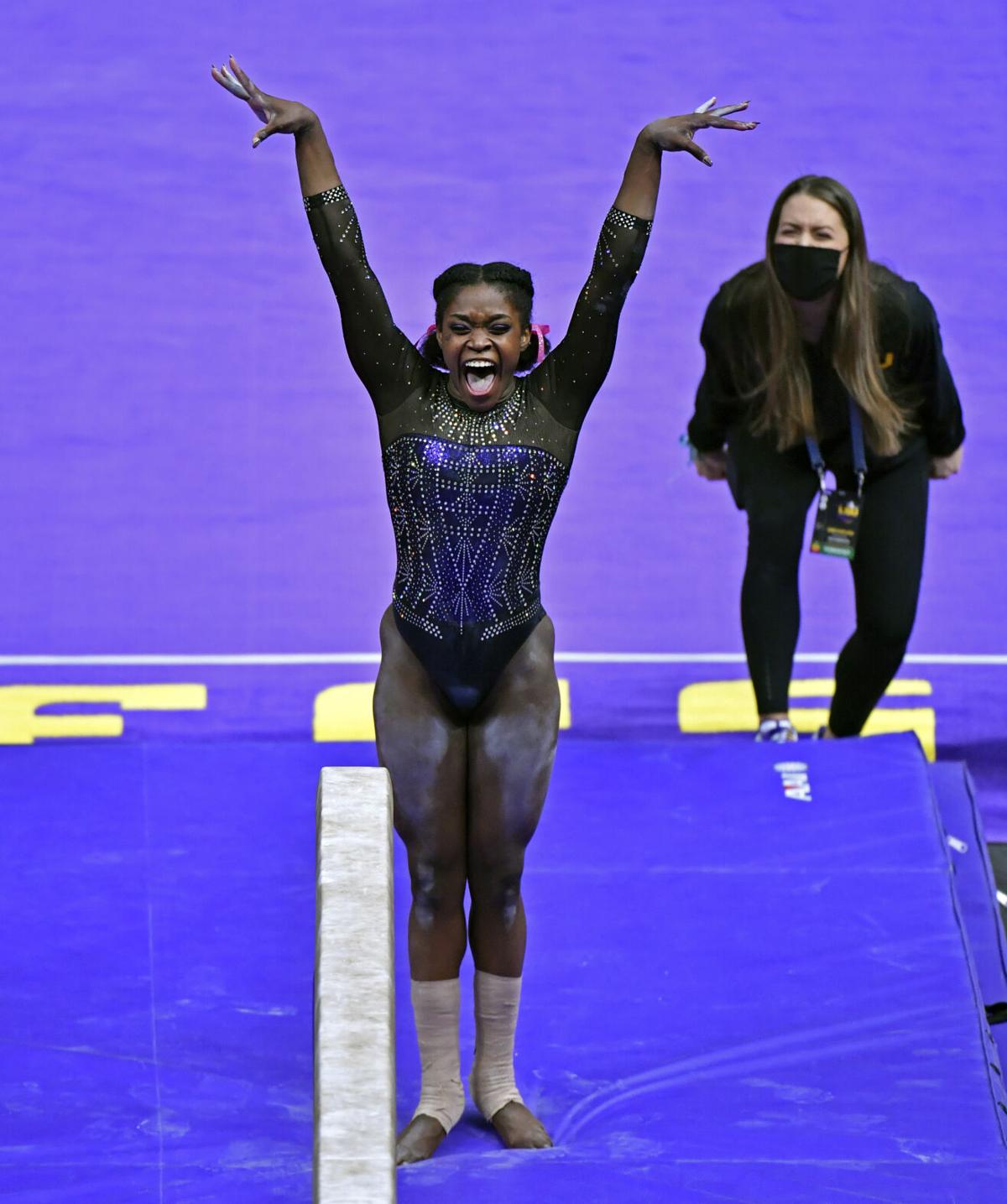 LSU sophomore Kiya Johnson celebrates after sticking the landing on beam against Florida, Friday, February 12, 2021, at the LSU PMAC in Baton Rouge, La. 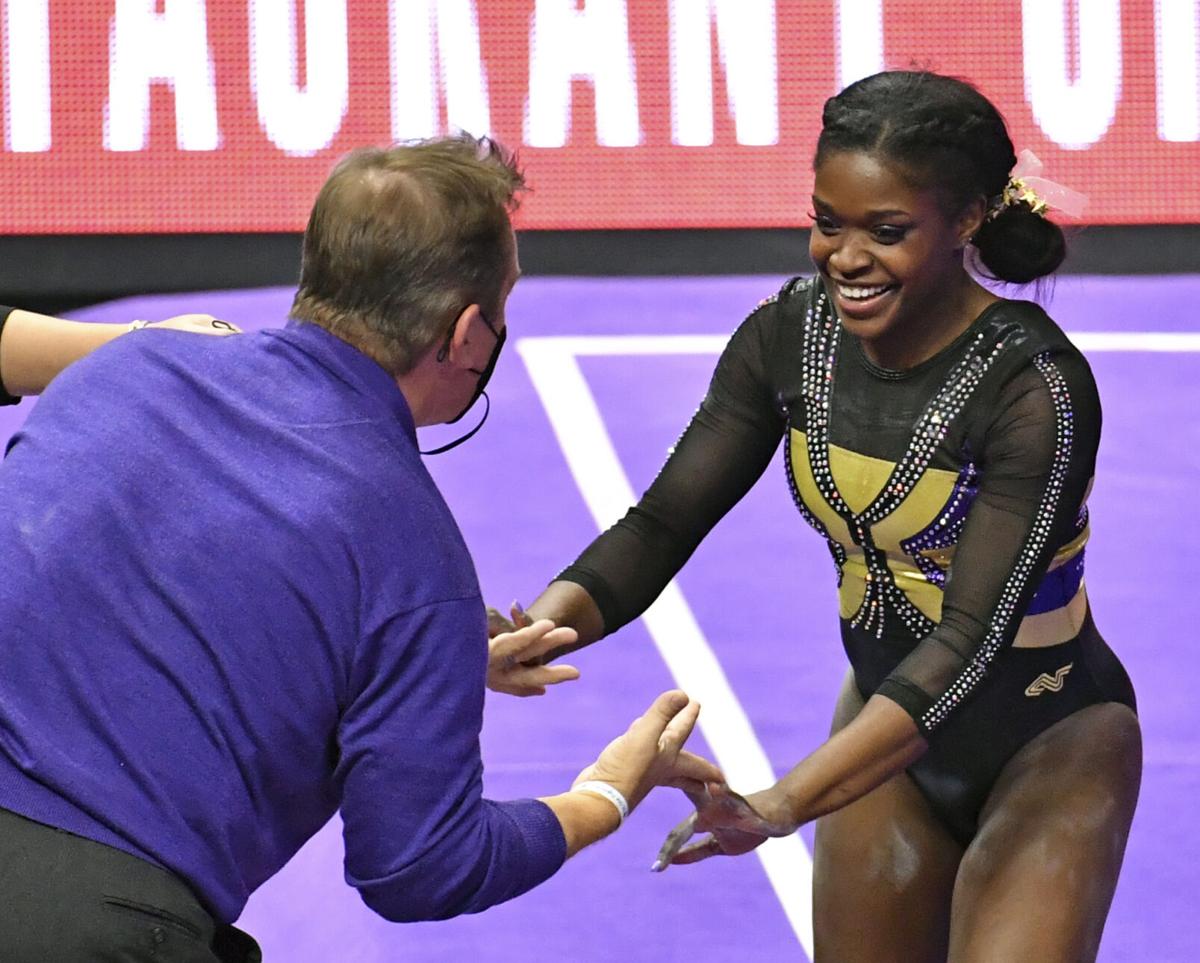 LSU sophomore Kiya Johnson celebrates with coach Jay Clark after her perfect 10 on floor in the Tigers' season opener against Arkansas, Friday, January 8, 2021, in the Pete Maravich Assembly Center.

Kiya Johnson celebrates her floor routine at the SEC Gymnastics Championship at the Von Braun Center Propst Arena in Hunstville, Ala., on March 20, 2021. Johnson scored a perfect 10 on the event.

LSU sophomore Kiya Johnson celebrates after sticking the landing on beam against Florida, Friday, February 12, 2021, at the LSU PMAC in Baton Rouge, La.

LSU sophomore Kiya Johnson celebrates with coach Jay Clark after her perfect 10 on floor in the Tigers' season opener against Arkansas, Friday, January 8, 2021, in the Pete Maravich Assembly Center.

The scoring assistants at the Southeastern Conference Gymnastics Championship twirled their boards, revealing the marks on floor for LSU’s Kiya Johnson:

This is what she waited for since her freshman season was cut frustratingly short during the early stages of the coronavirus pandemic. The thing for which she bided her time for weeks as LSU’s coaching staff held her in reserve on floor to preserve her tender Achilles’ tendon — for meets such as this.

Now, in the thick of postseason competition, the second of what the Tigers hope are three championship meets, Johnson is ready to shine again as LSU takes the floor Friday night in the NCAA Salt Lake City regional.

“I’m super excited,” Johnson said. “All the seniors have talked about the postseason being the most fun part of the season. We got that taken away from us last year. It’s something underclassmen are excited to experience.”

The LSU gymnasts have a plan and a pattern to conquer the upcoming NCAA championships, senior Sarah Edwards said.

It’s doubtful Johnson is much more pumped up to perform than her coaches are to see her out there.

After Johnson’s perfect routine on floor in the SEC meet, coach Jay Clark turned to assistant coach and 2017 NCAA floor champion Ashleigh Gnat and said, “That’s what you call a mistake eraser.”

Johnson and the Tigers, the No. 3 national seed and the top seed in the Salt Lake City regional, take the floor at 8 p.m. CDT at the Maverik Center in West Valley City, Utah. LSU competes in the evening session against SEC rival and No. 14 national seed Kentucky, Utah State and Arizona. Host Utah, the No. 6 national seed, competes in an afternoon session along with No. 11 Arizona State, Boise State and Southern Utah.

Arizona advanced because Temple, its opponent for Thursday’s regional play-in meet, had to withdraw because of COVID-19 testing issues after arriving in Utah.

LSU’s gymnasts were cleared to compete.

The top two teams from both of Friday’s semifinal meets advance to Saturday’s regional final, also at 8 p.m. All the action will be streamed live on ESPN3.com.

The top two teams from each of the four regionals will advance to the NCAA Championships, April 16-17 in Fort Worth, Texas.

To get there, and win, LSU needs Johnson at her best. Clark calls her LSU’s stabilizer. He credits her demeanor, saying her character “oozes out of her pores.”

Johnson’s worth to the team is compounded by the fact she came to LSU a year early. She only turned 19 in late February.

“She has a maturity beyond her years,” Clark said.

Johnson’s youthful exuberance was blunted by Clark’s decision to save her for this stage of the season. After a perfect 10 on floor in LSU’s season opener against Arkansas and a 9.95 on floor the following week at Arkansas, she didn’t compete on floor or as a four event all-arounder again until the Tigers’ regular-season finale against Missouri.

'Beam is going to be beam': LSU embraces challenge of gymnastics' toughest event in NCAAs

In that meet, she also recorded a 10 on floor, giving her five for her LSU career with one each on vault and beam last season. For that reason, Clark can look back on a decision that paid off.

“She feels as good physically as she has in quite some time,” he said.

With her showing in the SEC meet finally giving her enough scores to qualify for the national rankings, Johnson is No. 1 on floor with an average of 9.988.

“The biggest thing for me was patience,” Johnson said. “I did want to compete, contribute as much as I could. But because the team is so deep I knew I had nothing to worry about. I knew if I didn’t do it someone else could.”

Though Clark indicated earlier this week he may keep his all-arounders — Johnson and freshman Haleigh Bryant — from performing in all four events Friday to keep them fresh for Saturday’s regional final, Johnson said it’s time to unleash the beast.

“Our team is beyond amazing,” she said. “It’s time to show it. We’re showing it every day in practice. I can’t wait for everyone to see that. We have to build off what we’ve done. The next two meets we need to remember our training and know we can do it before the judges.”

Judges who probably already know they will be impressed when Johnson steps up.