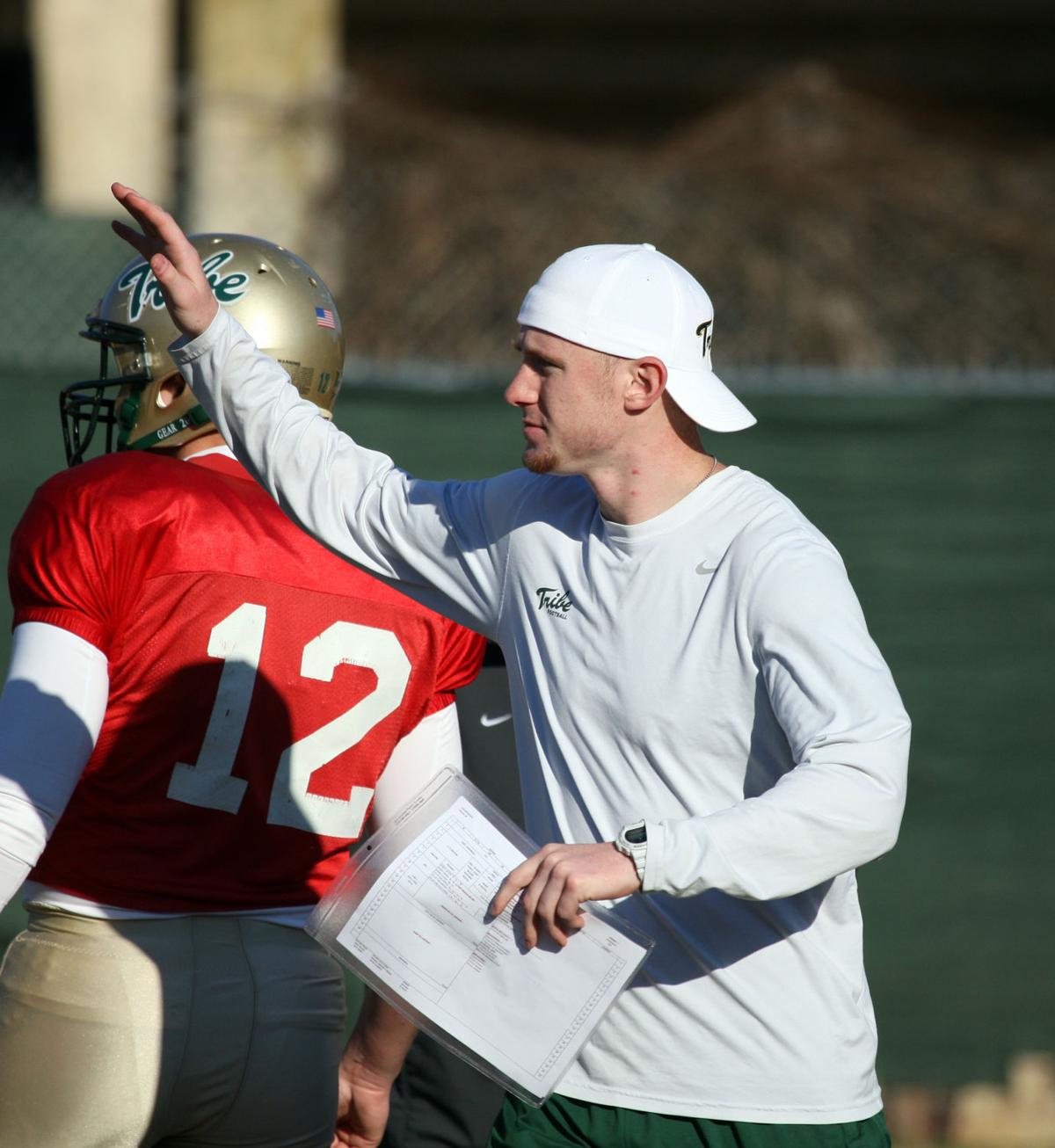 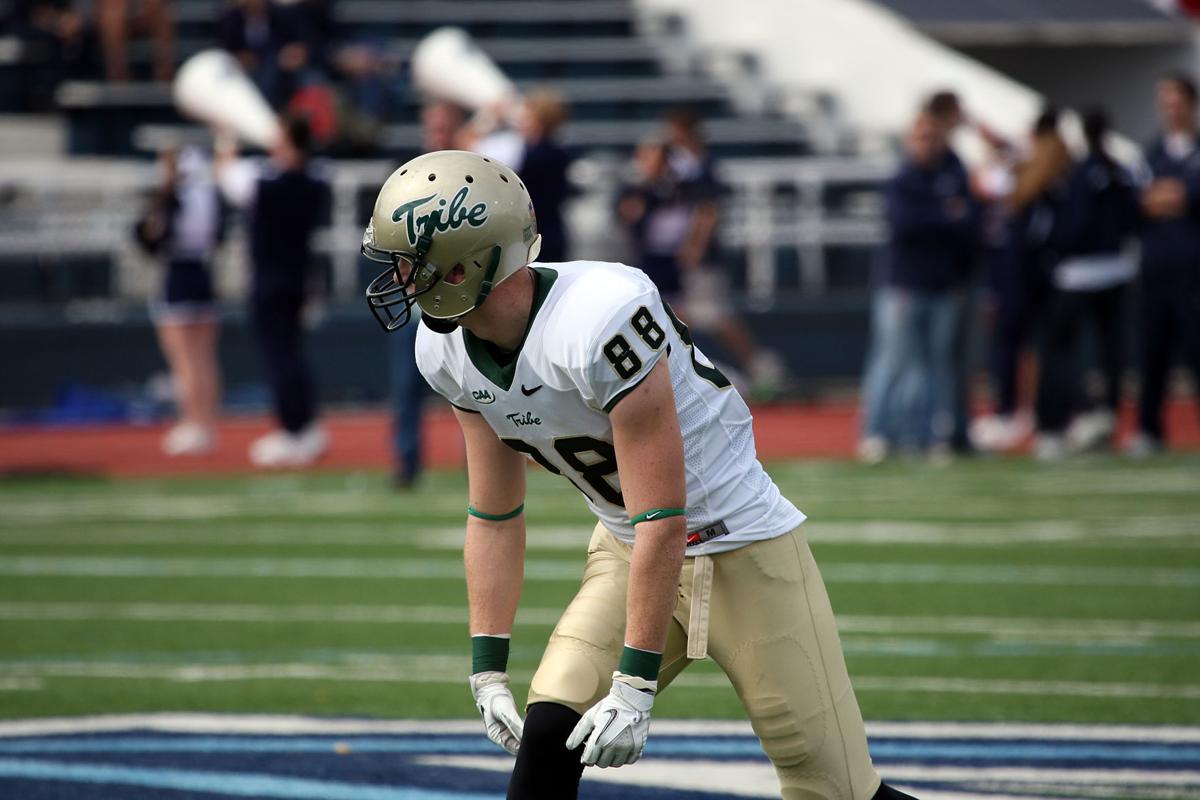 Joe Brady caught three passes for 34 yards in three seasons as a wide receiver at William & Mary from 2009-2012. 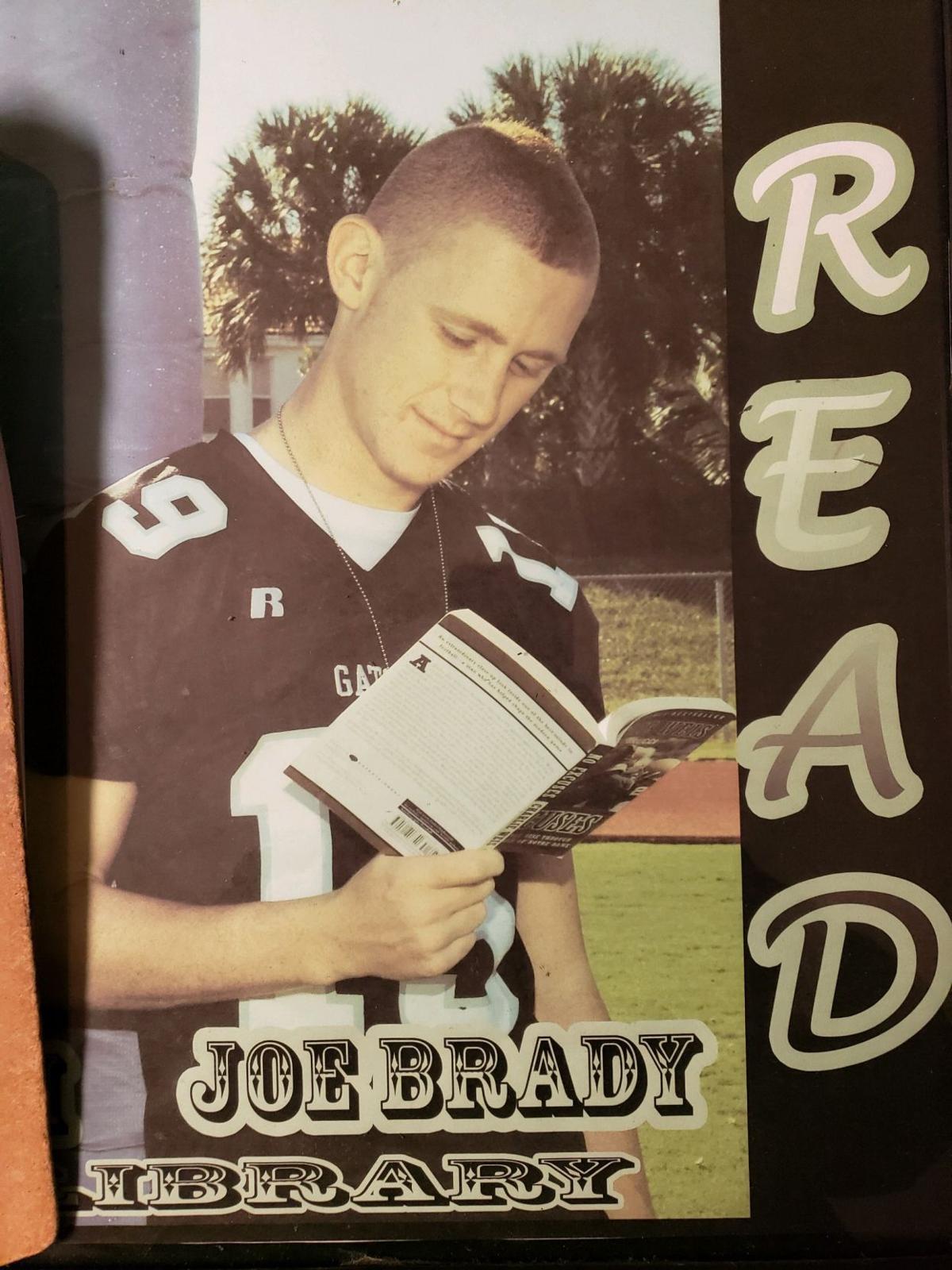 Joe Brady's picture hangs on a wall in Everglades High in Miramar, Florida.

Last summer, Ed Orgeron and the LSU coaching staff gathered inside the Tigers football facilities for a presentation. It was to learn about the New Orleans Saints offense from their offensive coordinator, Pete Carmichael, who had coached with Orgeron when they were both Saints assistants in 2008.

Carmichael brought along a young and fervent offensive assistant, who at one point took over the presentation and captivated the LSU coaching staff with his command of schemes and strategies.

The impression lasted for nearly a year, and Monday, that assistant was formally announced as the replacement for passing game coordinator Jerry Sullivan, who retired in early January.

He’s the 28-year-old — the youngest football coach on campus — who has swiftly moved up in his short career by impressing coaches with his commitment and atomic knowledge of the game.

LSU formally announced Monday morning the hiring of passing game coordinator Joe Brady, who spent the past two years as an offensive assistant…

Brady earned two bachelor’s degrees in business and kinesiology while he was a wide receiver at William & Mary, an FCS program in Williamsburg, Virginia.

Then, as an assistant coach with the Tribe, he was ushered into one of the most prestigious coaching fraternities in the history of football, which eventually thrust him into film rooms and practice fields with the potent offenses of Penn State and the Saints.

Brady’s endorsements come from head coaches like New Orleans’ Sean Payton and Mississippi State’s Joe Moorhead. Speaking to several coaches, Brady usually earned more responsibility than his small roles called for, and they say Brady is just the kind of coach to spark LSU in a highly competitive offensive era.

“There’s obviously people in high places singing his praises,” said Trevor Andrews, who was a defensive assistant at William & Mary for 18 seasons. “We won’t put our name behind somebody as coaches if that person isn’t ready for it.”

A few weeks ago, Orgeron called his friend and former co-worker, Kevin Rogers, to talk about Brady. Orgeron and Rogers had been assistants at Syracuse together in the late ’90s, and Rogers was offensive coordinator at William & Mary from 2013-16.

“(Brady’s) one of my favorite guys right there,” said Rogers, who had coached Brett Favre as an assistant with the Minnesota Vikings. “He’ll be great for Ed. Ed’s a grinder. Joe will be a grinder.”

LSU has hired a replacement for Jerry Sullivan.

'You can always count on Joe Brady'

Rodney Rumph looked over the tall, lanky freshman who said he wanted to play wide receiver for Everglades High.

“So we’re in South Florida,” Rumph said as a reminder. “This skinny fella comes in, and he’s not as fast as some of the athletes we have. When I first got him, I looked at him and said there’s absolutely no way he works in this lineup.”

Brady’s father played college football at Clemson, but the pipes to the gene pool hadn’t yet started to flow.

Rumph said he saw one of the fastest improvements in his coaching career. Brady, whose “work ethic was impeccable,” dropped his 40-yard dash time from a 4.9 to a 4.4 and ended up starting for the Gators as a sophomore.

And by the time Brady graduated in 2008, Rumph knew he would one day become a coach.

The LSU Board of Supervisors on Friday approved a new pricing plan for football and baseball tickets, which was proposed by the university's a…

“He was the one getting on your nerves asking questions,” said Rumph, who is now the head coach at Everglades. “ ‘What do I do if this happens? Where does this guy go on this play?’ You just knew that based on what he did.”

Now Rumph is the one asking Brady questions: What are schools looking for? What was it like coaching with a fella like Drew Brees?

In Everglades' short history, Brady is one of the few players to go on to become a college coach. He’ll be joining his high school teammate Jonathan Decoster, a graduate assistant at LSU who was an offensive lineman back in Miramar.

Rumph said Brady has returned to Everglades every summer since he graduated. He meets with players and answers questions. A picture hangs inside the Everglades hallways near the library, superseded by the word "READ." Brady, wearing a black Gators uniform, is engrossed in a copy of “No Excuses” — a biography of former Notre Dame head coach Charlie Weis.

“You can always count on Joe Brady,” Rumph said.

When Andrews cleaned out his defensive coordinator’s office at William & Mary in early January, he stumbled upon the “Brady Board.”

The 2-foot-by-3-foot dry-erase board had kept a weekly calendar that accounted for nearly every day from 2013-14.

Andrews had introduced the “Brady Board” as a joke — something to humorously satisfy the Tribe’s hyper-focused student assistant who always wanted to know exactly what was going on.

Meetings. Practices. Recruiting trips. All of the dates were drawn out in Expo pen.

“(Brady’s) very organized,” said Andrews, now the linebackers coach at Western Michigan. “Loves to stay on task. If I would get off task, he would get frustrated. So, I put up the 'Brady Board' and put down everything he could expect for the day.”

With the calendar, Brady knew exactly when he could get his side projects done. He earned a reputation among the William & Mary coaching staff as someone who could do an incredible amount of quality work in a short period of time. Sometimes he’d break down film. One time, he reworked Andrews’ entire defensive playbook in a completely different format.

“You’d give him a project to work on and expected it to be done in a week or two. Then, it would be two days later, and it would be done excellently,” Andrews said. “He’d do that while I was out recruiting. When I got back, I expected him to have a hundred questions for me, and he’d just have knocked it out.”

Brady’s dependability was one of the main reasons legendary Tribe head coach Jimmye Laycock allowed Brady to join the coaching staff as an unpaid student assistant the spring after his senior season.

That’s how Brady became part of one of the most impressive coaching trees in all of football.

“He wasn’t the most talented player,” Laycock said of Brady, who recorded three catches for 34 yards in three seasons after transferring in from Air Force. “But he always wanted to know a lot about everything we were doing. He really knew his stuff inside and out. In fact, some of the other players depended on him out there to know what they should be doing.”

And after Brady spent an offseason breaking down film and setting up drills, Laycock offered Brady a full-time position as a defensive assistant — the only opening the Tribe had available.

“We would usually never hire an offensive guy,” Andrews said. “But he had such a high football IQ.”

One of Brady’s main responsibilities was running the scout-team offense — a practice unit that really only needed to know enough placeholder information to give the first-string defense a sufficient look.

But Brady would teach the scout team the real thing — right down to the intricacies within Rogers’ West Coast offense.

“When I got (the scout team) back, they knew what the hell was going on,” Rogers said. “When you send the scout team down to defensive coaches, usually they’re just making up names for stuff.”

And when the William & Mary offense changed its schemes throughout the season, Brady would change it on the scout team, too.

“He taught himself the offense again and again,” Rogers said.

Rogers said Brady “basically lived at the football office,” where he was soaked up offensive information and coaching advice “like a sponge.”

Then in 2015, Brady landed a graduate assistant job at Penn State — connecting with then-defensive coordinator Bob Shoop, who had been an assistant at William & Mary from 2007-10.

Mississippi State’s Moorhead became offensive coordinator in 2016, and Brady was tutored in Penn State’s run-pass-option offense, which ranked 21st in scoring at 37.6 points per game, while the Nittany Lions went 11-3 and won the Big Ten championship game.

After Brady’s two years at Penn State, he connected with the Saints through their assistant offensive line coach, Brendan Nugent, who was Brady’s wide receivers coach at William & Mary in 2008.

'Fast-foward': Derek Stingley Jr., LSU's newest star defensive back, has always been ahead of the curve

A few days before the NCAA's early signing period, Derek Stingley Jr. thought he had it all planned out.

One of Brady’s main influences, Rogers said, was learning how to disguise offenses — something that is ingrained in Payton’s strategies in New Orleans. Rogers also disguised offenses at William & Mary.

Most of the time, Rogers said, defensive coordinators will design their game plans according to what offensive personnel they’ll see on the field.

If there’s two running backs and a tight end, the defense will throw out a play based on what the offense’s threats appear to be. But if an offense can make a play look like it’s something else — say, lining up versatile Saints running back Alvin Kamara as a slot receiver before motioning him to the backfield — it can create several successful options.

There were few options for LSU to disguise its offense in 2018, since it had taken several hits to its personnel throughout the season — most notably when senior Foster Moreau was the only tight end left after Jamal Pettigrew (ACL) and Thaddeus Moss (foot) suffered season-ending injuries.

But the LSU offense, which ranked 38th in the NCAA at 32.4 points per game last season, appears to have several tools available for 2019.

Just what kind of tweaks might Brady bring to LSU?

“Joe brings something different to the table. He’s an innovator. He’s going to be on the cutting edge.”

LSU and Ed Orgeron are working on details of a contract extension for the football coach, according to sources familiar with the situation.