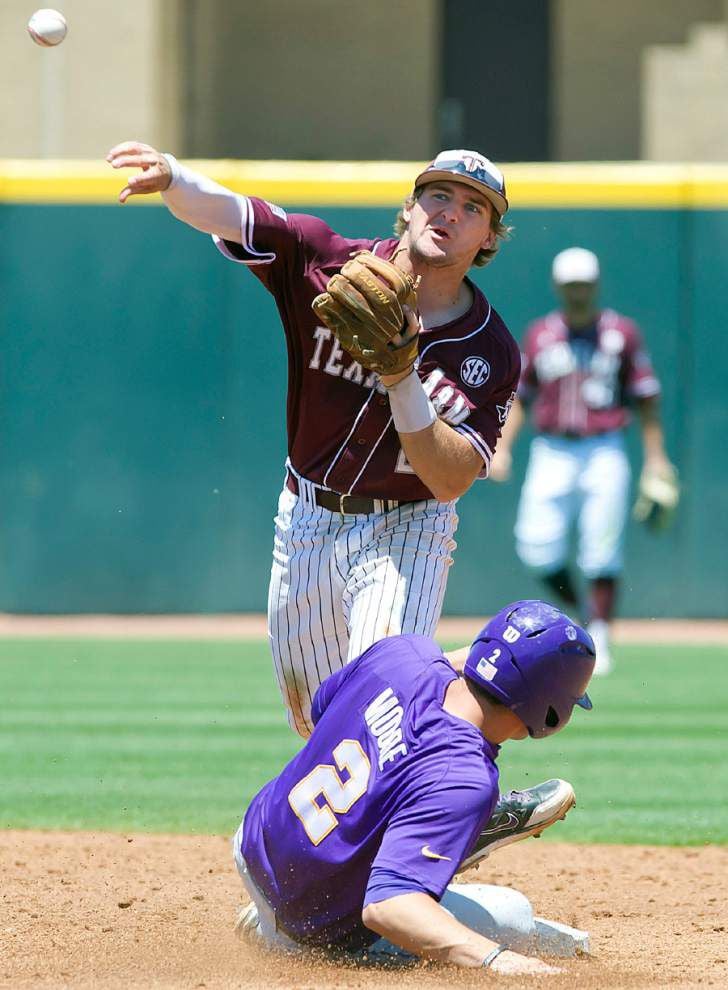 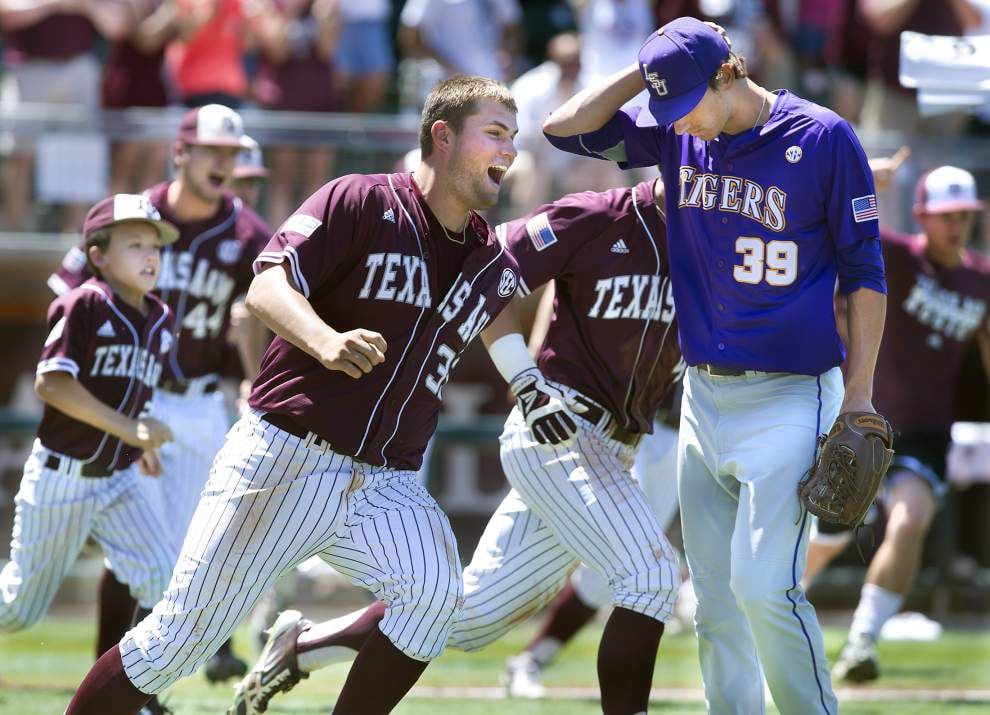 Associated Press/Bryan-College Station Eagle photo by STUART VILLANUEVA -- Texas A&M's Ronnie Gideon (33) and his teammates race past LSU reliever Kurt McCune after a game-winning single in the ninth inning to give the Aggies a 3-2 victory Saturday in College Station, Texas.

Associated Press/Bryan-College Station Eagle photo by STUART VILLANUEVA -- Texas A&M's Ronnie Gideon (33) and his teammates race past LSU reliever Kurt McCune after a game-winning single in the ninth inning to give the Aggies a 3-2 victory Saturday in College Station, Texas.

The Tigers failed to work out of another pressure-packed jam, and Cole Lankford hit a game-winning, bases-loaded single to right-center in the ninth inning to give the Aggies a 3-2 win Saturday at Blue Bell Park, evening this Southeastern Conference series at a game apiece.

Game 3 is set for 1 p.m. Sunday. The rubber match is scheduled for an ESPNU telecast and is key for an LSU team trying to secure a regional host, lock up a national seed and win a jumbled SEC West.

They could have locked it up Saturday, but LSU couldn’t muster much against A&M starter Daniel Mengden. He retired the final 14 batters, tossing a complete-game five-hitter, and the Tigers wasted two key opportunities early. They had men in scoring position with no outs in the first and second.

“When you’re up against a great pitcher like Mengden, you’re not going to get a lot of opportunities,” LSU coach Paul Mainieri said. “You’ve got to run the bases properly and got to come through in clutch situations.”

Freshman starter Jared Poché had another bumpy road start, but he worked out of multiple base-loaded jams, relying on some snazzy plays from his defenders to keep the Tigers in it.

“We were playing with fire the whole game,” Mainieri said.

LSU couldn’t dance around danger in the ninth.

Mainieri added a sixth infielder, inserting Kramer Robertson at second base and pulling an outfielder. Lankford’s shot soared over Robertson’s head and into the outfield for the winner, and the announced crowd of 5,512 erupted.

“It’s always tough to lose a game like that: walk-off hit,” Poché said. “We’ve got to flush that one.”

The Tigers head into a third straight rubber match with an uncertain pitching situation.

Mainieri said freshman reliever Parker Bugg is out with a sore shoulder; he has been a go-to guy out of the bullpen. Hunter Devall (sore shoulder) didn’t make the trip, and the Tigers may have spent McCune.

Alden Cartwright, a freshman out of Runnels, is expected to get the start. He did not pitch the first two games.

They’ll likely need their hitters to out-do Saturday’s performance. Just three batters had a hit, and LSU drew only one walk against Mengden, a junior right-hander and All-SEC selection last year.

“He was really good. Hitting his spots. Mixing up pitches,” third baseman Christian Ibarra said. “I have to give it to him. He was mixing it. Fastball wasn’t that hard, but the way he mixed his pitches got us off-guard.”

Mengden sat down the final 14 Tigers, starting with the second out in the fifth inning.

He cooled off LSU shortstop Alex Bregman, inducing three fly outs and a ground out against a guy who was 3-for-4 in LSU’s 5-4 win Friday in 10 innings.

The Tigers blew a pair of early opportunities. Andrew Stevenson was stranded at third in the first; he reached the base with no outs. Conner Hale led off the second with a double; he was put out in a rundown between second and third.

“We have a base-running blunder where a runner tries to take third base on a ball back to the pitcher,” Mainieri said. “Basic fundamentals of the game we work on every day.”

The Tigers got their only runs in somewhat fortunate fashion in the fourth inning.

That’s all they got off Mengden.

He faced the minimum in the final four innings, retiring those final 14 with eight fly outs, four ground outs and two strikeouts.

“Can’t be perfect every time,” Ibarra said. “They came through in clutch situations. We had opportunities to score. Didn’t get it done in the first couple of innings.”