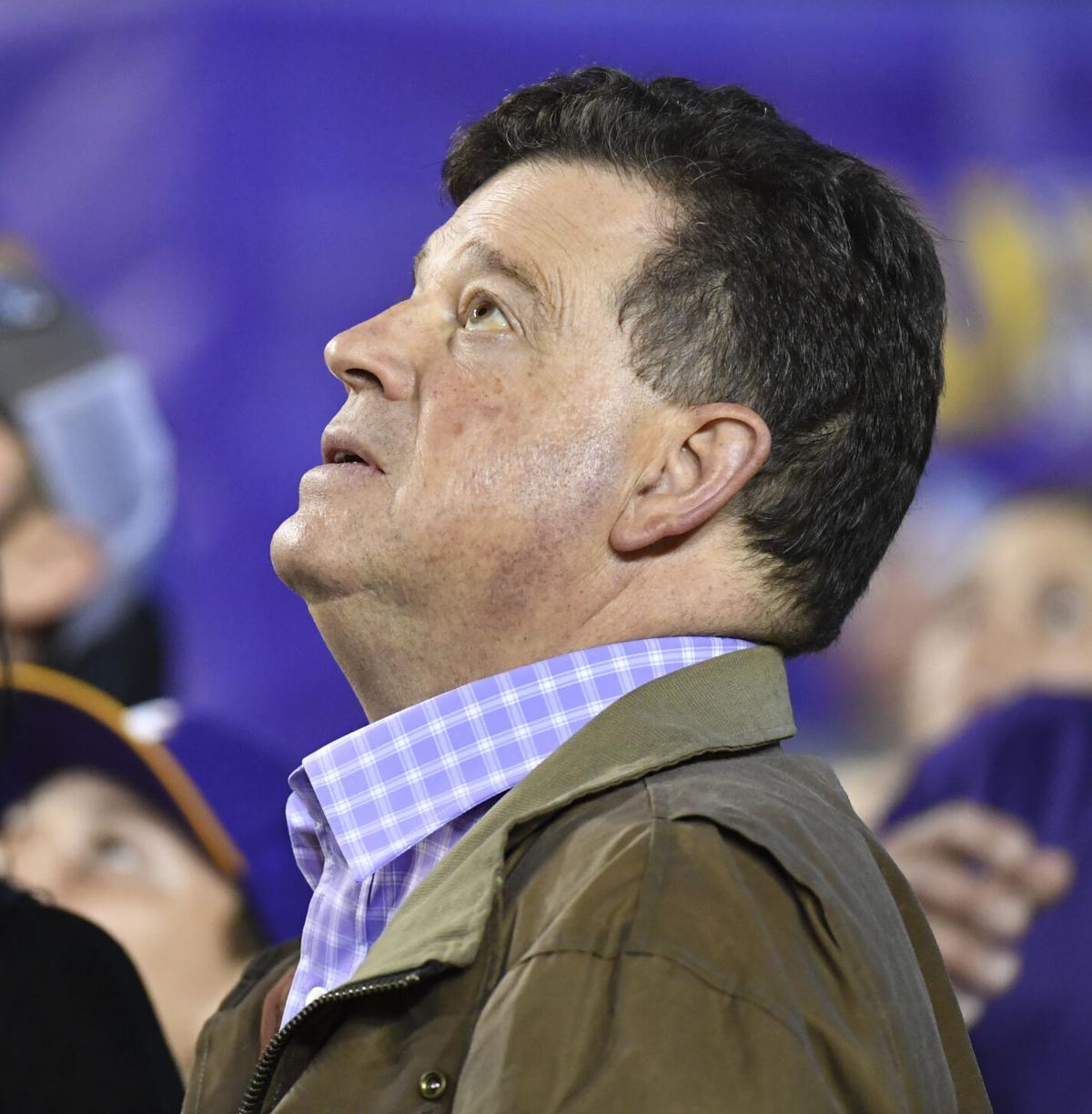 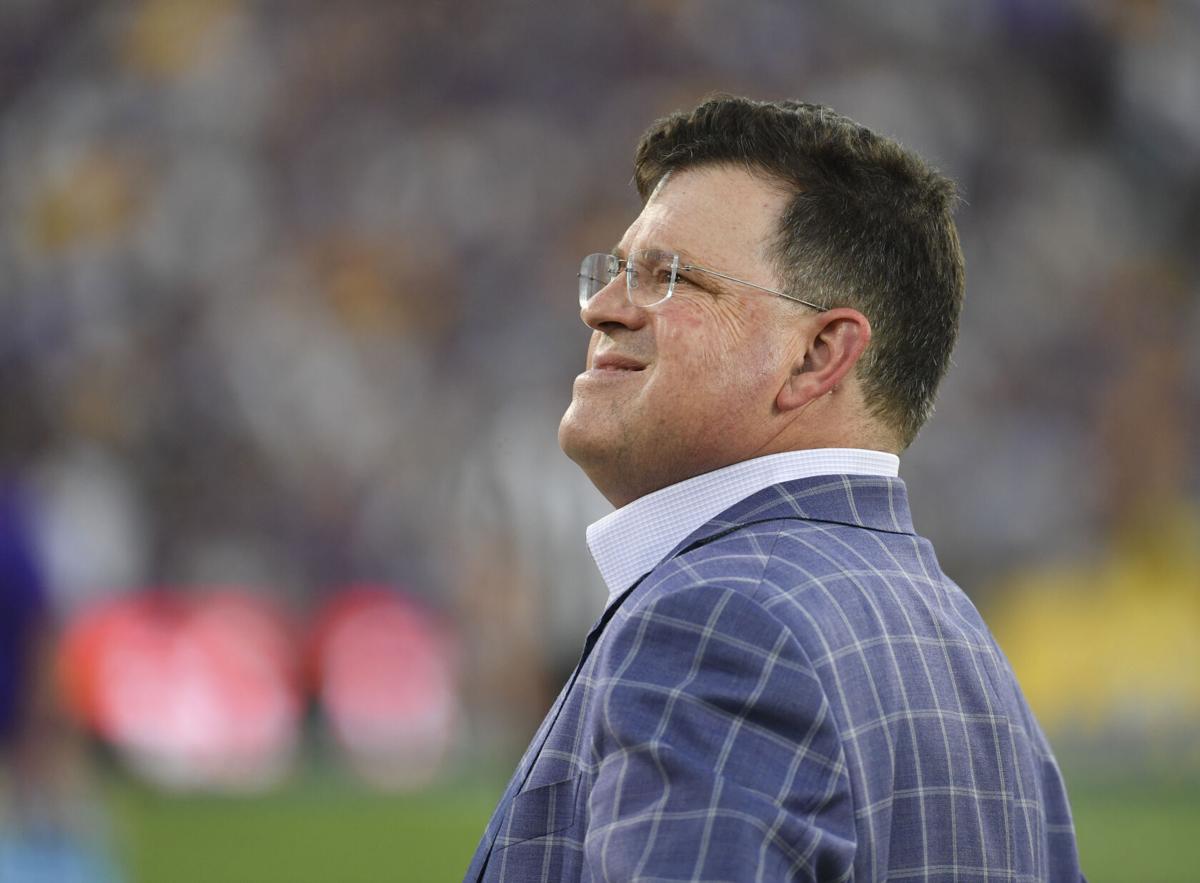 LSU athletic director Scott Woodward on the field during the Tigers' game at UCLA, Saturday, September 4, 2021, at the Rose Bowl in Pasadena, Calif.

LSU athletic director Scott Woodward on the field during the Tigers' game at UCLA, Saturday, September 4, 2021, at the Rose Bowl in Pasadena, Calif.

As soon as the clock hit zero on LSU's 27-14 victory over ULM Saturday night, you could hear the LSU coaching search audibly shift into a higher gear.

After what has seemed like a season unto itself since Ed Orgeron’s firing was announced way back Oct. 17, the days are drawing short until LSU has to identify the man who will lead its most important program into a most important future.

When you’re a school that values football the way LSU does, every football coaching hire is important. But this one carries an added urgency because of the timing.

Texas and Oklahoma are joining the Southeastern Conference sometime between next season and 2025 (it still looks like later rather than sooner for the Sooners and Longhorns). Despite the fact that Texas dropped to 4-7 Saturday with a loss to West Virginia, its sixth straight, the Longhorns and Sooners aren’t traditionally Average Joes entering the SEC. They’re historically among college football’s elite, and the competition for them and the existing 14 SEC member programs will ratchet up considerably.

Scott Rabalais: The real game for LSU — finding its next football coach — is set to kick off

My seat in the press box in Tiger Stadium is next to the glass partition that separates the working press area from the athletic director’s suite.

Texas, however, comes bearing another important message for LSU. It is a program with all the resources and ability to be great and yet has struggled to be relevant over an extended period. Remember that "We're back!" 10-4 Sugar Bowl-winning season in 2018 under Tom Herman, the coach LSU coveted when it hired Orgeron? Well, still not back. That was the Longhorns’ only double-digit win season since 2009.

How about Florida State? The Seminoles were once the paragon of consistent excellence, finishing in the final AP top five an amazing 14 straight years from 1987-2000. But they’ve struggled mightily since 2017, Jimbo Fisher’s last season there when they needed a rescheduled, season-ending win over ULM to be bowl eligible.

Fisher has been prominently mentioned as a top target in LSU’s coaching search, and he’s definitely upped Texas A&M’s game since now-LSU athletic director Scott Woodward hired him there. But he left a program in shambles for Willie Taggart and his successor Mike Norvell to deal with. The Seminoles have to beat Florida (both 5-6) next Saturday to avoid a fourth straight losing season.

The debate has raged for weeks as to which is the best available job right now: LSU or Southern California. The debate once was over the Tigers and Trojans sharing the last split national championship in 2003. Now it’s bragging rights of a far-less impressive kind.

Since 2008, when the Trojans went 12-1 in the last of seven straight double-digit win seasons under Pete Carroll, USC has had just four double-digit win seasons. They’ve played in the Rose Bowl game just once, in 2016. USC has the advantage over LSU in terms of all-time tradition. More national titles and Heisman Trophy winners, that sort of thing. But USC has shown an inability or unwillingness to pay what it costs to compete in today’s modern game. Once the Pac-12’s bellwether program, USC has struggled to stay relevant in Oregon’s wake.

I still have a video that runs through my mind from one of those Sugar Bowls LSU played against Nebraska in the 1980s, with a Cornhusker player picking up an LSU player and slamming him to the Superdome turf. Forever it seemed, Nebraska was college football’s neighborhood bully, winning nine or more games from 1969-2001 with five national championships.

Nebraska is far from that standard now. The Cornhuskers are suffering through their fifth straight losing season and sixth in the past seven years. They haven’t lost fewer than four games in a season since going 10-3 in 2003, with former LSU defensive coordinator Bo Pelini leading Nebraska to an interim coaching win in the Alamo Bowl.

Nebraska’s problem? It doesn’t have the in-state talent base schools such as LSU or Georgia have. That isn’t changing, and it’s hard to imagine the Cornhuskers returning to national prominence anytime soon.

Tennessee has been searching for relevance since it last won the SEC East in 2007, losing the SEC championship game to LSU's eventual national champions. The Volunteers have had eight losing seasons and five coaches since then. They’re enjoying a rebound season of sorts under first-year coach Josh Heupel, but Vol fans have to be worried that the former OU quarterback might return to Oklahoma if LSU somehow plucks Lincoln Riley for its job.

Saturday's win over ULM did little to move LSU's needle back to national relevance. The Tigers had their moments of brilliance, but overall it was a sluggish performance sandwiched between last week's 16-13 overtime loss to Arkansas and next week's finale against Texas A&M. The offense managed 411 yards, but only the 27 points, LSU's fewest in a victory this season.

Fewer LSU wins have seemed to matter less than this one, other than what it means to the Tigers' chances of upsetting Texas A&M to get bowl eligible next week. LSU is looking over the horizon, to the future wins, under its future coach, the one Tiger fans hope delivers their team back to relevance.

Ed Orgeron already had gone for it on fourth down twice Saturday night against UL-Monroe, and the unsuccessful decisions contributed to a two-…