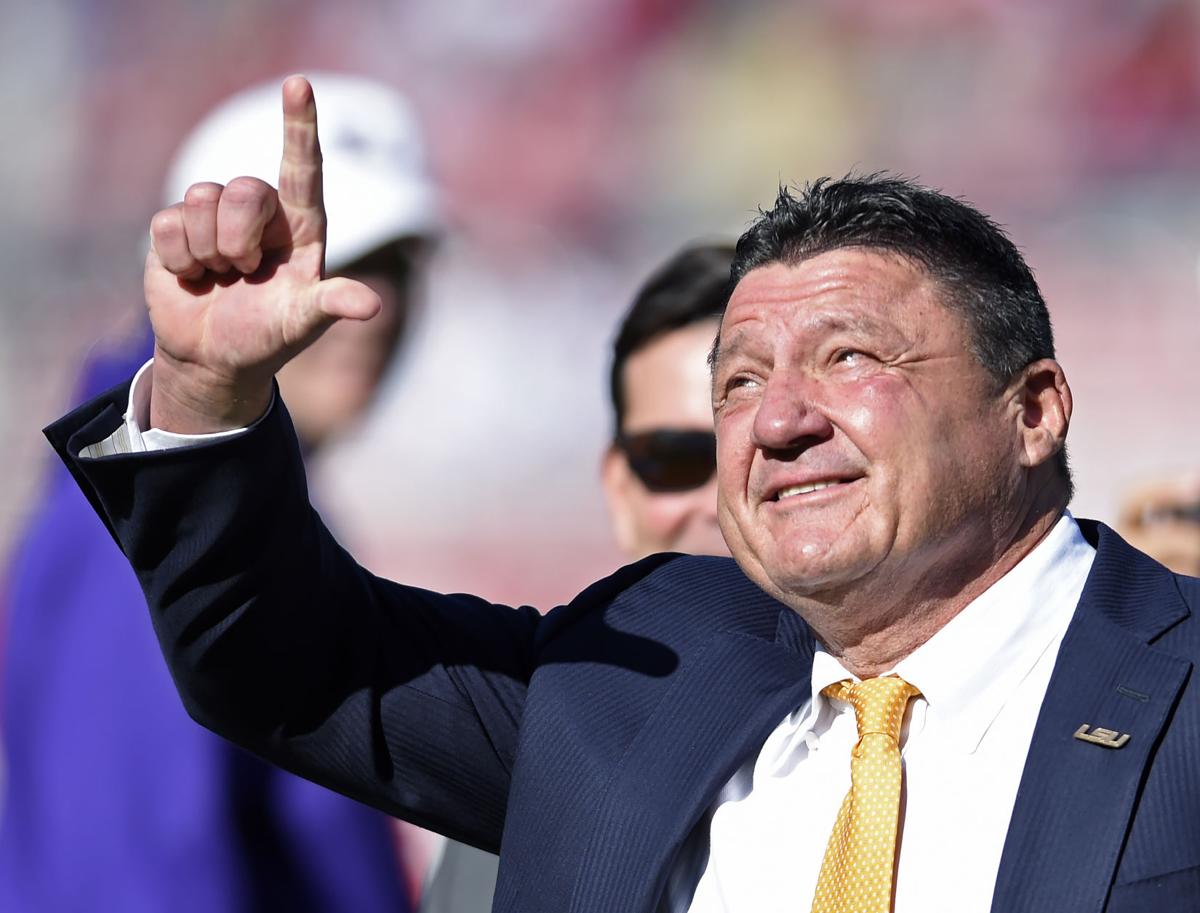 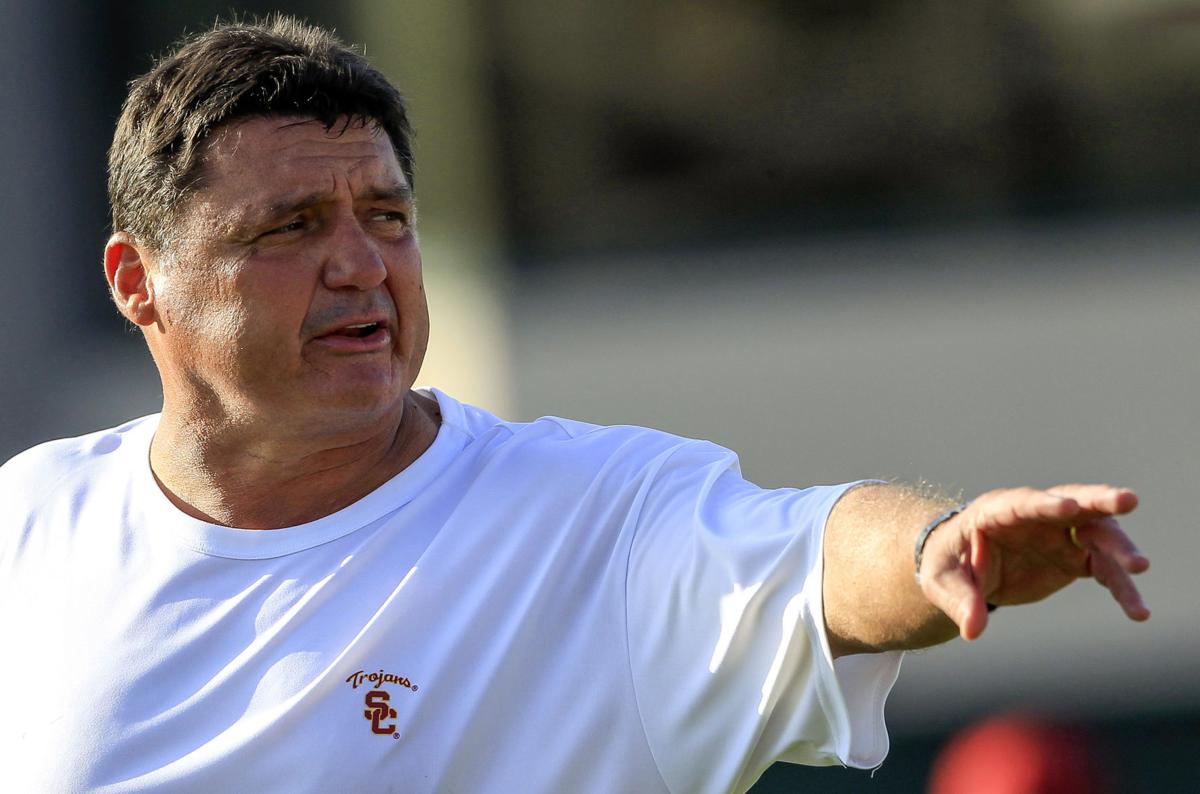 Southern California interim coach Ed Orgeron guides his players during a practice in Los Angeles on Oct. 2, 2013. Orgeron went 6-2 as the Trojans' interim coach that season. 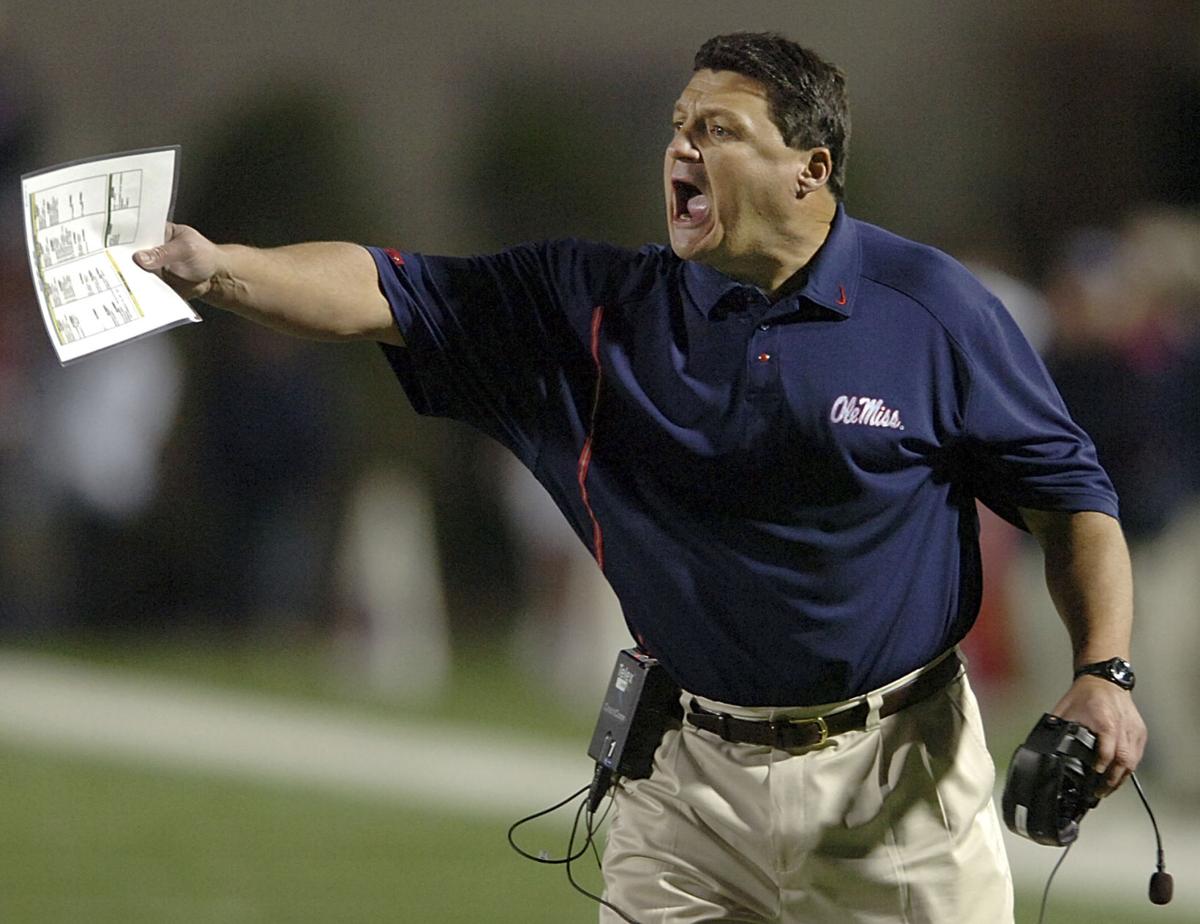 Ole Miss coach Ed Orgeron voices his displeasure after during a timeout in a game against LSU on Nov. 19, 2005, in Oxford, Miss. Orgeron went 10-25 with the Rebels but said it 'was a great opportunity for me as a young coach.'

Southern California interim coach Ed Orgeron guides his players during a practice in Los Angeles on Oct. 2, 2013. Orgeron went 6-2 as the Trojans' interim coach that season.

Ole Miss coach Ed Orgeron voices his displeasure after during a timeout in a game against LSU on Nov. 19, 2005, in Oxford, Miss. Orgeron went 10-25 with the Rebels but said it 'was a great opportunity for me as a young coach.'

Ed Orgeron said he doesn't receive many phone calls from head coaches in pursuit of advice.

The LSU coach speaks with the guys on his staff, goes home, talks with his wife, Kelly, his three sons "and that's about it."

To date, Orgeron said, there hasn't been a flurry of colleagues asking, Hey, Coach, my first big job didn't go as well as I hoped. How do I bounce back?

At least not yet.

No. 1 LSU (9-0, 5-0 Southeastern Conference) is pushing toward its first appearance in the College Football Playoff since its 2015 inception, and with each victory, Orgeron is steadily becoming the poster-coach for how to make a comeback after getting fired.

From mistakenly ignoring Pete Carroll’s coaching advice to one play call at Ole Miss, LSU head coach Ed Orgeron shares the lows that led him to this point in his career. pic.twitter.com/SSSCXRExVP

And as the Tigers roll into Oxford, Mississippi — the town where Orgeron lasted three unsuccessful seasons — it's as good a time as any to remind ourselves how few comeback stories there are.

It's a short, short list of head coaches who won national championships after they were fired from a previous lead job in college coaching.

Since World War II, there have only been two such coaches: Gene Stallings and Lou Holtz.

LSU and Ole Miss have played many memorable games; here's our list of the best five

There isn't another LSU rivalry filled with more memorable games than the Tigers' series with Ole Miss. The ancient rivalry stretches back to …

Stallings was a somewhat controversial hire by Alabama in 1990, since he'd been fired as both the head coach of Texas A&M in 1971 and the Phoenix Cardinals in 1989. But he led the Crimson Tide to a national title in 1992.

Holtz was fired at Arkansas in 1983, then later led a middling Notre Dame program back to a national championship in 1988.

There were two others who failed in the NFL before winning college titles: Pete Carroll was fired by the New York Jets and New England Patriots before winning multiple championships with Southern Cal, and Howard Schnellenberger followed a two-year stint with the Baltimore Colts by leading Miami to a national title in 1983.

Orgeron, a former longtime defensive line coach for Carroll at USC, is the most recent challenger to push against the cold, hard data that says most coaches just don't bounce back to greatness.

How beating Alabama boosted LSU in recruiting: 'We're going to have the best players'

LSU's win over Alabama win pushed the Tigers to the top spot in the College Football Playoff rankings for the first time in school history. It also boosted LSU in recruiting, the lifeblood of a successful college program.

Orgeron said Ole Miss "was a great opportunity for me as a young coach," and suddenly, at 46 years old, he was searching for jobs again after taking a humbling hit.

What had gone wrong? The stories are nearly worn down by now: the micro-management of his coaching staff, the banging of drums up and down hallways, chugging Red Bulls and overzealously challenging players.

Orgeron said again Monday that he learned to change his approach, that he's "very appreciative of my time in Oxford."

Carroll's advice still sticks with him: You're not going to figure out what type of coach you are until you're 50, 51.

"I didn't want to believe that," Orgeron said, "but it just takes awhile. Especially when you get your butt beat, you're going to learn how to get better. And I do believe that that job trained me for the job that we're doing today."

Holtz said something similar in 2016, standing on a stage in front of the guy who once fired him, giving a speech for his induction into the University of Arkansas Sports Hall of Honor.

"I ended up at Notre Dame because of Frank Broyles," Holtz said then, according to the Arkansas Democrat-Gazette. "The point I'm making is, sometimes things are going to happen you don't think might be fair or right, but move on with your life.

"Don't be bitter or eventually your wife will have to hire pallbearers when you pass away because you won't have six friends."

How does LSU beat Ole Miss? Keys to the game include passing offenses, third down

Coming off its biggest win of the season, No. 1 LSU will play Ole Miss on Saturday night inside Vaught-Hemingway Stadium. These are staff writer Wilson Alexander's keys to the game for LSU.

Orgeron said he "grew as a coach through adversity" and he "always wanted to be a head coach again."

That path weaved through assistant coaching stints, aided by the connections of the friends he had in football: Orgeron's one year as defensive line coach with the New Orleans Saints; the time spent in the same coaching position with former Tennessee and USC coach Lane Kiffin, another former Carroll assistant; the eight games as interim coach at USC in 2013, when Orgeron went 6-2 before being passed over for the full-time job.

Those experiences led him through his second interim opportunity, during the 2016 season at LSU, in which he once again went 6-2 — this time, winning the gig amid widespread concern surrounding his record at Ole Miss.

Much of those doubts have been dismissed since then. On Wednesday night, someone phoned into Orgeron's weekly call-in radio show and apologized for once thinking he'd never succeed in Baton Rouge.

Now, with a 34-9 overall record at LSU, Orgeron has the highest win percentage in school history (.791) among coaches who have coached in at least 10 games.

Part of the success, Orgeron has said, has been that he "finally got the coaching staff that I really believe in."

There's defensive coordinator Dave Aranda, the $2.5 million-per-year coach. Then there's the offensive revamp with coordinator Steve Ensminger and first-year passing game coordinator Joe Brady, who at 30 years old has been nominated for the Broyles Award for nation's top assistant coach.

Orgeron said there was humility in the offensive change. At 58, he has coached a long time, but he listens to young coaches in places he's not an expert.

"I hire people who are experts in their position and let them go," Orgeron said on his weekly call-in show Oct. 23.

It's a much different Orgeron who will walk into Vaught-Hemingway Stadium on Saturday for the second time as LSU's head coach.

Rebels coach Matt Luke, a former tight ends coach for Orgeron at Ole Miss, hired the two former head coaches in the offseason. Rodriguez once led West Virginia to four Big East Conference championships before an unsuccessful three-year stay at Michigan that resulted in his firing. McIntyre won the Walter Camp Coach of the Year Award with Colorado before being let go by the Buffaloes program in 2018.

Yes, it's a short list of coaches who can bounce back to greatness.

So far, Orgeron is on his way.

LSU vaults to No. 1 in CFP rankings for 1st time ever after Alabama win; see full list

The College Football Playoff ranking committee has finally seen enough: LSU is No. 1.