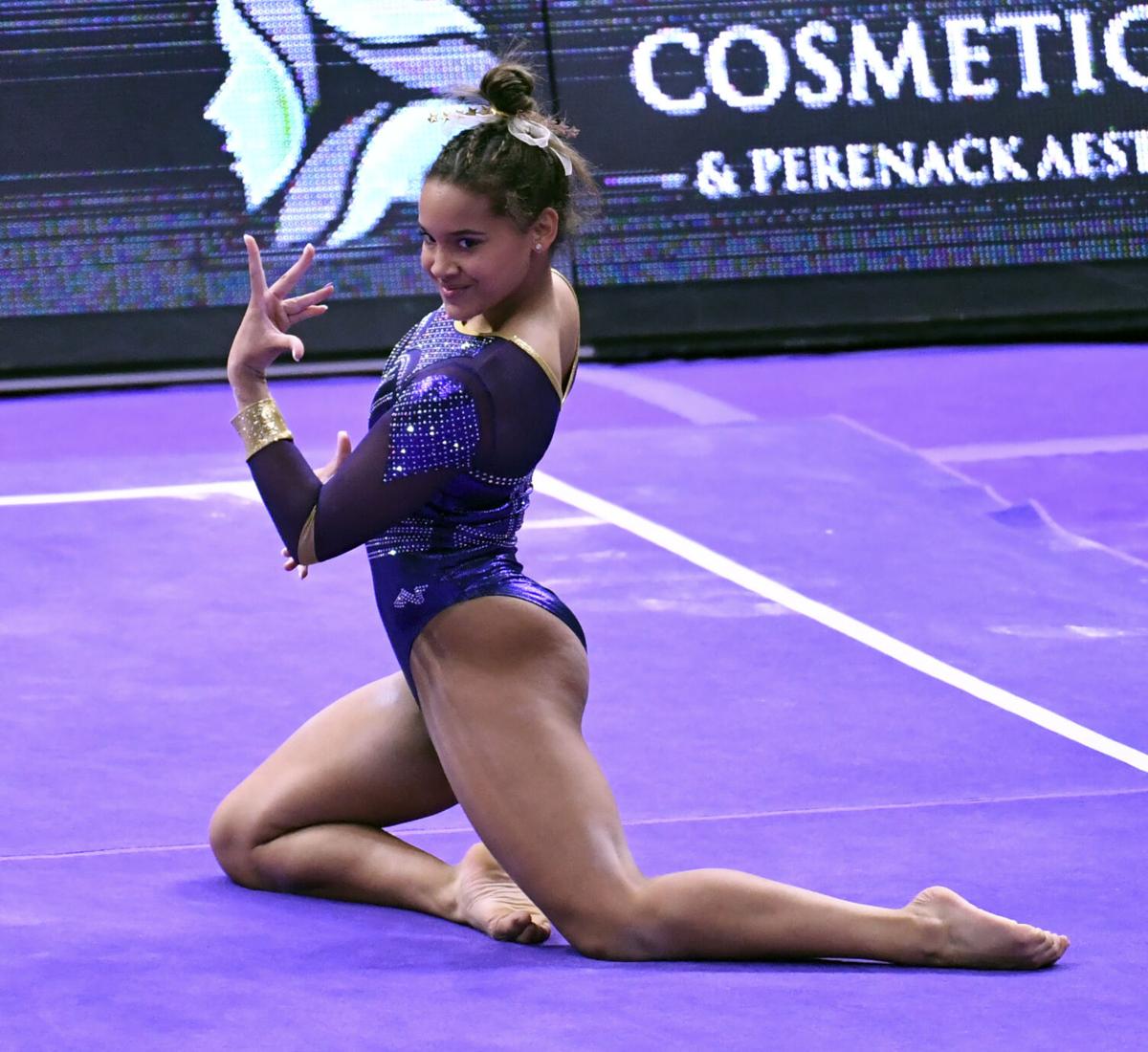 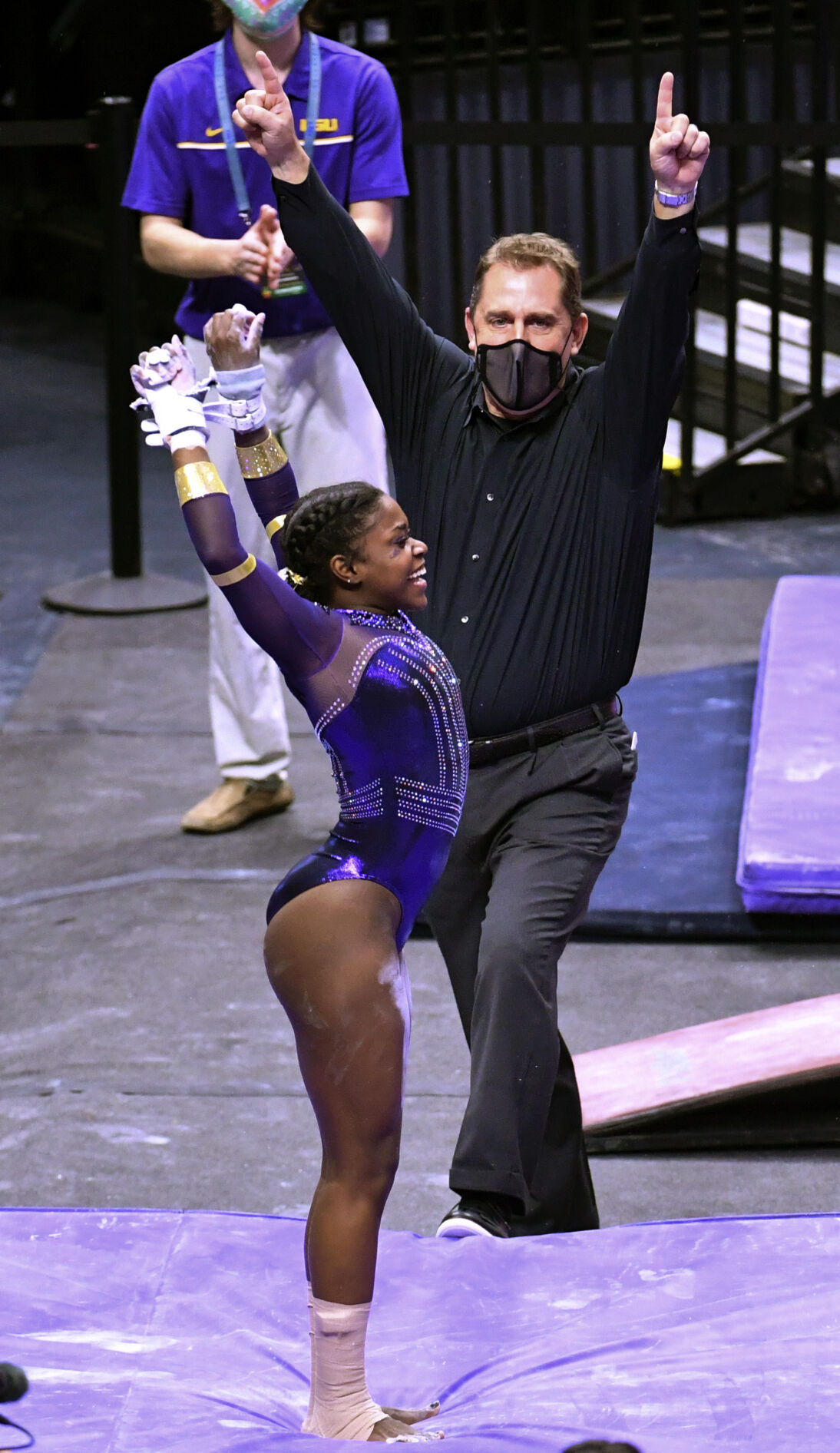 LSU sophomore Kiya Johnson sticks the landing on the uneven bars against Georgia, Friday, January 22, 2021, at LSU's PMAC in Baton Rouge, La. Johnson scored a 9.875 in the event.

LSU sophomore Kiya Johnson sticks the landing on the uneven bars against Georgia, Friday, January 22, 2021, at LSU's PMAC in Baton Rouge, La. Johnson scored a 9.875 in the event.

The LSU gymnastics team rose to No. 2 in the country in this week’s rankings, according to the website RoadToNationals.com.

It’s not a poll but a ranking of each team’s average scores throughout the season. What that’s worth at this point, three weeks into the 2021 campaign, is a matter of perspective for coach Jay Clark.

“It just means through three meets we’re No. 2 in the country,” Clark said Monday. “We don’t put a whole lot more on it than that.

“We don’t talk a lot about rankings. We’ll probably mention them once or twice in a given year. But I do like that (the gymnasts) are aware and where they stand in comparison to other teams. We’ll point out that they’re doing well, but they need to continue to do better and the job is not done.”

The Tigers are ranked in the top six in all four events: second on floor, fourth on balance beam and sixth on vault and uneven bars.

Individually, sophomore Kiya Johnson continues to be ranked No. 1 nationally on floor with a 9.975 average, including a perfect 10 in LSU’s season opener. Johnson only did one event, bars, against Georgia because of an Achilles tendon problem.

Freshman Haleigh Bryant is the nation’s No. 4-ranked all-arounder with a 39.537 average. Bryant is also tied for sixth on floor.

Speaking of that Achilles …

Clark said Johnson “felt better” in the team’s light workout Sunday, though he wants to be prudent with bringing the three-time All-American back as an all-around competitor.

“She wanted to do more (Sunday), and I wouldn’t let her,” he said. “My guess is we’ll see her in at least one more event (at Auburn).”

That would probably be vault, Clark said, adding that floor and beam seem to be the events that tend to irritate Johnson’s tendon problem most.

'Senior night': How LSU gymnastics veterans led the Tigers to an impressive win over Georgia

Fans attending Friday’s LSU-Georgia meet booed loudly when Bryant got a score of 9.85 on floor for what otherwise looked like an impressive routine.

The reason for the surprisingly low score? “We found out a couple of days before the meet I was missing one of the requirements on the middle pass and got a 10th (of a point) off,” Bryant said.

Clark said Bryant fell victim to what he called an ambiguously written rule called “up to the level.”

“They must have a series of three or more acrobatic elements,” Clark said. “That can be something as simple as a cartwheel.”

To avoid the deduction, Clark said Bryant must add a front handspring to her second of three tumbling passes during her floor routine. But because changing a routine takes time, LSU’s coaches decided not to add the front handspring and risk throwing off Bryant’s timing so close to last Friday’s meet.

One of the two floor judges actually gave Bryant a perfect 10, but with the mandatory deduction had to make it a 9.90, he said. The other judge gave her a 9.90 which became a 9.80, giving an averaged score of 9.85.

With an open date week coming after Auburn, Clark isn’t sure he will have Bryant change her routine this week, either, though she sounded confident about the addition not being a subtraction.

“It shouldn’t be much of a problem,” she said.

Clark spoke of his irritation over the ruling considering the exceptional level of difficulty he said comprises most of Bryant’s floor routine. Her first and third passes end with rare double front tumbling elements.

“Haleigh starts and ends with the highest level of difficulty you can,” Clark said. “Her first pass is an ‘E’; her last pass is an ‘E.’ I can’t think of anybody else in my career that started and ended with an ‘E.’ It’s one of, if not the most, difficult routines in the nation.”

When it switched to a league-only regular-season schedule for gymnastics, the Southeastern Conference put in protocols and procedures to deal …