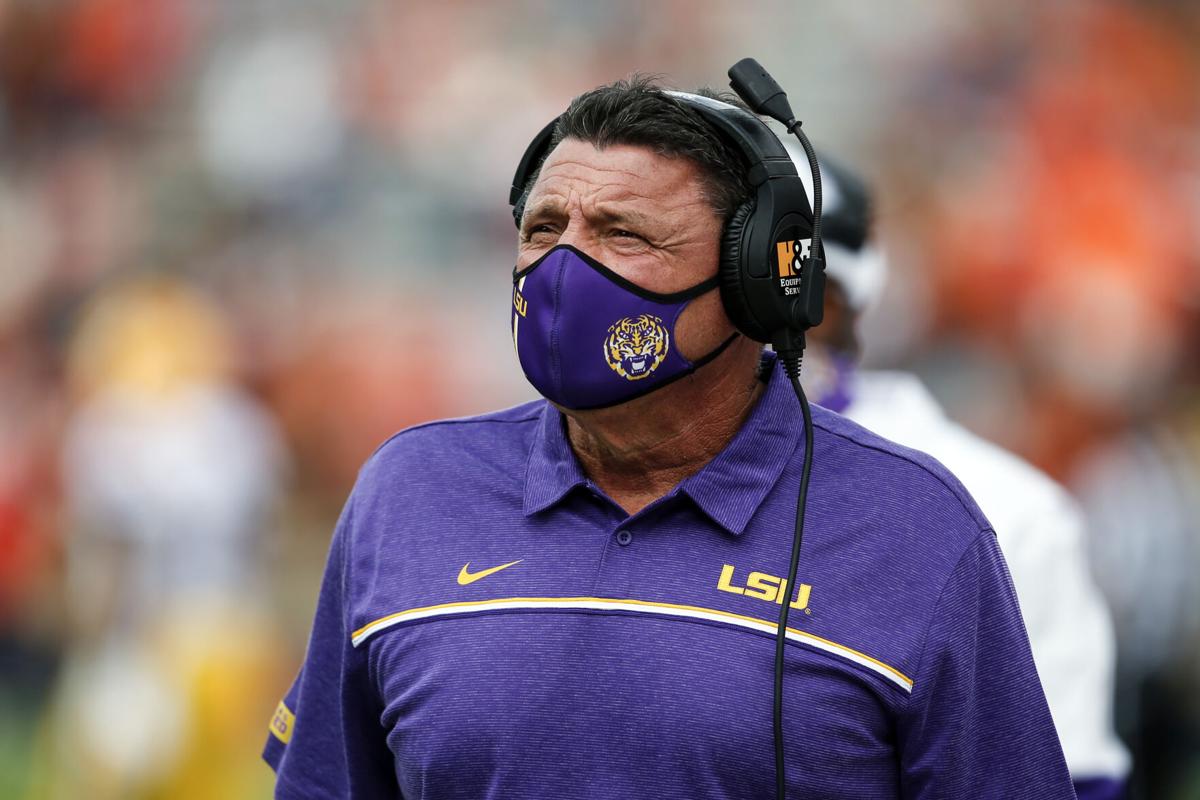 LSU coach Ed Orgeron walks the sideline during the first quarter against Auburn on Saturday, Oct. 31, 2020, in Auburn, Ala. 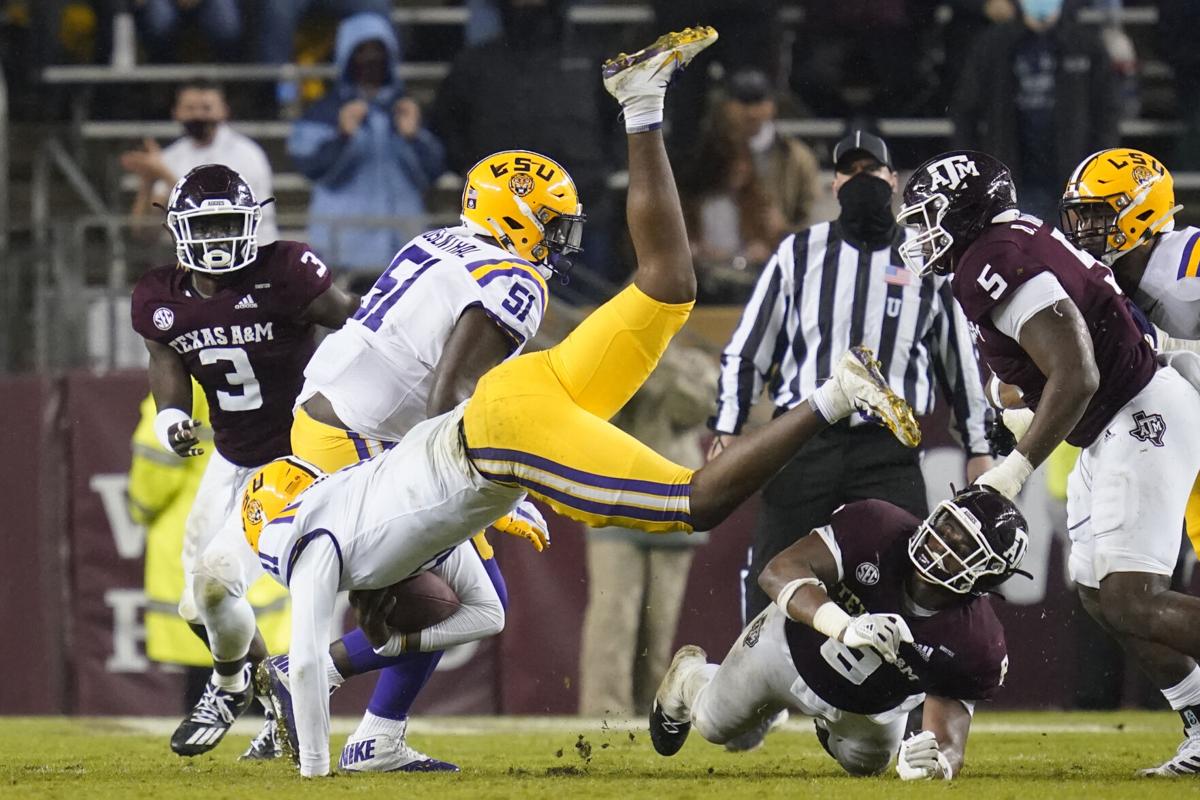 LSU coach Ed Orgeron walks the sideline during the first quarter against Auburn on Saturday, Oct. 31, 2020, in Auburn, Ala.

LSU never felt out of it, but the Tigers never managed to put themselves in a position to win it, either.

Texas A&M salted away a 20-7 victory despite minimal offensive production against a stout LSU defense, in part due to a Tigers offense that had its biggest play overturned in questionable fashion.

LSU coach Ed Orgeron said he disagreed with the officials' decision to overturn TJ Finley's touchdown pass to Kayshon Boutte in the 2nd quarter upon review.

Here's Ed Orgeron on the overturned TD catch by Kayshon Boutte: "It was a big turnaround. We had some spots in the game where we could've took over. Our defense was playing well, we just couldn't punch it in on offense." #LSU https://t.co/fBk2EvmkT0 pic.twitter.com/2jfNKKSKMr

The overturned scoring play came just two plays after LSU's defense forced a turnover in its own red zone as Texas A&M quarterback Kellen Mond attempted to leap for a first down, only to have the ball punched out. But instead of a big play and a deficit trimmed to 10-7 in momentum-building fashion, the Tigers offense was forced to return to the field to run a play on 2nd-and-10.

Finley's next pass was tipped and intercepted, marking a major swing in momentum the opposite direction.

"We had some spots in the game where we could've took over," Orgeron said. "Our defense was playing well, we just couldn't punch it in on offense."

What we learned in LSU's loss to Texas A&M: LSU has gone from heavyweight to lightweight

The Tigers were held off the scoreboard entirely until their final drive of the fourth quarter, well after Finley's night had come to an end. The true freshman completed 9-of-25 passes for 118 yards, but his night ended early following an interception just outside the LSU end zone in the second half as he was hit by a Texas A&M defender.

After the Aggies returned the interception for a touchdown and a 20-0 lead, Orgeron was shown on the broadcast in a heated discussion with his young quarterback as he left the field.

Here's Ed Orgeron on what he was saying to TJ Finley after the pick-6 against Texas A&M: "It was a freshman mistake, but I wanted him to learn that that's not acceptable. ... Just take the sack, but don't throw the football away." #LSU https://t.co/qto2tlgjF0 pic.twitter.com/qfDO9hx5Bc

"Just protect the football. Don't throw the ball away like that," Orgeron said when asked after the game about the conversation. "It was a freshman mistake, but I wanted him to learn."

That was Finley's final pass of the night, and he was replaced by fellow true freshman Max Johnson, who went 14-for-22 for 113 yards in relief. Johnson didn't find much better results until the Tigers' final drive, which went 81 yards in 5:09 and ended in a 3-yard touchdown pass to Terrace Marshall with 38 seconds remaining.

While LSU's offense had a night to forget, the defense held Texas A&M to just 105 yards passing and 2-for-14 on third-down conversions.

With a showdown against top-ranked Alabama next week, today's performance is one that the Tigers' defense will look to keep building on.

COLLEGE STATION, Texas — In the final seconds of the first half of Saturday night's game at Kyle Field, Texas A&M was tentatively probing …

Aggies QB Kellen Mond had a particularly rough day, completing just 11-of-34 passes for 105 yards. Texas A&M is now 6-1 after defeating the Tigers, with their lone loss coming 52-24 at the hands of the same Alabama team LSU faces next week after their previously scheduled matchup was delayed.

LSU's punter didn't speak after the game, but he took to social media to share the type of wisdom only the NCAA's oldest active player can provide.

"Found out that first down markers are metal today," tweeted the Tigers punter over a clip of what left the 30-year-old wincing over on the sidelines.

Found out that first down markers are metal today https://t.co/rsDW8uxhH0

But Von Rosenberg remained in the game that kept him as busy as he's been all season. LSU punted 11 times, with Orgeron praising Von Rosenberg specifically for helping the Tigers avoid multiple incidences where punts could've been blocked.

On one such play LSU's punter received the ball and sprinted to his left before kicking around a rushing Aggies defender to flip the field.

Zach Von Rosenberg has been LSU’s MVP this season and I’m not sure it’s all that close.

This is a 36-yard net punt that I thought for sure was going to get blocked. pic.twitter.com/vFo9a6I0jp

COLLEGE STATION, Texas — This was a sloppy game, an ugly game, a tough-to-watch performance by two offenses that seemed to be as stuck as a tw…