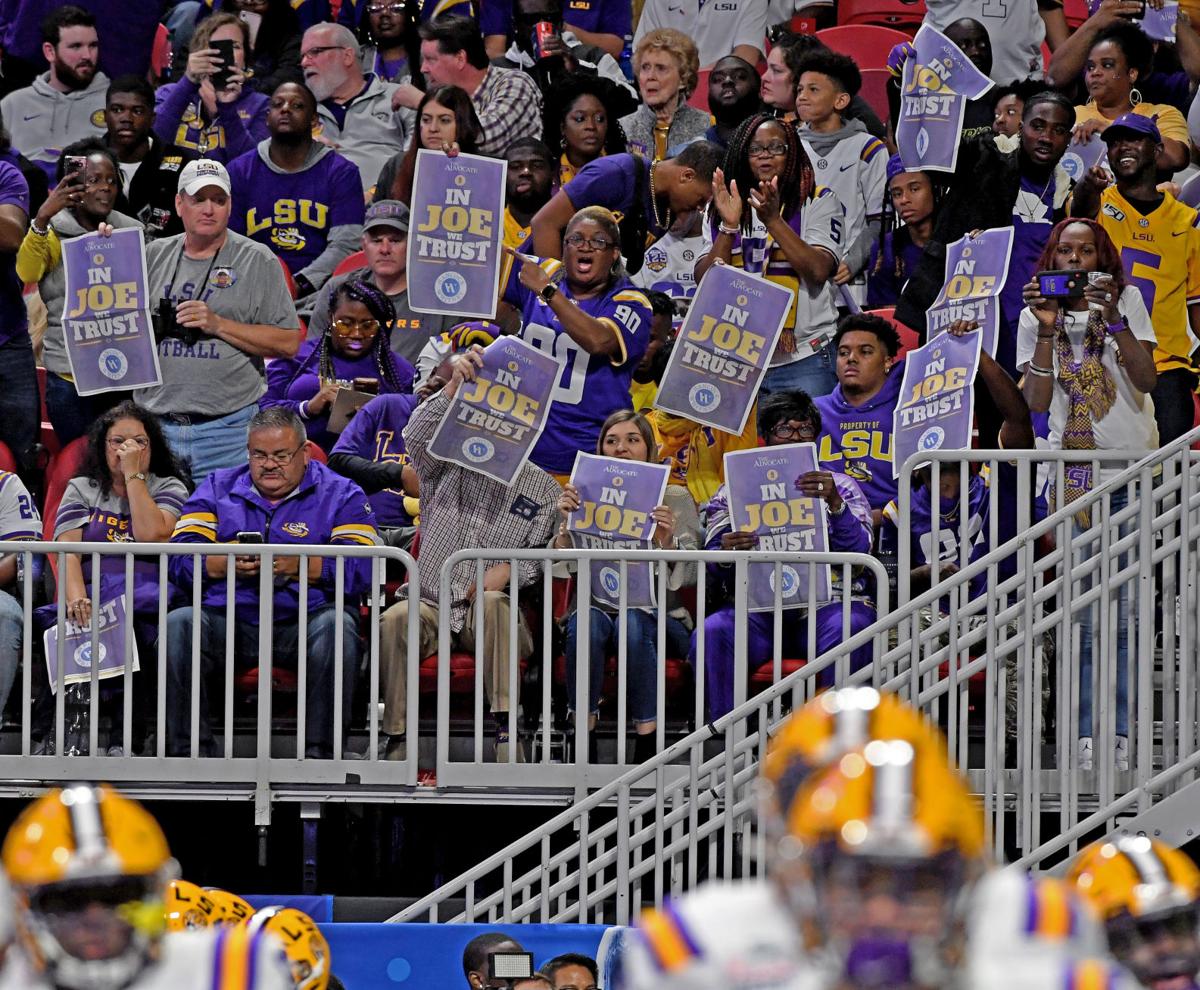 LSU fans hold up 'In Joe We Trust' signs as the team comes onto the field before the first half of LSU's Semifinal Championship Game against Oklahoma at Mercedes-Benz Stadium Saturday Dec. 28, 2019, in Atlanta, Ga. 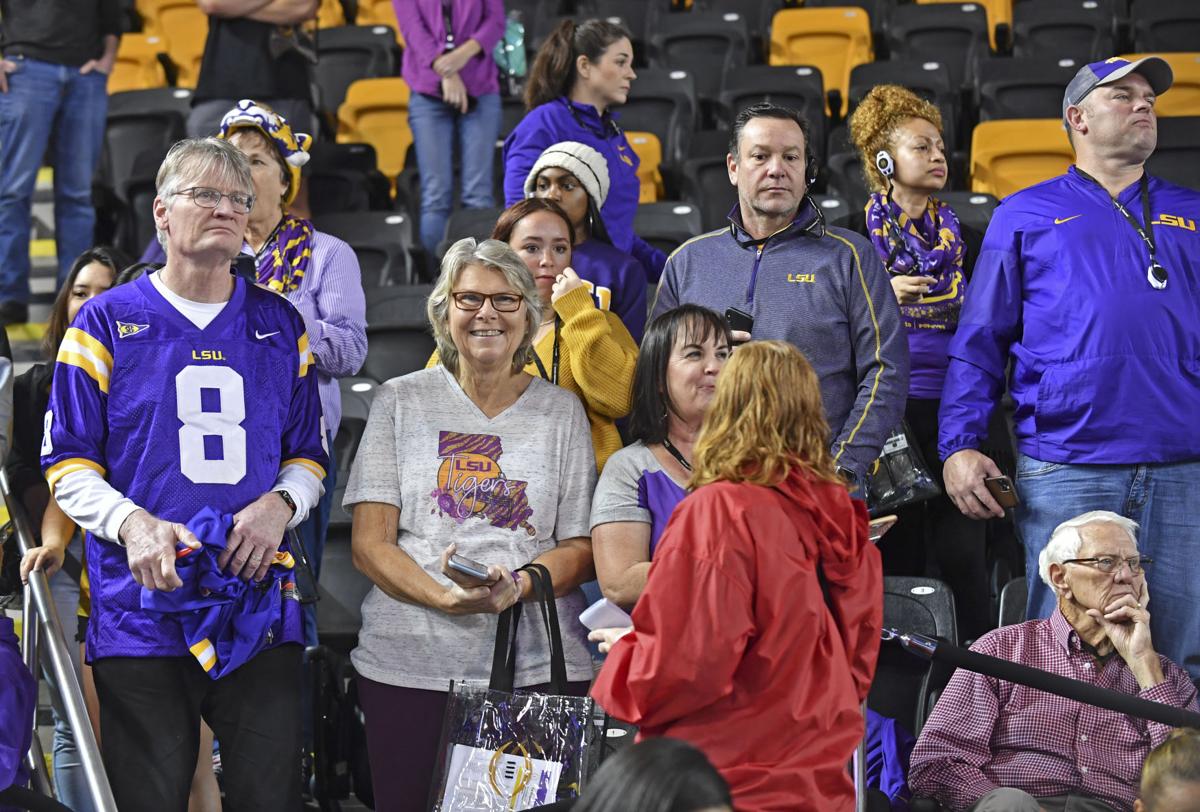 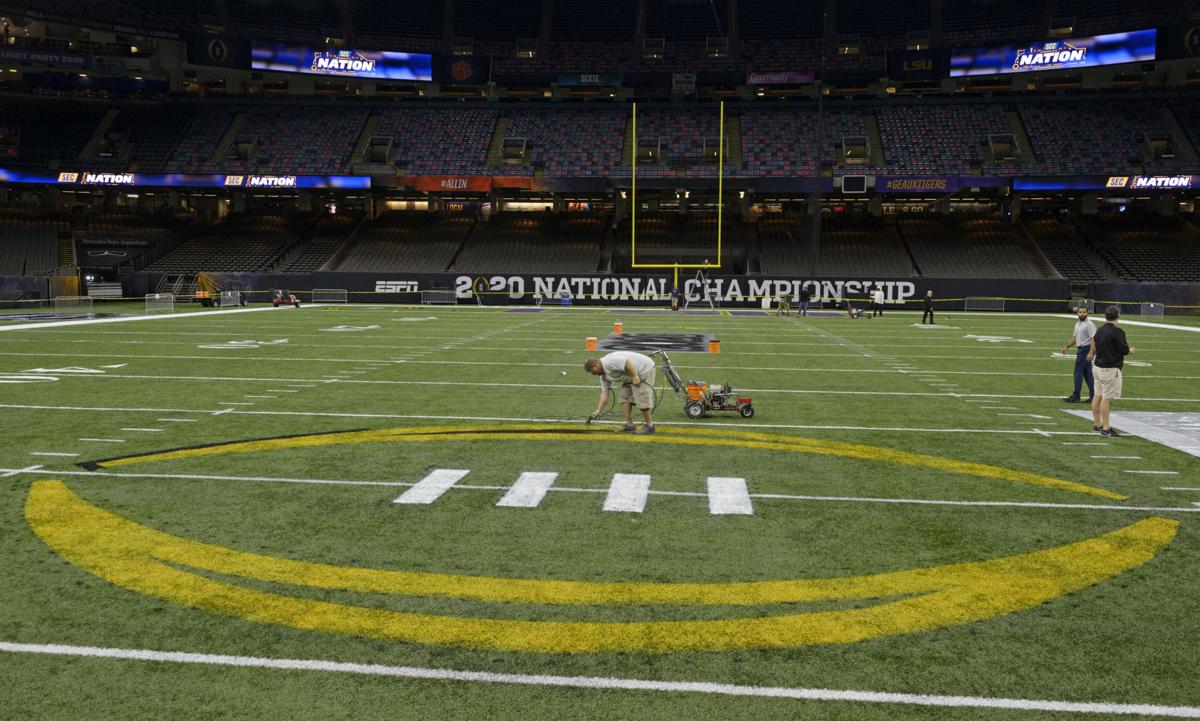 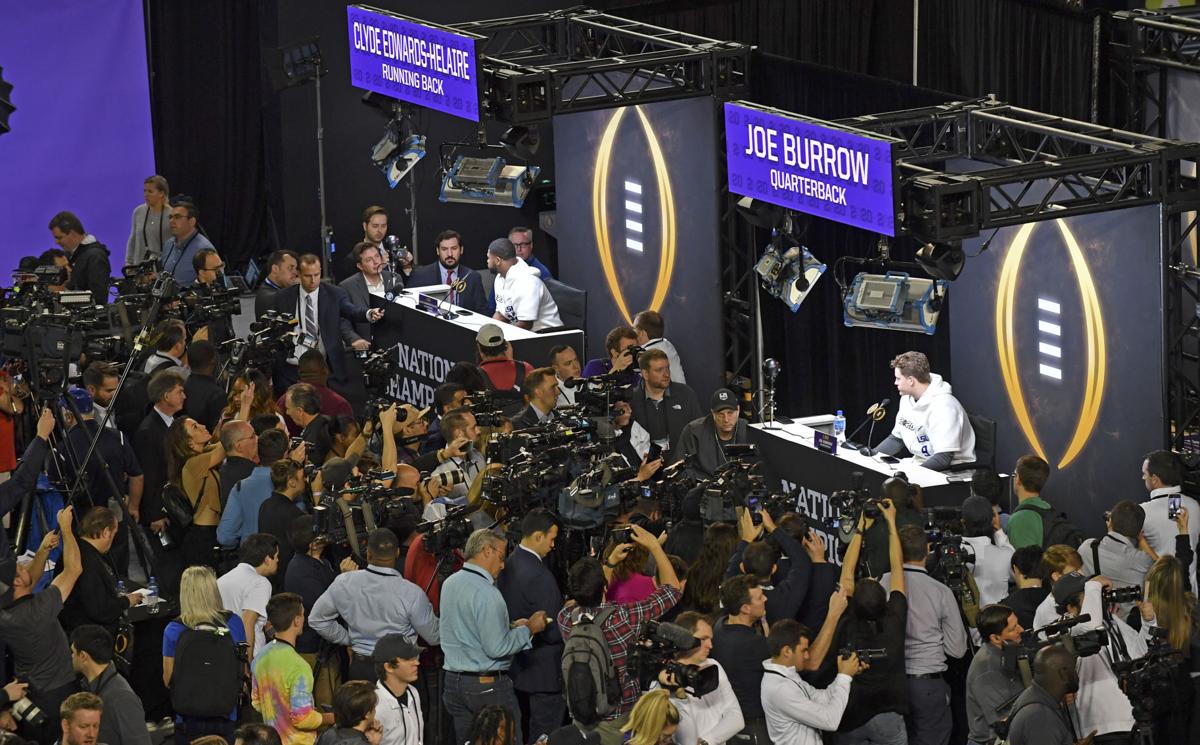 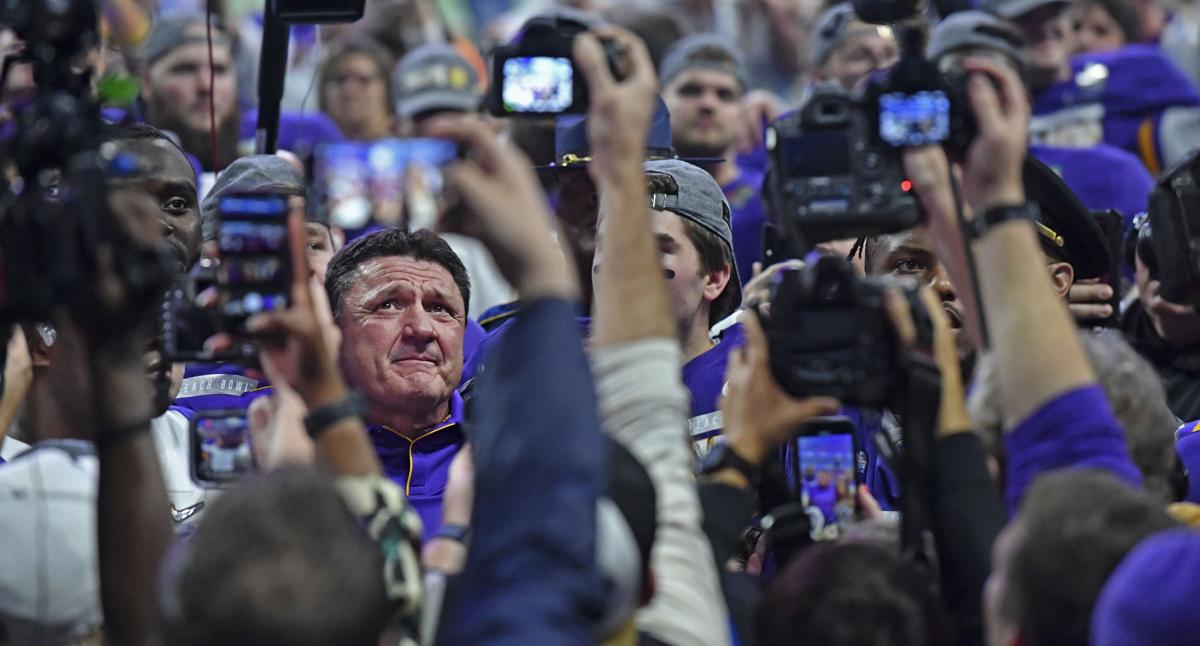 LSU head coach Ed Orgeron looks into the stands as the Tigers sing the Alma Mater following their 63-28 win over Oklahoma in the Chick-fil-A Peach Bowl to advance in the National Championship, Saturday, December 28, 2019, at the Mercedes-Benz Stadium in Atlanta, Ga.

LSU fans hold up 'In Joe We Trust' signs as the team comes onto the field before the first half of LSU's Semifinal Championship Game against Oklahoma at Mercedes-Benz Stadium Saturday Dec. 28, 2019, in Atlanta, Ga.

LSU head coach Ed Orgeron looks into the stands as the Tigers sing the Alma Mater following their 63-28 win over Oklahoma in the Chick-fil-A Peach Bowl to advance in the National Championship, Saturday, December 28, 2019, at the Mercedes-Benz Stadium in Atlanta, Ga.

A ticket to see LSU take on Clemson in the College Football Playoff Championship Game began at comically expensive heights. By gameday they had fallen by enough to change an "LMAO" to an "LOL."

The average ticket price for the game ticked down under $2,000 by the weekend leading up to the game, according to data from TicketIQ, but held steady between $1,927 and $1,965 through Sunday and Monday.

If that figure was to hold, it would mark the most expensive average ticket price ever for a college football championship game in New Orleans and about $100 more on average than the 2012 championship at the Mercedes-Benz Superdome that pitted LSU against Alabama. The average price of tickets for that game landed at $1,854 according to TicketIQ, which tracks and analyzes prices across multiple online ticket marketplaces.

The price would also mark the fourth-most expensive championship of all time, per their data, behind the 2018, 2011 and 2017 title games, respectively.

Average prices ticked up Monday morning from their low of $1,927, but generally continued the downward trend from their high point of $3,362 immediately after LSU defeated Oklahoma in the Peach Bowl. That figure had fallen to $2,707 by the end of Clemson's defeat of Ohio State in the Fiesta Bowl later that evening, and had dropped by over $1,000 on average from its peak to $2,239 by the following Wednesday.

The current average price would be good for the second-highest secondary-market price for tickets for any game in New Orleans history, behind only Super Bowl 47 between the Ravens and 49ers in 2013. The average ticket price for that game clocked in at $2,551, according to data from Seatgeek.

The get-in price for Monday's championship, which represents the cheapest available tickets, followed a similar trend overall. That figure peaked at $1,600 immediately after the Peach Bowl and as of gameday it had been cut by more than half, registering at $789, per TicketIQ, with just under 2,000 tickets remaining across secondary markets.

Additional data from Seatgeek and Stubhub showed similar trends, and also foreshadowed what is expected to be a heavily LSU-leaning crowd about 70 miles from its campus in Baton Rouge.

More than four times as many tickets were sold on Seatgeek to buyers with addresses in Louisiana than in South Carolina, at 32% compared to 7%

Their sales had gone to buyers in 48 states and four countries, with 33% in Louisiana, 15% in Texas and 6% in South Carolina.

The South Carolina sales figure is the same total StubHub tracked to Oklahoma buyers for tickets to the Peach Bowl last month, with the crowd leaning heavily to LSU's side. Projections from VividSeats last week indicated the title-game crowd was likely to be two-thirds LSU fans, with the potential for the split to become more pronounced as late, local buyers scooped up tickets.

Both teams addressed the dynamic of playing in what is essentially a home game for LSU in the buildup to the game. One Clemson player likened the crush of opposing fans, for what's technically a neutral site game, to being in a different country. He was playing off Clemson coach Dabo Swinney's narrative that his squad is taking on a challenge similar to Rocky IV, which featured Sylvester Stallone's iconic boxing character heading to Russia to face off with Ivan Drago.

If Ed Orgeron was aware of the Italian Stallion's Cold War-era mission to Russia to avenge Apollo Creed, he wasn't interested in discussing it…

It's a scenario LSU has seen in reverse already this season, facing off with Georgia in the SEC Championship in Atlanta -- a short drive from the Bulldogs' campus in Athens.

"It's very special for us to drive down the interstate yesterday with a great motorcade. I know our players were looking forward to that," Orgeron said Saturday during media day at Xavier University. "Ever since we knew the National Championship was going to be in New Orleans it was a goal of ours to earn the right to be here, and now we're here and we've got to do something about it."

Ed Orgeron is always ready to talk football, but the LSU coach's eyes light up when he gets the chance to share his most recent dinner menu.

Joe Burrow, Drew Brees finally meet as QB stars align: 'I was a Saints fan because of you'

As Ed Orgeron reflected a day before his team plays for a College Football Playoff Championship, one moment stood out that helped spur LSU to …

LSU coach Ed Orgeron doesn't often respond to jokes made at the expense of his distinctive gravelly and Cajun-influenced speaking style.

Will Shaq be at LSU-Clemson? Will Trump sing? See odd prop bets for CFP Championship in New Orleans

Betting on the score? That's not the fun way to wager on a championship game in New Orleans -- and only legally done with a road trip out of t…

Before each game Joe Burrow does the same thing to get focused. Sometimes it means he even loses consciousness.

Both teams are undefeated, both are called Tigers, both claim "Death Valley," but when it comes to the potential financial prize on the line i…