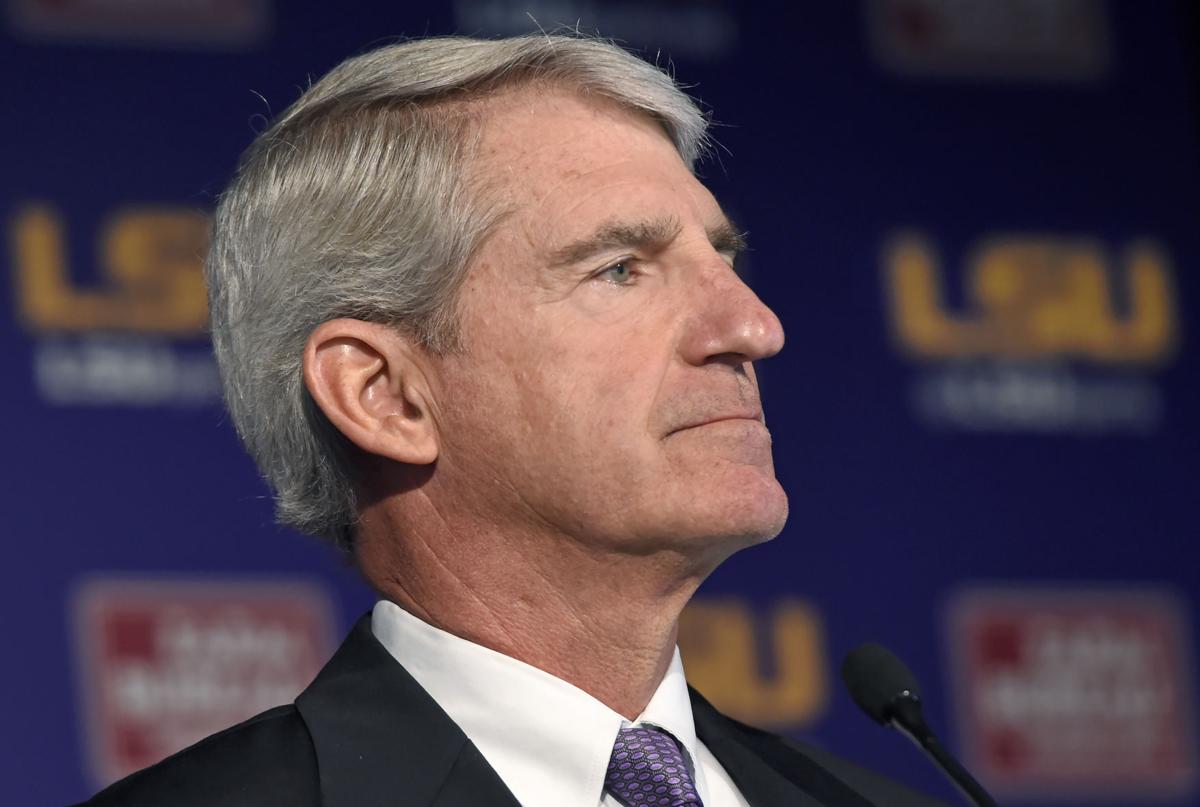 LSU Athletic Director Joe Alleva: 'This is LSU. This is a great place. I really feel confident we will get a very good coach.' 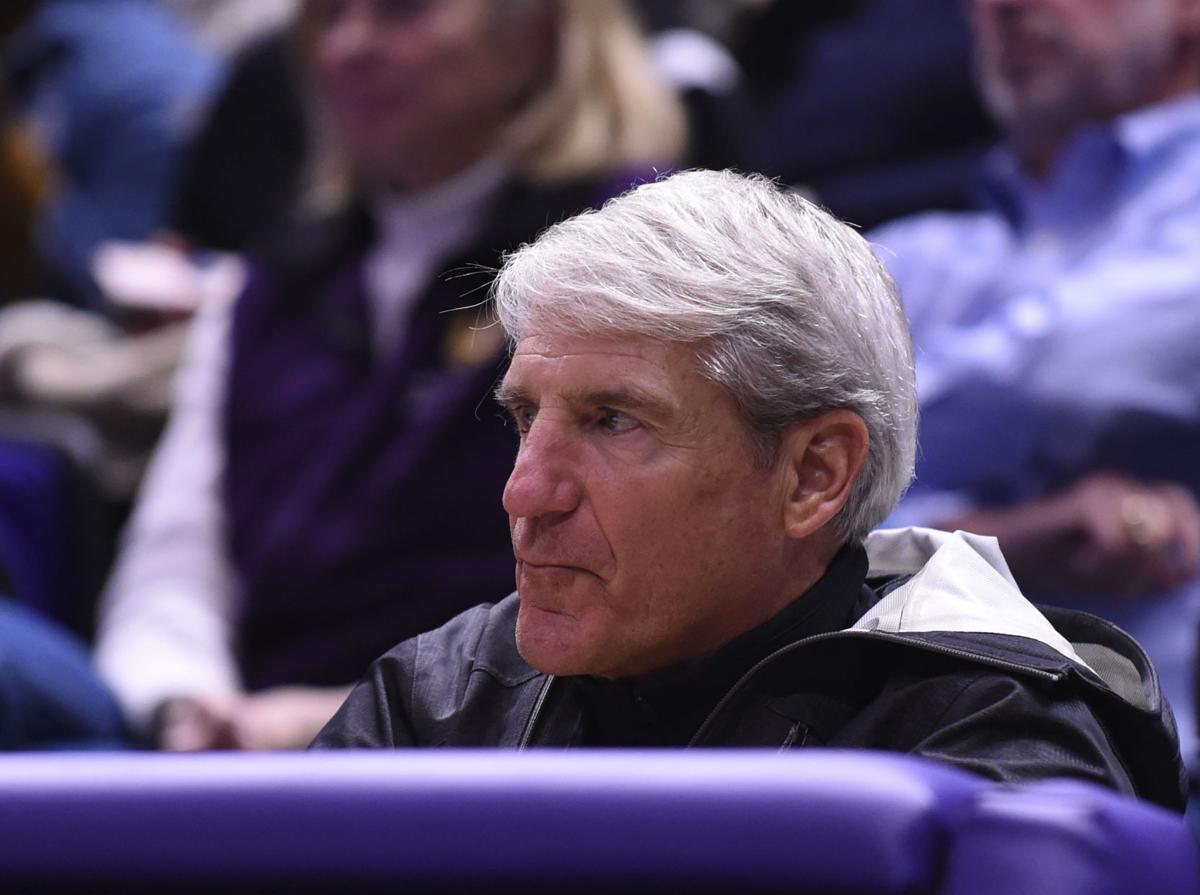 LSU Athletic Director Joe Alleva: 'This is LSU. This is a great place. I really feel confident we will get a very good coach.'

Joe Alleva's tenure as LSU's athletic director is over.

"It's a done deal," said a member of the LSU Board of Supervisors, who asked not to be identified because the university officials asked board members to remain quiet.

LSU confirmed that Alleva will step down.

The decision was done last night at Tuesday's executive session, the member said. Not all board members were involved and some are miffed and some were not supportive.

The end of Alleva's tenure will be cast as his retirement, the member said.

News of Alleva's departure was first reported by the Baton Rouge Business Report.

His resignation comes when the LSU athletic program is embroiled in controversy, tied to a sprawling college basketball corruption scandal that includes a lengthy FBI investigation into the sport.

When asked to comment on the reports, Governor John Bel Edwards said he won't get ahead of the school's announcement and that he will found out when everyone else does. He did, however, recognize the length of Alleva's tenure at the school.

"Joe Alleva has been at LSU I think for more than a dozen years," Edwards said. "He’s put in an awful lot of service on behalf of the university athletic program."

The governor said he won't get ahead of an announcement by the school, and says he'll find out the same time as everyone else. #lalege #lagov https://t.co/9esDmnEshL

LSU baseball coach Paul Mainieri declined to comment on the reports when asked by a reporter.

Paul Mainieri did not want to comment on Joe Alleva at this time. #LSU

On Sunday, men's basketball coach Will Wade returned from a suspension that kept him out of the regular-season finale and LSU's NCAA tournament run to the Sweet 16, ending a nearly monthlong silence between him and the LSU athletic program over his alleged involvement with a middleman accused of funneling bribes to assistant coaches and cash to families of recruits.

Wade met with LSU on Friday, and Alleva said in a statement Sunday that Wade had been reinstated and "answered all questions and denied any wrongdoing."

If Alleva was fired by LSU without cause, Alleva is entitled to 100 percent of the remaining base salary, which is about $650,000. LSU must pay Alleva 35 percent of the balance, or about $227,500, within 30 days of his termination, and the rest will be paid in equal monthly payments over the next 30 months.

Alleva, 65, took over the LSU athletic department in 2008, replacing Hall of Fame baseball coach Skip Bertman, who stepped down after seven years in the same role.

Fan disappointment and frustration surrounded the lack of national championships won at LSU during Alleva's tenure, particularly with the football program.

LSU football had won the 2007 BCS national championship the year before Alleva arrived, and the Tigers have since made it as far as national runner-up in 2011.

The LSU football program dipped into underachievement in the seasons following that title game appearance, and the Tigers went 105-37 (73.9 win percentage) in their 11 seasons in Alleva's tenure.

Most of that was under former head football coach Les Miles, who was fired in 2016 after the Tigers began the season ranked No. 5 and fell out of the Top 25 after a 2-2 start.

Miles was nearly fired the year before. The Advocate reported on Dec. 4, 2015 that representatives from LSU and representatives for then-Florida State head coach Jimbo Fisher were in discussions days before the Tigers beat Texas A&M in what many believed to be Miles' final game as coach. Alleva said then that he only "looked at options" and made "inquiries" regarding a potential new coach.

Speaking at SEC media days in 2018, Fisher, now at Texas A&M, said "unfortunately it just didn't work out at the time" when asked about LSU and Fisher's reported discussions.

In November 2016, The Advocate reported that LSU decision-makers used Fisher's talked-about candidacy as a ruse to quietly negotiate with then-Houston coach Tom Herman and stay ahead of the University of Texas to strike a deal with Herman.

A potential deal with Herman collapsed in part because of reports that surfaced from HornsDigest.com that strongly linked Herman to the LSU job, and LSU leaders blamed Herman's camp for leaking the information and ended discussions, refusing to be part of a bidding war with someone who leveraged LSU's interest into an eventual job with the Longhorns.

By the end of the 2016 season, Alleva had hired interim head coach Ed Orgeron, a Louisiana native, to coach the Tigers full time.

Football has yet to break its eight-game losing streak to Alabama that dates back to 2011, and the streak has continued under Orgeron.

Last year, LSU had its most successful season since 2013 with a 10-3 record and a victory in the Fiesta Bowl, its first New Year's Six bowl game victory in the College Football Playoff era, and the Tigers are paced to be a Top 10 team for the 2019 season.

LSU baseball (2009) and men's golf (2015) are the two programs to win team national championships under Alleva.

Financially under Alleva, LSU was always near the top among other national programs when it came to total revenue.

The LSU Board of Supervisors ran a tight-lipped meeting Tuesday evening, mentioning only "potential litigation" before heading behind closed d…

LSU's profit margin climbed to as high as $56.1 million under Alleva, raking in most of its cash from a vastly profitable football program.

A considerable percentage of those revenues came from the seven neutral-site games the LSU football program played during Alleva's tenure.

LSU made nearly $23 million across those games, including a $4.75 million guarantee for playing Miami in the 2018 season opener at AT&T Stadium in Arlington, Texas.

Controversy stirred around those pay games among LSU supporters who wanted to see top regular season games played at Tiger Stadium instead of on the road.

The issue was among many reasons that helped explain for waning attendance among ticket holders within the past decade.

"Our fans have been anxious for to us to play quality opponents in Tiger Stadium," Alleva told The Advocate in August.

LSU averaged 100,819 in recorded home attendance in 2018, with announced sellouts against Louisiana Tech, Georgia and Alabama, after the school ranked sixth nationally in 2017 with an average recorded attendance of 98,506.

There were multiple major renovation projects under Alleva, which included the 2014 expansion of the south end zone of Tiger Stadium, the construction of a gymnastics practice facility and a tennis center.

Projects are still underway to expand the baseball program's hitting facility, plus a $23 million construction project to renovate the football operations center.

LSU twice finished within the top 20 rankings for the Learfield Directors' Cup (LSU was No. 15 in 2014-15, and No. 18 in 2016-17), an annual award given to universities based on the combined performance of a program's athletic teams.

Now that Will Wade is reinstated, these are the next crucial steps for LSU's basketball coach

After waiting more than a month to address reported FBI wiretaps with LSU and NCAA officials, Will Wade denied any wrongdoing and found himsel…

Alleva received a $50,000 incentive bonus for both top 20 finishes, and this year, LSU ranks 26th nationally in the Learfield Cup standings, sixth among SEC programs.

LSU's athletic programs all maintained a score above 925 in the NCAA's Academic Progress Rate, which calculates the number of athletes that stay in school and are academically eligible, in five consecutive years from 2012-13 until 2016-17, which netted another $50,000 bonus for each year.

The men's basketball program eventually found consistency in its APR score during Alleva's tenure. From 2004-05 until 2011-12, the program recorded an APR score above 925 once (in 2007-08), and its score of 905 in the 2009-10 academic year led to an immediate penalty of one scholarship reduction.