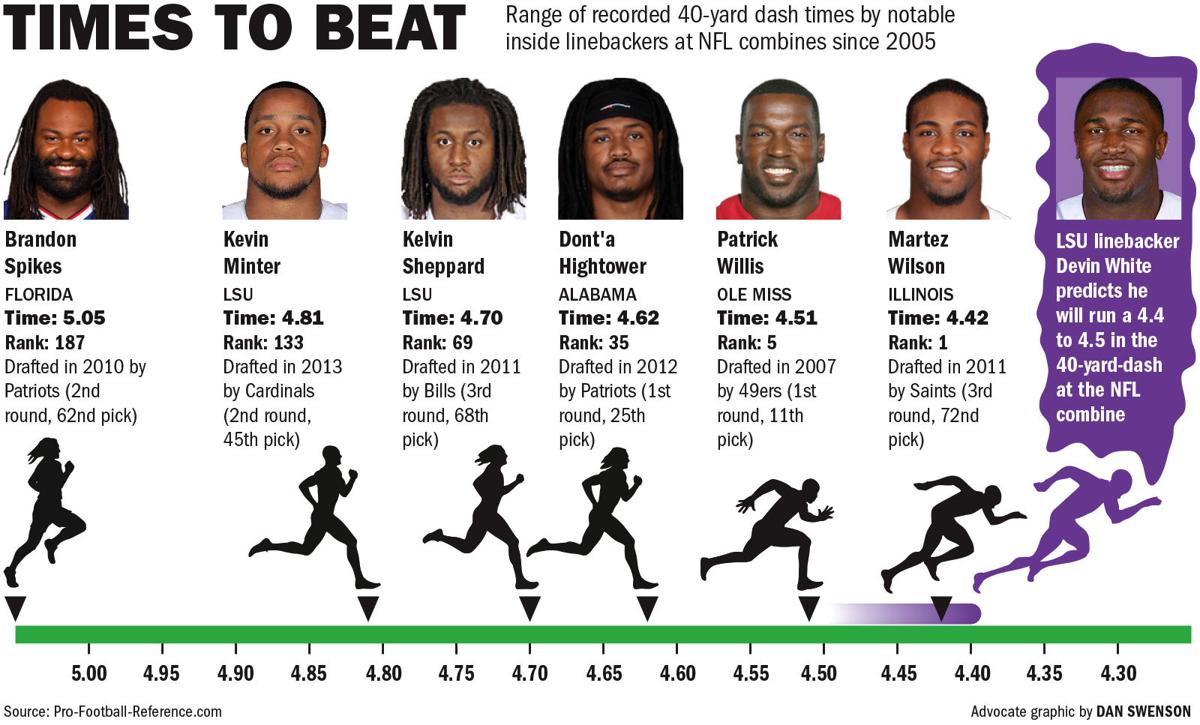 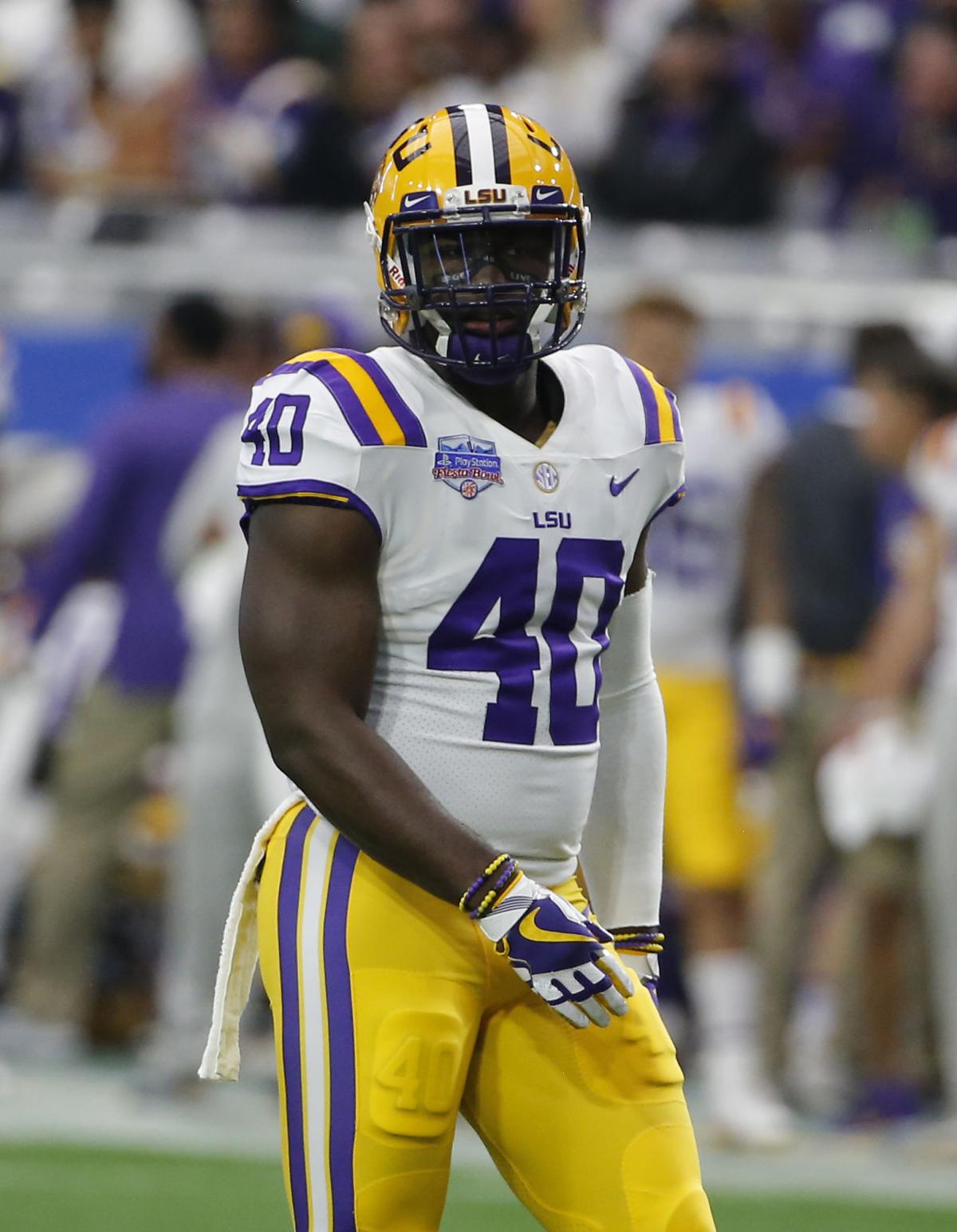 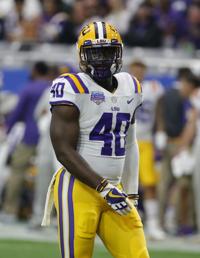 Verge Ausberry pulled out a book the NFL had prepared. Inside were historical facts about the NFL draft, detailing scouting combine averages for the biggest, fastest, strongest players at each position group over the past several years.

Out of the 23 cornerbacks drafted in the first round in the past five years, their average measurements were 5-foot-11, 195 pounds, and they averaged a 4.41-second 40-yard dash.

The average first-round inside linebacker ran a 4.62. Second-rounders? A 4.68. Third-rounders averaged a 4.78.

How did Cole Tracy prepare for NFL combine? Training with Hall of Famer Morten Andersen

When Cole Tracy's plane landed in Indianapolis for the NFL combine earlier this week, he arrived on somewhat hallowed ground.

Just who is that freak of nature?

Devin White of course — the horse-riding, fumble-forcing, Cotton Valley native who won the first Butkus Award in LSU history and is projected to be a top 10 pick in next month's NFL draft.

The comparisons began long before White announced he was giving up his senior year for the draft: Hall of Famer Ray Lewis; Roquan Smith, the Chicago Bears' No. 8 overall pick in 2018. No matter who White reminds experts of, the only question surrounding the two-time All-American seems to be what team he'll end up playing for.

"He's going to be a Rookie of the Year candidate who's going to record a ridiculous number of tackles and explosive plays," NFL Network draft analyst Daniel Jeremiah said.

Former LSU running back Nick Brossette officially ran a 4.62 in the 40-yard dash at the NFL Combine in Indianapolis on Friday.

Sure, White has the leadership and the effort, Jeremiah said. He's got "all the traits a team is looking for in a modern linebacker." But speed of his caliber "is so huge right now at that position."

White will run his 40-yard dash at the NFL combine in Indianapolis on Sunday morning, and he predicted last month on WNXX-FM that he would run a time in the 4.4-to-low-4.5 range.

Inside linebackers hardly ever reach that speed at the combine. The 200 inside linebackers who were drafted since 2005 ran the 40-yard dash in an average of 4.75 seconds, according to data from Pro-Football-Reference.com.

But why is White's speed so valuable, especially in this era of football?

With the proliferation of spread formations and the use of speedy athletes like New Orleans Saints running back Alvin Kamara to create matchup nightmares, NFL defenses have had to find ways to keep their lumbering linebackers from being liabilities.

Former LSU tight end Foster Moreau recorded 22 reps in the bench press at the NFL Combine in Indianapolis on Saturday.

Some teams sub out linebackers for an extra defensive back in nickel packages. Other teams, like the Los Angeles Rams, find a "tweener" to start at inside linebacker.

"When you have linebackers that can't cover, you will get picked on repeatedly," Jeremiah said. "It's hard to hide out there when you have a linebacker who can't cover. To me, you start right there. (White's) going to be able to run and cover and help match up with some of the better tight ends and even some of these backs. It's a huge asset."

Drew Brees was talked about like he was an anomaly.

White's size and speed are what initially made him the nation's No. 5-ranked running back recruit out of North Webster High, according to 247Sports, before he became the anchor of LSU's 3-4 scheme under defensive coordinator Dave Aranda.

"You get maybe two players in a lifetime like that. (Former cornerback) Patrick Peterson was one of them," Ausberry said. "You turn the projector on, and it takes about 10 seconds and you're like, 'OK, we know him. We know what he does.’ ”

White's athleticism helped separate his legacy from the rest of the linebackers in LSU history. No Tigers inside linebacker has run faster a 4.6 in the 40-yard dash at the NFL combine since 2000 — including Bradie James, owner of LSU's single-season tackle record. He ran a 4.71 before being drafted in the fourth round by the Dallas Cowboys in 2003.

Will teams look to emulate the success the Saints had with Taysom Hill?

INDIANAPOLIS — Mike Mayock still remembers taking notes on Taysom Hill ahead of the NFL draft a few years ago.

"It's a position where many great football players have played it through the times," said Ausberry, a former LSU inside linebacker who led the Tigers in tackles twice from 1986-89, a span that included two SEC championships.

And across all the greats, from George Bevan to Al Richardson, only one LSU linebacker has ever been drafted within the top 10: Eric Hill, who was selected No. 10 overall by the Phoenix Cardinals in 1989.

"All the older players get back together again, and you talk about all the great players you see," Ausberry said. "Everybody talks about Devin. Anybody who plays the game of football — you watch Devin come on the field, and everybody wants to take a look at this kid and see what he's about."

And after White's workouts conclude this weekend, the expectations for his professional debut may even heighten.

"You'll see Devin White on Sundays," Ausberry said. "Devin has the potential to be one of those guys that's a Hall of Famer at that position."

INDIANAPOLIS — Two years ago. Sean Payton and the New Orleans Saints had seven draft picks and came away with perhaps the greatest draft class…

Devin White is the fastest linebacker at the NFL combine.

From LSU to Northwestern State, WR Jazz Ferguson making most of his second chance

INDIANAPOLIS — Jazz Ferguson had to flash just two fingers to tell a reporter the number of stop lights in St. Francisville.