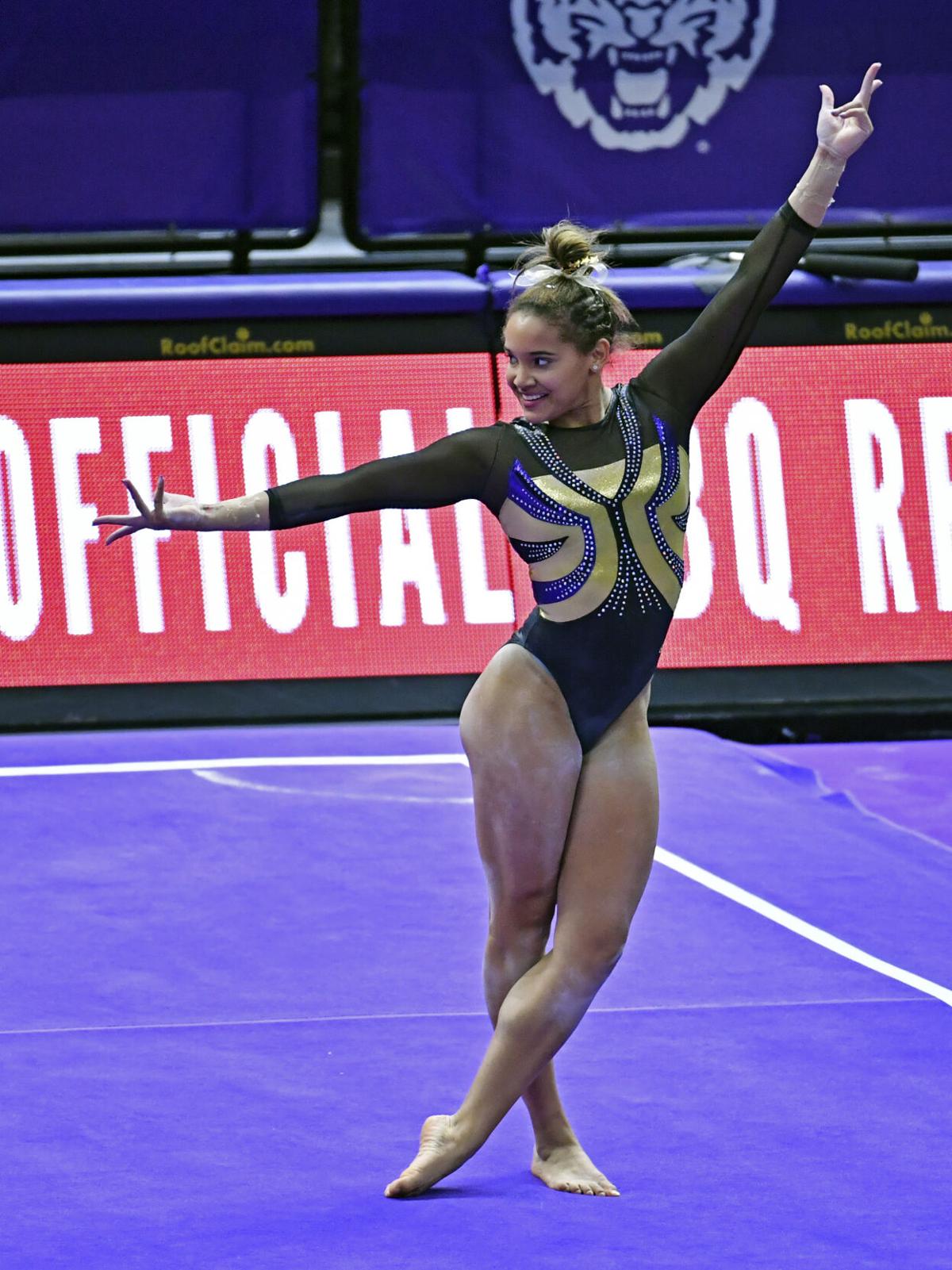 LSU freshman Haleigh Bryant performs her floor routine in the Tigers' season opener against Arkansas, Friday, January 8, 2021, at the Pete Maravich Assembly Center. Bryant scored a 9.975 in the event. 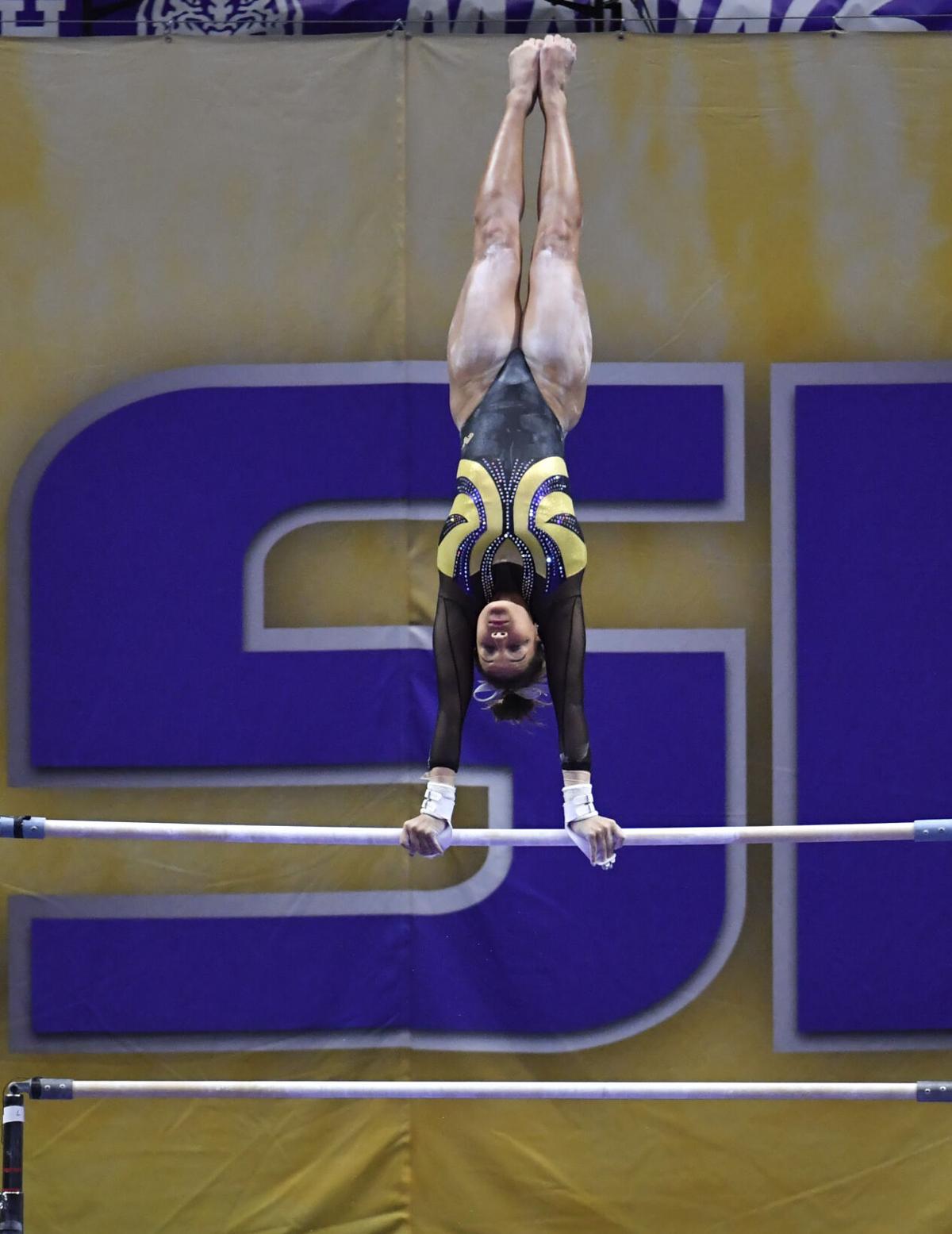 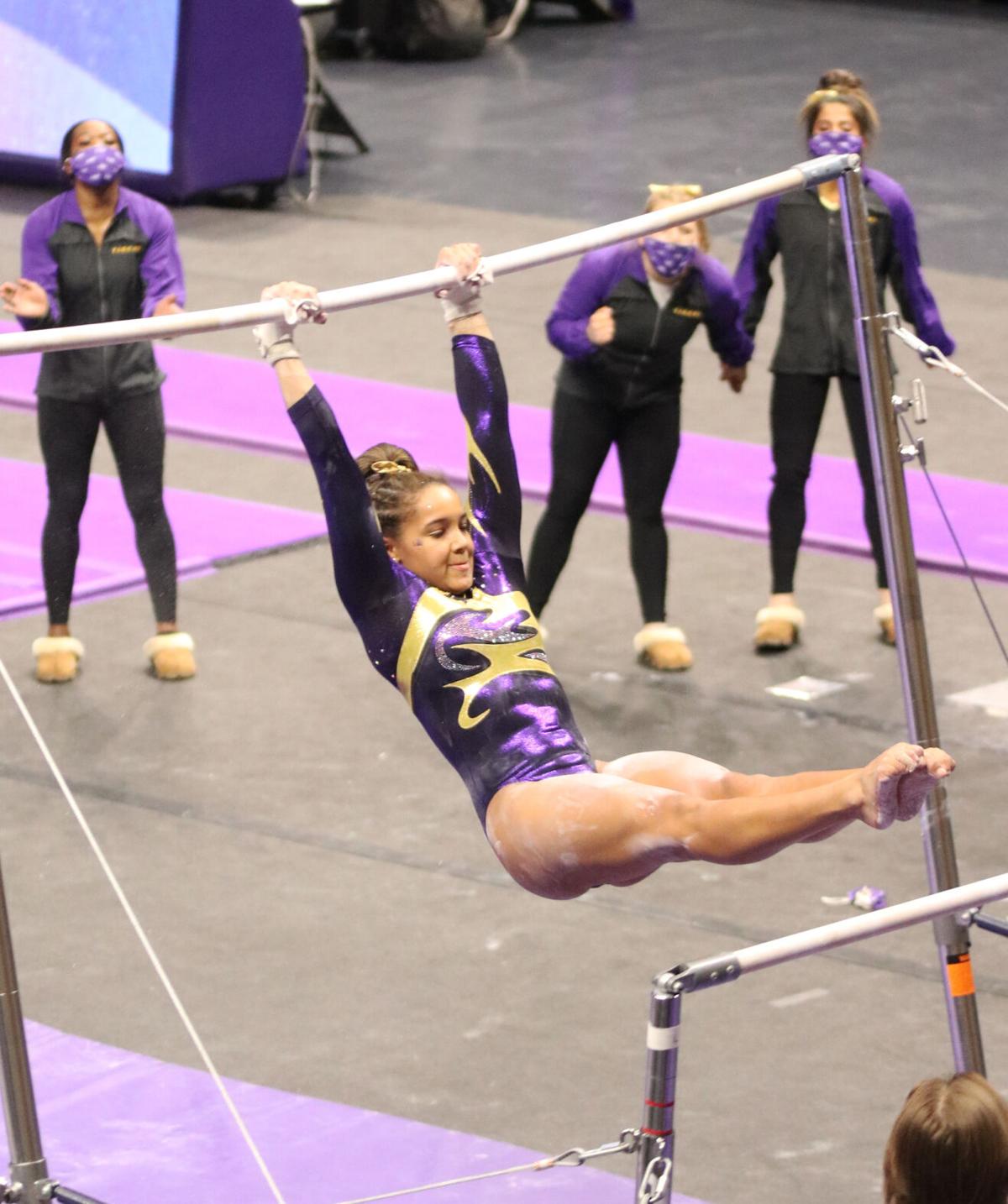 LSU’s Haleigh Bryant does a routine on the uneven bars at the annual Gymnastics 101 exhibition meet in December in the Pete Maravich Assembly Center.

LSU freshman Haleigh Bryant performs her floor routine in the Tigers' season opener against Arkansas, Friday, January 8, 2021, at the Pete Maravich Assembly Center. Bryant scored a 9.975 in the event.

LSU’s Haleigh Bryant does a routine on the uneven bars at the annual Gymnastics 101 exhibition meet in December in the Pete Maravich Assembly Center.

Gymnastics was not a sport on the Bryant family athletic radar. Mom Trisha played softball at UNC Charlotte. Dad Terry played basketball and football well enough in high school to earn some Division I scholarship offers.

So it was just by chance when the Bryants dropped off 3-year old Haleigh at a parents’ night out program when they found, to their surprise, their daughter had an eye-opening aptitude for gymnastics.

“We went to pick her up and they said, ‘Um, you should enroll her,’” Trisha Bryant said. “We signed her up for gymnastics the next day.”

Terry Bryant would coach his young daughter in soccer and basketball, but soon learned she wanted to focus strictly on gymnastics.

“It broke my heart a little,” he said, “but she wanted what she wanted.”

Time has certainly proven young Haleigh chose the right path. Last Friday against Arkansas, Bryant was in action at LSU in her collegiate debut, sharing top honors on vault with a 9.90 in her very first event and closing out the night with a 9.975 on floor exercise featuring her rare, eye-catching double front tumbling passes. The scores helped her earn Southeastern Conference Freshman of the Week honors.

It was the highest floor score by any LSU freshman ever in their opening meet and the best floor score by any freshman in the country last week, eclipsed only by sophomore Kiya Johnson’s perfect 10 right after. Their routines gave every impression that the Tigers could be the beneficiary of a devastating 1-2 floor punch the rest of this season.

That season continues at 7:30 p.m. Friday when No. 5-ranked LSU travels to face No. 6 Arkansas in Fayetteville. The meet will be televised on the SEC Network.

A first away meet could be daunting for a lot of gymnasts, but Bryant has certainly taken her game on the road before. She is the only two-time winner of the all-around title in the Nastia Liukin Cup (named after the 2008 Olympic all-around champion), winning in 2018 in Chicago and 2020 in Milwaukee.

Bryant came into LSU rated by one gymnastics publication as the top freshman on floor and vault. Part of the reason is her exceptional front tumbling skill on those events, which she also showed Friday night on her dismount on uneven bars.

The degree of difficulty certainly catches judges’ attention, especially with the skill to which Bryant performs.

“I’ve been aware of Haleigh Bryant since I was at Georgia,” LSU coach Jay Clark said. “She was taking visits in the eighth grade.

“I knew there was a tremendous amount of power and upside. The only drawback was she didn’t (flip) backwards. That sends off alarms in your head. But when you saw the overall athleticism and progress she was making, you knew there was so much there. That’s world-class skill that double front. Not many people are doing that in the world. That’s a hammer (scoring-wise).”

“I’ve wanted to go to come to LSU ever since I watched my first collegiate gymnastics meet on TV,” she said. “I said, “I want to go to LSU and nowhere else.’”

Despite her parents’ urgings, it was the only school she visited.

“She’s pretty much an independent thinker,” said Terry Bryant, who with wife Trisha plan to attend all of LSU’s meets this season. “As parents you want to make sure what she wants is realistic. We told her, ‘Other schools are looking at you, let’s take a look.’ But she didn’t want to. She was always focused there (on LSU).”

Still, there were the high school years to get through. Bryant attended William Amos Hough High School in Cornelius, North Carolina, a suburb in the heart of NASCAR country just north of Charlotte.

Unlike a lot of gymnasts who are strictly home schooled, Bryant wanted the regular school experience as much as possible. After being home-schooled in middle school, she would attend Hough for three classes in the morning, leave around lunchtime to be in the gym from 1-6 p.m., then head home for two online classes and homework after that.

“I’m very thankful for my high school,” Bryant said. “This past semester I had to do everything online (at LSU), so I was kind of used to it.”

That didn’t keep Bryant from recording a 3.8 GPA in the fall, according to her dad. Last week was the first time she had an in-person college class.

As for her first college meet, Bryant went back and critiqued herself on video.

“I definitely saw things I can improve on,” she said, “but there were also some really good points.”

Of that there is no doubt.

“She seems to have poise beyond her years,” Clark said. “That’s a testament to her parents. They’re great people and extremely supportive.”

Friday’s meet will be the first to count toward the SEC regular-season standings for LSU and Arkansas. Last Friday’s meet was added when the Southeastern Conference went to a league-only eight-meet schedule because of coronavirus restrictions, with each school facing one opponent twice.