KNOXVILLE, Tenn. — Linebacker Devin White was the last player out of LSU's locker room after halftime. He walked through the tunnel, out onto the field and saw a wall of wind-driven water.

His first thought upon seeing this might surprise you.

"I just knew it was going to be a great night for us on both sides of the ball," he smiled.

When the weather got the nastiest, so did LSU.

It took driving wind and heavy rain to spark the Tigers to a 30-10 win over Tennessee on Saturday night, an eventual throttling of a team with no permanent head coach and zero Southeastern Conference victories.

Normally a hindrance to an offensive unit, the elements willed coach Ed Orgeron’s bunch to an eighth victory in his maiden season. The Tigers (8-3, 5-2 SEC) have won at least eight games in 18 straight seasons, the longest such streak of any Power 5 program in the nation.

"Storm hit, and I thought the storm fired them up. (Like) little kids playing in the backyard, they got excited," Orgeron said. "It charged them up."

They claimed this one despite missing two defensive starters and miserable weather conditions as a storm system swept across Tennessee. It brought the worst weather early in the third quarter, as rain and wind slammed into Neyland Stadium.

The result: LSU's defense held UT to 106 second-half yards and its offense scored two third-quarter touchdowns, doing most of the damage on the ground to secure a second straight victory ahead of the regular-season finale against Texas A&M next Saturday.

Quarterback Danny Etling completed 11 of his 15 attempts, many of them in driving rain and while battling what Orgeron referred to as a "slight injury" on his throwing hand. He was most effective on the ground. He ran for about 35 yards on six designed runs, scoring on a 13-yarder late in the second quarter and picking up a third-down conversion on a 4-yard run in the third quarter.

"It was not something we were always thinking, but it kind of happened," he said of the designed runs. "It was extremely windy and swirling. We had a different game plan going in but once we saw the conditions, we had to adjust."

The conditions were brutal, from start to finish. Gusts during pregame warmups, upward of 30 miles an hour, tilted the south end zone goal posts at Neyland Stadium.

Intermittent rain showers turned into hurricane-like conditions in the third quarter. Winds were so strong that they moved the football before several snaps.

KNOXVILLE, Tenn. — For the third time in the past four games, LSU followed a familiar recipe for success Saturday night.

"That’s what football is about, man," running back Derrius Guice said afterward. "We could have all cried and moaned about it or kept pushing and fighting. We got together to try to huddle up to stay warm a little, but that didn’t work. So it was like, ‘Screw it. Jump up and run around and maybe you’ll get warm. Go out there and go!’"

Guice finished with 96 yards, becoming just the fifth player in school history to have consecutive 1,000-yard seasons. Darrel Williams chipped in 68 yards, too, averaging 9.7 yards a carry. Meanwhile, Dave Aranda’s defense stopped the Volunteers (4-7, 0-7) on three fourth-down attempts in the second half, doing it without edge rusher Arden Key and inside linebacker Donnie Alexander, both left at home battling injuries.

Tennessee ran for just 38 yards and only 11 in the second half.

"We are going to play in any element," nose tackle Greg Gilmore said. "We’re not going to blink. I embraced it. They have to run the ball. That’s our type of football. We’re the best front seven in the SEC. That’s how I feel personally."

This one wasn’t pretty — the conditions or the football.

KNOXVILLE, Tenn. — Derrius Guice didn’t have his greatest game Saturday night, but it was still an evening to remember for LSU’s junior running back.

LSU struggled to run the ball, especially in the first half, something that surprised its coach. The Volunteers entered as the nation’s fourth-worst rushing defense, allowing 256 yards a game. The Tigers had 91 yards rushing at halftime, but more than one-third of those (36) came on one run from Williams.

During a halftime interview, Orgeron said, “We couldn't run the ball. Thought we could going into the game.”

The Tigers came alive when the weather got messy in the third quarter.

The teams returned form the halftime locker room to be greeted by heavy winds and gusts of 30 miles an hour, as a fast-moving front hit the Great Smoky Mountains area.

"I almost turned around," Gilmore joked about his thoughts after the half.

"I saw a lot of rain. I almost got knocked over by the wind. It was a rough day," said 314-pound center Will Clapp. "We live in that type of stuff. We let it fire us up and not let us down."

The Volunteers muffed the opening kickoff of the second half, penning them inside their own 5, and the Tigers defense forced a punt to set up Guice and Co. for a 50-yard touchdown march.

Guice broke a bevy of tackles in seven carries, snapping off a 12-yarder and scoring on a 3-yarder. The Tigers ran it nine times on that drive, as Etling picked up a first down with his 4-yard run on third-and-3 and Williams ripped off a 12-yard carry, too.

Later in the third, the Tigers defense stuffed the Vols on a fourth-down attempt at their own 21-yard line, and LSU’s offense took advantage on the hands and legs of another running back, Williams. He caught a 15-yard pass and ran in from the 6-yard line to make it 30-10.

Key takeaways from LSU vs. Tennessee: Tigers survived the Vols and the weather 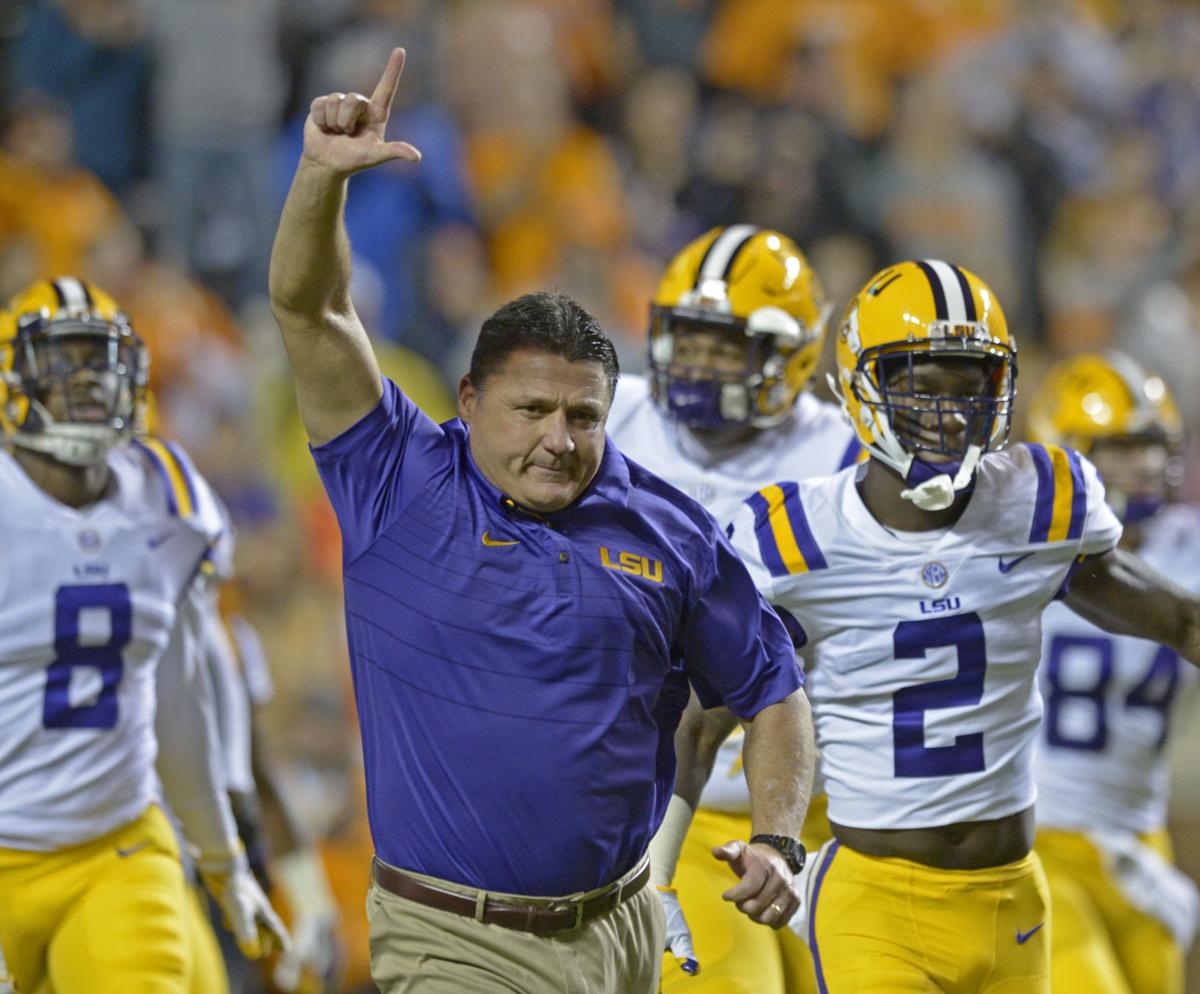 LSU is a better team than Tennessee. OK, you knew this before the Tigers and Volunteers even kicked off Saturday night. How about this: LSU was such the better team it was able to overcome its lack of offensive punch, defensive lapses and kicking woes to easily hold off the Volunteers 30-10. Tennessee carried the fight to LSU under interim coach Brady Hoke, but the Vols were winless in SEC play coming in for a reason. 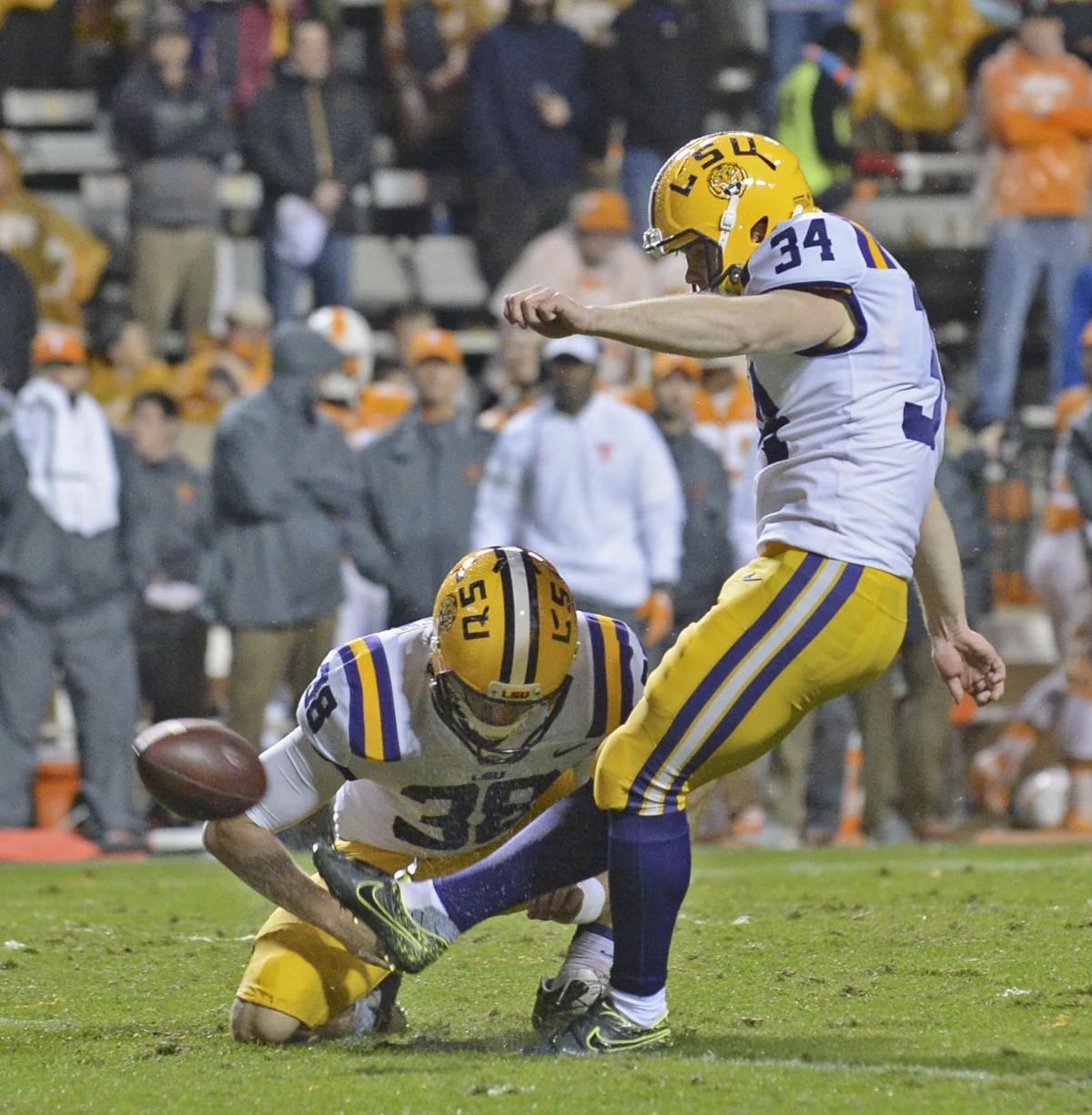 Connor Culp. You don’t think about much place-kickers until a game-winning kick is needed or a bunch of misses rear their ugly head. For the second straight week, Culp missed multiple kicks after a string of successful games. The adverse weather conditions played a part, but Culp missed two field goals and an extra point after missing two PATs against Arkansas. Afterward, Ed Orgeron announced that Jack Gonsoulin will be LSU’s kicker against Texas A&M. 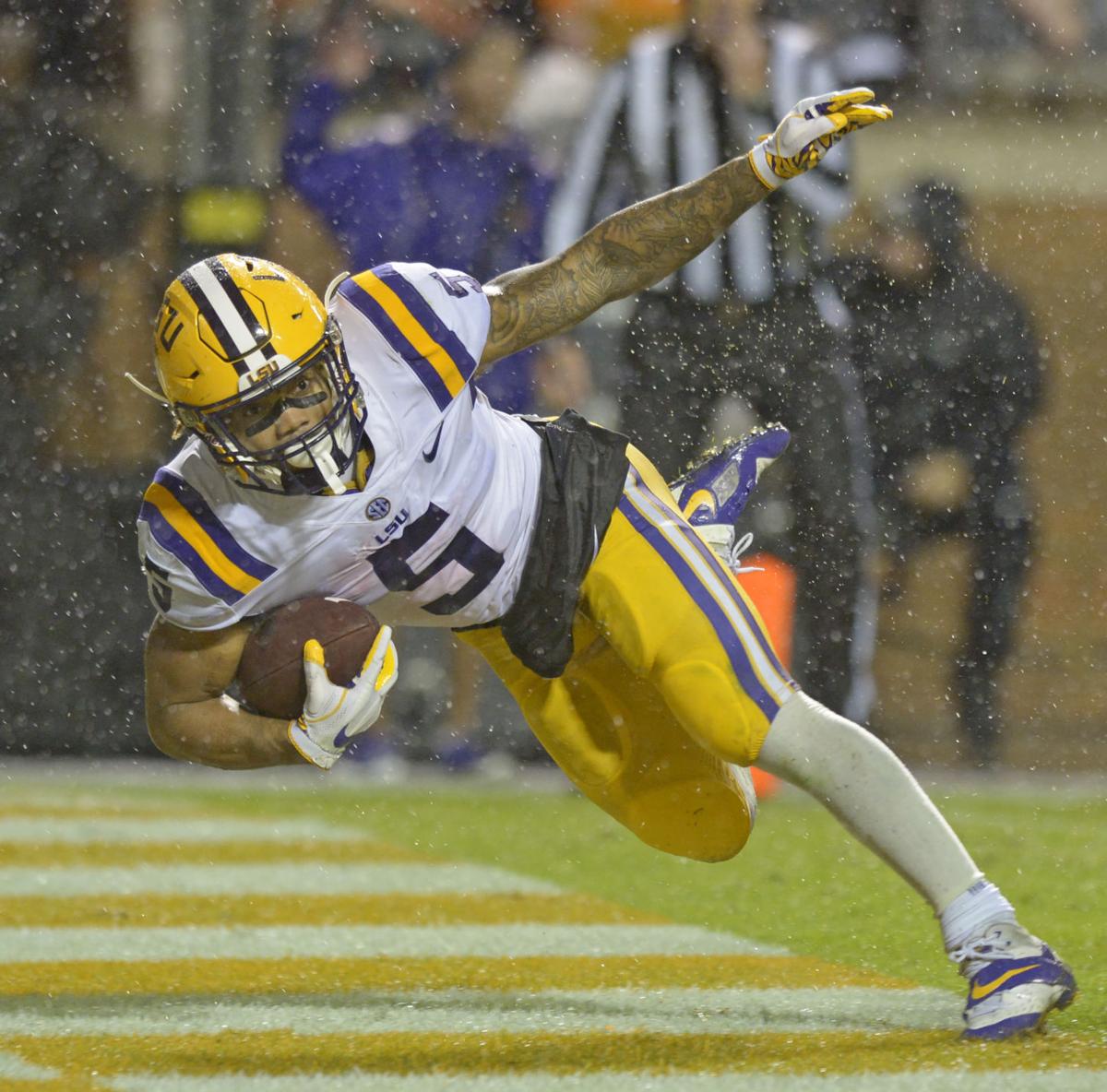 This wasn’t an LSU victory for the ages. It was just a win, win No. 8 for a Tigers team that began 2017 with shortcomings and deficiencies and is still haunted by some of them. That said, the wind, the rain and the road could have conspired to make LSU a shocking upset loser. That didn’t happen by a long shot, but there will be plenty to work on leading up to Texas A&M.

Tennessee held them to three-and-outs on their first four possessions. They gained just 17 yards on nine plays in the first quarter, and their first two scores came after a pair of muffed punts from Marquez Callaway. Russell Gage recovered the first at the Vols 15, leading to a 30-yard Connor Culp field goal, and Michael Divinity recovered the second at the UT 19. Williams cashed in with a 10-yard touchdown run.

So what happened? A storm hit.

"We rounded the corner coming after halftime and you saw it pouring down," tight end Foster Moreau said. "Everyone was jacked up."