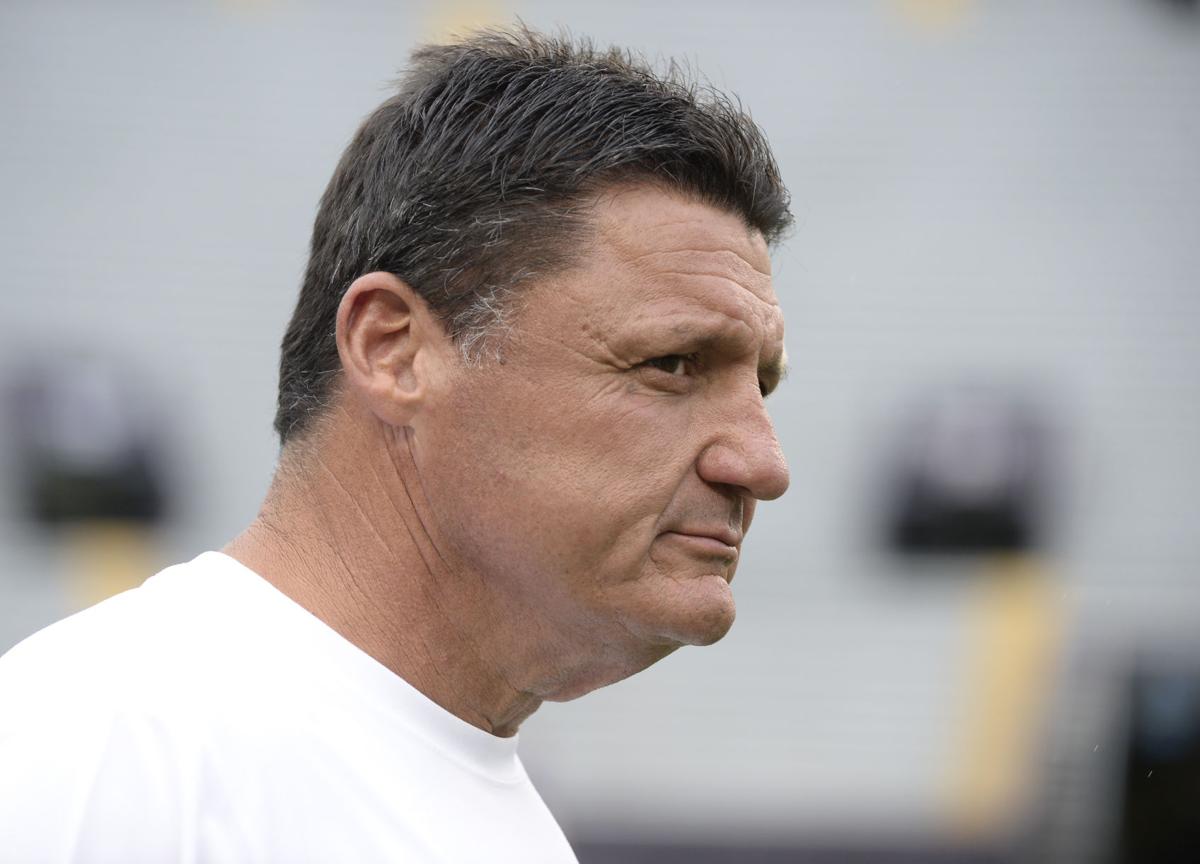 LSU held its first satellite camp in Bossier City last June. Parents and reporters were relegated to a spot outside of the black gates encircling the camp.

LSU held its first satellite camp in Bossier City last June. Parents and reporters were relegated to a spot outside of the black gates encircling the camp.

A small college football coach in Mississippi reported LSU and coach Ed Orgeron to the NCAA on Thursday for using its influence to drive out non-Louisiana universities from attending satellite football camps in the state and limiting opportunities for prospects.

Orgeron, meanwhile, insisted Thursday that LSU’s on-campus camps and its partnership with camps at Southeastern Louisiana last week and Tulane on Friday give “great opportunities” to Louisiana players.

This is the latest chapter in a story that has swept through college football over the past month, kickstarted by a Sports Illustrated article published May 18. The story linked LSU to the cancellation of agreements Southeastern Louisiana and Tulane had made to host Texas, Texas A&M and Michigan during satellite camps on their campuses in Hammond and in New Orleans.

LSU used its political clout in the state to keep those major conference programs from attending those camps, according to the Sports Illustrated story. Southeastern and Tulane replaced the non-Louisiana programs at its camps with in-state schools, namely LSU.

Hal Mumme, the former University of Kentucky and Southeastern Louisiana coach who now leads Jackson, Miss.-based NCAA Division III Belhaven University, contends LSU, a Division I powerhouse, used its power to twice cancel a camp this week that Belhaven was set to host with Texas and Houston at high schools in Baton Rouge and in Hammond.

In response, Mumme contacted the NCAA about the ordeal, he said in an interview with The Advocate on Thursday morning.

“I had our compliance director call the NCAA and file a complaint,” Mumme said. “I don’t think as coaches we should be in the business as limiting opportunities for kids. That’s what they’re doing down there.

“Apparently, if you’re not from Louisiana, you’re not allowed to look at their players at camps, which is absurd,” he continued. “There are 11 schools in the state that play football. There’s not enough scholarships to go around to everyone in the state.”

Mumme does not know what NCAA rule, if any, LSU violated. He hopes the governing body of college athletics will at least “look into” the matter.

Bo Bahnsen, LSU’s senior associate athletic director overseeing compliance, said he is not aware of any NCAA rule the school broke in this regard. Bahnsen has not been notified by the Southeastern Conference or the NCAA of any rule breaking.

“I do not see anything where there was any violation of any NCAA rule that would prohibit us from talking to other schools about working their satellite camps,” he told The Advocate in an interview Thursday.

Since taking the full-time job in November, Orgeron has preached that he plans to “protect” the state of Louisiana when it comes to recruiting. Alabama and coach Nick Saban have been LSU’s biggest competition for players inside the borders, something Orgeron insists he’s focused on stopping.

Orgeron was asked about the satellite camp matter Thursday morning during an interview on ESPN 104.5 FM’s "Off The Bench."

“Let me say this. I love the state. As you guys know, we’re the flagship school,” Orgeron said. “We want to give every player in the state of Louisiana great opportunities. We brought in every state school to come to our camp and recruit their guys.

“We like our guys to come to our camp. We recruit guys to come to our camp. That’s what we do,” he continued. “We’re excited we’ve teamed up with the schools in the state of Louisiana. A lot of guys were offered scholarships in our camps. We’re going to have over 1,000 guys on campus this weekend and 500-700 next week, guys from all over the place, colleges from all over the state of Louisiana that can offer scholarships. What a great opportunity for the boys from Louisiana.”

Satellite camps have been a hot-topic button in college football since Michigan coach Jim Harbaugh began hosting camps two years ago in various parts of the country. The NCAA cracked down on camps this spring, limiting the days coaches can work camps from 30 to 10 and restricting requirements to host satellite camps.

Football Bowl Subdivision programs can no longer host camps at high school facilities or anywhere outside of their state’s borders. However, FBS staffs can work — not host — out-of-state camps, as Texas and Michigan planned to do at Southeastern and Tulane.

Mumme is the first coach to publicly criticize Orgeron and LSU for using its influence in the state to push programs out, but this isn’t only going on in Louisiana, said Todd Berry, executive director of the American Football Coaches Association and the former coach at Louisiana-Monroe.

“There have been other accusations that have been brought up in regards to one university not allowing another university to come into a state,” he said. “I can’t say I’ve seen everything. I’ve not seen anything as public as what’s going on there.”

Berry declined comment when asked specifically about the issue in Louisiana, but he admitted more changes to satellite rules could be coming. He is scheduled to meet with NCAA officials at the end of June to evaluate Year 1 of camps under the new rules.

The AFCA, under Berry’s lead, was the impetus to tweaking the rules governing satellite camps, with high school prospects in mind, Berry said.

LSU is preventing that from happening, Mumme contends.

“It’s absurd to think you’ve got enough opportunities for all those kids. Do the math. I think it’s just this chest-bumping, ‘we run the state’ mentality, which, to me, is absurd,” Mumme said. “I don’t appreciate people that want to put boundaries on the kids.”

“A lot of the times when you have Tulane there, Louisiana Tech there, Louisiana-Monroe, McNeese, they’re just waiting right there for guys if we don’t offer them,” Orgeron said. “Great opportunity for our young men.”

LSU barring out-of-state programs from camping in Louisiana is not preventing those schools from recruiting Louisiana prospects. The NCAA allows periods for coaches to evaluate prospects across the nation.

“The recruiting rule states that during the evaluation process, you have two evaluations to go anywhere in the country to see a prospect you want to,” Orgeron said. “We use that. We do a great job of being very detailed. We go to Mississippi, Alabama. They come into our state. That’s the way recruiting goes.”

LSU blocked Willie Allen from transferring to TCU; source: TCU recruited him while at LSU

Willie Allen, the ex-John Curtis offensive tackle who announced his departure from LSU earlier this month, is barred from transferring to TCU,…