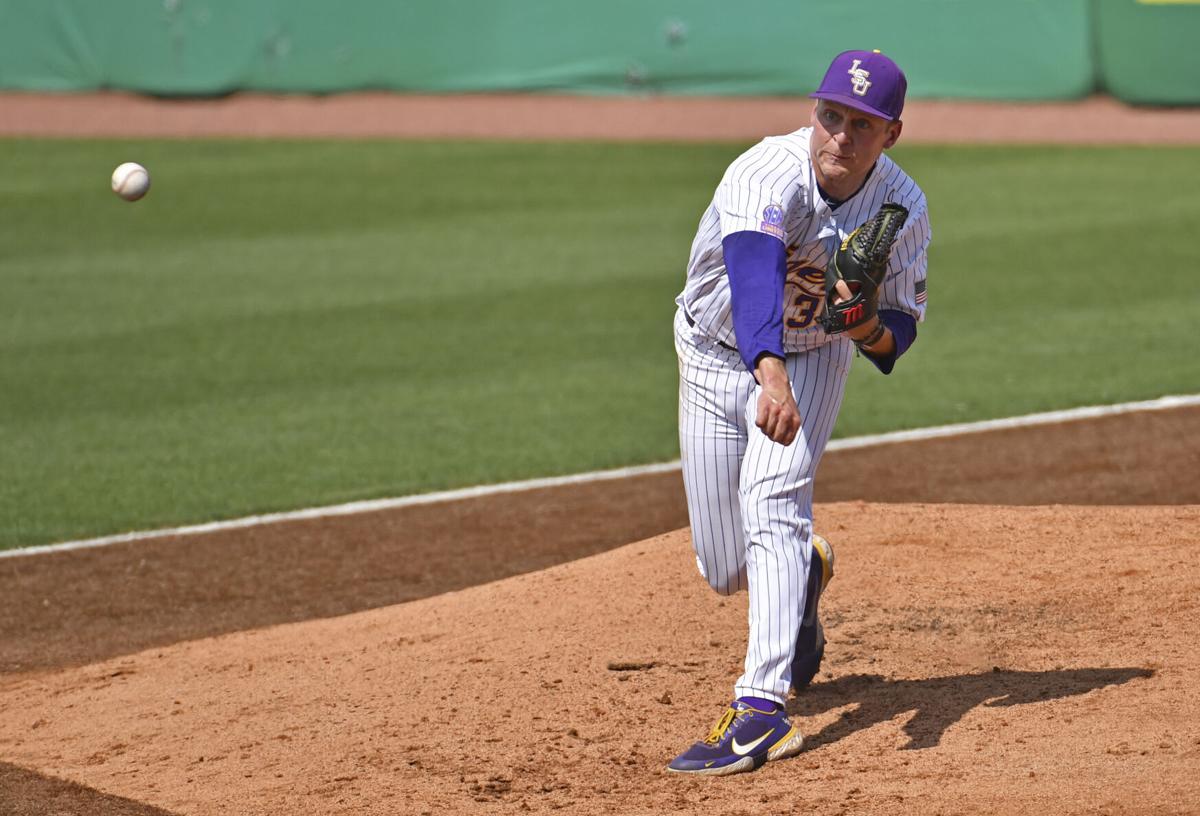 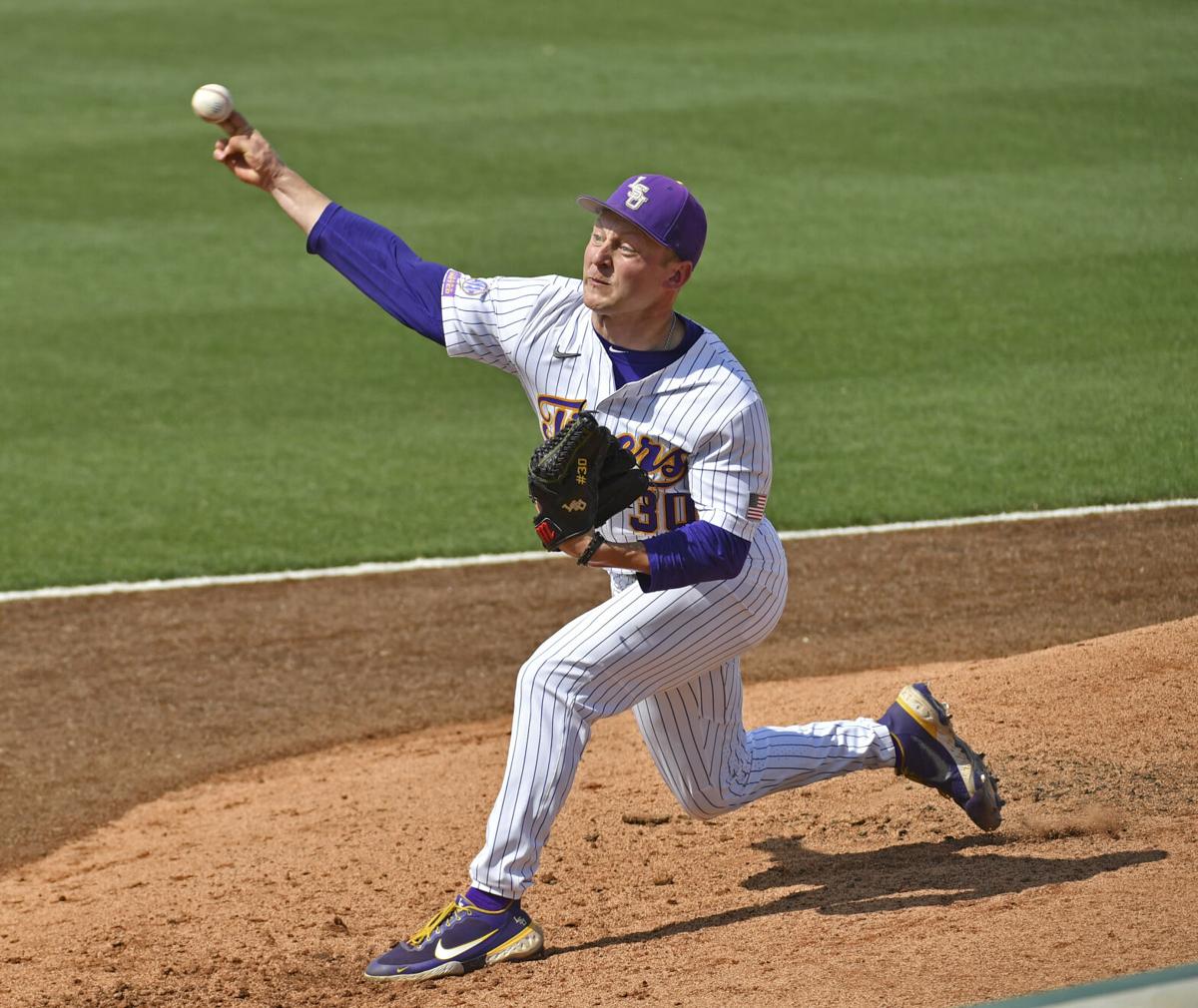 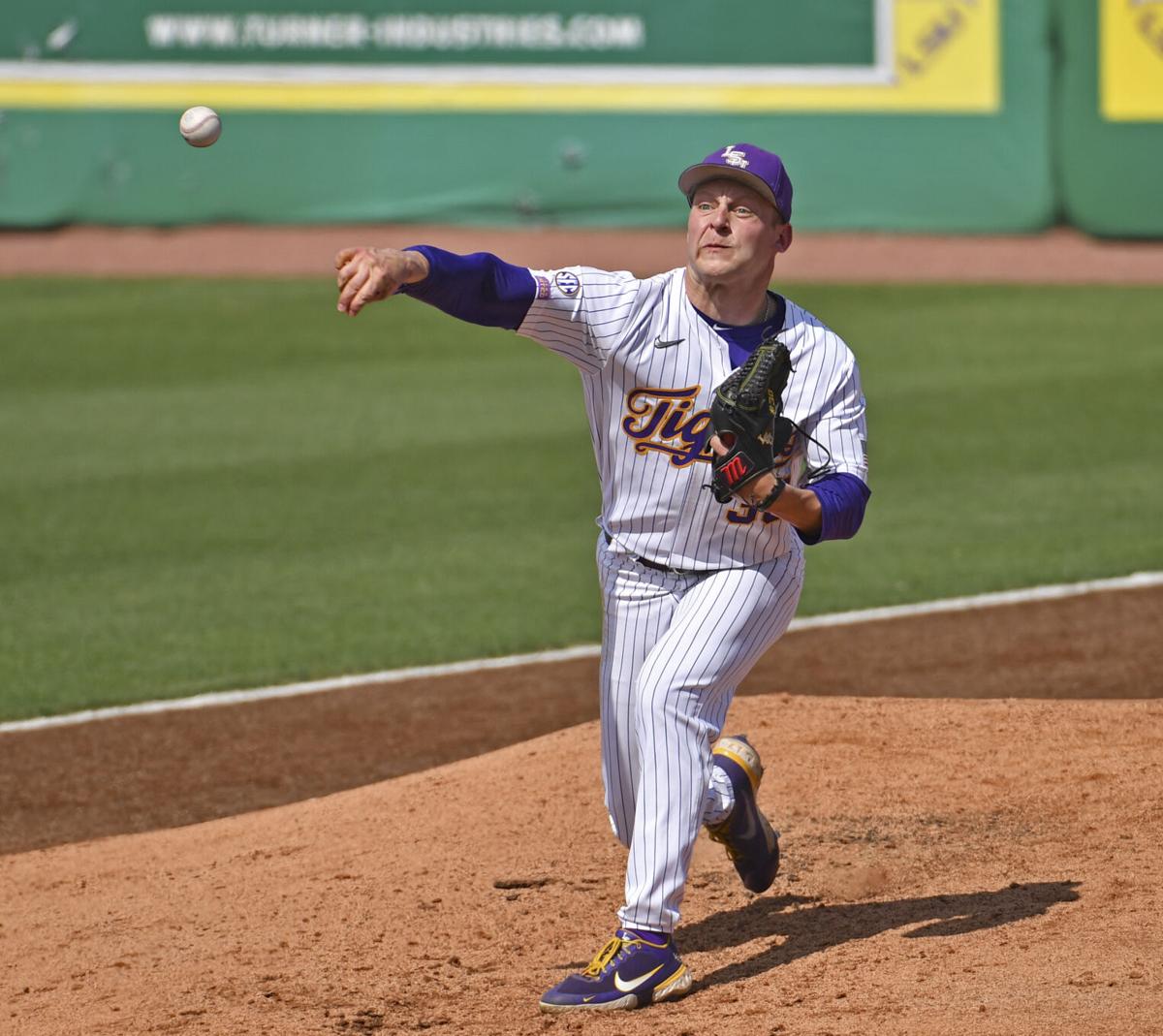 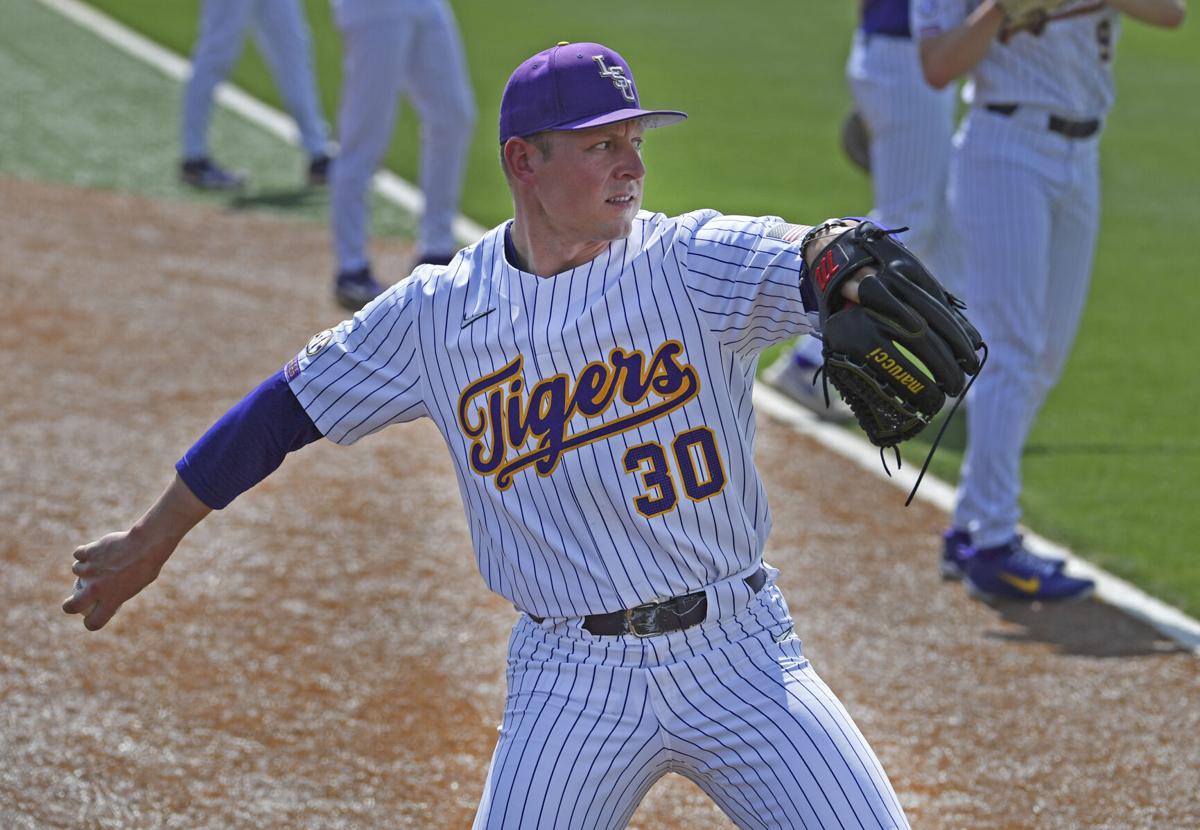 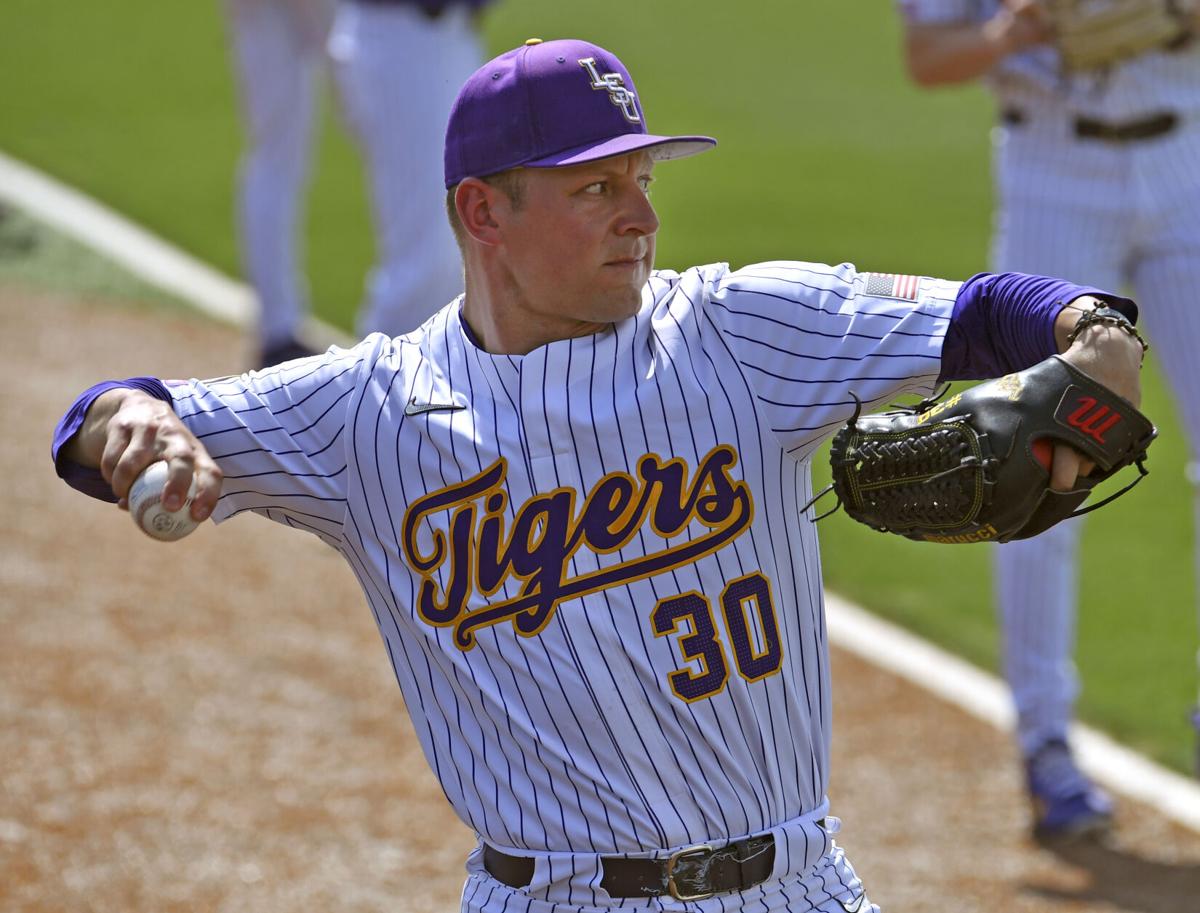 One day back in 2015, six years before LSU travelled to its final regular season series and hoped he could provide another reliable option in a shaky bullpen, Trent Vietmeier sat around talking to his friends when they convinced him to become a volunteer firefighter.

The dad of Vietmeier’s best friend, Nick O’Malley, was involved in a local volunteer fire department outside Pittsburgh.

“‘With all the training you do and you're an athlete,’” Vietmeier remembered O’Malley saying, “‘why don't you try putting your skills to the test with being a firefighter?’”

“All right,” Vietmeier said. “I'll come by, do a couple training things.”

Vietmeier, 16 years old at the time, had already committed to LSU as a pitcher. He played three other sports at Montour High. He spent much of his free time working with his dad’s landscaping company. His dad also estimated he practiced 1,000 shots every day with his bow and arrow.

His schedule seemed packed, but Vietmeier attended a meeting one night at Moon Run Volunteer Fire Company. He then went through a couple training sessions. Attracted by the opportunity to help others, he asked, “Where do I sign up for this?”

Ever since then, Vietmeier has responded to as many calls as possible when he returns home, continued to work with his dad’s company during the offseason and improved as a pitcher throughout his LSU career.

Now approaching the end of his senior year, Vietmeier could be an integral part of the bullpen during a series that will determine LSU’s season. The Tigers left for Texas A&M needing one more win to clinch their spot in the Southeastern Conference tournament and two to give themselves a realistic chance of making the NCAA field.

Who's starting, how to watch and what to watch for as LSU begins its final series against Texas A&M.

LSU has searched for reliable relief pitchers throughout the season and struggled to find them outside of senior Devin Fontenot and freshman Garrett Edwards. Freshman Javen Coleman recently emerged. So did Vietmeier, who allowed one run over his last 10 ⅔ innings.

“I have a lot of confidence in him,” coach Paul Mainieri said. “He's going to be on the mound in some important situations this weekend and going forward hopefully in the postseason. He'll be a critical guy for us, no doubt about it.”

Baseball has always been Vietmeier’s top priority, his passion and the sport he hopes to build his professional career around in some way, but becoming a volunteer firefighter while working with his dad’s company, Country Club Gardens, filled the time he spent away from the field.

Vietmeier began tagging along with his dad, Glenn, when he was 3 years old. He learned over the years how to operate heavy equipment, drive trucks, supervise a team of 30 men, grade backyards and dig swimming pools.

Once he became old enough to drive, Vietmeier’s dad bought him a lifted Dodge Ram 3500 pick-up truck for his 16th birthday. He told his son, “Hey, the truck ain't going to fill itself up with gas,” so Vietmeier regularly worked with the company.

“The first day I went in,” Vietmeier said, “he had me clean the toilets.”

In exchange for his son’s hours, Vietmeier’s dad handled gas and maintenance of the truck. He offered his son money on the side. Vietmeier never accepted.

“I feel kind of bad about it,” Vietmeier’s dad said. “He got the short end of the stick, now that I think back, because he's a worker.”

Over the last month, Drew Bianco has batted .310 (13 for 42) with three home runs while playing spotless defense at second base, and Ma'Khail Hilliard has delivered three quality starts.

All the while, Vietmeier improved as a baseball player, spending parts of his summer on the travel circuit. His mother, a physical therapist, ensured he never threw too much until his body developed. His dad hung a batting cage from the ceiling at the company’s warehouse and bought a removable mound so Vietmeier could practice. Their work days began at 7:30 a.m. and ended around 4:30 p.m. Vietmeier spent the rest of the night on baseball.

“He doesn't sleep at all,” said his mother, Kelly.

Vietmeier became one of the top high school players in the Pittsburgh area, a two-time Post-Gazette All-Area selection and three-time all-section pick at Montour, where his dad coached for 13 years. He received an offer from LSU the summer after his freshman year. He verbally committed the next spring.

Around the same time, Vietmeier joined the Moon Run Volunteer Fire Company, which serves Robinson Township, a suburb of Pittsburgh, as a junior member.

Vietmeier had grown up hearing stories about an aunt he never knew, his dad’s only sister who died when she was 13 because of a drunk driver. He felt compelled to help people in accidents.

As a volunteer, Vietmeier had to attend at least 166 hours of training through the Pennsylvania State Fire Academy, according to Moon Run. He then received two certifications, stopping short of the one that would let him enter a burning building.

“The mom didn't want to allow me to go into a burning building yet,” Vietmeier said. “Maybe someday.”

“No no no,” Vietmeier’s mom said. “No burning buildings yet.”

Instead, Vietmeier has assisted with car wrecks and roll over accidents, as well as other responsibilities at the station. This year, Moon Run has fill 206 calls — 188 for fires and 18 for medical emergencies — according to its website.

“Every call I go on, I know it's life or death for some people,” Vietmeier said. “If it's to maybe get someone onto the next person and do the best that I can to possibly help them, then so be it.”

Once he arrived at LSU in 2017, leaving the fire department and his dad’s company behind for whenever he returned home, Vietmeier underwent thoracic outlet surgery the fall of his freshman year after a blood clot broke off into his lung, momentarily putting him in the intensive care unit.

Vietmeier returned to pitch in LSU’s opening series, but he didn’t become one of LSU’s most consistent relievers until his junior season, when he recorded a 3.38 ERA during the shortened campaign.

This spring, LSU expected Vietmeier to help bolster the back end of the bullpen. Then, he “basically fell to the ground” before a midweek game March 3, his mother said, as his heart rate rose to over 200 beats per minute. LSU initially thought he might have been dehydrated.

Trying to figure out what caused the episode, doctors performed an array of tests. They couldn’t figure out why Vietmeier’s heart rate had suddenly risen to such an abnormal rate and why it wouldn’t go back down. He had to wear a monitor for about seven days. His mother wondered if it related to his COVID-19 diagnosis two months prior, especially after his grandmother died because of the virus in February.

And then the issue dissipated as quickly as it had arrived.

“It was hard to track down an exact answer to what it was,” Vietmeier said. “It's better now, and I know I'm better than ever now.”

Once 7-14 in the league, LSU has won six of its last eight games, putting the team in contention for an at-large bid in the NCAA tournament.

As he returned to the field two weeks later, Vietmeier needed time to readjust to facing hitters. He allowed five earned runs over three appearances, but he slowly regained his form. Vietmeier struck out the side in the seventh inning Tuesday night against Northwestern State, one of the only highlights of LSU’s loss.

With the season nearing its end, Vietmeier may soon finish his college career. He will have options this summer, able to potentially return through the NCAA’s eligibility extension waiver or submit his name for the major league baseball draft. He hopes to play professional baseball one day. He was invited to the new MLB Draft League this summer.

Perhaps a surge here, at the end of the schedule, will help his future as much as LSU’s season.

“I always tell Trent, kind of a motto around here, is, “'You never want to peak too soon,’” Vietmeier’s mother said. “So I think he's starting to peak, and this would be the right time to do it.”

The stakes are raised for the LSU softball team, but coach Beth Torina’s message is the same as her team prepares for the NCAA regional tourna…