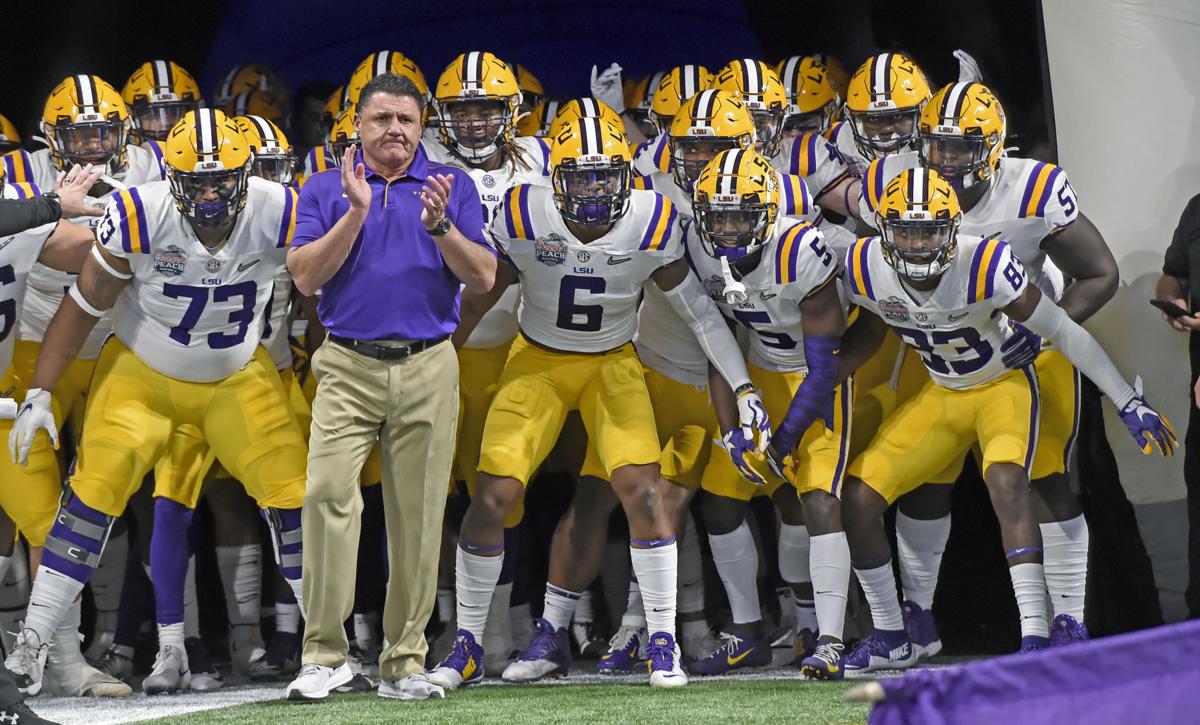 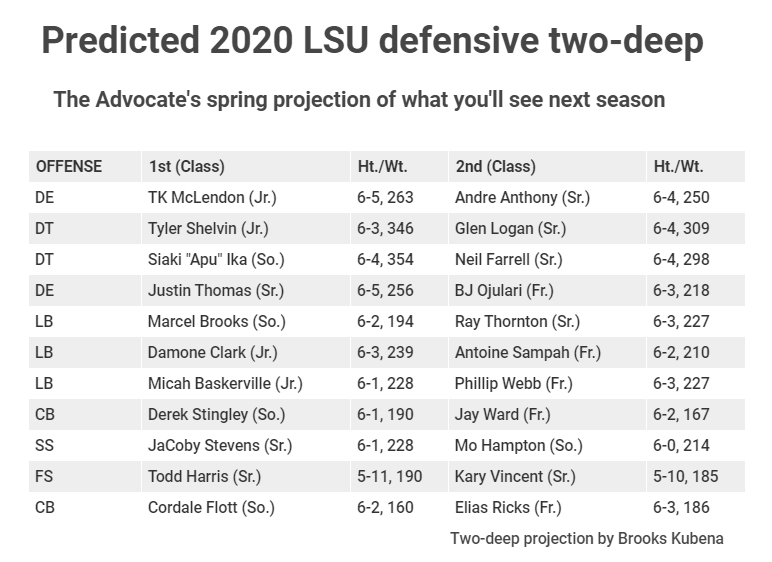 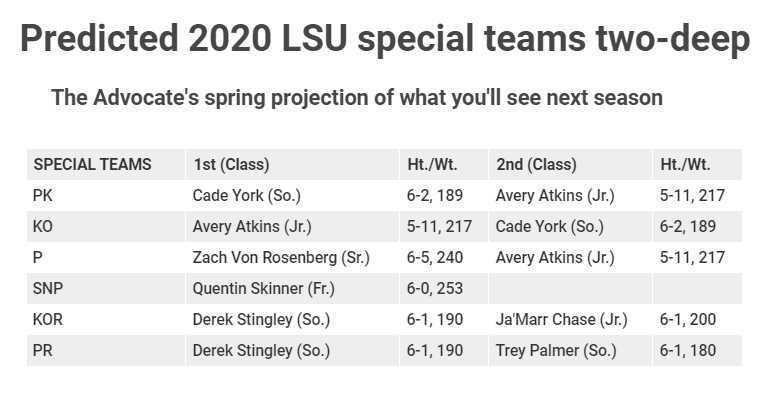 Continuing our projection of the LSU Tigers' two-deep for the 2020 season, we move to defense.

Again, the key word is "project" here, since LSU has eight total returning starters (4 offense, 4 defense) from its 15-0, national championship season, and lot of spots can shuffle, especially since the Tigers will be changing to a 4-3 defensive scheme under new defensive coordinator Bo Pelini.

If you want to return to our projected offensive two-deep, click here.

Note: This has been updated since Ed Orgeron previewed spring football Tuesday morning on 104.5 ESPN's "Off the Bench."

Defensive line: The defensive line is back to a four-man front for the first time since former defensive coordinator Kevin Steele ran a 4-3 scheme during the 2015 season. The timing for a transition away from the 3-4 perhaps couldn't have been better,  since LSU seems to have its deepest talent on the defensive line in several years. LSU coach Ed Orgeron once compared Tyler Shelvin to former SEC Defensive Player of the Year Glenn Dorsey, and last year's nose tackle will have a chance to live up to that comparison, since he'll be a defensive tackle for Pelini, who coached Dorsey in 2007. Shelvin had a breakout season in 2019, and since he and Siaki "Apu" Ika split time at nose tackle, it's likely Ika has the edge for the other defensive tackle position. There'll be plenty of competition at defensive tackle, and Orgeron indicated on 104.5 ESPN's "Off the Bench" that Glen Logan, a two-year starter at defensive end, and Neil Farrell, whose seven tackles for loss and three sacks were the most by any LSU defensive lineman, could both move inside to defensive tackle. Also expect incoming four-stars Jacobian Guillory, Jaquelin Roy, and Eric Taylor to push for playing time right away, although they'll both arrive on campus in June. Depth at defensive end may be one of the more interesting conversations of the spring, since the position will be expected to attack more than it did in the 3-4 scheme. Does this mean former outside linebackers like Andre Anthony and Ray Thornton shift to defensive end? Orgeron said Anthony has, and that "this may be a position change that's helped him." It may not be the same fit for Thornton, unless Thornton (6-foot-3, 227 pounds) has bulked up in the offseason. But, for now, Orgeron said that TK McLendon is at left end and Justin Thomas, who withdrew from LSU for "personal reasons" in October, has returned and is at right end, although Thomas "is a little heavy right now." Expect incoming freshman BJ Ojulari to push for playing time, a player Orgeron said he thinks will eventually be an All-American at LSU.

Linebackers: The Tigers lost all of its usual starting linebackers to the NFL draft, so perhaps its somewhat of a blessing that Pelini will only need to find three to field in a standard lineup. Damone Clark has been high on Orgeron's list for the past two seasons, and he was the team's sixth-leading tackler (50) last season as a backup inside linebacker to Jacob Phillips and Patrick Queen. The path is clear for Clark to take command of the "Mike" position in the middle of the defense, once occupied by former linebackers like Kendell Beckwith. In recent years, Micah Baskerville might have been the second inside linebacker. His experience will likely value him as an outside linebacker, instead of backing up Clark at Mike. Outside linebacker might be a great fit for former five-star Marcel Brooks, a jack-of-all-trades defender who mostly appeared in former defensive coordinator Dave Aranda's pass rush packages in 2019. Orgeron once said Brooks could be used as a multiple-role safety like Grant Delpit, but with JaCoby Stevens returning for his senior season and Todd Harris returning from injury, Pelini will likely find some way to get Brooks on the field. At Marcus High, Brooks was often attached to the box as an outside linebacker in the school's 3-4 scheme, so it's possible he fits in here. If not, LSU has plenty of young depth coming in with four-star linebackers Antoine Sampah and Phillip Webb, although they'll likely need time to develop

Defensive backs: The return of JaCoby Stevens for his senior season was perhaps the biggest news for the team this offseason. With the bulk of the championship team's talent and leadership leaving for the NFL, the Tigers still have their second-leading tackler, who also recorded five sacks and three interceptions in 2019. Starting free safety Todd Harris is back after suffering a season-ending ACL tear last year against Northwestern State. Along with returning nickel safety Kary Vincent, those three players will likely make up the team's safety lineup. Sophomore Mo Hampton, senior Eric Monroe and perhaps even Marcel Brooks could cycle into the rotation, although Orgeron has recently said Hampton could make a run at starting cornerback. Derek Stingley, an All-American in his true freshman season, has his cornerback spot locked up. There'll be a tight competition between sophomore Cordale Flott, incoming five-star Elias Ricks and perhaps Hampton for the other spot. Ricks will miss at least half of spring football after undergoing shoulder surgery, but it's likely Flott already had the upper-hand. "Cordale Flott, to me, is one of the best corners that we're going to have here," Orgeron told 104.5 ESPN's "Off the Bench" in February.

Kevin Faulk is 'still home' at LSU; How Louisiana's legendary running back followed his plan

Below is a chart for special teams, and a breakdown per position follows.

Special teams: LSU's special teams will have a few unfamiliar faces, but it will retain its top contributors. Cade York returns for his second season at placekicker. The former high school All-American made the first seven field goal attempts of his collegiate career, but then he began to lose his rhythm and never really got it back over the remainder of the season. He missed a 46-yard attempt in the Peach Bowl semifinal against Oklahoma, then missed a 45-yarder against Clemson in the College Football Playoff National Championship Game. York is essentially LSU's only option at kicker, since backup Connor Culp entered the NCAA transfer portal in January, and kickoff specialist Avery Atkins is still working on expanding his skills. Atkins will continue to command a 83.97 touchback percentage that ranked third nationally in 2019, and punter Zach Von Rosenberg will return for his senior season. Quentin Skinner will replace Blake Ferguson at long snapper, becoming the third long snapper from Buford High to play at LSU. This may be the year that Derek Stingley takes over all return duties on special teams. Orgeron once compared the phenom to Reggie Bush, and Stingley had some electric plays as a punt returner in 2019. It's also possible that Trey Palmer, who recorded a 54-yard punt return touchdown against Northwestern State, finds some time in the return game.

LSU football in 2020: Who are possible starters on offense? Here are our projections