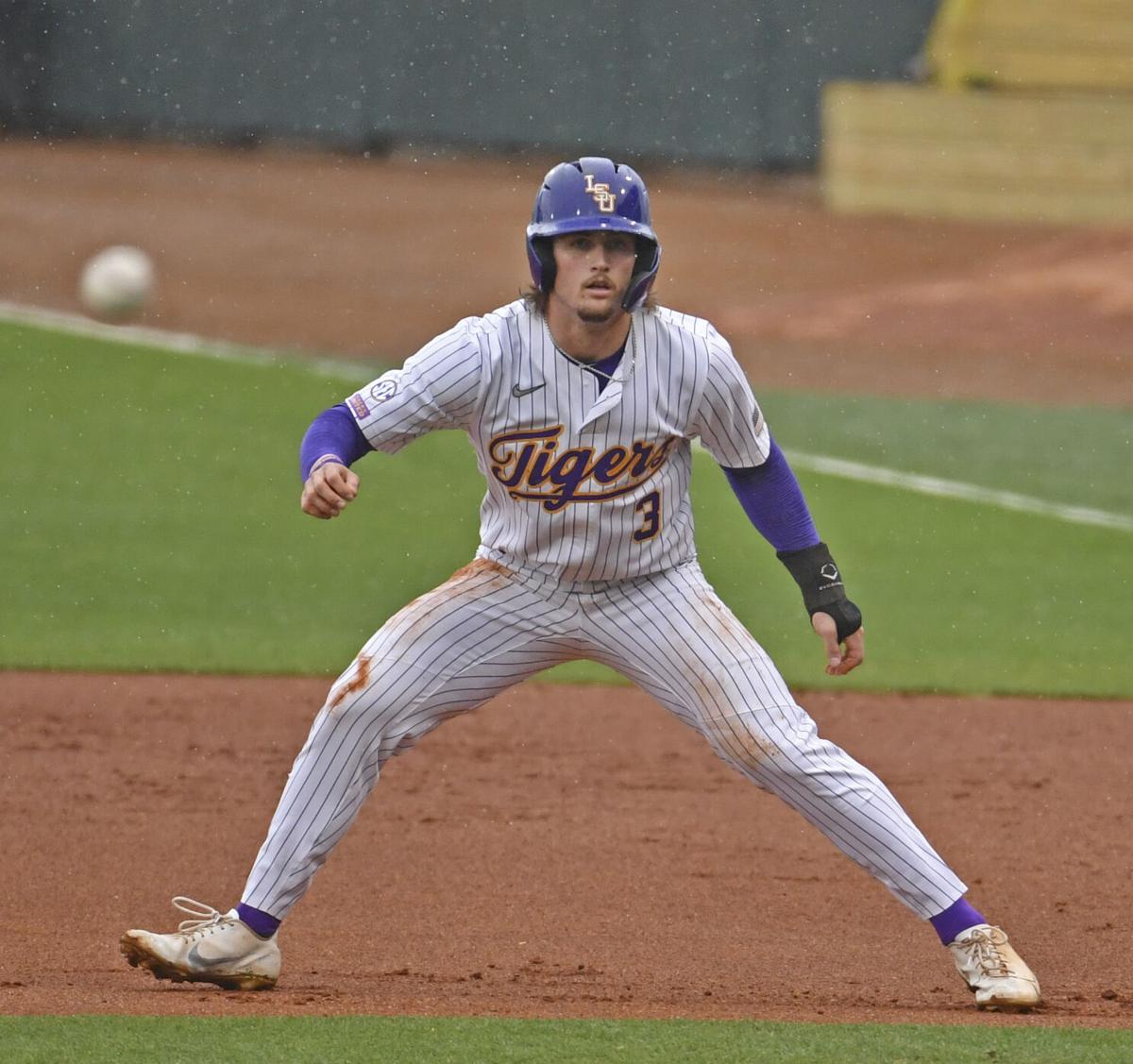 LSU right fielder Dylan Crews (3) follows the pitch from first base against Northwestern State, Tuesday, May 18, 2021, at Alex Box Stadium. 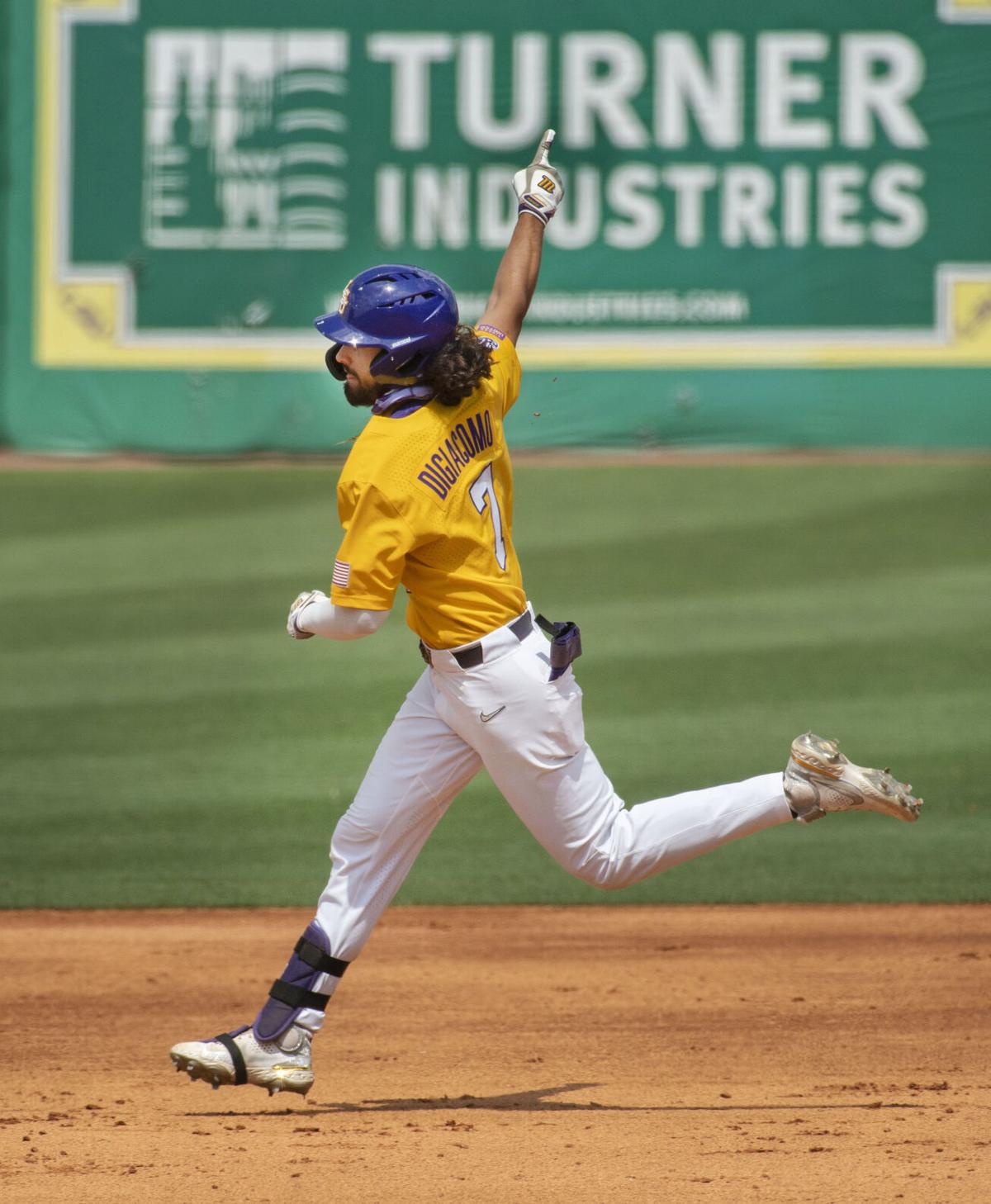 LSU's Giovanni DiGiacomo (7) raises his finger skyward running between first and second base after hitting a three-run home run 407 feet in the third inning of a 13-5 win over Alabama, Sunday, May 16, 2021 at Alex Box Stadium. 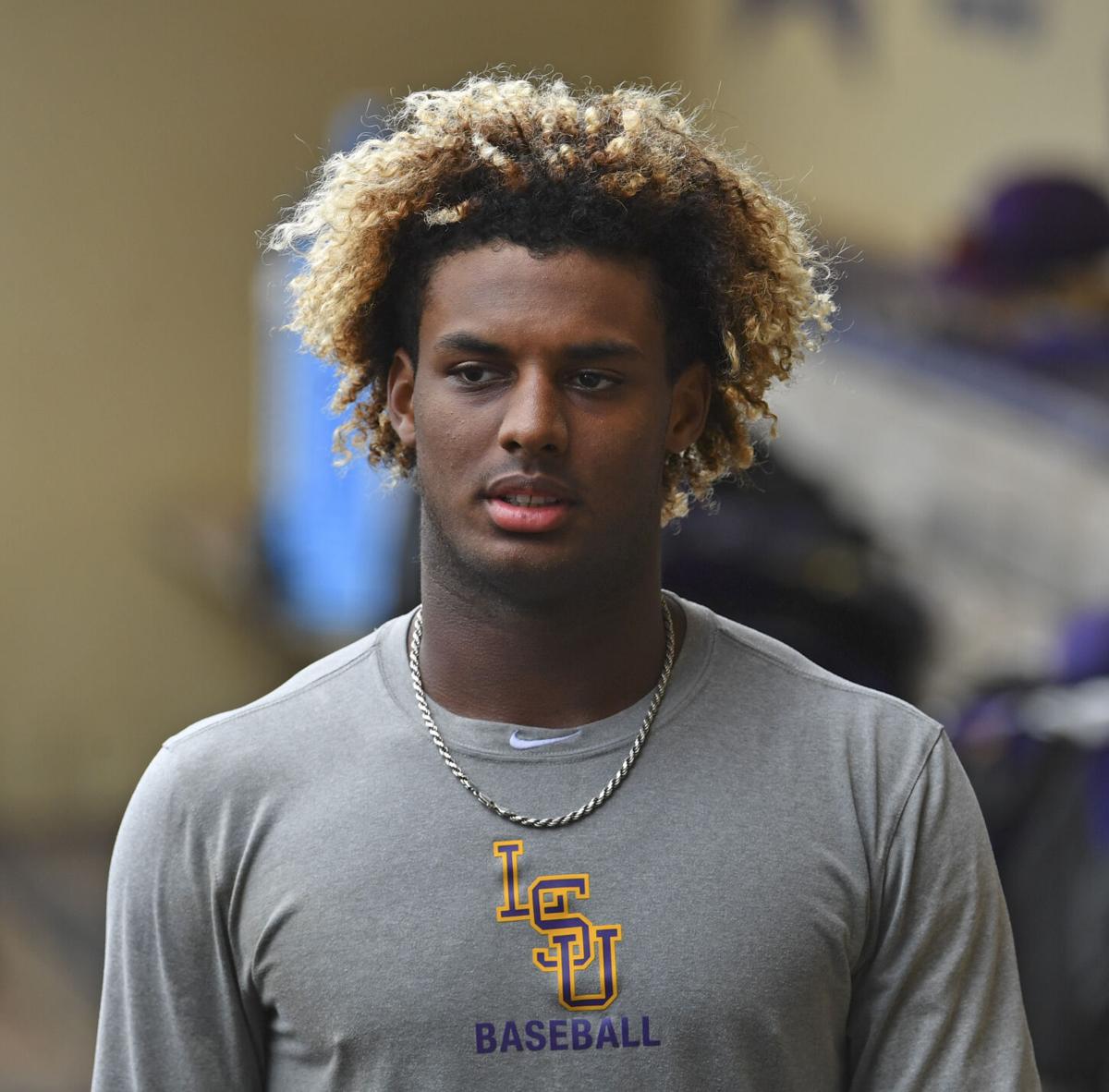 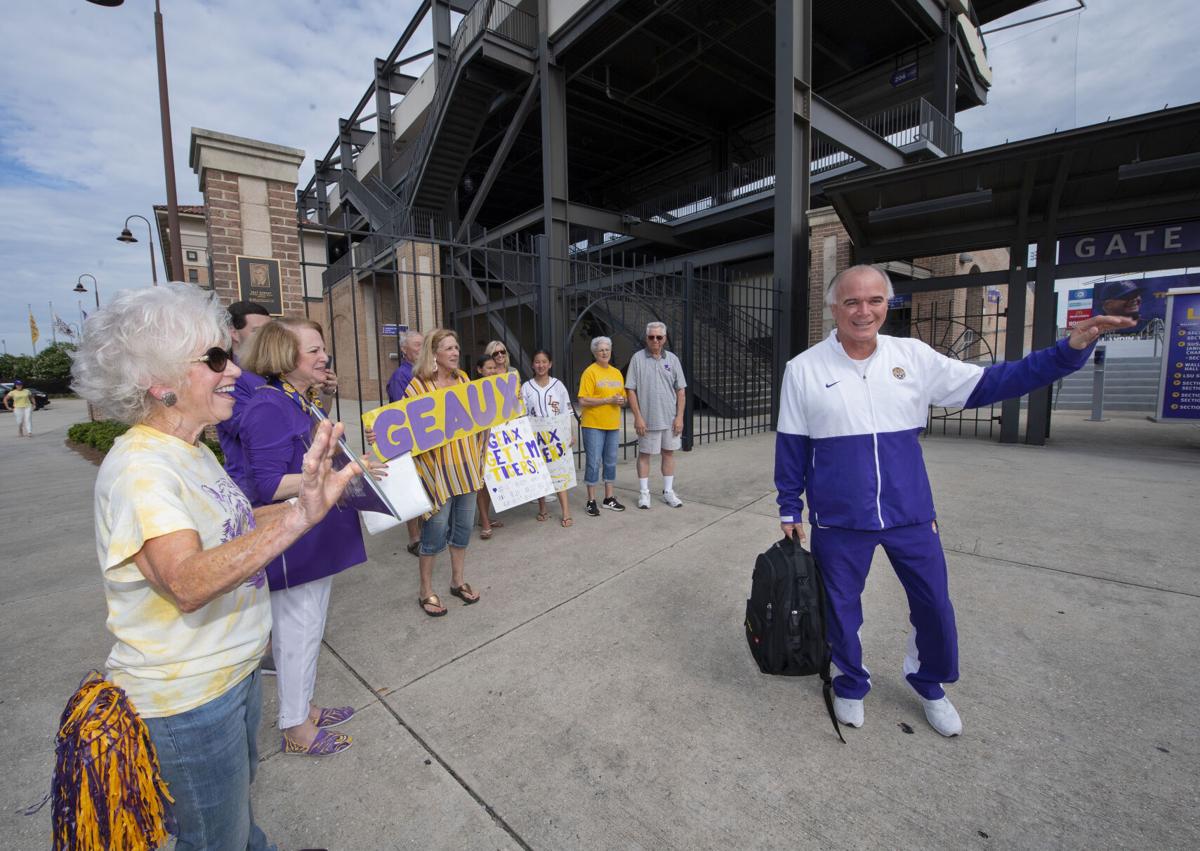 LSU coach Paul Mainieri waves at supporters including, from left, Chrystal Musgrove, Susan Lipsey and Joy Hammatt, as he leaves Alex Box Stadium on Wednesday morning, June 2, 2021, for the team's trip to the NCAA regional in Eugene, Ore.

LSU right fielder Dylan Crews (3) follows the pitch from first base against Northwestern State, Tuesday, May 18, 2021, at Alex Box Stadium.

LSU's Giovanni DiGiacomo (7) raises his finger skyward running between first and second base after hitting a three-run home run 407 feet in the third inning of a 13-5 win over Alabama, Sunday, May 16, 2021 at Alex Box Stadium.

LSU coach Paul Mainieri waves at supporters including, from left, Chrystal Musgrove, Susan Lipsey and Joy Hammatt, as he leaves Alex Box Stadium on Wednesday morning, June 2, 2021, for the team's trip to the NCAA regional in Eugene, Ore.

For the moment at least, all the sentiment surrounding LSU coach Paul Mainieri’s imminent retirement has been swept up, bottled, corked and tossed into the Pacific Ocean off the rocky Oregon coast west of Eugene, the Tigers’ launching point in this eagerly awaited return of the NCAA baseball tournament.

Careers are finite. Now it’s time to get back to the eternal business of balls and strikes, hits and runs, outs and errors. To get back to the basic question that consumes all this time of year:

Can LSU win the Eugene regional and advance to the next knockout round?

LSU vs. Gonzaga, Friday in NCAA regional: Who's starting, how to watch, what to watch for

Who's starting, how to watch and what to watch for when LSU plays Gonzaga in the first game of its NCAA regional.

The Oregon trail that led the Tigers (34-22) to this point has been a rocky one indeed.

Pitchers Matthew Beck and Jaden Hill were lost for the year. So was Hayden Travinski, LSU’s preferred catcher because of his bat. Center fielder Giovanni DiGiacomo has been receiving annoying little text messages from his hamstrings all season long. Cade Doughty missed a week of games because of injury, Gavin Dugas played through a scary late-season outfield collision with Drew Bianco (the kid’s a tank), and the middle infield has been one constantly reshuffled deck of cards.

But, finally, at postseason’s brink, the Tigers may be their best version of themselves. Or at least they’ve best figured out how to patchwork their way around their problems. Right now, I’m picturing Mr. Scott on “Star Trek” rerouting some wiring to restart the warp drive and keep the Enterprise from crashing into the planet.

“At this point we’re at now you figure out what your strengths and limitations are,” Mainieri said Thursday, as the Tigers took the field to practice for Friday’s 9 p.m. CDT regional opener against Gonzaga. “The key is putting guys in position to accentuate their strengths and hide their weaknesses.

“Of course, that doesn’t guarantee anything. Hopefully the young men we put out there will play well and loose and go out Saturday and play well (again).”

Coaching changes can create significant amounts of roster turnover, but whoever becomes LSU’s next baseball coach will at least have Dylan Crews.

If confidence counts for anything — and this time of year it definitely should — LSU’s players believe they are sharpening to their best edge right now. To wunderkind first baseman Tre’ Morgan, LSU’s disheartening early exit from the SEC tournament because of a 4-1 loss to Georgia may have carried with it the proverbial silver lining.

“Those days were definitely big for us,” Morgan said of the extra rest the Tigers got before leaving on the proverbial jet plane for Oregon. “We got a couple of key guys back. We’re coming here with a healthy lineup. And I know when we’re healthy we can play with the best teams in the country.”

The Tigers don’t have to think so grandiosely just yet. They just have to beat the three teams in their regional — Gonzaga, then either host Oregon or Central Connecticut State — and see what the next stage of the NCAA tournament will bring. By no means an easy test, but frankly the selection committee could have dispatched LSU to a tougher regional than this. A regional that can’t pose any worse problems than the SEC foes the Tigers left back east in the nation’s No. 1 RPI conference.

Mentally, at least, they sound ready to pounce.

“I’m very confident,” freshman right fielder Dylan Crews said (ah, the brashness of youth). “We’ve got a bunch of guys back in the lineup. I feel when we have everybody, we’re a very dominant team and can beat anybody.

“We know Landon (Marceaux, Friday’s starter) and the rest of the starters will perform. It’s up to our hitters to put the ball in play. To stick to our plan and approaches.”

'We're a threat': LSU regional opponent, Gonzaga, determined to 'prove' its worth

In its first NCAA tournament game, LSU will play Gonzaga, a team that nearly hosted a regional itself.

The Tiger hitters will definitely need to be disciplined at the plate against Gonzaga starter Alek Jacob, the West Coast Conference pitcher of the year (7-1, 2.82 earned run average). The tall right-hander is described as not possessing a fireball arm but as “unorthodox” and “crafty.” Unorthodox and crafty have traditionally been Kryptonite to LSU hitters. Perhaps this time will be different. Mainieri, for his part, has been crafty and coy about his lineup, which he’s expected to infuse with a couple more left-handed bats.

Doing that may come down to the Tigers having a belief that they will do just that.

“We’ve got to play every game like we deserve to be here,” Morgan said.

And that who they have to play with is good enough to do the job.

Our Views: For LSU and Louisiana, some feel-good stories from post-season baseball

When Paul Maineiri announced last week that this would be his final season as LSU baseball coach, nobody knew for sure whether he had actually…